Here we go…at last…my Halloween 2012 bringing it all together post! Thank you for being patient with me!

Whilst this week has been crazy preparing all the last minute things for my sister and brother-in-law’s wedding on Saturday afternoon, I’m taking some time out today to do some things for myself – like a little blogging, a little gaming, a little Zumba-ing and even having a rest after an eventful and sleepless couple of days!

So, on with our Halloween this year! If you are a regular reader of my blog, you’ll know that we, as a family have had a lot going on, with one sister having a baby, and another getting married, plus decorating…a big party for my favourite holiday of all time was just out of the question… 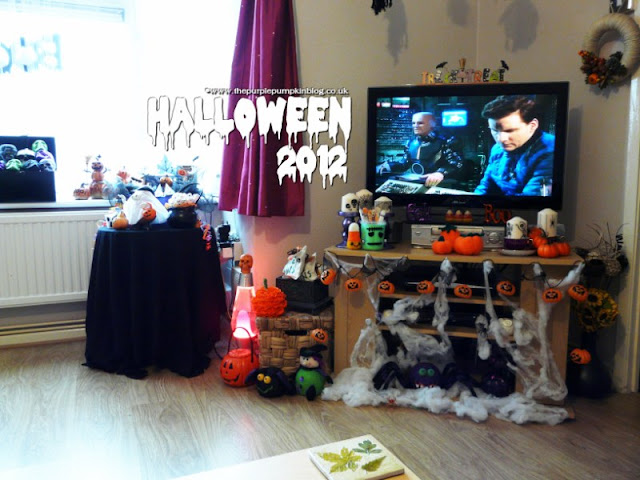 As the big day drew ever near I realised that not doing something for Halloween was just futile and a quick text to my sisters a few days before saying “did you wanna come over for Halloween, just making some soup” followed by “it’s Sephy’s first Halloween after all!”, and replies of “yes, what time”, meant that I actually kicked my last minute shindig organising butt into gear and got bus-ay!

First on the agenda was getting the room decorated, which Liam helped me with whilst we had Red Dwarf on in the background! He was a very helpful helper – he’s been brought up to love Halloween as much as we all do!


I didn’t go quite as crazy this year – a lot of the decorations that I have stayed in their boxes, but I put out as much as would fit!!

I made a giant spider’s lair underneath the TV using cobwebs, a light-up spider decoration and a couple of purple pumpkins! You can just see them in the right of the picture below! 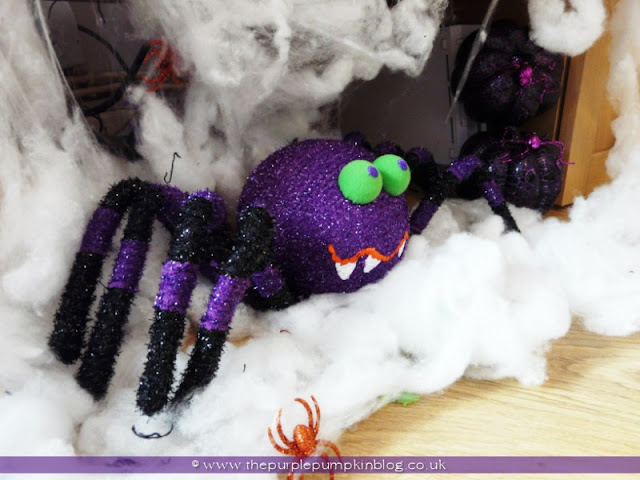 I then tied some organza in between my pumpkin lights to pretty them up a little bit as wire is so boring to look at, and hung those on the front of the TV unit. These pumpkin lights are new this year :)

On top of the unit went some of the decorations that I made myself this year, including my Halloween Candles which sat on top of the candlesticks I decorated with organza bows.

There was also one of my Wool Woven Candy Pots that had the candy removed (or rather eaten already!!) and replaced with the Halloween Decorated Cutlery I made a couple of days before.

My Amigurumi Crochet Candy Corn is on guard! He’s such a cutie!

On top of our VCR (yes, we still have one of those – it lifts the TV up a bit hahah!) went a couple of decorations that I bought in the USA in 2011, and sat in front was my trio of Amigurumi Crochet Pumpkins

I had a couple of candles spare, so that sat in some purple teacups that I bought from a charity shop, and in the background you can spy my Microfibre Monsters waiting to launch an attack! A couple of plastic pumpkins finished the set up here.

With the TV unit area decorated, it was onto our bookshelf unit in the other corner. I love this unit, it holds so much stuff!!

My Yarn Wrapped Boo sign got hung up – I’m so proud of this craft – I just loved how it turned out! And you can also see my Mummy Candle Jars. For safety, I used battery operated candles.

Let me go through a few more of my decorations!

Here’s my Handpainted Ceramic Pumpkin Pot, which I just love! Sitting next to it is a little Halloween bunny rabbit that a penpal of mine made for me a long time ago out of clay – he came all the way from her in Minnesota, USA – he’s so cute! On the other side is my Pumpkin Mickey Mouse Vinylmation which hubby surprised me and bought from eBay.

Here are my Vintage Tin Cans which I made in September, and just missed out on Crafty October! Standing in front is another decoration from the US (all of which I bought in Michaels in 2011), a lil’ Frankie, trick or treatin’ and another pumpkin sitting in the top tin can!

More US bought decorations in the form of the gravestone and the skeleton trick or treater. The Winnie the Pooh in a pumpkin outfit I bought in 2000!

I didn’t take a photo of him by himself this year, so here’s one from last year!

I also put out my sweet little witch, which I forgot to take a photo of lit up, so underneath the following photo is one from last year too!

The final area of our living room that I always decorate is the window ledge…it looks like Halloween barfed over here! I also placed a table in the corner to put all the trick or treating goodies.

You can see my Felt Ruffle Pumpkin, which I moved later on, and I’m not sure what that microfibre monster is doing there lol – keeping his beady eye on the cat in the fish bowl I think!

Speaking of the cat in the jar, I stacked two small fish bowls on top of each other and filled the top one with all the tiny decorations that I have.

Three potion bottles – I bought these from the USA – I really love these!

And another bunch of pumpkin ornaments – all the way from the US of A. Another lot of favourite decorations that I have.

This is a close up of the Trick or Treat table… Mr. Potato Head dressed up as a ghost :) …along with my cauldron of Lollipop Ghosts and Trick or Treat Candy Tubes which were all placed in the tub that I decorated. The kids that came knocking on Halloween night enjoyed picking out what they wanted!

In the background you can just see my Halloween Photo Frames.

The pumpkin in the front is my first ever and oldest Halloween decoration that I bought in 1989!

I put my Bags O’ Brains in a chest that I have, and then decorated around it with my lava lamp (awesome decor – I love it!), a skull candle and my felt ruffle pumpkin.

Also on the window ledge sat my framed Halloween Subway Art that I shared, and I placed some purple faux roses in another fish bowl I had.

As well as all the Halloween decorations, I also put together some autumnal decorations to put out in the hallway…I filled a wooden box with pinecones, [plastic] toadstools, berries, acorns and squash.

I used the rest of these decorations (as they didn’t quite fit) to fill up a tray around some candles. The candles sat in some holders that I made last Halloween.

Something else that I made for Crafty October, but haven’t gotten around to blogging about was these coasters made from tiles and leaves. I will be sharing this soon!

I put my Munchkin Pumpkin Tea-Light Holders in a row on the coffee table and scattered some black, clear and orange gems around them.

With the inside now all decorated, it was time to turn my attention outside. So I placed some cobwebs over the bushes until I ran out of them!

My Squashed Witch met her fate under the door step! And I added some more tombstones in the front garden.

I hung my Trash Bag Halloween Wreath on the door, and staked some shepherds crooks in the soil from which I hung some orange lanterns.

I also set out my Tin Can Luminaries, it was so windy on Halloween night though, and they kept blowing out!

I mustn’t forget my Milk Bottle Ghosts! The kids loved these! So much so that a few went walkabout!!

And last, but by no means least were 2012’s pumpkin carvings! This year I carved the Cheshire Cat and The Mad Hatter – I think they turned out great, and every one always compliments my pumpkin carvings each year!

With the house all decorated, I turned my attention to getting some food ready for the evening. I made Twinkie Mummies, No-Bake Oreo Truffles and Oreo Cookie Pops

With sweet stuff taken care of, it was time to make some savoury goodies in the form of Corn Dog Muffins and Cheesy Chilli Cornbread – both which went down a real treat with some [canned] tomato soup (I ran out of time to make the planned pumpkin soup!) and some bratwurst hot dogs.

I had just enough time to apply some heavy make up and put on my Halloween mini top hat! Trick or Treaters started knocking from about 4:30 as it was starting to get dark – it’s lovely to see all the little kids dressed up. They always know that they can safely come to our house and get some sweets on Halloween! I think my outside decorations always give it away!!

When my guests showed up around 6:30 they said “I thought you were just making soup?!?” They knew I wouldn’t not be able to something special for Halloween!! They were right – I think I relish in doing the best I can do – time irrelevant – when it comes to hosting a get-together.

Our little pumpkin, Sephy slept all the way through her first Halloween party, and here’s my son holding his newborn cousin – a lovely photo for their grandparents!

My sister who is getting married this Saturday having tiny pumpkin cuddles!

And super proud Aunty Shellbe (that’s me lol) holding my niece in the outfit I bought for her.

And that’s a wrap for Halloween 2012! I’ve had so much fun crafting and preparing, even though it’s been a crazy month I would do it all again in a heartbeat! I plan on a big party in 2013 to make up for the little gathering for this year!!

Hope you all had a fun Halloween and hopefully I’ll have given you some ideas for your next party!