As a girl with Greek-Cypriot and Lithuanian heritage, I grew up in a household with different kinds of foods. Many Greek dishes take me back to my childhood, holidaying with my family in Cyprus…I have so many favourites, and these Easter cheese cakes from Cyprus, called flaounes are one of them. 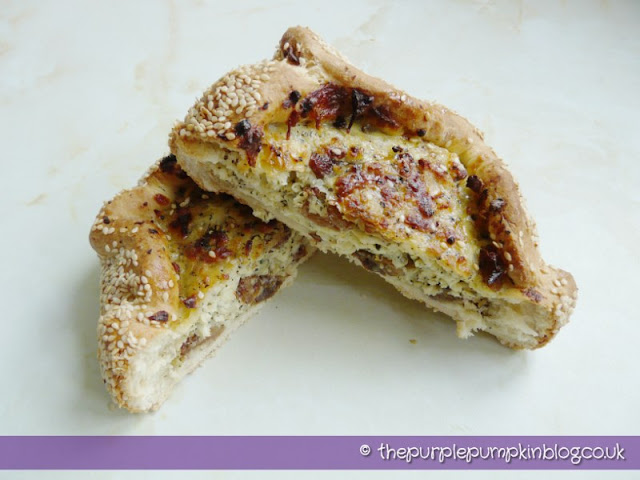 I don’t often get to eat them as it means a drive to North London where there is a large Greek community to buy them…so I thought I would dig out my Cypriot cook book and try and make them myself.

To those that know what these taste like, I think I did a good job! My dad, the real chef of the family, and Greek Cypriot, gave them the big thumbs up and said he won’t be paying £2 a go for ONE any more if I can make them ^_^ 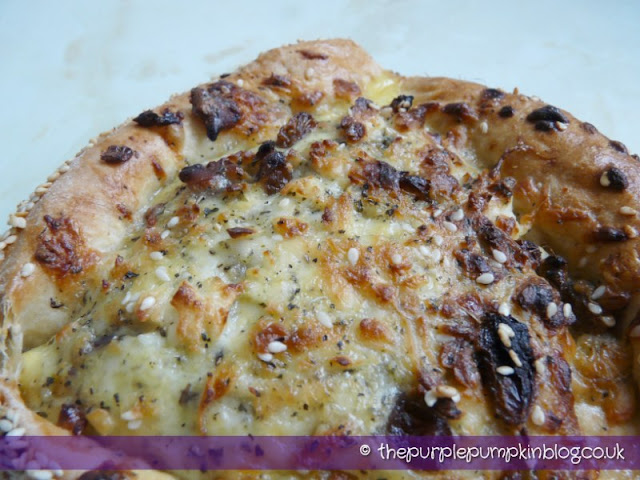 To those that don’t know what these taste like, it’s hard to describe. The filling contains cheese, eggs, sultanas, mint and is surrounded by a bread dough which has masticha in (probably spelled wrong, I just know how to say it!) which is a resin from pistacia trees. 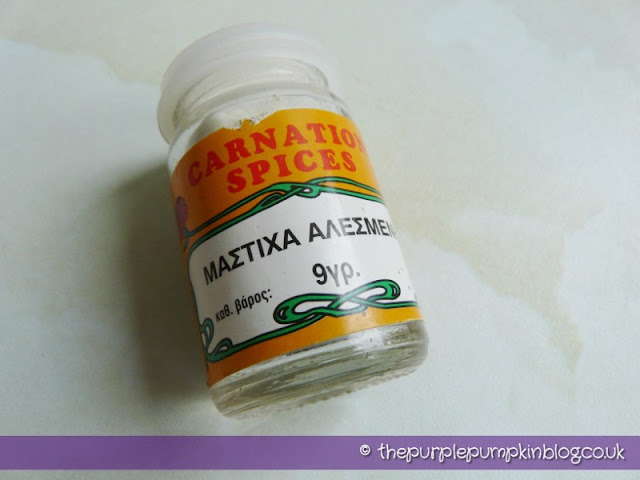 I have got a little pot of powdered masticha that my dad brought home from Cyprus for me. You can also buy it in little crystals that you then pound down to a powder. Here’s a Wiki link that will tell you more about it. I don’t know if you can buy it outside of Cyprus…you may find it in Greek grocers if you have one near to you…but if you can’t find it, you can leave it out – you won’t know the flavour that you’re missing from it, so you won’t miss it (IYKWIM!) Although, I have just found masticha on Amazon, so well worth buying for the authentic taste!

I took this recipe from a very old Cypriot cook book that I bought in Cyprus maaaany years ago. I have adapted it slightly so that I can share it, as the recipe book was obviously written in Greek and then translated (poorly) to English.

Before I tell you how to make flaounes, let me talk to you about cheese. On the island, you can buy a special flaouna cheese which is used when making these cheesecakes. A good substitute is mild cheddar cheese. I also used halloumi cheese, which is a Greek Cypriot cheese made from goat and sheep’s milk. You can buy halloumi quite easily in supermarkets these days (in the UK at least). Make sure you buy the plain one, rather than any that might come flavoured with chilli or pepper.

The full recipe is at the end of the step-by-step guide.

When making flaounes you start with the filling as you need to leave that for a few hours (or even overnight). To make the filling you’ll need halloumi and cheddar cheese, eggs, dried mint, sultanas and baking powder. 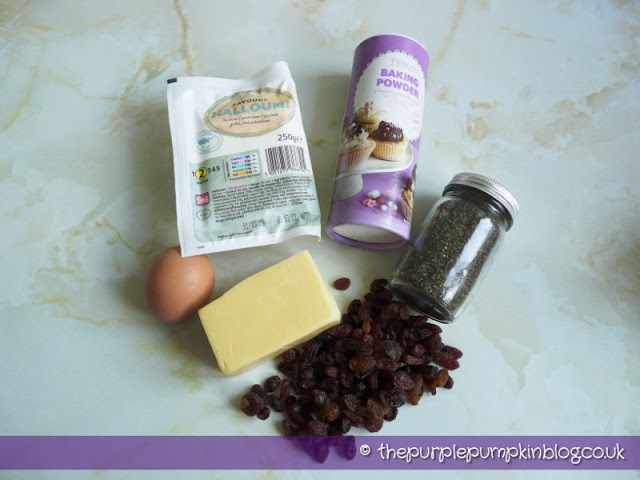 Grate the cheese, finely is preferable, into a bowl. 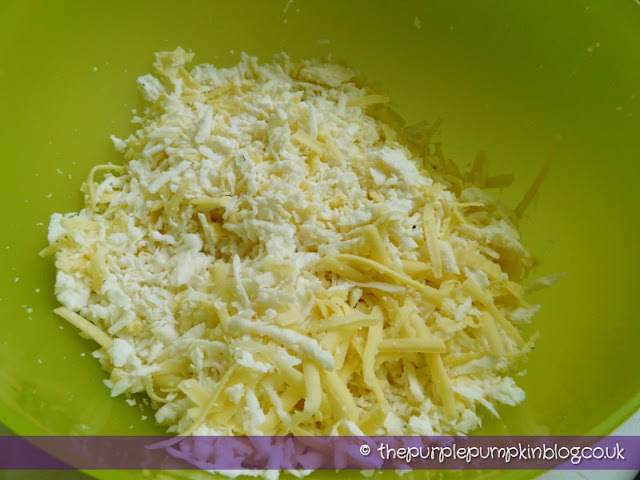 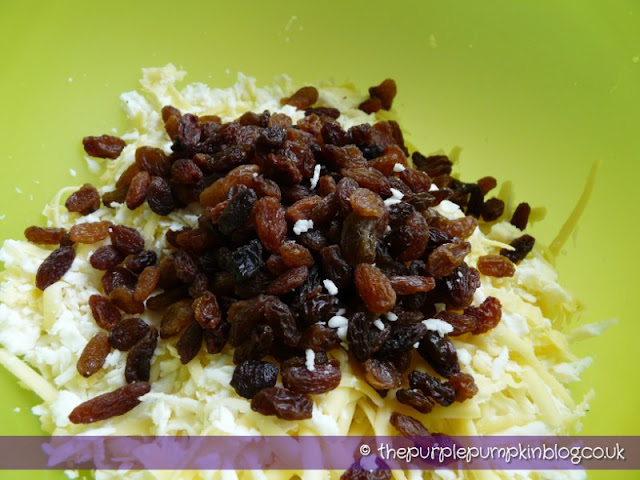 Add dried mint. I rub the mint between the palms of my hands to pound it down further. 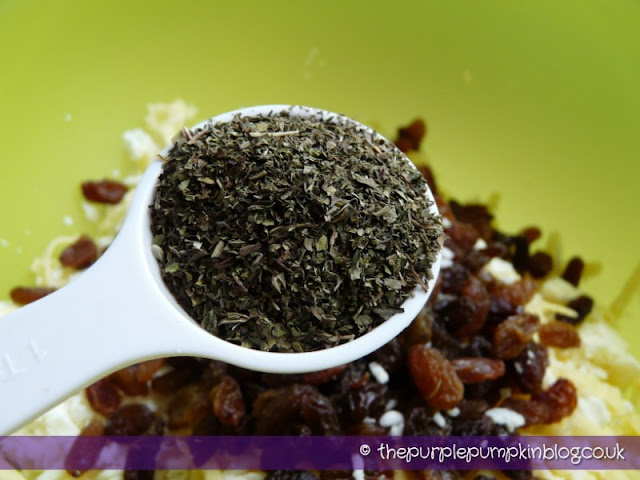 Whisk up a couple of eggs and add it to the bowl and then stir everything together. 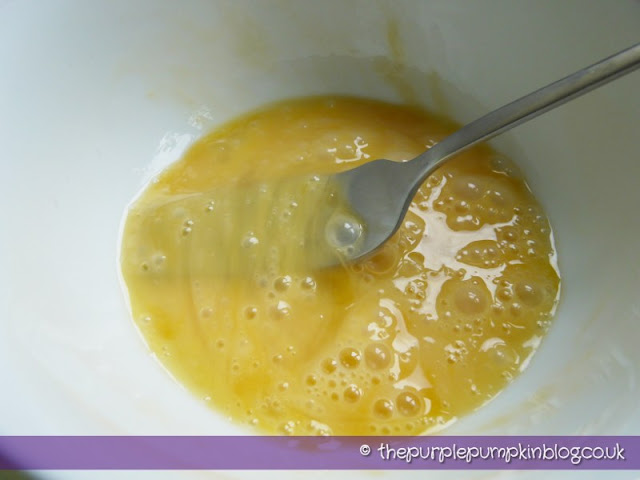 Cover with a cloth and put in the fridge until needed.

A quarter hour before using the filling, add some baking powder. (I actually forgot to do this part and I don’t think it made a difference!) 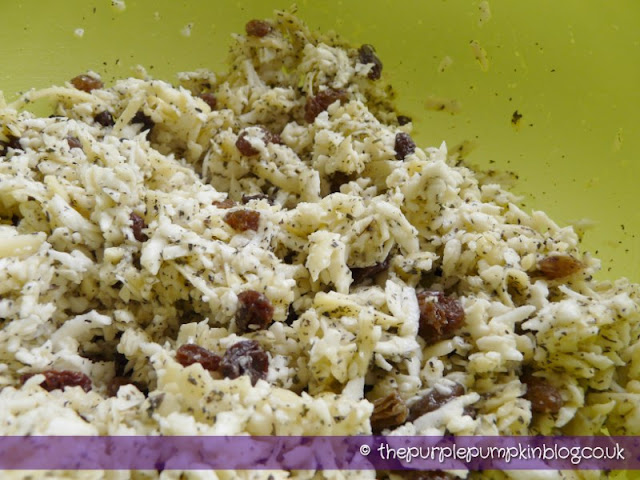 Now for the dough… 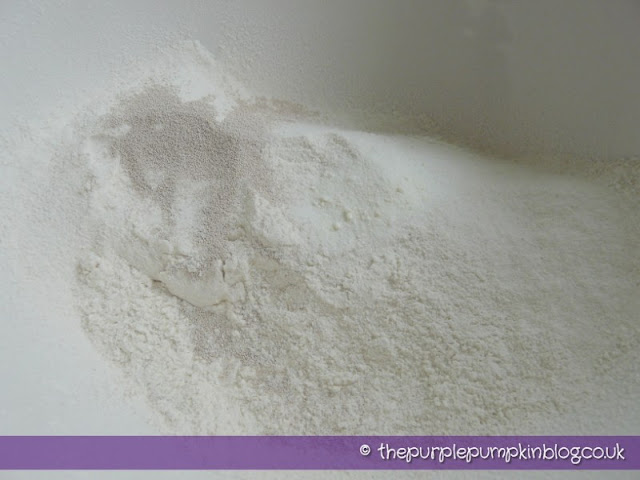 You then add melted butter and mix. 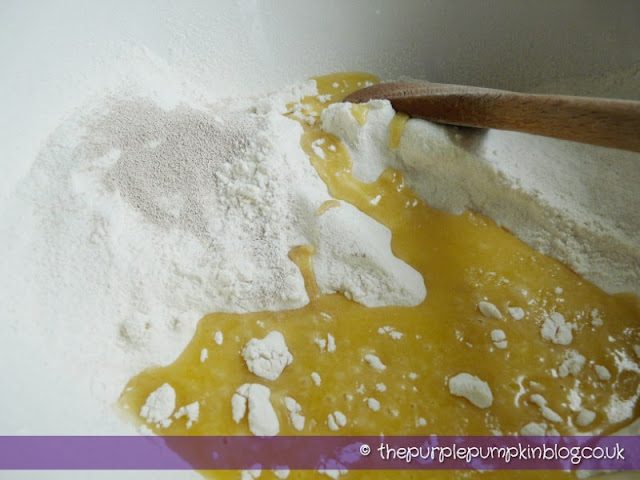 You then add one egg and mix again. 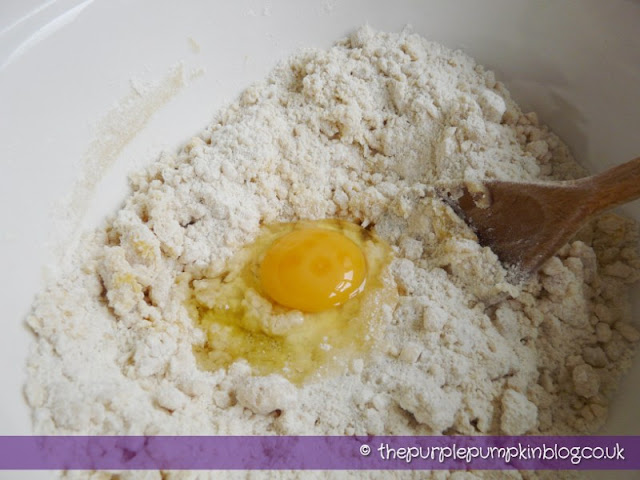 Another egg goes in, with warm milk and water and mixed again – it will start coming to a dough now, so get stuck in with your hands to form the dough. 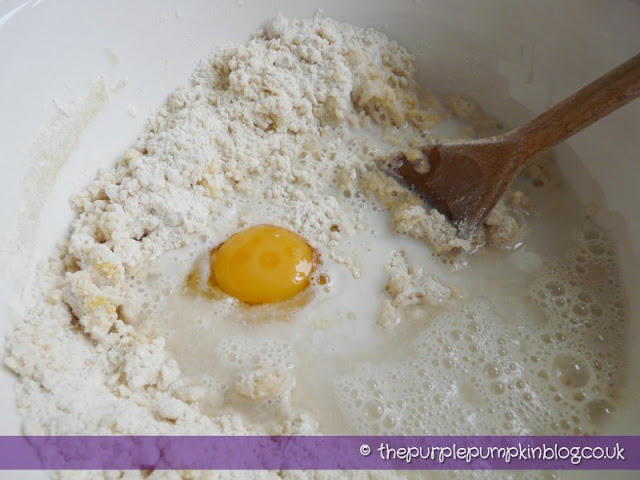 If a little sticky, add some more flour until pretty much everything comes away from the sides of the bowl. Cover with a cloth and leave to rise for an hour. 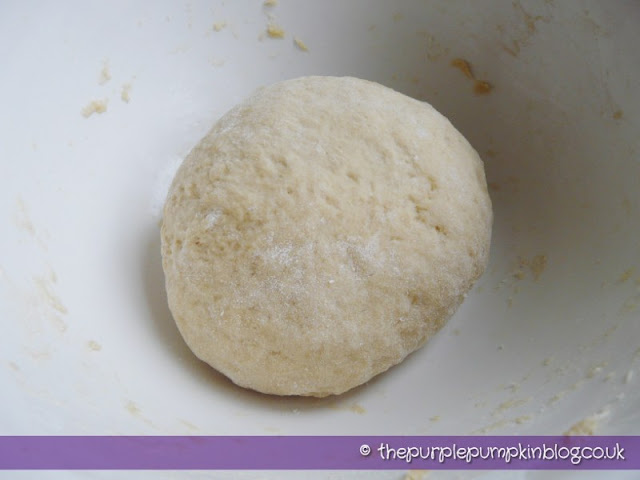 The dough doesn’t massively inflate, but there is a rise to it and the dough ball does become visibly bigger. Divide the dough into 6 smaller balls and roll out into circles (ish) about 7″ across. The dough is quite elastic so often springs back on itself, but persevere! 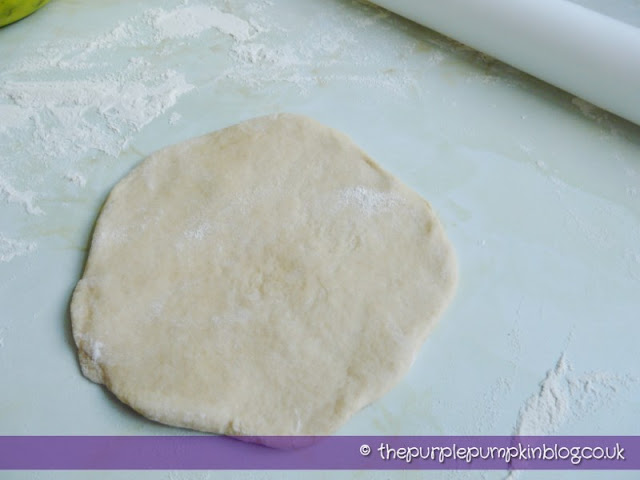 Pour out some sesame seeds onto a large plate – you will be covering the outside of the dough with them. 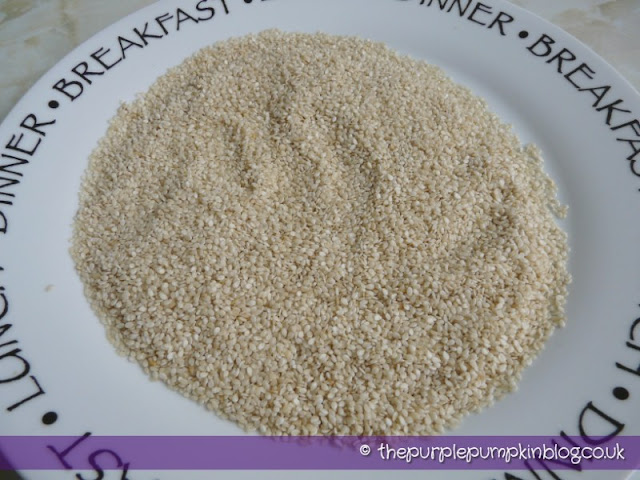 Brush the surface of the rolled out dough with some beaten egg and put the dough, egg washed side down into the sesame seeds. 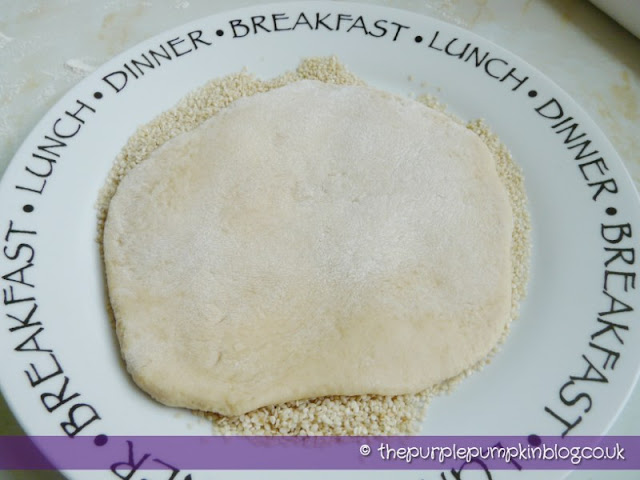 Remembering to stir in the baking powder into the cheese mixture, take a handful and form into a ball, then place in the middle of the dough. 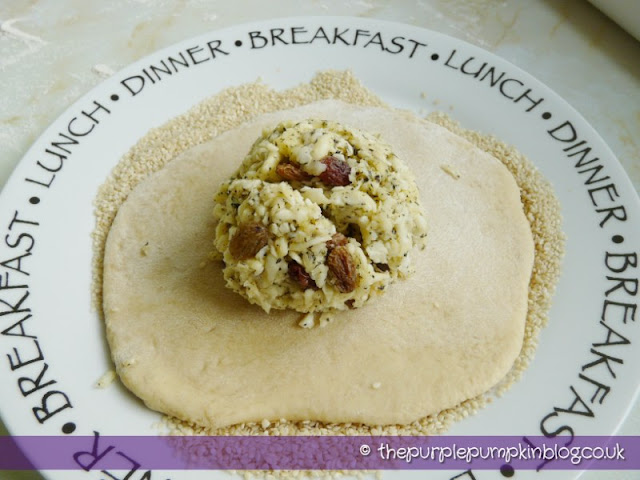 Add more egg wash around the top of the dough, around the cheese ball and bring up around the sides of the cheese mixture, pressing in to make it stick. My first one, which is always dodgy when making anything, was a bit mis-shapen, as I couldn’t get the shape right – but who cares – it tasted just as good! 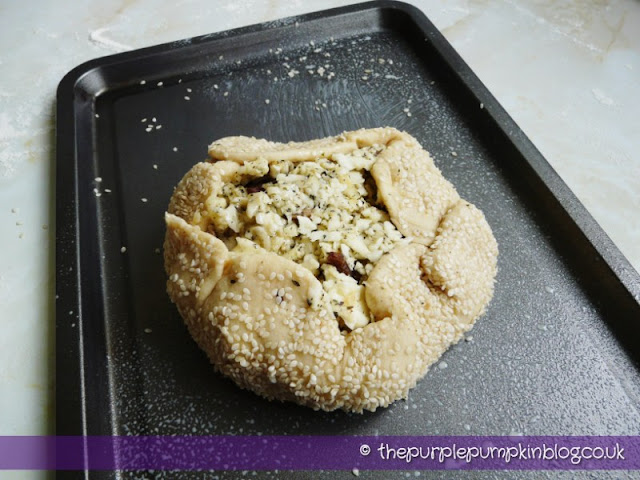 I then proceeded to make the rest into a triangular shape instead, pinching the corners together to seal everything in. 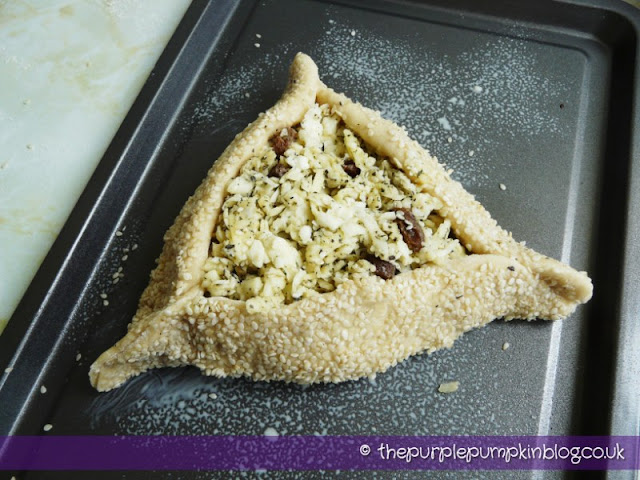 Onto my (old, well used) greased baking trays, and into the oven for about half an hour. My fan oven (which is very hot anyways) was set to 180C. The recipe actually gives 200C for 35-40 minutes. 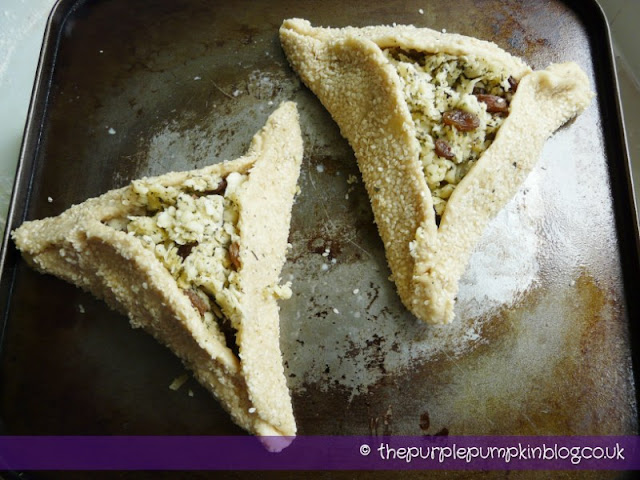 Remove from the oven and allow to cool a little before eating – they are best served warm. 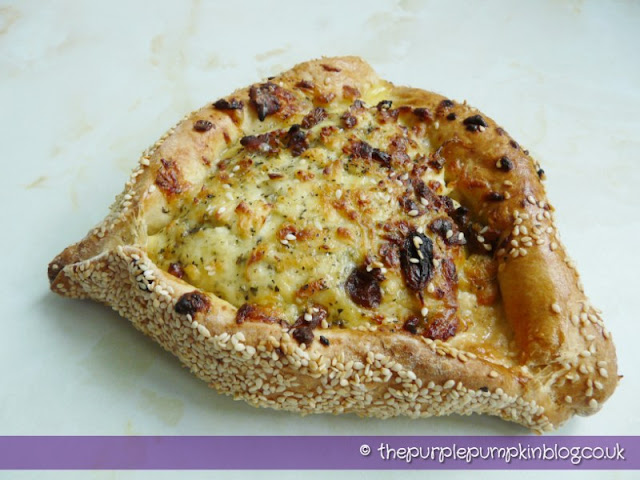 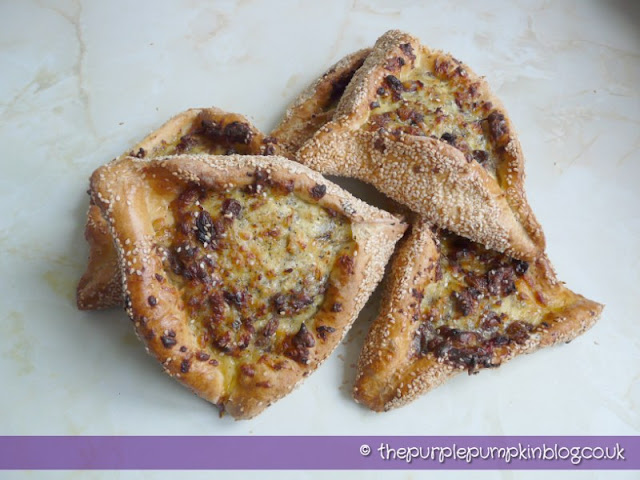 We really couldn’t wait that long, so the dodgy first one was cut open – look at all that lovely cheese, mint and sultanas! And the dough, yum! The masticha does give it that ‘Cyprus bread taste’ and whilst my husband didn’t have a clue what that should taste like, I knew, and it was there! 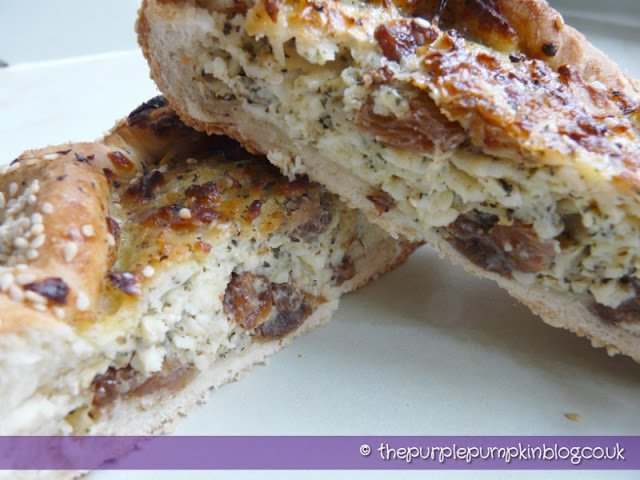 They can be cooled and heated up the next day, no problem, and can also be frozen. Thaw before warming up in the oven and eating.

The recipe makes 6 large flaounes – but you could make smaller ones, or double the mixture and make more!

All I ask is, if you get the opportunity to make them, please do! As I said in my ramblings earlier in this post, if you like trying new things, then this is a must try. I know that there are a lot of fiddly steps (that does seem to be a recurring theme with Greek cooking, I’m sure it’s that way to keep the women in the kitchen…!) but it is worth the effort.

When I make these next time I will remember to add the baking powder to the cheese mixture as it must help it to rise somewhat. I will also grate the cheese more finely…but whatever happens, I WILL be making these again, and I won’t be waiting till next Easter to do so!

For the cheese filling