A Budget BBQ For A Tenner with ASDA & #CBias

I am a member of the Collective Bias® Social Fabric® Community. This shop has been compensated as part of a social shopper insights study for Collective Bias. All opinions are 100% my own. #cbias #SocialFabric

ASDA pride themselves not just on matching other supermarkets, but also being 10% cheaper. When I was approached to create a family meal for under a tenner, the gauntlet was thrown and I accepted the challenge!

Knowing it was going to be a gorgeously hot weekend, the first thought for a family meal was BBQ!! We’ve just moved house and with a new garden to sit in, it was time to dust off the grill and get cooking in the sunshine. I wanted to keep things as simple as I could (although, for me that is a challenge in itself – I always go to town when throwing a BBQ, spending a fair bit of cash!) so thought, homemade burgers, salad and a fruit type dessert.

ASDA is not my usual supermarket as it’s about 3 miles or so away, but I have popped in there before when in town. Not knowing the supermarket too well, I wanted to see what their prices were like to help me decide further if I was making the right decision with my menu. I checked them out online and satisfied that I could do this for a tenner, made plans to go shopping on Saturday morning. You can read all about my shopping experience at ASDA along with photographs in my Google+ album. 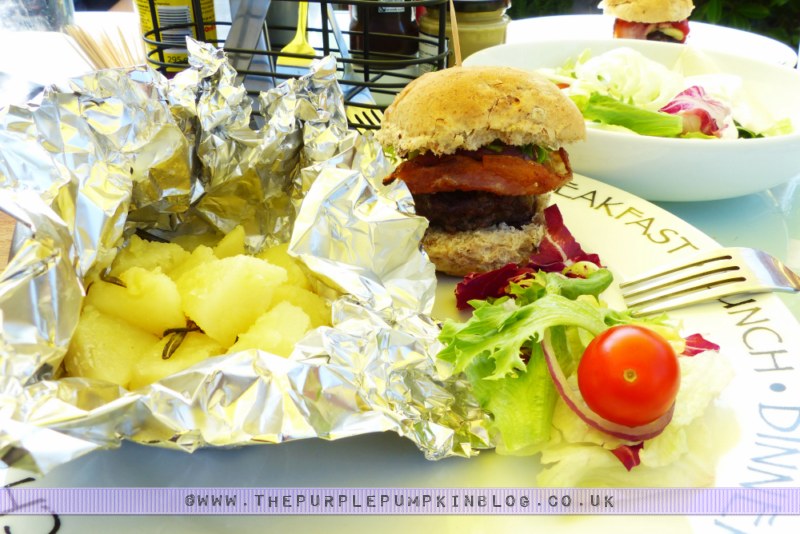 I really am a wing it sort of cook – often making things up as I go along! I took a look at all the ingredients I’d bought with a rough idea in mind, then raided my store cupboard to jazz up the menu.

I’ll be sharing my recipes throughout this post, so please do carry on reading!

From the store cupboard I pulled out some olive oil, sea salt, black pepper, garlic salt, dried chilli flakes, ground ginger, brown sugar, an onion and a jar of teriyaki sauce. I also glanced at my rosemary plant on the window ledge. It’s my favourite herb and features in a lot in my cooking.

Steve found the BBQ in the shed, among the pile of stuff in there after our house move last week, and got the coals fired up to grill our budget feast, while I prepped the food.

I bought a 750g pack of beef mince for £3. It came divided into two. I used one pack for the BLCT sliders – which are just plain burgers, with the bacon, lettuce, cheese and tomato (ketchup!) added afterwards, so you can serve these to the fussiest of burger eaters without the toppings.

I made all the burgers in advance and kept them in the fridge until needed, but here are some pictures to show you them being cooked and assembled…

The BLCT Sliders were juicy and full of flavour – and no need for smoked bacon as the coals do all the work! Having a plain burger as a base means you can jazz things up with various toppings.

I’m all for variety when it comes to throwing a BBQ – no matter how small – so I made two other kinds of burgers to go with the plain/BLCT ones.

Having bought pineapple rings for dessert, and then discovering a jar of teriyaki sauce in the cupboard, I decided to make Hawaiian burgers. Of course, not everyone is going to have teriyaki sauce as a store cupboard staple, we just happen to have quite a lot of ethnic ingredients in ours. If you have soy sauce, I think that would work as well for flavour, you may not need as much though as my ingredients list suggests.

The sweetness of the pineapple went really well with the burgers – the teriyaki sauce made these burgers tender and flavourful. I’m sure soy sauce would work just as well, but if you can get some teriyaki sauce, do try these out!

The final burger/slider flavour was chilli and ginger, not having fresh of either of these, I turned to the dried variety and they still worked ^_^

Hubby commented that these burgers really packed a punch! I didn’t think that they were over chillified – but of course, season to your tastes!

You could be really brave and add more fresh chilli!

With the sliders all prepared and in the fridge, up next was the prepping for my garlic and rosemary potatoes. These do need some pre-cooking, but they could be doing that while you’re making the burgers.

I often cook potatoes this way on the barbecue. Yes, there is the pre-prep of par boiling them, but being on the grill gives them a nice smokey flavour as well. The ones on the bottom were crispy from sitting directly over the coals, and it is worth putting them in the coals to get more crispiness around them. Just be mindful to keep them on the outer coals so as not to burn them!

Grilling corn on the cob is one of life’s simple pleasures! To save money on my ASDA shop, I bought two corn cobs for £1 and halved them myself, instead of play £1.79 for the same thing, but done by the factory where they are prepared!

I bought a pre-made salad, so the prep was simple – rip off the plastic lid, wash and dump into a serving bowl! The salad had a couple of varieties of lettuce, cherry tomatoes, red onions and bell peppers.

My boy set up the table with crockery, cutlery, napkins and condiments, while hubs cooked the grub.

With everything ready and the sun shining, it was time to enjoy our budget BBQ and to see if it was a tenner well spent!

Our budget barbecue was a success! The different kinds of burgers I made went down well, and there was enough to feed a family of 4…although we are a family of 3, I’ve got a teenage boy who likes to eat and a husband the same!!

The coals on the BBQ were still red hot about an hour later, so I got the dessert ready. I used canned fruits, but you could just as easily do this with fresh fruit instead. (As I have done in the past). And in case you are wondering, we did change the grill – we didn’t use the same one we’d been grilling meat on!

It was a modest and easy dessert – just the right serving size to satisfy a sweet tooth (I always have to have something sweet after a meal!), and the fact that it was fruit and yoghurt made it feel not so naughty!

Knowing how much money we tend to spend on BBQ food – things like various different meats, chips, dips, sauces and salad veggies do add up, but for a tenner and this simple (to me anyway!) BBQ – well, by the end of it we were stuffed!! Had to wait a while before I even bothered to tackle the dessert! I remarked to hubs how far ten pounds actually went – even though we had to throw in some store cupboard bits, I think you can easily have an informal BBQ for your family on a budget much smaller than you realise!