These recipes are from my blog, as well as from other fab food bloggers. I have made all of the recipe links open in a new window so that you don’t lose your place in the list.

Those that know me well, know that I LOVE American culture – I have done since I was a little girl and have always wanted to live in the USA. Maybe one day my dream will come true, but in the mean time I love to embrace the American holidays. One that is coming up soon is Mardi Gras!

[Now, before everyone shouts at me and tells me that Mardi Gras is also celebrated in other countries around the world, I know that, (of course!) but I’ve put my focus on the celebrations in New Orleans, which is somewhere I hope to be able to visit one day.]

Mardi Gras, also called Shrove Tuesday, or Fat Tuesday, in English, refers to events of the Carnival celebrations, beginning on or after the Christian feasts of the Epiphany and culminating on the day before Ash Wednesday. Mardi Gras is French for “Fat Tuesday”, reflecting the practice of the last night of eating richer, fatty foods before the ritual fasting of the Lenten season. – Wiki

This post contains Amazon Affiliate links. If you clicked the link then made a purchase, a small percentage of the sale price would be paid to this me. It doesn’t cost you anything more but it helps keep the lights on over here! 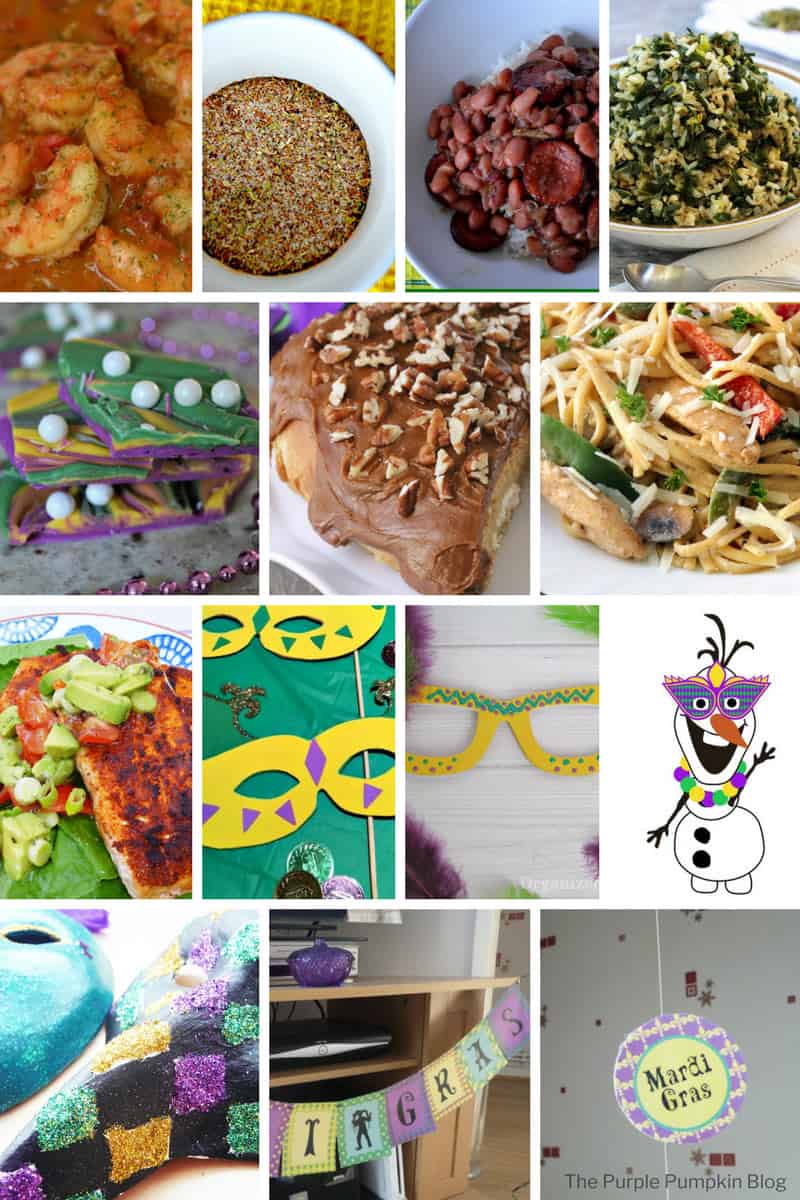 I have updated this post and added some new recipes for you to try, along with some fun crafts & printables too!

I like knowing the history and origins of food, so I thought I would share some background info (thanks to the fountain of knowledge that is Wiki!) on the different Mardi Gras recipes above…

Muffuletta – The muffuletta is both a type of round Sicilian sesame bread and a popular sandwich originating among Italian immigrants in New Orleans, Louisiana using the same bread.

Crawfish – Crayfish, also known as crawfish, crawdads, freshwater lobsters, or mudbugs, are freshwater crustaceans resembling small lobsters, to which they are related. Symbol of Louisiana.

Grits – a ground-corn food of Native American origin that is common in the Southern United States.

Blackening – a cooking technique used in the preparation of fish and other foods. Often associated with Cajun cuisine. The food is dipped in melted butter and then dredged in a mixture of herbs and spices, usually some combination of thyme, oregano, chili pepper, peppercorns, salt, garlic powder and onion powder. It is then cooked in a very hot cast-iron skillet.

Cajun Cuisine – this style of cooking is named for the French-speaking Acadian people deported by the British from Acadia in Canada to the Acadiana region of Louisiana, USA. It is what could be called a rustic cuisine; locally available ingredients predominate and preparation is simple.

Maque Choux – a traditional dish of southern Louisiana. It is thought to be an amalgam of Acadian French (Cajun) and American Indian cultural influence, and the name is likely to derive from the French interpretation of the Native American name. It contains corn, green bell pepper, onion, and sometimes garlic, celery, Tomato.

Dirty Rice – a traditional Creole dish made from white rice which gets a “dirty” color from being cooked with small pieces of chicken liver or giblets, green bell pepper, celery, onion and spiced with cayenne and black pepper.

Jambalaya – a Louisiana Creole dish of Spanish and French influence. Traditionally made in three parts, with meat and vegetables, and is completed by adding stock and rice.

Etouffee – a dish found in both Cajun and Creole cuisine typically served with shellfish over rice. The dish employs a technique known as smothering, a popular method of cooking in the Cajun areas of southwest Louisiana.

Red Beans and Rice – an emblematic dish of Louisiana Creole cuisine traditionally made on Mondays with red beans, vegetables, spices and pork bones as left over from Sunday dinner, cooked together slowly in a pot and served over rice.

Gumbo – a dish that originated in southern Louisiana from the Louisiana Creole people during the 18th century. It typically consists primarily of a strongly flavored stock, okra, meat or shellfish, a thickener, and seasoning vegetables, which can include celery, bell peppers and onions.

King Cake – a type of cake associated in a number of countries with the festival of Epiphany at the end of the Christmas season; in other places, it is associated with the pre-Lenten celebrations of Mardi Gras/Carnival. What started out as a dry French bread type dough with sugar on top and a bean inside roughly 300 years ago, is now a sweet, sugary and iced Danish type dough that is braided with cinnamon inside and a plastic doll underneath. King Cakes are made of a cinnamon filled dough in the shape of a hollow circle. They have a glazed topping and are sprinkled with colored sugar. Hundreds of thousands of King Cakes are eaten in New Orleans during the Carnival season.

Bread Pudding – a bread-based dessert popular in many countries’ cuisines as well as the Creole people of Louisiana and others in the southern United States.

Bananas Foster – is a dessert made from bananas and vanilla ice cream, with a sauce made from butter, brown sugar, cinnamon, dark rum, and banana liqueur. Created in 1951 by Paul Blangé at Brennan’s Restaurant in New Orleans, Louisiana. It was named for Richard Foster, a friend of Owen Brennan who was then New Orleans Crime Commission chairman. It is still served at a number of restaurants in New Orleans and elsewhere.

Beignet – synonymous with the English “fritter”, is the French term for a pastry made from deep-fried choux pastry. Beignets are commonly known in New Orleans as a breakfast served with powdered sugar on top.

Hurricane – sweet alcoholic drink made with rum and fruit juice, syrup, or grenadine. It is one of many popular drinks served in New Orleans.

Sazerac – a local New Orleans variation of a Cognac or whiskey cocktail, Some claim it is the oldest known American cocktail, with origins in pre–Civil War New Orleans.

Please feel free to share these 25+ Mardi Gras Recipes by using the social buttons at the bottom of this post! Don’t forget that you can join The Pumpkin Patch for member exclusive freebies, offers, and more; and follow The Purple Pumpkin Blog posts on Feedly or on Bloglovin’ so that you don’t miss out!