The final recipe I’m sharing from our Around the World Date Night, where we “visited” New Orleans and Mardi Gras is for King Cake. 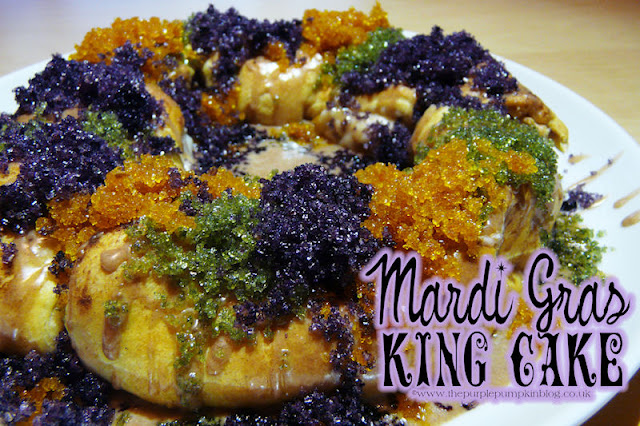 Some how I knew about King Cake at Mardi Gras, so wanted to make one for our date night. Here is what Wiki says about King Cake, just so you know too :D

A king cake (sometimes rendered as kingcake, kings’ cake, king’s cake, or three kings cake) is a type of cake associated with the festival of Epiphany in the Christmas season in a number of countries, and in other places with the pre-Lenten celebrations of Mardi Gras / Carnival. In the United States, Carnival is traditionally observed in the Southeastern region of the country, particularly in New Orleans, Mobile, AL, other towns and cities of the Mississippi Gulf Coast, on the southeast Texas island of Galveston, and Louisiana. In this region, the king cake is closely associated with Mardi Gras traditions and is served throughout the Carnival season, which lasts from Epiphany Eve to Fat Tuesday.

The cake has a small trinket (often a small plastic baby, said to represent Baby Jesus) inside (or sometimes placed underneath), and the person who gets the piece of cake with the trinket has various privileges and obligations.


After reading various recipes on how to make a King Cake, I made up my own version…whether it is authentic is up for debate! But it turned out delicious, and I would make my King Cake again ;) 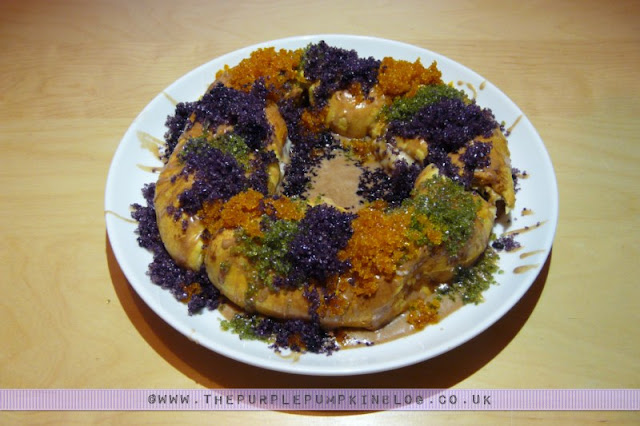 For the icing topping

For the coloured sugar sprinkles

Since I didn’t have a plastic baby to put on my King Cake, I just made toppers using the free printable I shared last week and stuck those in instead.

We ate our King Cake with some of the Bananas Foster I had made for dessert – was lush!!