Day 15 of WDW-40, the latest of my Disney Trip Reports, is FINALLY here! Today we had somewhat of a rest day with some time spent at the pool, and then over to Magic Kingdom, late afternoon for Mickey’s Not-So-Scary Halloween Party! After having a lot of rain at the last Halloween party, we were hoping that the weather would be kind. 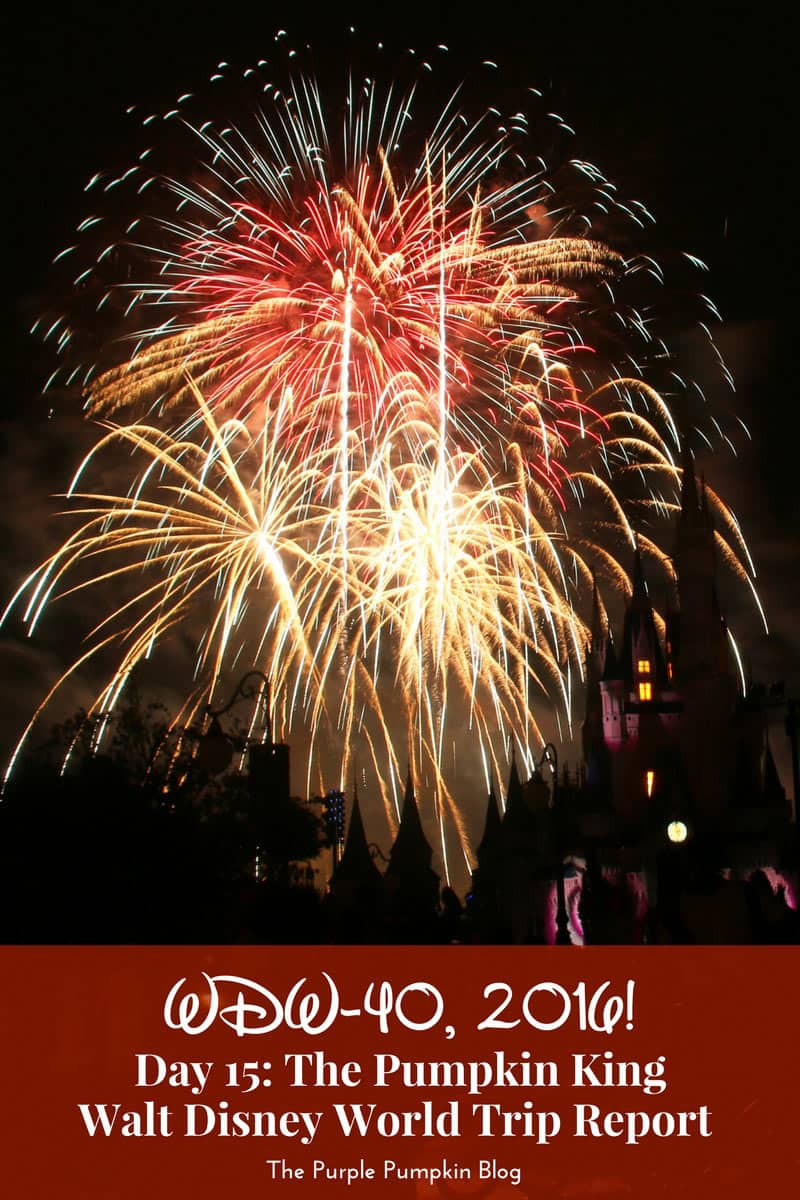 Oasis Pool, Disney’s Polynesian Village Resort
September 18th, 2016
My trip reports are generally photo heavy, images in tiled galleries can be clicked on to enlarge. All the photos from this day can be found here | Florida 2016 photo collection on Flickr here.
WDW-40, 2016: Trip Report Index | Pre-Trip Planning Report
Some days are split into several parts; please use the page numbers at the bottom of the post to continue reading.

Before I get into today’s part of my Disney Trip Report, I have a few things I need to explain… 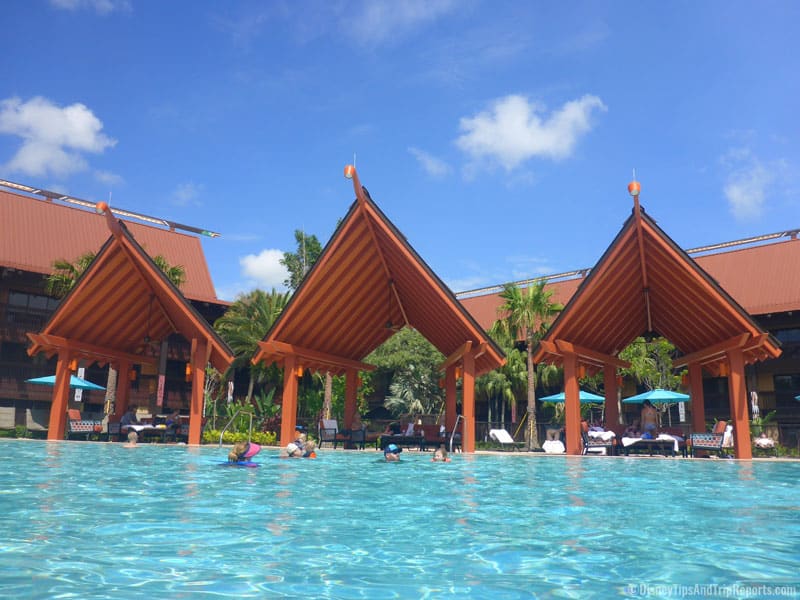 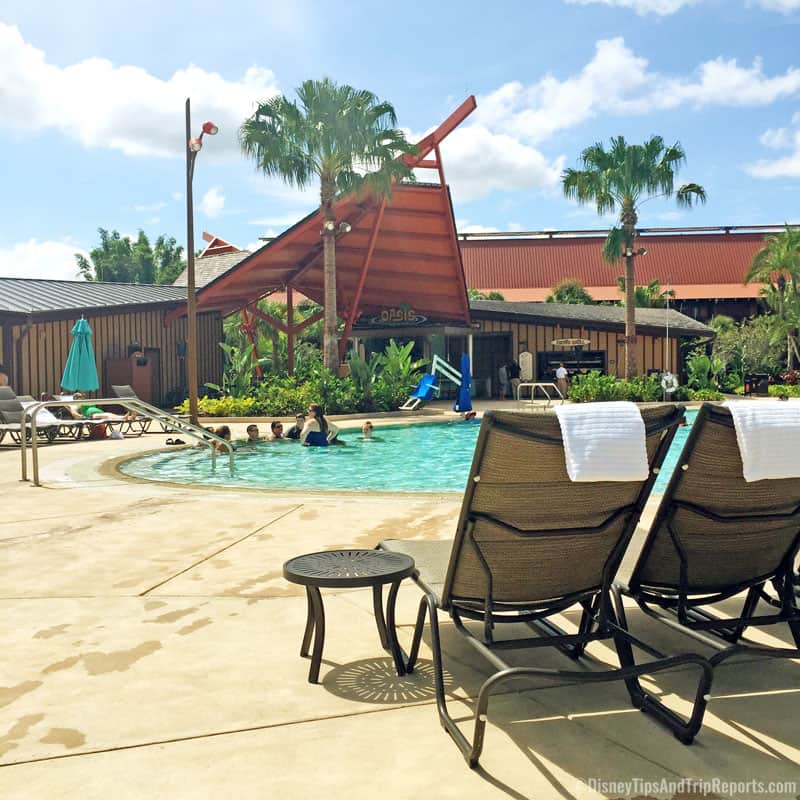 After a bit of a lie-in we spent most of the day in and around the Oasis Pool which is the smaller/quieter of the two pools at Disney’s Polynesian Village Resort. It was never too busy when we visited the pool which was nice. The Lava Pool (which we didn’t get to on this trip) has a big water slide and is naturally very popular with families. I’m sure we’ll get there on future trips.

There are three cabanas for guest use – I have heard that during high season you have to pay to reserve these, but we used one without having to pay a fee. There are plenty of sun loungers, as well as tables and chairs surrounding the pool. There are steps leading in, as well as a zero entry point. There is also a hot spa pool as well which we dipped into a few times.

For food and drink while at the pool you’ve got the Oasis Bar & Grill which if you look at the panoramic photo above is pretty much in the middle of the picture, under the canopy. They serve tasty favourites like fish tacos, kalua pork sliders and Polynesian-themed burgers, along with tropical cocktails, wine, Hawaiian beer and assorted beverages. You can also fill up your resort mug (if you have bought one, or are on a Disney Dining Plan) at the machine just to the right of Oasis Bar & Grill.

We had a few cocktails and a spot of lunch, but strangely for me, I don’t appear to have any photographs of the food that we ate. I have photos of the cocktails though! I had a burger and a Lava Flow cocktail (a fancy Piña Colada!), and Steve had fish tacos and a Captain’s Mai Tai.

Steve and I didn’t dress up as such – he put on his Ghostbusters T-Shirt and I wore my purple dress and my purple sequin Minnie Ears. If it was easy to buy a costume in my plus size believe me I would dress up! Maybe one year I’ll actually make a costume.

My brother, on the other hand absolutely nailed it as Beetlejuice! From the moment we started walking from our room at Poly to the Monorail Station people kept shouting out Beetlejuice, three times – and my brother, the complete showman that he is would shout back “It’s showtime”.

The funniest thing though was on the Monorail (I had forgotten about this until I came to sort out all of my photographs), and that is the group of women who were headed to Magic Kingdom to celebrate a birthday – they wanted a photo with my bro. So somewhere in the world, on a random person’s phone is a photo of him with these women (he loved it!)

Mickey’s Not-So-Scary Halloween Party is a separate ticketed event which you purchase in advance. Popular dates (31st October) and weekends fill up quicker – so it’s highly unlikely you’ll be able to buy a ticket on the gate, but on some nights there are still tickets available. Tuesdays are said to be one of the less busy days. If you really have your heart set on going then it makes sense to buy your ticket in advance. It is linked to your Magic Band via My Disney Experience. There are discounts for Disney Vacation Club (DVC) Members, and Annual Passholders (APs).

The ticket grants you access to Magic Kingdom from 4pm – although the party itself doesn’t start till 7pm. The park doesn’t shut to regular guests, but they are ferried out pretty well by the Cast Members as 7pm approaches. Cast Members do also sweep by checking your wrist bands – which are secured around your wrist as you enter the park. Ultimately, once 7pm arrives if you’re not a party ticket holder you won’t be able to purchase from the shops, and you won’t be allowed onto the rides.

We’ve been to two previous parties, but this was the first time we were in the park for around 4pm. As we walked in, there was a Cast Member holding a sign and directing party guests to the right, just past Tony’s Town Square Restaurant. The gates that are usually closed, were open. This was our third party, but the first time we had been early enough to go this way! There were some Halloween statues which were really cool, and we were handed a pack of candy. We ended coming out of this area just by Cinderella Castle.

Since this was my brother Chris’ first MNSSHP, but our third, I said to him and his girlfriend that they could go off and do whatever they wanted. For me I wanted to get some Limited Edition pins that you can only buy at the parties, and I had to meet Jack & Sally (from Tim Burton’s The Nightmare Before Christmas). Knowing how very popular these guys are to meet, I wanted to get lining up as soon as possible! They decided to stay hanging out with us which was fine… cue

The Beetlejuice chants were called out so many times as we wandered the park, and Chris kept playing up to it. Quite a few people were asking him for selfies, which I thought was hilarious! Even more awesome was when a couple of Cast Members walked by us and said how they had heard Beetlejuice was in the park! Brilliant!

Back to the pins which were only being sold in Big Top Souvenirs in Storybook Circus. As you lined up Cast Members were handing out sheets which showed which pins (and other MNSSHP merch) was available. Some where only available for Annual Passholders, and I think maybe for Disney Vacation Club Members… I can’t remember now. I know for sure they were for APs as I was cursing myself for not being one! Whilst waiting to buy my pins, I asked where Jack and Sally were doing their Meet & Greet as that would be the next port of call.

Jack Skellington and Sally are in Liberty Square, and because they are so popular actually come out for about 5pm – you want to be lining up at about 4:30pm. According to the time stamps on my photos, we started lining up at about 6:30pm, and didn’t meet them until 8:30pm (all give or take!) So a nice 2 hour wait!!!!! Now, normally I wouldn’t bother, but having not done a single Halloween Meet & Greet myself in all of our MNSSHP visits, it had to be done.

As we lined up we were handed a card with Jack and Sally’s autographs (I think they do this for all the characters at the big events) to save time on them signing autographs each time they greet a guest. Now, stupidly I don’t seem to have a photo of that either (or the pins) so I’ll dig them out, take pics, then pop back here and add them.

When we started lining up it was light, by the time we got to the front of the line it was dark!

Jack & Sally were fun to meet. Jack and my bro compared suits, and we all had photos take – there was a Disney PhotoPass Photographer, but you can take your own photos too – they’re happy to use your cameras and take the pictures for you. I also love to take selfies with the characters, so I did that too.