I am a member of the Collective Bias® Social Fabric® Community. This shop has been compensated as part of a social shopper amplification for Collective Bias and its advertiser. 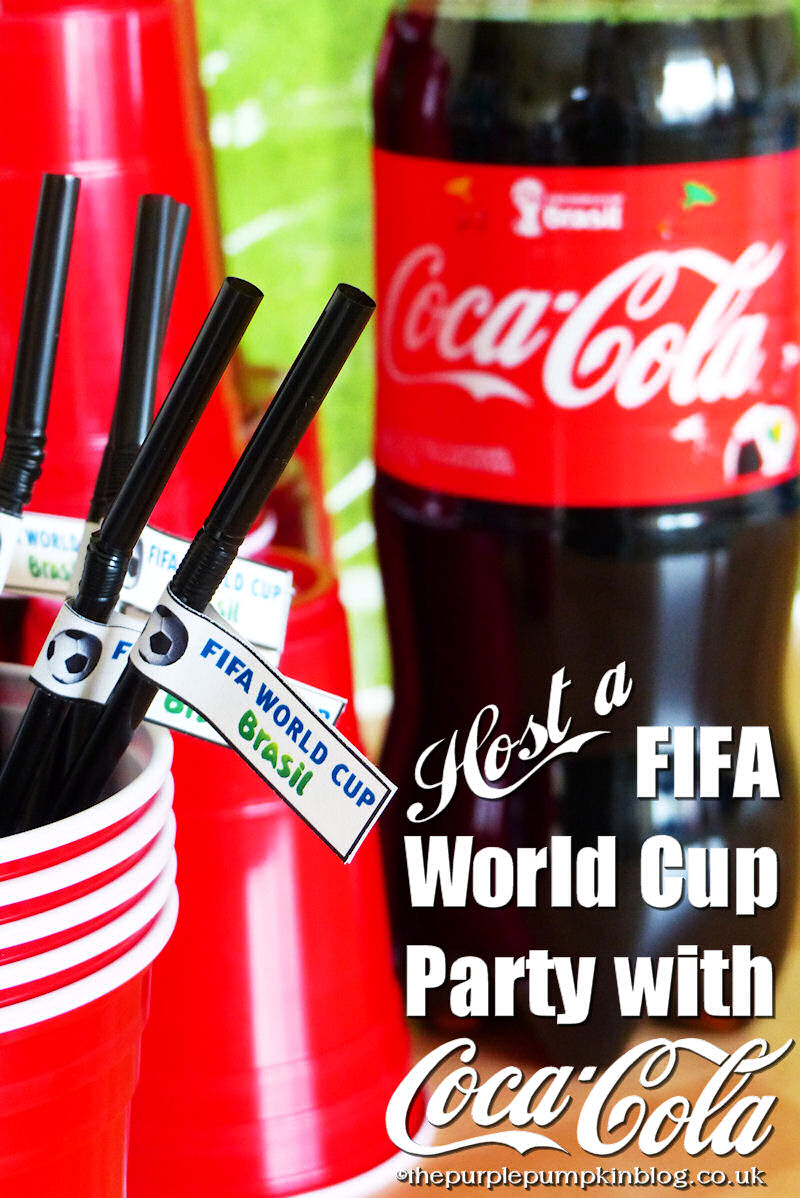 The FIFA World Cup is upon us – the first game is this evening, with the host nation Brazil playing against Croatia. I know that I have readers from all over the world – so, I ask you – is your national team playing? And perhaps more importantly, will you be supporting them?!

I always host some sort of World Cup party for friends and family, and this year #CollectiveBias asked me if I’d like to get involved with the #BigMatchPlanner and Coca-Cola; well, who am I to say no??

I live in a house with two males – hubs and the boy, which means that there is a lot of football talk and watching on a daily/weekly basis already…but the World Cup is one of the big events that even I get into, cheering on England, and shouting at the TV when there are missed shots, fouls and penalty shootouts!

…and I’m going to be sharing with you the ideas I had when I threw a pre World Cup Party last weekend – let’s call it a friendly!


If you know me, and you know my blog, then you will also know that I can write a LOT and share a LOT of photographs in one blog post. This post, my friends, is one of those posts! I can’t help it, I have LOTS to tell you! But stick with it, because I’m positive that you will be inspired to get into the #BigMatchPlanner spirit with Coca-Cola as much as I was! So, shall we get going?

Of course, you don’t have to send a formal invitation – but there is something nice about receiving an invite, even by email, to a party or event. I made one to email around to my friends and family inviting them to our FIFA World Cup Party. 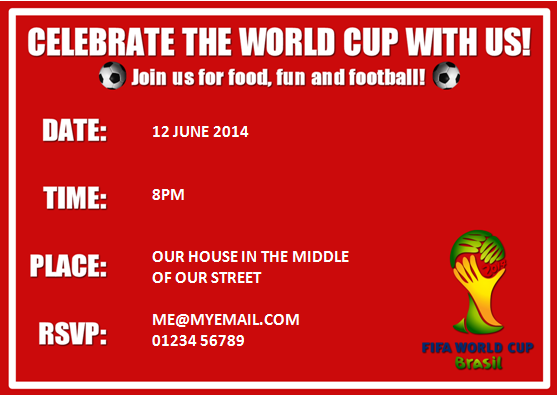 I can’t share a party with you, without sharing some free printables! I like to make my own because it means I can get exactly what I want! Of course, I’m not averse to buying decorations in – either way, it’s always fun to decorate for a party or event, and I always do it, no matter how small the get-together!

I’m loving designing and making paper chains at the moment, they’re so easy to print and construct and you can hang reams of them for a great impact with minimum spends.

I’ve made them in red and white (for England!) and in green and yellow (for Brazil!) Just download the World Cup Paper Chains Free Printable here, print, cut and loop together – fixing with either a dab of glue or tape. 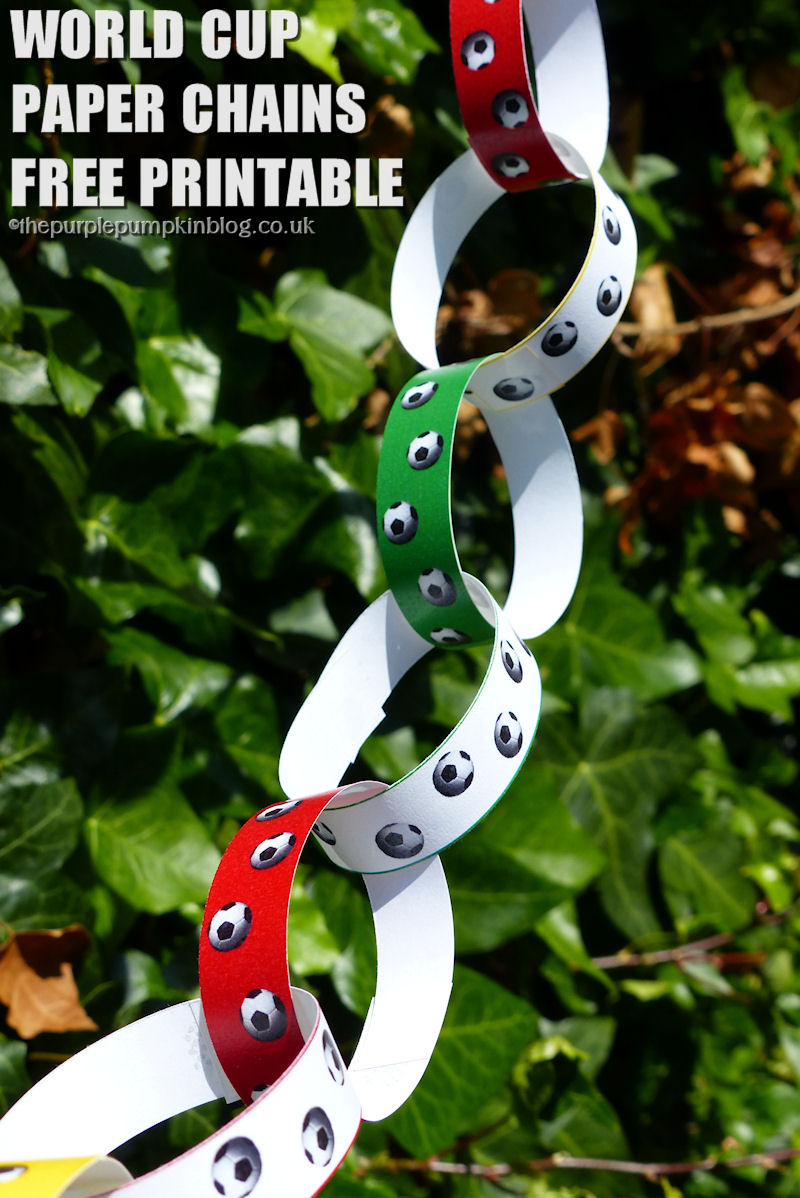 In this house we drink Coca-Cola through straws, and a cute little touch is to decorate said straw with a pennant. They are easy to make, just fold a strip of paper around the straw (just under the bendy bit!) It helps if you put glue across the whole strip first and then bring the two sides together and press firmly. I designed these on my computer.

I created football toppers – in black and red, which I ended up using as confetti scattered around the food. I was going to use them on some straws (which is why the two slit marks are on there!) but you could use them as cupcake toppers (poke a cocktail stick through the slits!) or, as I did, as confetti decoration! You can download and print the Football Toppers here.

There are 32 countries competing in the FIFA World Cup, which means 32 to countries to [maybe!] cheer on. Hubs found some circular flags online (which are free for non-commercial use) whilst he was organising the World Cup sweepstakes at his workplace, and thought I’d find them useful for my party – he wasn’t wrong! I printed them off, cut them out and they’ve been placed in the living room. The boy had a great idea – each time a team is knocked out of the tournament, we remove that flag – genius!

You can print off your own World Cup Flags here; the easiest way to cut them is to start with a full coloured one and use that as a template for the flags with white in them. I didn’t design these flags, but have put them into one document for easy printing. I also made some World Cup wrappers (seen above) – I didn’t use them at this party, but they’re great for wrapping around bottles or cups, bundling cutlery and napkins together, you could also turn them into cupcake wrappers too.

Our home team is England – so, in true English supporter style, we dug out our England flag and bunting and they have been hung around the home – they’ll stay up as long as we are in the tournament!! It’s actually quite nice to walk around my neighbourhood and see all the England flags hanging outside people’s homes – we take the World Cup quite seriously out here in Essex!! The bunting is out hanging in the gazebo and the big flag is hanging on the fire place…Come on England!!

Preparing the party food is where I tend to step up to the plate – I love cooking, I love cooking for lots of people and I love sharing my recipes with you guys! I debated with myself (as I always do!) what to serve at my #BigMatchPlanner party, some of the dishes were even made using Coca-Cola as an ingredient!

I thought about making a few traditional dishes from the World Cup countries as part of the buffet, but then I thought, what if they don’t taste good all together? So that idea went out the window. I then thought I’d go with Brazilian themed food, but again, after looking online I didn’t think I could pull it off (to my standard – I set that bar quite high for myself!!) for a crowd (for a dinner party, I totes would though!)

In the end, I decided the easiest way to feed a lot of people was to set up a Taco Bar -its the perfect party food for guests as they can build their own tacos and wraps, plus they are easy to eat whilst watching a football match – especially walking tacos!! To make a walking taco, just crack open a bag of tortilla chips and give them a bit of a scrunch to break them up, add your favourite taco toppings and then dig in with a spoon or fork!

I’m going to cover the set up of my Taco Bar more in depth in a separate post, so watch out for that very soon! With party food, I like to buy some things ready made (to save time and stress) but I do like to cook from scratch too, and I’ve already shared my recipes for Pico de Gallo and The Best Guacamole Ever! As well as my Coca-Cola Chicken Strips which went really well in soft tortilla wraps.

With the savoury side of food taken care of, it was time for the sweet…I saw some cupcakes and caramel squares decorated with footballs whilst I was at Tesco shopping for Coca-Cola and all the other party food, and they were perfect to add to the dessert area. I also bought some chocolate covered peanuts in Brazil’s flag colours, and of course, Cola Bottles – that delightful fizzy retro sweetie!

I couldn’t leave it there though, so I made some desserts too, including Coca-Cola Chocolate Cake, Cherry Coca-Cola Cupcakes and Coca-Cola Ice-Lollies.

When it comes to soft drinks, there is one that always gets drunk in our house, and that is Coca-Cola – be it Regular, Diet or Zero (I heart Cherry Coke though!) Our local Tesco currently have a fab offer on Coke for the World Cup with a pack of 4 x 1.5L bottles for just £4 – bargain! I bought two packs of regular, one of diet and I had to buy up a pack of the retro glass bottles of coke, because I think they are the most gorgeous bottles ever!

Be sure to stock up on these special packs though they are flying off the shelves! I went back to buy some more…all gone!! They’re proving to be very popular – but oh so many Coca-Cola products to buy! The offer ends 17th June, so be quick!

When it comes to parties, I always set up a drinks serving station, with bottles of drinks, cups, ice, straws etc, this means people can help themselves as and when they wish! For this party, it was a Coca-Cola Serving Station! There was also a tub of vanilla ice-cream in the freezer so that we could all make Coke Floats, that deliciously retro drink/dessert!

@cherry_o This looks amazing! Hope you had a great party :)

Well, that’s the World Cup match – duh!! But for some pre-match entertainment, you could watch a World Cup Highlights DVD (like we did) to get you in the spirit, you could play a football video game, like the boys did, or get outside and have a penalty shoot out or a kick-about with a football (burn off some of those calories from the party food!)

Games, are not something I organise for every party I host, but for this World Cup party I thought a few games to test everyone’s knowledge about the tournament would be a fun thing to do, and everyone was up for the challenge!! You can download and print the following…be warned the trivia quiz is hard! I think the highest score was 7 out of 20!!

With everything organised, it was time to party and enjoy food, fun and football with family and friends!

I do hope you’ve enjoyed reading all about my FIFA World Cup Party with #BigMatchPlanner and Coca-Cola, and that you’ve been inspired to host your own party during the tournament! If you use any of my ideas or printables, then I would LOVE to hear from you! Just use the hashtag #BigMatchPlanner where you’ll find a wealth of ideas from lots of other bloggers, and be able to follow along with everyone else!

And finally…if England do win the World Cup, I’m pretty sure this would be my niece Sephy’s game face!!