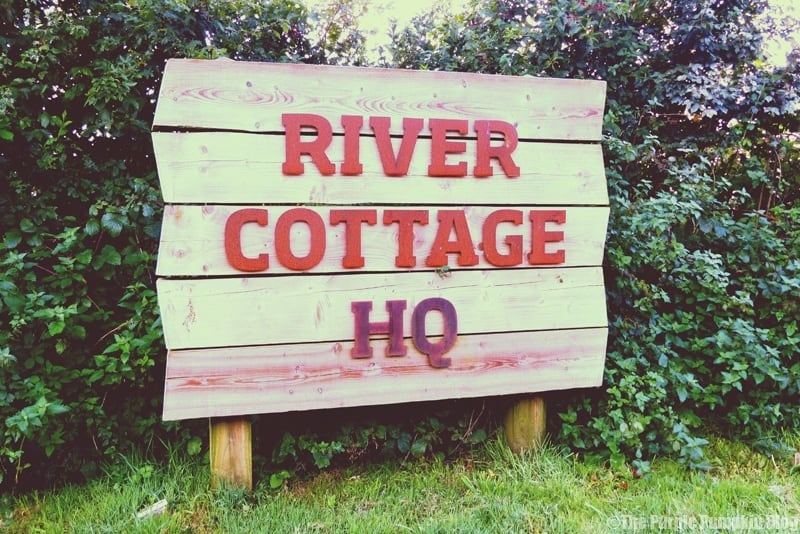 After you’ve been looking forward to something for so long, then it comes, and goes, then you say something like “ooh, this time last week/month/year…”. That. That’s how I feel, writing up this post today! This time last week, I was at River Cottage HQ, in Axminster, on the Devon/Dorset border, and it’s somewhere that I have wanted to visit for many years now. I’ll explain why…

I’ve been watching the TV series, River Cottage, presented by Hugh Fearnley-Whittingstall, since the very beginning, with Escape to River Cottage. I’ve got pretty much all of the recipe books, and DVDs of the television shows, which I never tire of watching. I think it’s because the lifestyle seems so relaxed, friendly, and back to basics, and I’ve since longed to live an idyllic life in Dorset – for me, it’s the perfect blend of countryside and the sea.

Steve and I chose Bridport, Dorset, as the location of our first family holiday together in 2006, because of our love of River Cottage! Just being in the same part of the world that Hugh would showcase on his television shows, was a wonderful thing, and we have enjoyed several more holidays in the region since then.

I have also had the pleasure of meeting the man himself, not once, but twice, at Taste of London events! To say I (we – the husband and I!) are fans, is an understatement… so I hope this will help you to understand that being one of the selected bloggers to attend Blog Camp River Cottage, was like a dream come true for me (and Steve was insanely jealous!).

It was a day to get cooking with River Cottage’s Group Head Chef, Gill Meller in the kitchen (making soda bread and butter), receive some food styling and photography tips from Lucy (Capture By Lucy), tour the gardens with Head Gardener, Will Livingstone, as well as enjoy a delicious lunch, prepared by the River Cottage chefs. On top of that, a chance to get together with other bloggers (always a great thing), take lots of photographs (I ended up with 500!), and come away inspired, as I always do when I attend blogger events.

Now, don’t panic, even though my posts are always photo heavy, I’m not going to be including 500 photos here! In fact, by the time I went through them all, deleted duplicates, crappy, totally missed the focus, or poorly composed photos, I’ve ended up with 250 of them… and even then, I’m not going to share ALL the photos! I’ll pop them into a photo album on my Facebook page, where you can take a look at them all.

My day started early-ish, leaving the hotel that I stayed in the night before, for the 15 minute or so drive to Axminster. I have a fear of being late for things, and always arrive super early. In this case, about 45 minutes early! It was nice to be out in the early morning fresh air, and take in my surroundings. It’ll be a while before I’m back down in this part of England again, so I wanted to make the most of it. I also wanted to try and calm my nerves, as anxiety was starting to flow, especially when I saw other bloggers arriving, and not recognising anyone. My strategy to cope, was to stay in my car for as long as possible, and only step out when it was time to make our way down to the farm.

The tractor and trailer then pulled up to transport us River Cottage, so I braved getting out of the car. Fortunately, as I did, Grace, from Eats Amazing, excitedly said hello, and it was a relief to see someone that I have met before! Soon, more familiar faces appeared, and any anxiety that I had, started to melt away. I also struck up a conversation with Sara-Jayne from Keep Up With The Jones Family, who I haven’t met before, but know loves Disney as much as I do – so we had lots to talk about, and we laughed at the relief at not sounding bonkers, as we chatted about one of our favourite places in the world!

Everyone was given a name sticker, with different colours – we would all be split into three smaller groups to attend the various sessions during the day. (I liked that it was done this way, as it was a chance to talk to other bloggers that I hadn’t met before.) You could sense the excitement in the air, as the tractor made its bumpy journey down the hill, and as we stepped down, out of the trailer, we were led to a yurt (or is it a bell tent?), for a brief introduction about our day at River Cottage HQ. With hay bales to sit on, and a roaring log fire in the centre of the tent, it was all very cosy!