And finally, we’re onto desserts for my Year of the Dragon Chinese Banquet! I bought Mochi rice cakes, which aren’t Chinese (they’re Japanese), but it is traditional to have rice cakes on Chinese New Year, and since we love them, we bought them from Chinatown. I also bought a Chinese rice cake in the shape of a fish, which was the most odd thing ever, but will talk about that a little later on!

The dessert I did make was toffee banana and toffee apple. I didn’t cook the fruit off in batter as I was supposed to – one, because it was late by the time we had dessert and two, because my oil was looking manky and I didn’t want to cook any more in it! 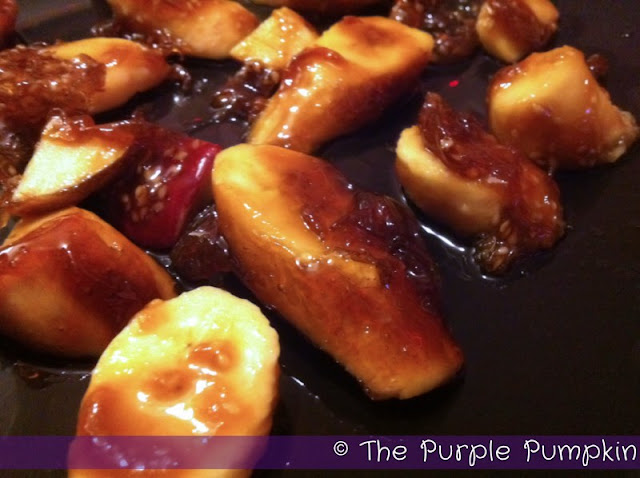 My husband told me that he’d been to a Chinese restaurant where they made toffee banana at the table, and they dunked the fruit into the melted sugar and dropped it immediately into ice cold water to harden it. So to start with I got a bowl of water and added a load of ice cubes to make it really cold.

I then cut up my bananas and apples (I used 3 big bananas and 2 medium apples for 8 of us) into pieces – the apple into chunks and the bananas into thick slices on the diagonal.

Now time for the toffee, which was just 200g sugar and 50ml water, stirred in a saucepan whilst cold, and then brought to the boil until ‘hard crack’ stage which on my sugar thermometer is just under 150C. It is important not to stir it whilst this is going on. If you don’t have a sugar thermometer you can test the toffee by dropping a blob into the water – it should harden instantly, and when removed should be easy to break and not be squishy – if it is, you need to continue boiling until it is ready. I then stirred in some sesame seeds.


Then, working quickly, I dipped the fruit into the toffee (I used a fork, and whatever you do, don’t touch the molten sugar with your fingers – it will burn!) and dropped them into the bowl of ice cold water, removed and put them on a serving dish.

I served the toffee banana and toffee apple with vanilla ice-cream and it was well received! 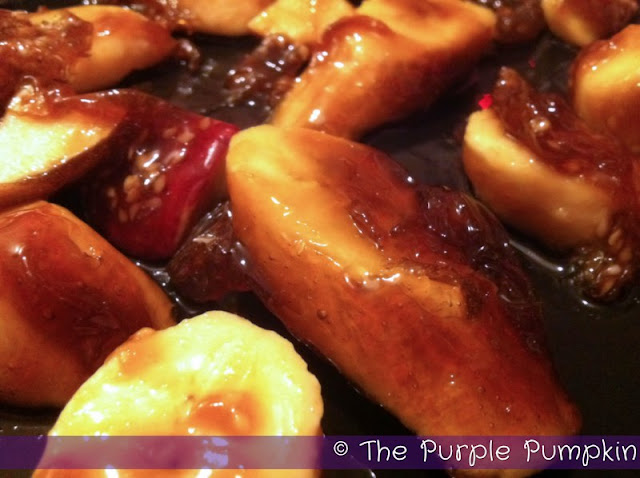 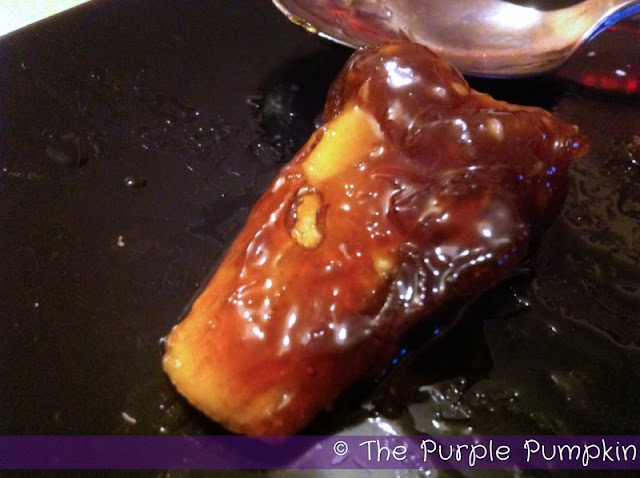 Here are the delicious Mochi rice cakes that we bought in Chinatown – they’re a must have for me when I go to a sushi bar, and it was wonderful to be able to buy them in the Chinese supermarkets in London.

Mochi are Japanese rice cakes made with glutinous rice, which is pounded into a paste and moulded into shape. They are filled with red or white bean paste, and have coatings of sesame seeds, flour or coconut (at least, the ones I’ve had are!) I’m not going to lie, they are a weird texture and consistency, and you will either love them or hate them…me, I love them! They are sweet and moreish, and something I will take two plates of in the sushi bar!

I bought it for novelty value more than anything, and also because a koi fish means surplus and success in Chinese tradition, so being as I wasn’t cooking any fish, it meant that symbol would be there in this form!

It came inside a fish shape mould, coloured red and we had to prise the rice cake out. The instructions on the back told us how to prepare it, and we cut it into slices and cooked it in the microwave on high for 2 minutes. I wish I took a picture, but I didn’t – it melted down to what can only be described as rice goo!

But, it tasted fine with some ice cream – basically like the outside of a mochi rice cake :)

Chocolate and Cherry Cupcakes – ‘Make It’ Mondays The Table: Year of the Dragon Chinese Banquet