The Table: Year of the Dragon Chinese Banquet

With the invitations sent and the menu planned – with some of the preparation work done for all the Chinese dishes that I would be cooking later that evening, it was time for me to lay the table and decorate for my Year of the Dragon Chinese Banquet! 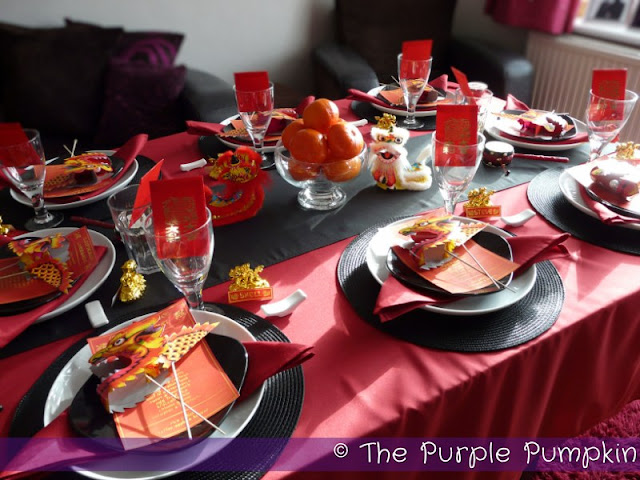 I also bought these Chinese lanterns, which are so pretty, yet so finicky to put together! Between my husband and myself, we eventually got the job done! 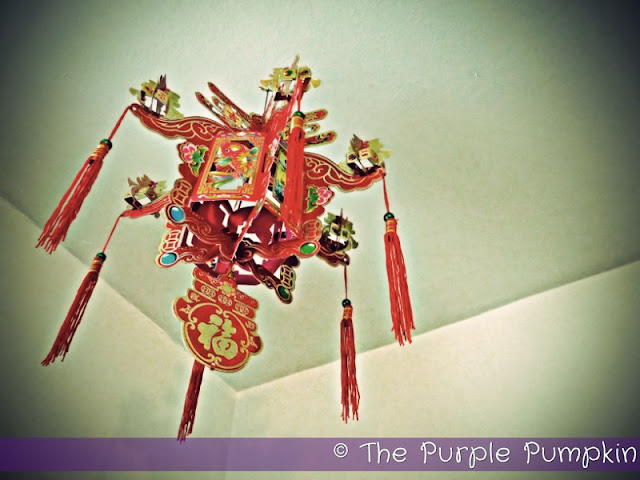 Our living room is a nice size when there isn’t a dining table slap bang in the middle of it! But with a table, it is a little tight, but we always seem to manage! We have a folding dining table that sits out in the hallway when not in use, so with that folded out, I threw over a red table cloth to start with.

Red is the predominant colour used in Chinese New Year celebrations. Red is the emblem of joy and symbolises virtue, truth and sincerity. The sound for the Chinese word for red is “hong” in Mandarin and “hoong” in Cantonese which also means prosperous. Therefore the colour red is both and auspicious colour with an auspicious sound. 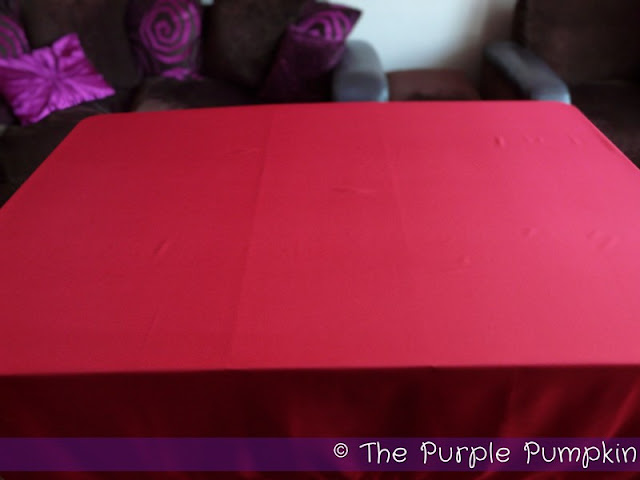 I then placed a black table runner down the centre.

I was out shopping a week or so before my dinner party and saw these black, round place mats that I thought would be ideal, and they were – but a bit too big to get the eight that I needed around the table. I just left the two end places off and I don’t think it looked too odd without them…especially when everything was laid out.

Next up was the dinner plates…

Followed by red napkins that I folded into triangles and placed on each plate. You will also have to start excusing the light changes on these photographs, I laid the table in between prepping food and rushing out to the shops to buy some more plates…

…and the reason for rushing out to buy more plates, was because the black ones I had originally bought were larger than I thought they were and didn’t fit on top of the dinner plate like I had imagined. After checking that the shop that sold them had the smaller ones in stock, it was a what should have been 20 minute round journey, that turned into a good hour or so because of Saturday traffic! And because of that, the time between me starting to lay my table and actually finishing was a good couple of hours!

So with the smaller black plates bought, they were placed on top of each dinner plate/napkin setting, ready for people’s appetizers.

What next? Oh yes, the menus that I had designed and printed off. I put one on top of each plate setting.

Since we were celebrating the Year of the Dragon, I had bought some paper dragon puppets and placed them at each setting.

I then placed a bowl of tangerines and oranges as the centrepiece. If you have read my Sunday Inspiration post about Chinese New Year, you’ll know that the words for tangerine and orange sound like luck and wealth, respectively.

I then placed the dragon name places that I had made.

I then added the red and white Chinese dragon decorations I bought in Chinatown next to the bowl of oranges.

Still not finished! The lucky red envelopes (with a 20p coin inside) were tucked in each glass and I put the chopstick stand by each setting.

With everything on the table you’re probably wondering where on earth the food went?! We have a side table that we served from ;)

On with the chopsticks…

…and the final decoration – bolang gu. These are little drums with a string and pellet attached and you twist them to make the sound. I LOVE the sound of these! I remember as a child being taken to a Chinese New Year celebration in Battersea Park and the sound of the bolang gu are what re-ignites that memory!

With the table all set, it was time to get cooking for my guests and wish them Kung Hei Fat Choi!

Toffee Banana and Toffee Apple My Chinese Banquet – bringing it all together!