Another dish that I should have prepared for my Year of the Dragon Chinese Banquet was Sweet and Sour Pork. I say should because I didn’t actually end up making it on the night, but made it the next day. Cooked correctly, you need to coat the pork in batter and deep fry it, and I just was running out of time to do this. When I did cook it though, I stir fried the pork and skipped the deep frying, this may have made a difference to texture, but to taste I don’t think so… but it would save a bundle of calories!

This sweet and sour pork recipe is by Ken Hom from his book, Complete Chinese Cookery. I’ve never tried an authentic sweet and sour dish before – the ones you get from the take aways in the UK are so sickly sweet and sticky and this wasn’t like that at all. It was a beautifully coloured dish and I think one of the nicest dishes to look at! My husband loved this! 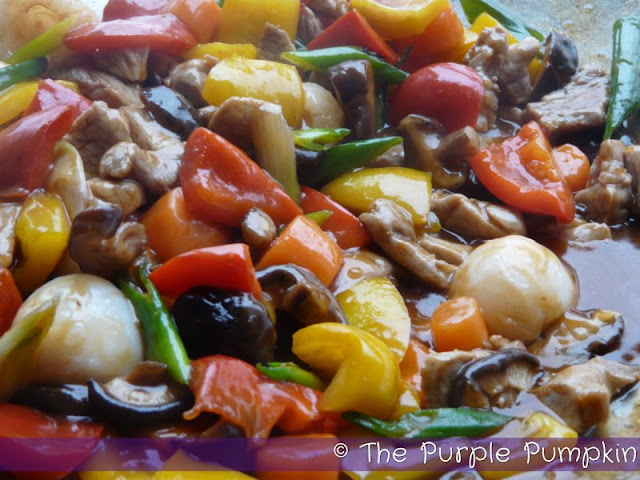 As I said, I didn’t batter and deep fry the pork, but in the method that I’ll put at the end of this post, I’ll include those steps.

I bought pork that was already cubed as that was how it had to be prepared in the recipe, but I ended up slicing it a little thinner to stir fry. I marinated the meat with rice wine, light soy sauce, sesame oil and salt and left to one side – the recipe says 20 minutes, mine ended up being over night! 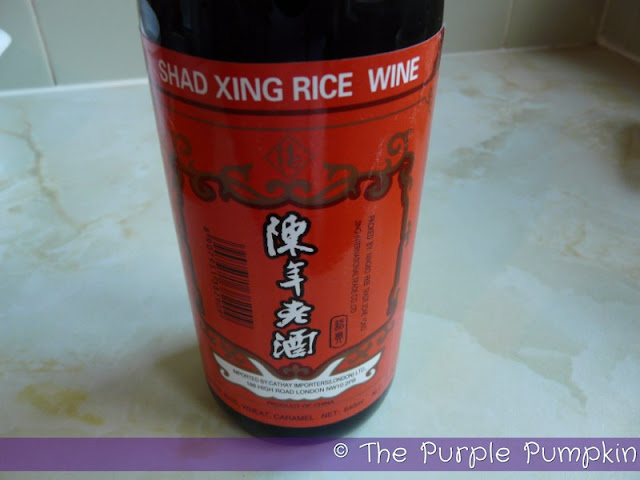 I cut a red and a yellow bell pepper into chunks – the recipe asks for green bell pepper, but I really can’t stand the taste of them!

I then cut up some carrots into chunks, par-boiled them for a few minutes then drained and set aside.

I also cut up spring onions into 1 inch lengths. I cut them on the diagonal so they’d look pretty in the dish.

In this recipe you can use canned lychees or fresh orange segments. I went with the lychees.

With everything prepared, it was wok heating time, until the oil was smoking. I started by stir frying the pork until it was cooked. I then then added the vegetables and stir fried for a few minutes before adding the sauce.

To thicken the sauce I used some cornflour mixed with a little water first and then that mixture was poured in and brought back to the boil – it’s amazing how it thickens the sauce! Turning it down to a simmer, I then added the lychees and mixed everything together well.

We ate it with rice and the other dishes that I cooked the day after the banquet! When I try this again, I will do the deep frying battered pork to see how different it is.

You’ll notice my steps are completely different to Ken Hom’s recipe, but I’ll share his as I had intended to follow that, but it just didn’t work out that way!