Been a while since I typed up a low calorie recipe. I made this Easter weekend, and through one thing or another, just didn’t get the chance to blog about it! But it’s here now, and it took some doing to get this down to under 400 calories – but I just about did it!

This is a Greek dish that is typically very VERY high in calories due to the deep frying of certain elements – potatoes and aubergines, and it contains lamb mince, which again is quite fatty. Not to mention the creamy topping made (by my Yiayia, RIP) with evaporated milk and eggs. All that equals a TASTY dish, but also about 2 zillion calories!

I’ve been making my moussaka this way for many years now. I developed it whilst on (yet another) diet plan, and omitted the potatoes, which were replaced with courgettes. I also cut out the deep frying, by grilling the vegetables instead. The topping got made with low-fat yoghurt and eggs, and the mince, well, I had to use less than normal, buy a lower fat version and drain off the excess fat that came out during the cooking.

As with [most] Greek dishes, it has quite a few steps…I said when making flaounes that I’m sure it’s to keep the women in the kitchen lol. But to me, all the Greek dishes that I make, that have been passed on to me by my beloved Yiayia (grandmother) are well worth the effort…even in lower calorie form!

The full recipe is at the end of this post, or  read through my step-by-step guide to help you make it :)

First, the preparation of the vegetables – courgette (zucchini) and aubergine (egg plant), which I slice not too thick, and not too thin, lengthways…be careful with that knife! A squirt of one-cal oil spray and under the grill to brown off and cook through a little bit. Normally you’d be deep frying these – and aubergines soak up oil like a sponge! LOTS of fat cut out by not doing this! 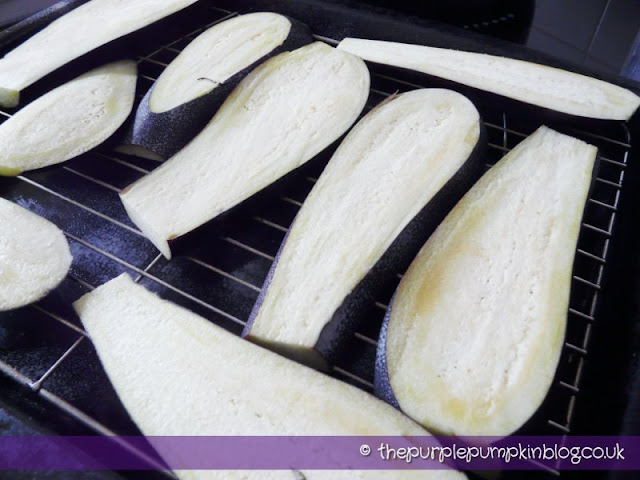 Whilst they are cooking, I make the topping using low-fat Greek yoghurt and a couple of eggs, whisked together with some cinnamon, and then a small handful of grated cheese. Ideally I would have used halloumi, but I only had Cheddar in the fridge.

Remembering to keep an eye on your veggies under the grill, it’s time to make the meat layer.

Into a pan with a squirt of one-cal oil spray to stop the onions and garlic from sticking as you gently sweat them down. I also tend to add a splash of water to steam them a bit. Then in with the minced lamb, which does let out some extra fat.

Once the meat is browned off, I drain off the fat by pouring the mixture into a colander and letting the excess drip away. I also wipe out the pan with a paper towel to get rid of any grease hanging around.

Now the flavourings…cinnamon, dried mint and tomato purée…easy to do, but harder to tell you exactly how much, as I tend to do this by taste. I’ve given measurements in the recipe print out, but if you taste it and want a bit more of any of the herbs and spices – go for it! To me, the combination of cinnamon and dried mint is what defines a lot of savoury Greek dishes. It reminds me of ‘home’.

Did you burn your veggies? I hope not! Now it’s time to assemble everything together.

In an oven proof dish, put a layer of aubergines, covering as much of the base of the dish as you can.

Then, spread the lamb mixture over the aubergine layer.

On top of the meat, place the courgettes.

Finally, pour over the creamy topping and bake in a hot oven for about 30 – 40 minutes until piping hot through and browned on top.

Or in this moussaka’s case…a bit burnt around the edges -__- I really need to get a new oven!

I actually made the moussaka in advance during the day, and popped in the fridge until we wanted to eat dinner. I added a bit extra to the cooking time to allow the fact that it needed to ‘warm up’ from being in the fridge.

I also, made TWO moussakas, one that we ate, and the other got cooled, covered and frozen. To my amazement (it was an experiment) was absolutely fine, once I defrosted it in the fridge overnight and popped into the oven.

First portion out did fall apart on me :D But who cares? It’s a damn tasty lower calorie way to enjoy a normally high fat/high calorie favourite! Add a nice green salad (or a Greek village salad) and enjoy!

For the vegetable layers

For the meat layer