I decided to cook Greek (Cypriot) food for my London 2012 Olympics Opening Ceremony Party. The main dish was one of my (all of my family’s!) favourites – macaroni pie, which I served with Greek salad. 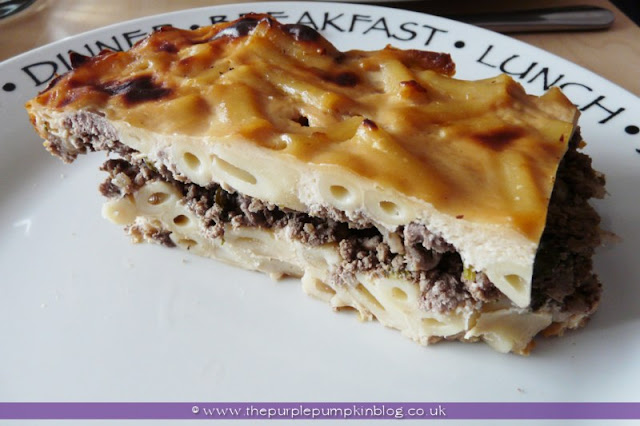 My grandmother was a wonderful cook, and by watching her, I learned many Greek-Cypriot recipes. As much as I try, it is very hard to get my dishes tasting as good as she did! She never wrote recipes down, just knew how to make them, and I had to watch and make mental notes! I guess I’m a bit similar in this, in that I add a bit of this, bit of that, and it works lol. I have come close with several of the dishes that she would make and are my favourites, and this was one of them – macaroni pie, or as it’s probably more known as – pastitchio, although we never called it that!

Sadly, my grandmother passed away a couple of years ago, but her cooking legacy lives on in her son (my dad) and in me. I thank her for the skills she inadvertently taught me.

As I mentioned, macaroni pie is one of my favourite Cypriot dishes, the best way to describe it, is layers of pasta, minced beef and a creamy topping – not too far off from a lasagne really, but so different in taste! For starters, the meat layer is very simple, with just onions, minced beef, salt, cinnamon and fresh parsley. No tomatoes at all. The pasta, is usually tube shaped. I used macaroni. You can also buy large long tube pasta, maybe .5cm in diameter, but I can only buy that pasta in north London where there is a large Greek community. The topping is made with eggs, evaporated milk and cornflour…no cheese at all.

I’m going to tell you how to make it, step-by-step. There are four separate stages – the pasta, the meat filling, the topping, and finally, assembly so this is a dish that requires patience to make!

Whilst that was going on, I got on with the meat layer. In a saucepan I heat a little olive oil and sweat the onions until translucent. I then add the minced beef and brown off, before sprinkling over some cinnamon, salt and finally, stir through some chopped fresh flat leaf parsley. 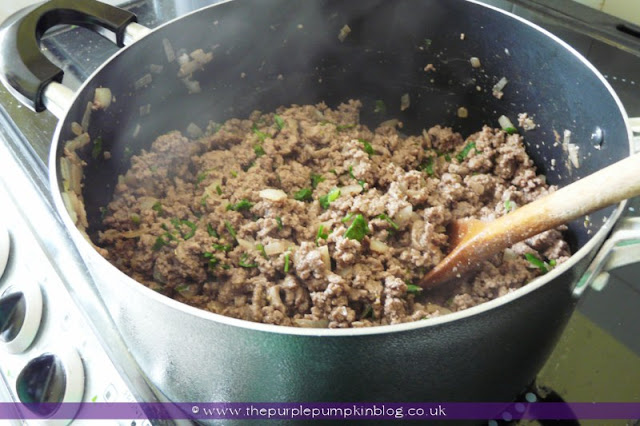 The topping is easy enough to make, but getting the consistency correct may take some work. I made it a little too thick when making this pie for our party, but it still tasted good ;)

Measurements for the cornflour, which is what thickens the topping, is hard to give exact quantities for. As a guide, using an empty can of evaporated milk (which I already poured into a saucepan), I half filled it with cornflour – not packed, but with a few spoonfuls, and then topped up with water, stirring to combine the cornflour and water. I set this to one side, and in a heavy based saucepan, started to heat the evaporated milk and eggs. You have to do this slowly and stir continuously so that you don’t scramble the eggs!

When the milk and eggs are hot, slowly add some of the cornflour/water mix, always stirring. It takes a while, but eventually the cream topping starts to thicken. You may or may not need to use all the cornflour, but you are looking for the consistency of very thick cream.

With all the individual elements now prepared, it’s time to assemble! In a large ovenproof dish, put a layer of macaroni and then add some of the cream topping and give a mix around. The cream helps all the pasta to stick together, so when you cut it, the layers all stay together.

The meat layer then goes on, covering the pasta.

Then another layer of macaroni goes on top.

And finally, the cream topping gets poured on and spread out so that it covers everything. Ideally, it is runny enough to fall down into the pasta underneath. Mine was a little too thick!

Into a hot oven to cook through for about half an hour until browned on top. I made two macaroni pies for the party (enough for yummy leftovers!), and the first one was sadly a bit burnt on top -__- but I could peel off the “skin” and no harm done! The second photo below shows a little better how it will turn out!

We all prefer our macaroni pie to be served at room temperature – it is easier to cut, and sets after it’s had a chance to stand for a while. But there is nothing wrong with serving hot – just wait 30 minutes maybe to allow it too cool a bit before slicing. The first slice is a little hard to get out, but the pie holds up really well – especially if you’ve made the cream the correct consistency so that it goes down through the layers helping it to set.