It’s Wednesday 6th June, and the celebrations for the Queen’s Diamond Jubilee are all over with, so now it’s time for me to tell you all about what we did to celebrate! 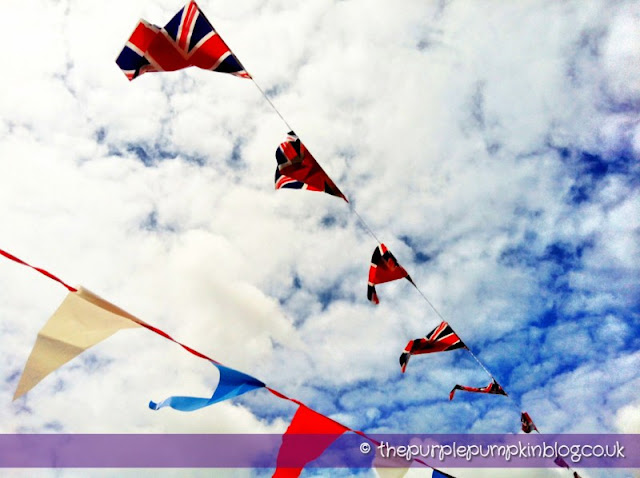 For me, it all started on Friday night when hubby and I went to the supermarket to buy the food we needed for our Diamond Jubilee Big Lunch Party. Only to find that quite a few things were missing from the shelves – caster sugar and icing sugar being the two main ones, along with good vanilla extract…I think everyone must have planned on baking for the Jubilee! I grabbed some imitation vanilla, not as good as the real stuff, but in an ’emergency’ it had to do! I was hoping that we’d find the sugars in the local, smaller shops. We also continued to put up bunting, and I made the labels for the food. 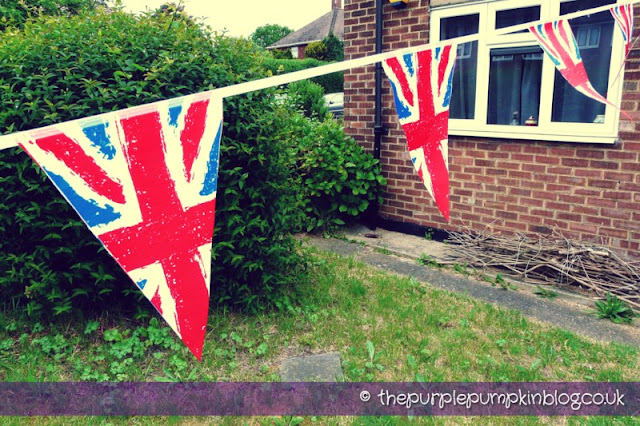 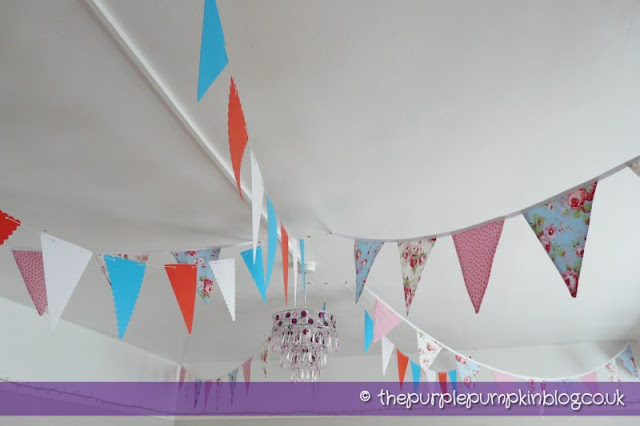 Sadly, it was looking like the Sunday was going to be a wash out, so my planned garden party was off the cards – even with a gazebo up – it was going to be far to cold :( But, as us British do best – keep calm and carry on!

I hadn’t been feeling too well in the days leading up to the Jubilee weekend, so a lot of things that I had planned to do, I simply didn’t get the time. I just about dragged myself to the supermarket with my husband on the Friday night. By Saturday morning I was feeling a lot better, but my baking mojo seemed to have left me, and I was having one disaster after another when it came to getting all the baked goods ready for the party.

It started with ‘Her Majesty’s Macarons (Macaroons)’, which, in the end, didn’t turn out too bad for my first try – and they tasted lovely, and that’s always the important thing! I got egg yolk in my egg white, so had to start over with that. Then, to make the different colours, the instructions said to divide the meringue first, and then add the icing sugar and ground almonds – but by now I think the ratio of dry ingredients to meringue was wrong, resulting in different textured macarons! I will be sharing this recipe, and I will be trying them again!

Then the ‘British Bakewell Tart‘ (recipe to follow), which I screwed up with my baking beans to cook the pastry blind – seems that the pastry didn’t like that and stuck to the baking parchment, resulting in a trip back to the supermarket for more pastry (yes, I didn’t make my own). Then, once that was re-cooked, the filling took forever to set in the oven, and I ended up with burnt edges…however, again, it didn’t affect the taste, and this was by far the run-away dessert success at our party!

What was next? Oh yes, Coffee and Walnut Cake. I followed the recipe to the letter, but I’m sure that there must have been printing errors or something, because they didn’t rise at all! I just looked at these thin cakes and thought ‘I’m going to have to cook this AGAIN’, and it would mean another trip back to the market for walnuts…I really couldn’t be dealing with that, so a brainwave came over me, and I turned the cake into ‘cake shots’ and the cake was saved! So, a recipe for ‘Coffee and Walnut Cake Shots‘ will be following soon.

By now, I was firmly believing that the baking Gods were against me. I was tearing my hair out and wanted to cry…but I soldiered on and tackled my ‘Red, White and Blue Cake Pops‘ My candy melts wouldn’t melt properly, so I couldn’t coat them properly, I ran out of sprinkles…nightmare!

I still had my ‘Lemon and Raspberry Cupcakes‘ to make, and thought, if these go wrong I’m hanging up my baker’s hat for good. And turned out well they did! My photography skills the next day was another matter though, as I couldn’t focus things, or get good light…basically I was having a nightmare weekend when it came to doing the things I love!

I was going to make crown shaped sugar cookies, but decided I didn’t want to push my luck and didn’t bother to make them. With all the baked goods ready, it was time to start on some of the savoury things that I could do in advance, like making lots of sandwiches, and preparing my ‘Empire Rice Salad‘. This was another roaring success, and most was gone by the end of the party.

I marinated the chicken for my ‘Coronation Chicken Skewers‘ and made the ‘Mango Dip‘ for them to be dunked into. Another well received item on the buffet!

Everything else was to be prepared in the morning, so after a hectic day, and by now, well into the evening, it was time for us to fall into bed – absolutely shattered!

The next morning saw my husband getting extra chairs from the shed and calming me down as I flustered around getting everything ready. I don’t know why I was so jittery at this party – a combination of wanting to make sure everything was ‘just right’ as well as my bad baking day perhaps…but I got there in the end, and had a Diamond Jubilee Big Lunch Party fit for a Queen ;)

Whilst he was sorting out the seating arrangements, I was making the ‘Diamond Jubilee Trifle‘, which I decorated on top with berries and tried to replicate the Union Jack. I think it look awesome! And a real dessert centrepiece!

I set out [some of] the baked goods onto the table. This wasn’t without mini disaster. My dear Mum had bought a cardboard, Union Jack cupcake stand, which collapsed on me, luckily I saved the tumbling cupcakes! So I dug out my vintage looking cupcake stand instead. My cake pops were way too top heavy, and I just didn’t have the right sort of stand for them, but got them just about right in the jars I had painted last month, with the help of some tissue paper.

I then made the various drinks – a Raspberry Slushie and a jug of Jasmine Iced Tea along with some cloudy lemonade, elderflower and apple cordial and strawberries and cream cordial.

And finally laid all the food out which included sandwiches cut into triangles and filled with honeyroast ham, cheese and pickle, smoked salmon and cucumber and egg mayonnaise and cress.

I put together a garden salad with rocket, watercress, cucumber, onion and tomato; made mini yorkshire puddings with beef and horseradish, and cooked off some shop bought steak and ale pies.

I also made my own sausage rolls and cheese and onion puffs – the latter went down a storm – should have made more!

My dad then told me off for using ‘valuable stamps’ to make the food picks. I just lol’d at him – he used to collect stamps, so he obviously has a bond with them or something!

Another dessert section with the trifle, bakewell tart, coffee and walnut cake shots and scones with clotted cream and jam.

You can see my Union Jack teapot which I so lovingly painted, along with some other decorations that I bought.

I hate my kitchen with a passion and am patiently waiting for a refurb, so the scrapbooking paper went up on the tiles to cover electical sockets! Not the most stylish, I know – but making the best of what I have!

With everything set up, it was time for the guests to arrive and the festivities to begin! We had a great day, with lots of food and laughter.

And the concert in front of the palace on Monday evening was fab – the lighting on Buckingham Palace and the fireworks, and the patriotism from the crowd was something to make you feel proud to be British.

Tuesday brought an RAF flypast which goes over my parent’s house – these are my Instagram photos.

Ending with the Red Arrows – always a sight to behold! (And this was a picture from the TV, rather than seeing it in real life!) Whilst we saw the Red Arrows fly over, they don’t let off their coloured smoke until flying over Buckingham Palace.

Unfortunately, most of the weekend was a wash out with rain and cold and grey skies, but it didn’t dampen the British spirit, and it was a truly momentous, historical occasion that we will never see again in our lifetime, and probably not of that of my children, or my children’s children. God Save the Queen!