Macarons…not to be confused with macaroons…are sweet meringue confections made with egg white, icing sugar and almonds, among other ingredients. They are made in two halves, with a distinct texture to the outside, flat on one side with a slight dome on the other – two halves are sandwiched together with buttercream. A few weeks ago my husband and I went to Borough Market in London. He bought me a macaron (I’ve had them before in France) and for one delicate macaron it cost £1. ONE of our British pounds for just ONE MACARON?! Insanity! I have read that they are tricky to make, requiring aging of egg whites, and precise mixing, but having found a recipe in the Tesco magazine, I thought I’d give them a go for our Diamond Jubilee Big Lunch Party and ‘Her Majesty’s Macarons’ were born :) I would say I had part success with my macarons – as you read through this blog post I’ll tell you what my pitfalls were!

Here are my macarons… As you can see I sorta got them right – and for a first try I was very pleased with them (and everyone commented how lovely they were too!). 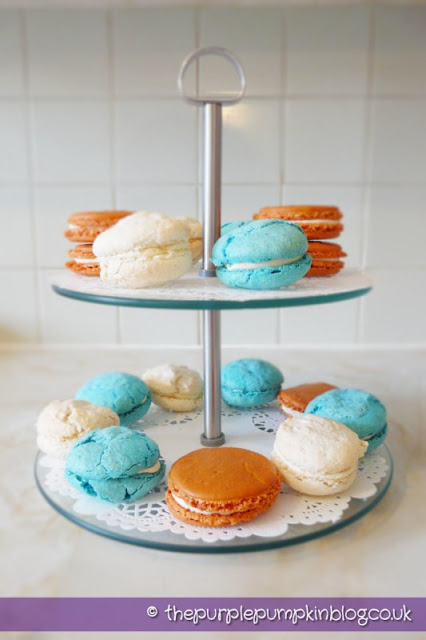 The recipe told me, to make different colours using the same batch, to divide my meringue (which you whisk up first) and then divide your icing sugar and ground almonds and fold into the divided meringue. You then mix for precisely 60 seconds, using a spatula rather than a wooden spoon. Doing it this way, I’m sure the ratio of dry ingredients to the meringue was off, resulting in the different textures of the macarons. 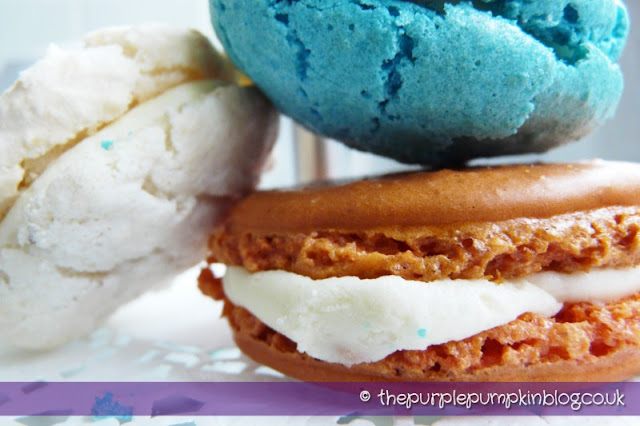 The red ones I felt were the closest in texture to those that I’ve bought in shops – but they were a little flat. They had the nice ruffled edges, and the crisp, smooth outer shell. I felt that I got the dome about right on the blue and white macarons, however, the blue ones were very fragile, and the white ones, a little dense. Next time I make these I’m going to do one batch and see how they turn out. Considering the expense of these to buy (and not being able to buy them in many places) it’s great to be able to make my own – and I won’t be defeated!

When it comes to making macarons there are some things worth noting and doing to give your culinary efforts the best chance! ‘Age’ the egg whites by leaving for 24 hours before using them. I’m not sure what this does, but I kept reading that you should do this. I didn’t…I left mine only for a few hours (but like I said, my efforts weren’t too bad for a first try were they?!) When you have piped your discs out, leave them to dry for an hour. this gives them a skin which in turn creates the unique texture of macarons and allows the ruffles on the flat side to form. And finally, when taking them out of the oven, slide the baking parchment with the macarons still attached carefully off the baking sheet, sprinkle the empty sheet with cold water and slide the parchement and macarons back onto the baking sheet. This makes the macarons easier to remove.

With quite a lot of text for a recipe post, let me get started on telling you how I made my macarons!

Macarons can be made is so many different flavour/colour combinations, but I kept mine vanilla, and red, white and blue for the colours of the Union Jack.

Prepare your baking sheets to pipe the meringue onto. Cut baking parchment to size, and then using something round – a cookie cutter perhaps, draw out circles 3 – 4cm in diameter onto the reverse of the baking paper. Keep them spaced apart enough so that they don’t run together (like some of my red ones did!). Secure the paper to the baking sheet by blobbing some meringue in the four corners to make it stick.

You need to measure your egg whites in weight. This recipe requires 125g egg whites, which was just under 4 eggs – what joy that was to get right! And you may remember I mentioned my first mess up by managing to get yolks into my egg white >_< With the eggs weighed (and aged as I said earlier) it is time to whisk them with egg white powder and a pinch of salt

Use an electric whisk to do this, because you will be beating those egg whites forever otherwise!

You then whisk in the caster sugar until stiff peak stage.

If you want to make just one colour, now is the time to gently fold in a few drops of food colouring and ½ teaspoon of vanilla extract. If you want to make several colours, you need to divide the mixture equally (as you can, and colour in separate bowls).

With the meringue now coloured, it is time to fold in the dry ingredients – icing sugar which has been seived and ground almonds. You have to do this for precisely 60 seconds – why? I do not know – maybe to stop them from being overworked?

To make your little discs of meringue, you can either pipe onto the baking sheet with a piping bag fitted with a 1cm plain nozzle, or using a teaspoon if you don’t have a piping bag. The mixture isn’t too runny (if you do it right) so they won’t spread out too much (although my red ones were a different story!) Just use your common sense when preparing your discs! If you get peaks on the top of your macarons when piping, just dampen your finger with some water and pat down.

I thought my blue ones came out perfectly – yet when cooked they were the most fragile!

The white ones I didn’t combine very well and you could really see the almonds in these.

The red ones, flat as pancakes, and ran out – yet gave the most macaron texture (as I know them to be from buying in the shops!) out of the three colours!

As I said earlier, leave to dry for an hour, and having pre-heated your oven to 170C/150C fan/Gas3, bake the macarons for 10 – 12 minutes until just set and crisp. Remove from the oven, and remember my tip about the water on the baking sheet? (quick…scroll back!) Well, nows the time to do it! When cool, transfer the macarons to a wire rack.

So, as you can see, the red ones – very flat – but have the nice ruffley edge, and the texture on the top resembles a macaron.

These ones completely cracked. Research online tells me the reason for this was that my oven may have been a little too high.

I thought the white ones were a little lumpy – you could really see the ground almonds in them. And they don’t have the ruffly feet either *pout*

Once cooled, you can fill them with buttercream made with softened butter, icing sugar and vanilla extract. Handle the macarons carefully whilst you pipe in the buttercream and press them together!

And voila! Her Majesty’s Macarons!

Now, I know I had some problems, and I really had lost my baking mojo on the day that I was preparing everything for our party, but I loved making macarons! I got so excited as I piped them out and watch them form, and I just can’t wait to be able to make them again. I also can’t wait to experiment with different flavours, so stay tuned for further macaron instalments!

If you decide to give these a try, I would love to see how yours turned out :) Join The Purple Pumpkin Blog on Facebook to share your photos and experiences!

For the buttercream filling

*To make different colours in the same batch, divide the icing sugar and almonds in half (or thirds) and combine in different bowls. Continue with step 3 and divide the meringue mix between two (or three) bowls. Add the colourings and fold one bowl of the almond and icing sugar mix into each bowl of meringue.