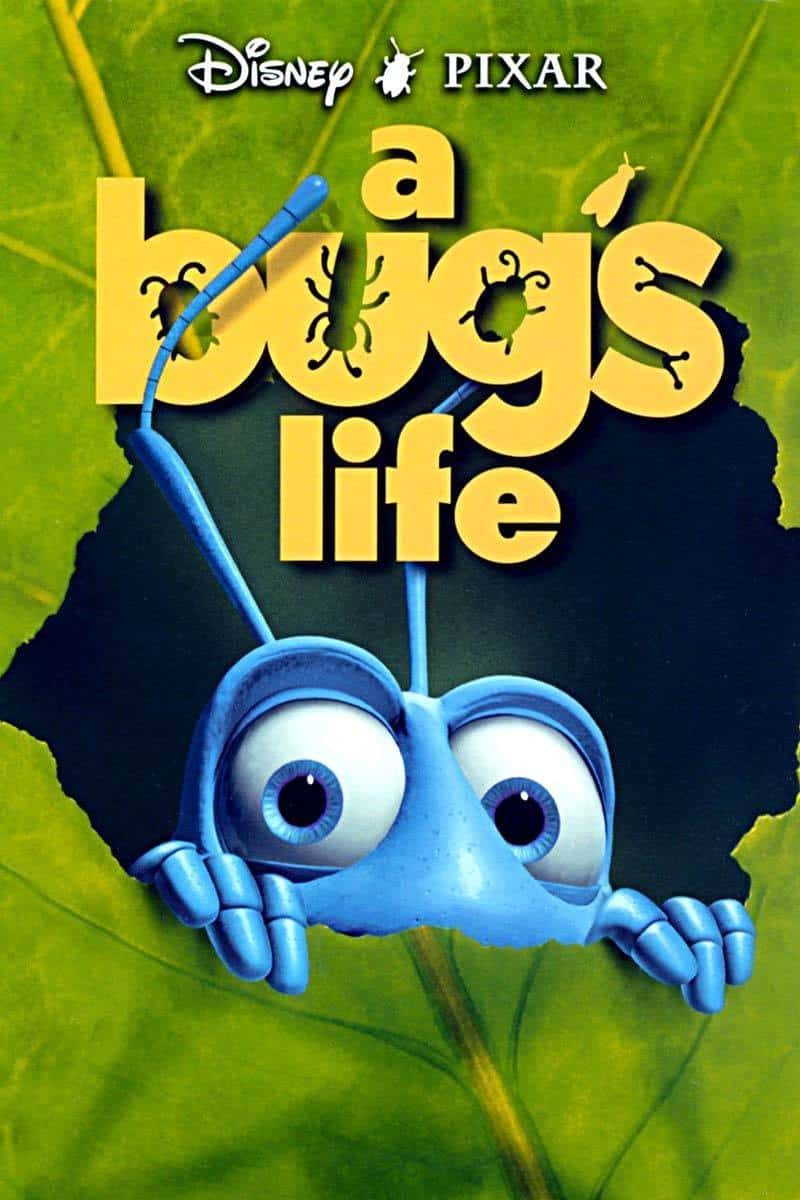 This week’s movie, is another Disney Pixar one, and my husband’s favourite – a bugs life. It’s a great movie, with fantastic animation and attention to detail, and fabulous voice actors. I dearly long for a bugs life 2, I hope they make one, one day!

Flik, is a worker ant (and would-be inventor) he, along with the colony of ants are collecting food for the colony’s oppressors, a gang of grasshoppers, led by Hopper. The grasshoppers arrive each season, expecting the ants to have collected food for them, but this season, one of Flik’s inventions goes awry, and all of the food is lost. Whilst the colony wait nervously underground, with their Queen, and Princess Atta (Queen-in-training), they hear how angry Hopper is upon finding that there is no food. All eyes fall to Flik when they realise it is his fault. The gang of Grasshoppers break through the ground and threaten the colony, saying that they will be back and will be wanting twice as much food.

A council meeting is called to come up with ways to gather all the food – and for themselves for the winter too. Flik suggests that they go into the big city (a heap of trash under a trailer) and find some warrior bugs to help them defeat Hopper and his gang. The council decide this is a good idea… but only to get Flik out of the way, so they can formulate their own plan.

Flik takes off to the big city, and stumbles upon what he believes to be a band of warrior bugs, but are just a troop of circus bugs that have recently been dismissed by their money-hungry ringmaster, P.T. Flea. The bugs in turn, mistake Flik for a talent agent and accept his offer to travel with him back to Ant Island. After they arrive, the circus bugs and Flik both discover their mutual misunderstandings during a welcome performance by the ants.

As the circus bugs attempt to leave, the colony is attacked by a bird, which grabs Dot, the baby princess ant. The circus bugs save her and earn the respect of the ants. Flik begs the circus bugs to stay and continue to play the charade of being warrior bugs, and they agree. He then comes up with a plan to build a bird to scare away Hopper and his gang.

During the celebration party, P.T. Flea comes looking for his bugs, and the truth comes out. The ant colony become frantic; they exile Flik and he leaves with the circus bugs go and their manager, and the ants try and gather food for Hopper… but there just isn’t enough. The gang take over the colony, demanding their winter food supply. Dot runs off, and overhears some grasshoppers say that they are going to squish the Queen. She catches up with Flik and tells him what is happening, and persuades him, and the circus bugs to come back and help.

The decoy bird is launched, and the circus bugs play up their parts of being injured. P.T. Flea sees this and sets fire to the bird, exposing it as a decoy. Hopper beats Flik in retaliation, and proclaims that the ants are lowly life forms and live to serve the grasshoppers. However, Flik retorts that ants are actually independent and that the grasshoppers need them…

First rule of leadership: Everything is your fault. – Hopper

It’s the same year after year, they come, they eat, they leave; that’s our lot in life. It’s not a lot, but it’s our life. – Queen

Hopper: I swear, if I hadn’t promised Mother on her deathbed that I wouldn’t kill you, I would kill you!
Molt: And believe me, no one appreciates that more than I do.
Hopper: Shut up! I don’t wanna hear another word out of you while we’re on this island. Do you understand me?
Molt: [whimpers]
Hopper: I said do you understand me?
Molt: Well, how can I answer? You said I couldn’t say another word!
[Hopper raises his fist to hit him]
Molt: Aah! Remember ma!

They can’t know the truth! The truth, you see, is bad! I will be branded with this mistake for the rest of my life! My children’s children will walk down the street and people will point and say, “Look, there goes the spawn of Flik the Loser”! – Flik

I’m the only stick with eyeballs! – Slim

But I *am* flying! And from way up here you all look like little ants. – Heimlich

Hopper: Let this be a lesson to all you ants! Ideas are very dangerous things! You are mindless, soil-shoving losers, put on this Earth to serve us!
Flik: You’re wrong, Hopper. Ants are not meant to serve grasshoppers. I’ve seen these ants do great things, and year after year they somehow manage to pick food for themselves *and* you. So-so who is the weaker species? Ants don’t serve grasshoppers! It’s *you* who need *us*! We’re a lot stronger than you say we are… And you know it, don’t you?

Why I Love a bugs life