The Princess and the Frog 88/#100DaysOfDisney

Home » Everything Disney » The Princess and the Frog 88/#100DaysOfDisney 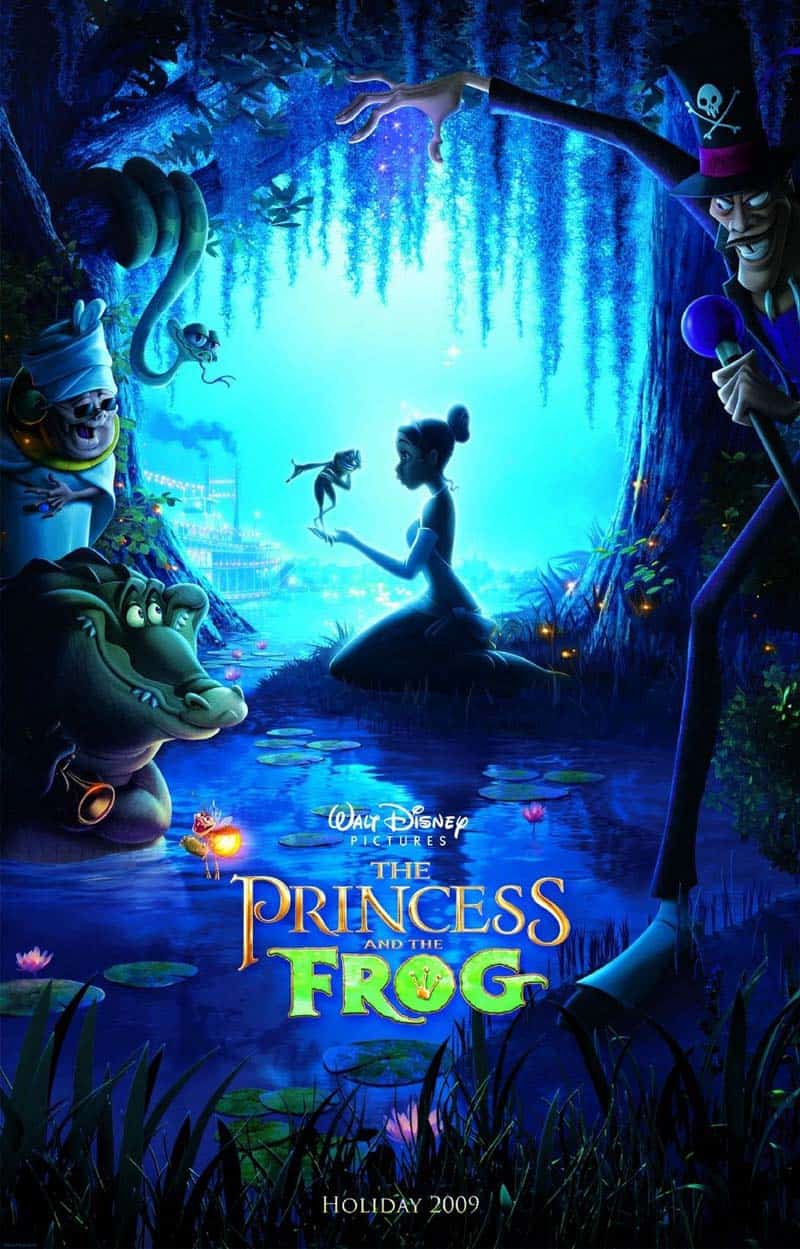 In 1912 New Orleans, Tiana’s mum is reading the story of The Frog Prince to her, and her friend Charlotte. Whilst Charlotte finds it ever so romantic, Tiana this it is gross, and says she would never kiss a frog. Years pass by, and in the mid 1920s, Tiana is now working two jobs to save up to open her own restaurant, a dream she shared with her late father.

Elsewhere, Prince Naveen of Maldonia has arrived in New Orleans with his valet, Lawrence, having been cut off by his parents. Naveen, wanting to improve his financial situation feels he should marry a rich Southern belle, and it’s quite clear that would be Charlotte! Her father, “Big Daddy”, is a rich sugar baron and is hosting a masquerade ball in honour of Naveen. Charlotte hires her friend Tiana to make beignets for the party, paying her enough to buy an old sugar mill to turn into her dream restaurant. The thought of marrying a prince, sends Charlotte over the edge of excitement.

Prince Naveen and Lawrence run into a voodoo witch doctor, Dr. Facilier (known as The Shadow Man). Facilier charms and convinces them he can make all of their dreams come true. However, neither man gets what they are expecting; Naveen becomes a frog, while Lawrence is given a voodoo charm that makes him look like Naveen. Facilier intends for Lawrence to marry Charlotte, after which he will kill Big Daddy La Bouff and claim his fortune.

At the ball, Tiana discovers that she may lose the mill to a higher bidder, and whilst on the balcony, sees the frog Naveen. He thinks she is a princess, as she is dressed up for the ball, and asks for a kiss to break the spell. Which it doesn’t, as she isn’t really a princess… instead, Tiana also turns into a frog, and they both escape to the bayou.

Tiana and Naveen meet Louis – a trumpet playing, jazz loving alligator, and Ray, a Cajun firefly who is in love with Evangeline, who he thinks is another firefly, but is really the evening star. Louis and Ray offer to help the frogs reach Mama Odie, a voodoo priestess, who they think will be able to undo Shadow Man’s curse. Along the way, Tiana and Naveen begin to develop feelings for each other. Meanwhile, Facilier makes a deal with the voodoo spirits, offering them the souls of the people of New Orleans in exchange for finding Naveen.

When the four find Mama Odie, she tells them that Naveen must kiss a true princess in order to break the spell. They return to New Orleans to find Charlotte, who is the princess of the Mardi Gras Parade, but only until midnight. Naveen tells Ray he loves Tiana and is willing to give up his dreams for her, but before he can tell her directly, he is captured by the demons and brought to Facilier… is it all over for Naveen and Tiana? Watch the film to find out!

[first lines]
Eudora: [telling a story to Tiana and Charlotte] “Just at that moment, the ugly little frog looked up with his sad, round eyes and pleaded, ‘Oh, please, dear princess! Only a kiss from you can break this terrible spell that was inflicted on me by a wicked witch!'”
Young Charlotte: [to Tiana] Here comes my favorite part.
Eudora: “And the beautiful princess was so moved by his desperate plea that she stooped down, picked up the slippery creature, leaned forward, raised him to her lips, and kissed that little frog.”
Young Charlotte: Aww.
[Tiana gags]
Eudora: “Then lo and behold, the frog was transformed into a handsome prince! They were married and lived happily ever after. The end.”

Tiana: There is no way I’m kissing a frog and eating a bug in the same day.

Charlotte: Goodness gracious! This is so much to absorb. Let me see if I got this right. If I kiss you before midnight, you and Tiana will turn human again, and then we gonna get ourselves married and live happily ever after! The end!
Prince Naveen: Yeah, more or less. But remember, you must give Tiana all the money she requires for her restaurant. Because Tiana…
[glances at Evangeline, the star]
Prince Naveen: She is my Evangeline.
Charlotte: Anything you want, sugar.
[applies lipstick]
Charlotte: Pucker up, buttercup!

Mama Odie: Gumbo, gumbo, in the pot! We need a princess. WHAT YOU GOT?

Mama Odie: Good to see you again, Ray. How’s your grandmama?
Ray: Oh, she fine, although she got into a little trouble for flashing the neighbors again.
Mama Odie: Ooh! I like that gal!

Reggie: These two ain’t like no frogs I ever seen. They smart!
Tiana: And we talk, too!
[Frog-hunters scream and paddle away]

Mama Odie: JuJu! Why didn’t you tell me my gumbo was burning? I have to do everything around here!

Prince Naveen: Excuse me, but your accent, it is funny.
Ray: I’m a Cajun, bro. Born and bred in the bayou! Y’all not from ’round here, are ya?
Prince Naveen: Actually, we are from a place far, far away from this world.
Ray: Go to bed! Y’all from Shreveport?

Ray: What’s up?
Prince Naveen: I love her. Tiana is my Evangeline…

Why I Love The Princess and The Frog