Last Friday saw hubs and I on a train to Tobacco Dock in London for the Taste of Christmas Show 2013. We went to the show in 2011 at the ExCeL Centre, but gave it a miss last year as the dates clashed with something else.

One of our favourite TV chefs – Hugh Fearnley-Whittingstall of River Cottage was going to be at the show (again – we met him in 2011), so we were excited to watch him cook again, as well, of course, to be trying out samples from the artisan vendors and eating food from the pop up restaurants! 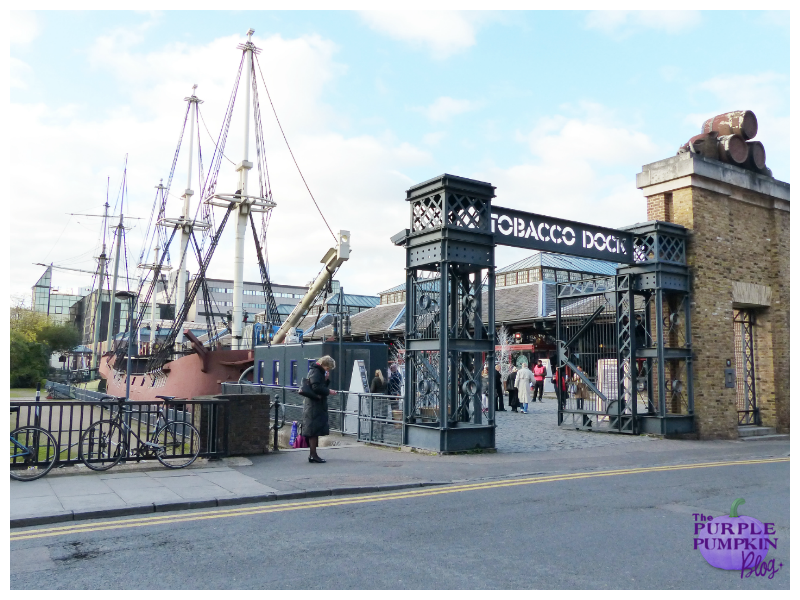 Neither of us have been to Tobacco Dock before, and I have to say what a lovely venue for a food show it is. Normally they’re in big exhibition halls which feel very clinical and cold (in my opinion) but with the river side location, the stone walls, little nooks and crannies and the history of the Grade 1 listed building, it made the event feel cozy and welcoming. I have to say that I just LOVED the place! 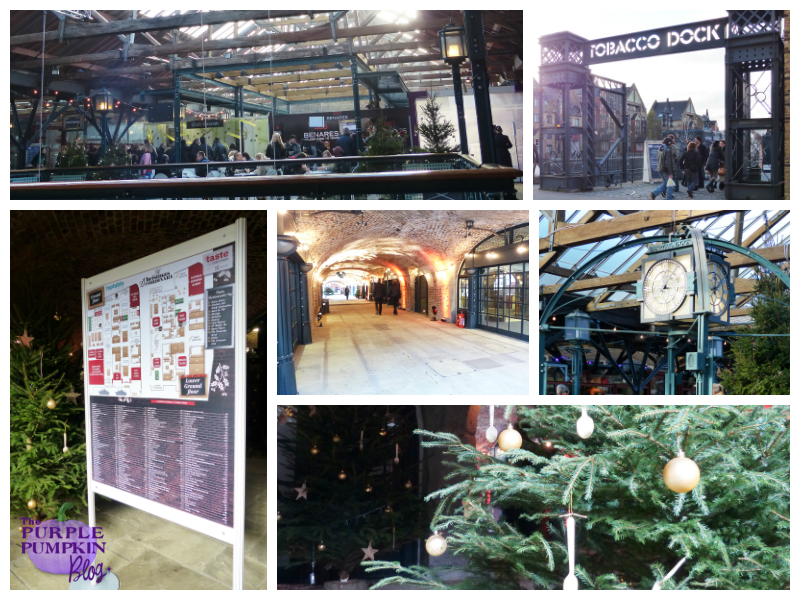 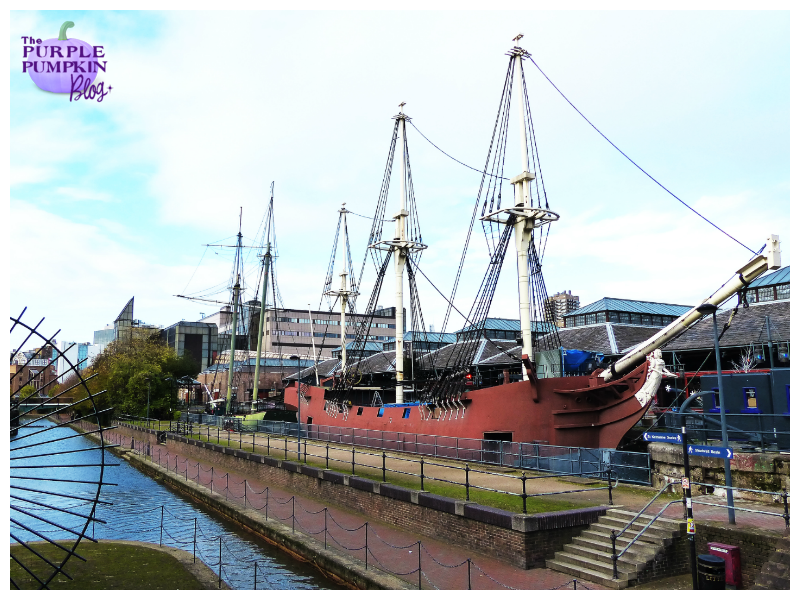 With evergreen Christmas trees adorning the venue and Christmas songs sung by The Polka Dot Dolls, there was a festive atmosphere about the place. There were lots of lovely artisan products for sale – some of whom we saw the other week at the BBC Good Food Show.

As it approached midday, I suggested we buy something with our crowns (the show’s currency to purchase from the pop up restaurants and some stands too) before it got too busy. Good move too, no sooner had we sat down with our choices, huge queues were starting to form.

We bought, from Barbecoa, (Jamie Oliver’s barbecue restaurant brand) a really, really tasty pulled pork, chilli corn bread and slaw plate for 5 crowns. (£1 = 1♔). The pulled pork was hot and spicy – I know that Jamie Oliver loves his chillies! The slaw was cabbage and celeriac – I’m not a fan of celery in the slightest, but even I managed to eat some of it…it helped to cool down the pulled pork!

From Disco Bistro, we bought (also for 5♔) a Disco Burger – I love the look of mini burgers! This one had a rare breed patty, bun sauce, cheese, pickled onions, pineapple bacon jam…WOW, this was soooo good! Really juicy and full of flavour – shame it was such a small burger!! Although, I know that they are just tasters at this sort of event ;)

To drink, we bought some fruity cider – delicious – and dangerous! Dangerous because it doesn’t taste of alcohol and is very easy to knock back! *hic*

We continued to walk around the show, surprisingly for us, not buying too much as by now it was very busy and getting near to stands was a bit tricky. I do love taking photographs (as you know) so was quite happy to walk around and snap away. I do wish we’d bought the colourful pasta that you can see below – how festive does that look?

We hadn’t kept too close an eye on the time, so the Electrolux Taste Theatre was already full by the time Hugh Fearnley-Whittingstall was cooking. We were able to watch from outside though – he was preparing oysters and then a dish with fruit – since that is the basis of his latest TV show and book.

Hugh then went into the room next door to do a book signing, and we met up with my husband’s parents who had also visited Taste of Christmas on the same day as us. We bought Hugh’s new book ‘River Cottage Fruit Everyday‘ and then lined up to meet him. Had a little chat, and mentioned how we met him a few years back when he launched his Veg book – not that he was going to remember us lol! But I mentioned my blog to him – you never know, he might read this!! If you are, Hugh – hello!!

With some crowns still burning a hole in our pocket, and not being able to exchange them back for money, we bought a couple of plates from Benares – a Michelin-starred Indian restaurant. I had a keema paratha and hubs had a chicken tikka masala and rice…both really tasty. The meat in my keema paratha was just delicious, and the sauce on the curry was creamy and full of flavour. If we can ever afford to, we might have to pay a visit to the restaurant in Mayfair!

All meals have to end with something sweet – so here is a selection of just some of the sweet goodies that were available. The cupcakes you see are caketails – cupcakes for grown ups! I got talking to the authors of the book – Natalie Saville and Jill Collins who run The Great Little Cake Company and bought their book ‘Caketails – Intoxicating Cupcakes for Grown Ups‘ and 3 of their cupcakes to try when we got home. I promised I would be blogging about the caketails, so here I am :)

The cupcake with the naughty little gingerbread peeps is ‘Sex on the Beach’, and the one with cherry blossom is a sake based caketail – ‘Blushing Geisha’. They look really fun and would be perfect for a hen night!

The other cupcake with the penguin meringue on top is a ‘Peppermint Penguin’ caketail with Crème de Menthe and an Oreo cookie on the bottom! We then got talking about all the different Oreo cookies that are available in the USA – including mint ones that would be fab to use in these cupcakes – just a shame we can’t buy them here in the UK :(

My favourite was definitely the Cosmo – with vodka and Cointreau soaked cranberries inside the sponge and topped with Cointreau buttercream this was the perfect adult cupcake! I can’t wait to try the recipe out in the book!

The Martini had a nice surprise in the centre with some vodka lemon curd filling, which I thought was delish – one for the guys! And the Mulled Wine cupcake had a warming flavour from cinnamon and cloves…and brandy…and red wine…perfect for Christmas!

I can’t wait to be able to cook more caketails from their book, which is filled with gorgeous photography and that I loved just flicking through. There are 18 recipes – each with 3 different topping design ideas and recipes. There are caketails for Valentines, naughty but nice, black tie, summer, Halloween and Christmas, so the book will have you making boozy cupcakes all year round if you like. I think you’ll know what I’ll be trying out next Halloween, right?

And so ends our day at Taste of Christmas 2013, we had a really great day and tasted some fab food along the way! Taste of Christmas is organised by Taste Festivals and hold foodie festivals all over the world – there might be a show near you…I know we’re going to try and attend the London show next Summer!