How To Make Potato Latkes for Hanukkah (Chanukah)

Jews across the world are currently celebrating Hanukkah, and to celebrate here on The Purple Pumpkin Blog, I’m sharing how to make potato latkes; a traditional food enjoyed at this time of year.

I will just say that I am not Jewish, but my husband is, and we both take on each other’s traditions. Variety is the spice of life as they say, and I love that we are a multi-cultural family! 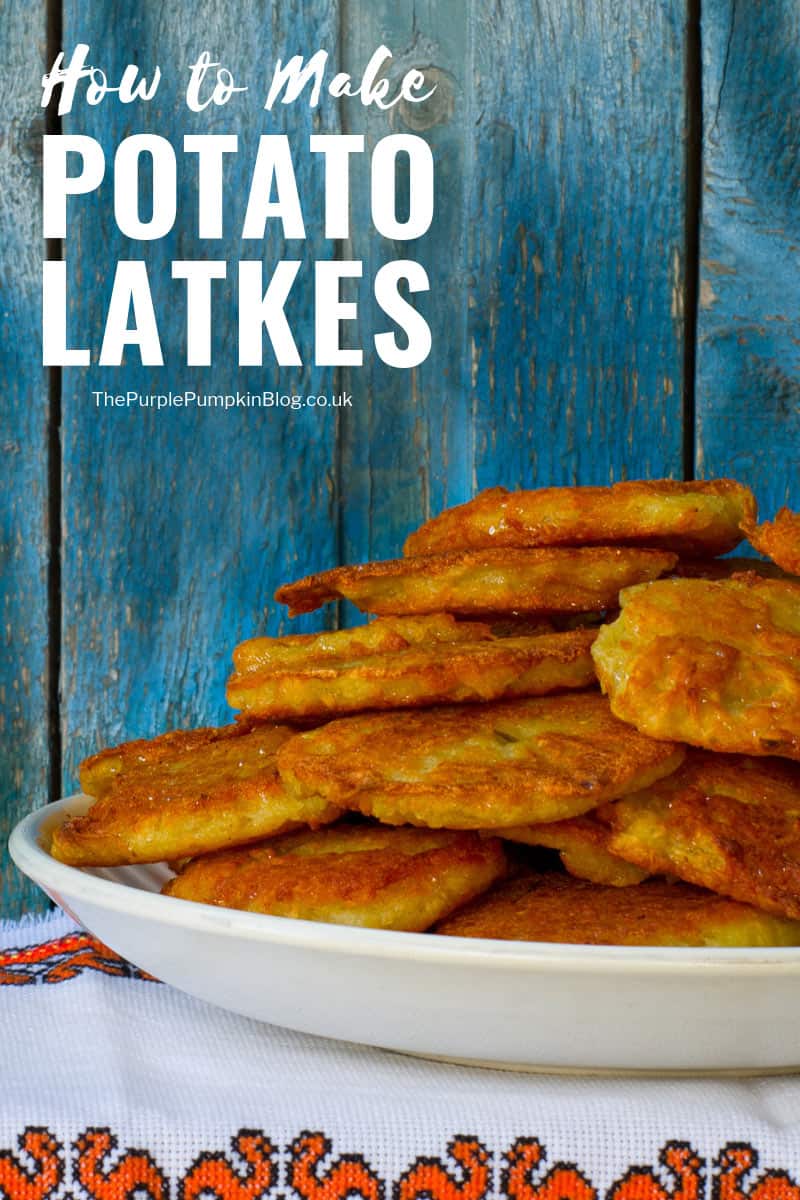 How To Make Potato Latkes

Before I get to the potato latkes recipe, let me tell you a bit about Hanukkah – the Jewish Festival of Lights.

You may also have seen Hanukkah written as Chanukah – in fact, there are several ways of spelling it, but Hanukkah and Chanukah are the most widely used.

The answer comes down to transliteration. Unlike translation, transliteration is when you “change (letters, words, etc.) into corresponding characters of another alphabet or language.” In Hebrew, the language from which the Jewish festival originates, the word for Hanukkah is not easily transliterated into English. This accounts for why there are so many spelling variants.  – Dictionary.com


For arguments sake I’m going to use Hanukkah throughout this post!

Hanukkah is observed for eight nights and days, starting on the 25th day of Kislev (according to the Hebrew calendar) which may occur at any time from late November to late December in the Gregorian calendar. In 2018 it begins on the evening of 2nd December and ends on the evening of 10th December. 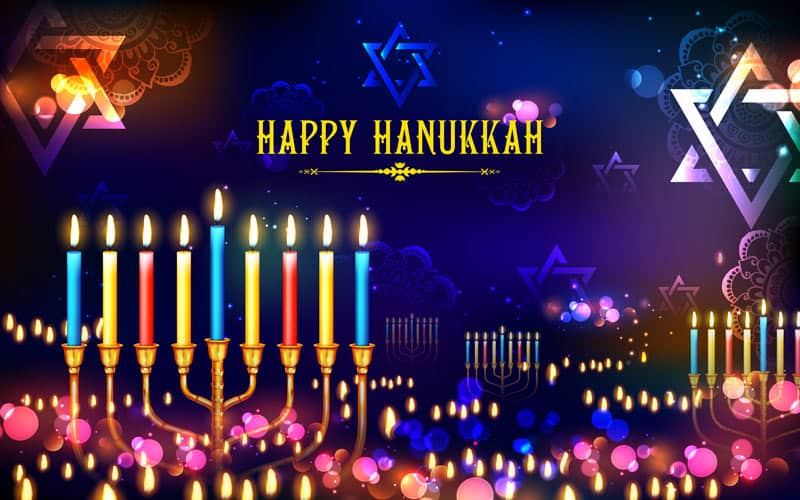 A GREAT MIRACLE HAPPENED THERE

Hanukkah, also known as the “Festival of Lights,” is an eight-day celebration honoring the trials and tribulations that the Jews living in Israel faced in 166 B.C.

A small band of Jews known as the Maccabees, named after their leader Judah Maccabee stood up against a large army to protect their land and the holy temple. Beating all odds, the Maccabees successfully reclaimed the Second Temple from their enemies who desecrated and destroyed it.

Following the battle, Judah lead the Maccabees in cleansing the Second Temple, rebuilding the altar, and lighting the menorah, a seven-pronged candelabra that is supposed to burn bright every night. However, they only found enough oil to last one night. Miraculously, the menorah remained lit for 8 days, allowing the Maccabees to cleanse the temple and find more oil.

Today, Jews around the world celebrate the miracle of Hanukkah with family, food, and fun. At sundown on each night of Hanukkah, families and communities light menorahs, share a feast of foods cooked in oil, such as fired potato latkes, exchange presents, and play games with a dreidel, a four-sided top with Hebrew letters on it that translate to “a great miracle happened there.”

The night is highlighted with singing and dancing to festive music. These joyous celebrations of laughter, song, and storytelling help us remember the story of the Maccabees and the miracle of Hanukkah. 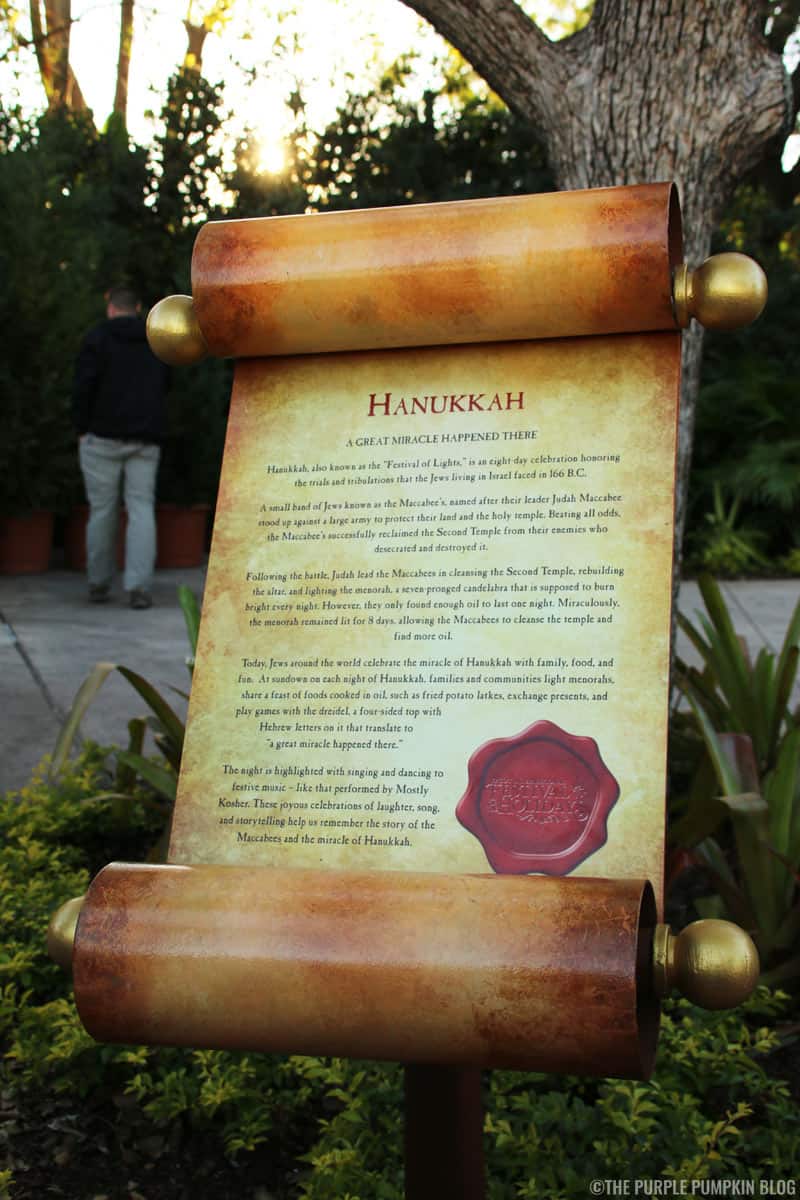 This post contains Amazon Affiliate and other affiliate links. If you clicked the link then made a purchase, a small percentage of the sale price would be paid to me. It doesn’t cost you anything more but it helps keep the lights on over here so that I can create more content for you!

The Hanukkah menorah, also chanukiah or hanukkiah, is a nine-branched candelabrum lit during the eight-day holiday of Hanukkah, as opposed to the seven-branched menorah used in the ancient Temple or as a symbol.

One branch of the hunukkiah is offset higher or lower than the other branches and is called the shamash (“helper”). It is used to light the other eight candles. Each night, one additional candle is lit by the shamash until all eight candles are lit together on the last night of Hanukkah.

After the lighting of the candles, it is customary to spin the dreidel – a four-sided spinning top.

Each side is imprinted with a Hebrew letter: נ, ג, ה, פ which is short for Nes, Gadol, Haya, Sham, and means “a great miracle happened here” referring to the miracle of the oil that took place.

On Hanukkah, children are often given chocolate money in celebration of the festival.

In Yiddish, the translation of the word money is gelt. The chocolate coins given out on Hanukkah are wrapped in silver or gold foil.

Food cooked in oil is traditional at Hanukkah. Fried potato pancakes, called latkes (in Yiddish and levivot in Hebrew), are the most popular Hanukkah food. Latkes are shredded potatoes mixed with onion, egg, flour and seasonings, then formed into small pancakes and fried in oil.

A sufganiyah (or sufganiyot for plural), is a round, deep-fried doughnut typically filled with strawberry jam and topped with powdered sugar.