Remember the bunting that I started and posted about on my ‘Make It’ Mondays post earlier in the week? Well, it’s all finished – with a little help from my mother in law – and all hung up in preparation for tomorrow’s Diamond Jubilee Big Lunch Party! 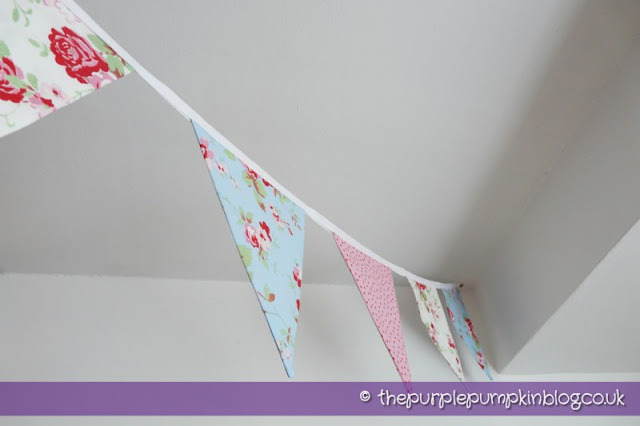 So here’s the second part to that tutorial on how to make your own fabric bunting.

Once I had sewn all my triangles together and turned them inside out, it was time to give them an iron, to get any creases out. 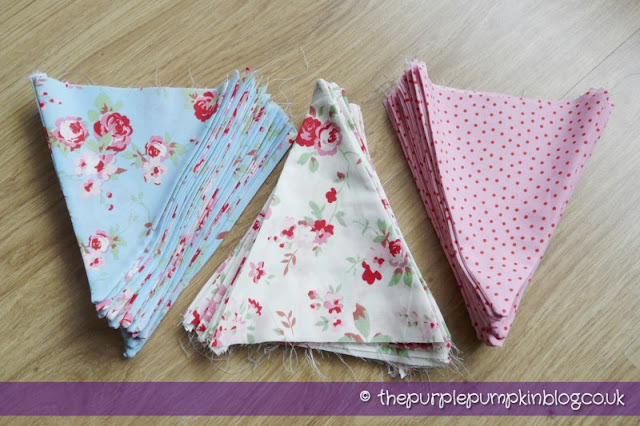 I then got out some bias tape – I think the stuff I used was an inch wide, I forgot to measure or take notice :/ 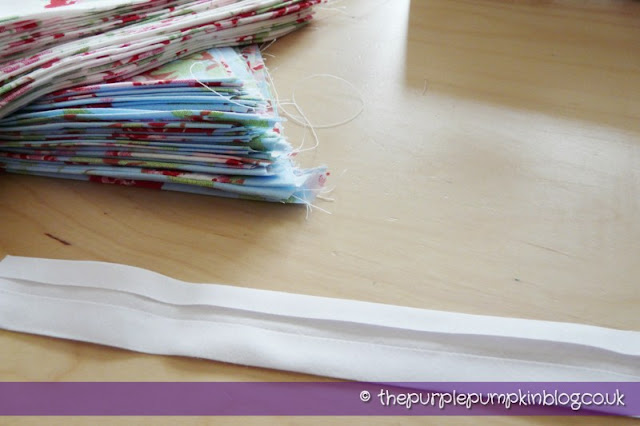 I then folded over the tape and pinned it in place, leaving a gap big enough to slot in the pennant.

With the pennant now in place, I folded over to close the tape and put another pin to secure it.

I left three inches between each pennant and continued to pin in place until the whole tape was done – leaving a bit on either end to hang with.

It was at this point I go out my sewing machine and started to sew. BIG MISTAKE. I told you that I’ve not used a sewing machine since I was in school, and pretty much winging the making of the bunting…well, I managed to snap my needle on one of the pins as I was sewing. I then couldn’t figure out how to change the needle and wanted to cry! With just a couple of days to go and all the effort of sewing my triangle pennants, I couldn’t not finish this!

So a quick call to my mother in law who is a whizz with a machine and I was taking everything to her house for some sage advice. She told me that I should tack everything first – it might take a little longer, but it would preserve my needles… *blush*

We managed to change the needle – the little pin holding it in place was secured way too tightly, and my father in law had to get out pliers to ease it round…but it was done in the end!

Working in tandem, my mother in law and I tacked all the pennants to the bias tape.

And then I began to sew. Having also shown me how to correctly thread my machine (I’d done it completely wrong and wondered why I kept messing up!), I whizzed through sewing these together in no time!

I then unpicked the tacking stitches and waited for hubby to come home from work to hang from the ceiling!

I added some paper bunting I also made and now the living room is all ready for the Diamond Jubilee!