We had a relatively late start for us today as we didn’t have breakfast booked anywhere, but lunch at Tusker House, Animal Kingdom for 1pm. We drove to the theme park and parked the car – making sure, as always to take a photo of the name of the parking lot we were located in!

We took the tram to the front gate – never worry about rushing for a tram as there will always be one following behind. 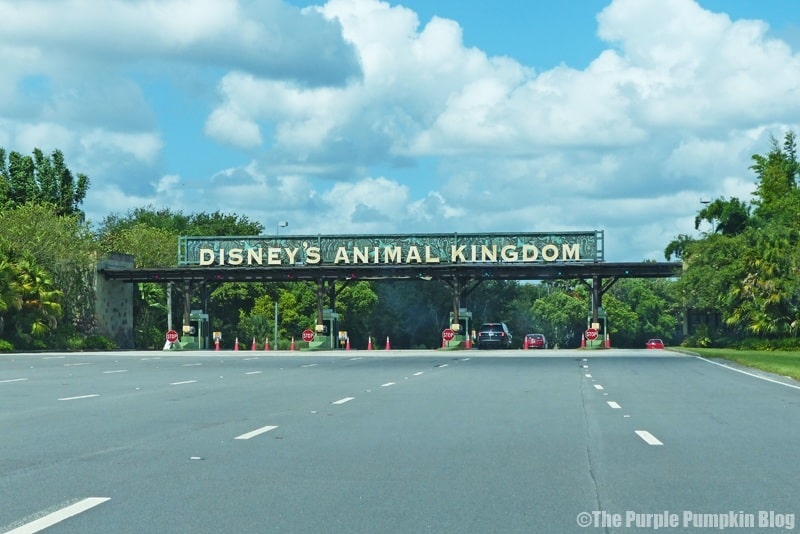 We had some photographs taken by a Disney Photographer outside the entrance – including some Magic Shots where they ask you to pose in a certain way and add characters in post-production. Always ask the photographer if there are any Magic Shots in the location you are in as they are fun to look at when you get home!

They even animate some of them which is really cool too! I love how Pascal (from Tangled) changes colour!

We had a FastPass+ for Kilminajaro Safaris, so started to walk to that attraction, stopping along the way to take a few photographs, including the Tree of Life which had hoardings around it on this visit. I was so disappointed to see them covering one of my favourite things to take photographs of! But I just stood a lot further back than I would do normally and hold my camera up a bit higher to hide them from shot!

We also had a few more Magic Shots taken – don’t think we’ve ever had so many done before! Liam is holding out his hands to catch Jiminy Cricket, we’re aghast at Stitch breaking through the ground, and watching the Mickey balloons floating above us!

We made a pit stop to the Wilderness Explorers kiosk to pick up a field guide and start collecting our badges (stickers) from around the park. It’s an interactive experience, which you can do as much or as little as you want, and you don’t even have to do them all in one trip either – we’ve got our books packed in our suitcase ready for our next visit in 2015! This follows in the footsteps of Russell and his faithful dog, Dug from the Disney~Pixar movie, Up and is great fun not just for the little ones ;)

With our guide books in hand and our FastPass+ time approaching, we went through into Africa and Harambe Village, which has had a bit of a make over since our last visit in 2013.

We joined the FastPass+ line, which wasn’t too long, and were soon boarding our safari truck for the trek around the reserve. Kilimanjaro Safaris is a must do for us as a family – we love seeing the animals in a natural habitat setting, and if you have a knowledgeable driver, the experience is even more exciting.

Our guide was a fantastic very knowledgeable about the animals on the safari. He was a great tour guide, pointing the different animals out, and we saw several animals that I don’t remember seeing on past safaris. There were some people on our truck who decided to keep standing up, despite the driver asking them to sit down – very annoying for the rest of us. Rules is rules people, stay seated!

The ride is 18 minutes long in an open-air vehicle across the 110 acre Harambe Nature Reserve. With twists, turns and bumps in the road, it takes a steady hand to take photographs, but [some] drivers do slow down to point animals out, so take that opportunity to snap away on this photo safari! The vehicle has bench seats, but no seatbelts, so hold on! You will have the opportunity to see over 34 species (depending on how well they are hiding, and the time of day!), so always be on the lookout. No two safaris are the same!

There are also two types of rhinoceros on the Haramabe Nature Reserve – White and Black… I don’t know which is which from these photos I took!

I loved that we saw a lioness on this safari – have never seen the lions before on a Kilimanjaro Safaris ride! She was just chilling on the rock… as cats do!

By the end of the safari I had to say thank you to the driver – it was the best one we had ever been on and we all thoroughly enjoyed it. I think the fact that he really took the time out to point out all the animals – no matter how well hidden made it very interesting. I love how no two safaris are the same, and can’t wait to ride it again in the future!