We walked off the ride and found a Wilderness Explorers stop and received our badge sticker :D We are such big kids! 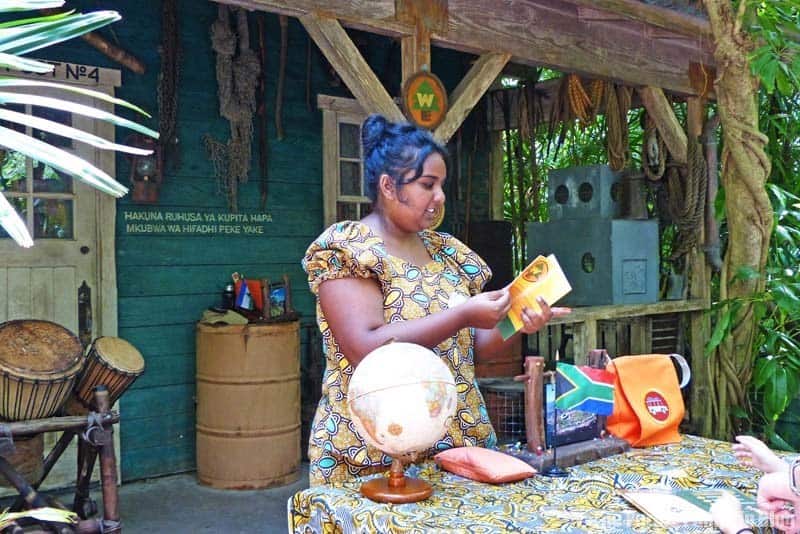 Our Advance Dining Reservation (ADR) time slot was approaching, so we walked to Tusker House to check-in. By now the sun was blazing down and it was hot, hot, HOT! Thankfully there were dispensers with ice cold water to help yourself to which was a welcome relief.

As a family we love Tusker House and have been a few times for breakfast – but never for lunch. Instead of a photo outside with Donald Duck (as we have had in the past) it was just the three of us. Donald was inside going meet and greets at the tables with the other characters which are Mickey, Daisy and Goofy. I love how the characters here are all dressed in safari gear!

We had to wait quite a while for our table, which did panic us somewhat as we had FastPass+ for Festival of the Lion King and didn’t want to miss it! We were shown to our table which was in another part of the restaurant that we haven’t been to before, which made a nice changed, and Donald and Daisy were already doing the rounds.

We waited to meet them first before going and grabbing some lunch from the all-you-care-to-eat buffet.

The food at Tusker House is African and American, and has a great selection. I like that the buffet area here is very spaced out so that it doesn’t feel crowded when there are lots of people helping themselves to food.

There was so much choice, and I even took photos of the signs describing everything so that I could retell it to you! Parts of the buffet were running low and a bit messy, which is a shame, but I do find that to be fairly common across the board at Disney buffet restaurants.

When it comes to the Deluxe Disney Dining Plan at a buffet restaurant, you are entitled to one full buffet and one non-alcoholic beverage (usually refillable) for one credit per person.

I’m going to list what was on the buffet (from the signs that I took photos of!) to give you some idea of what sort of food they serve for lunch at Tusker House…

The only problem with a buffet this varied, is deciding what to have! As usual, we try a little bit of many things!

The characters continued to do the rounds and we soon met Goofy and Mickey.

Of course, we always have to make room for dessert of which there we several choices too…

Lunch was a lot noisier than breakfast, and there was (of course!) lots of children running around. I’m sure that they make it clear that the characters will go from table to table, so don’t worry, you will meet them, but some parents and children didn’t get that memo and I saw Cast Members having to usher excited children away from characters when they were at other tables.

The service, was a bit slow – when you are after a drink refill, trying to catch the attention of someone was hard. But the food made up for the slow service, and we would go back for lunch again – maybe even dinner which I understand Tusker House offers now (but without the character dining)

We paid our bill and rushed over to watch Festival of the Lion King which we were just in time for on our FastPass+ time!