You will know that it was our 5th wedding anniversary on the 5th August, and to celebrate, hubs and I went into London over the weekend. We went for afternoon tea at The Park Lane Hotel on Saturday which was such a lovely treat. On Sunday we were on a River Thames cruise and then a wander around the Tower of London. It was fun to play tourist in my hometown, and I’m always amazed by the sights, despite seeing them so many times in my life!

I’m going to share with you today about our afternoon tea. It’s the first time either of us have done a ‘proper’ afternoon tea in a hotel, and we’ve got the bug to go to other venues now! So any recommendations are welcomed :)

Afternoon tea is recognised around the world as being something traditionally British. Nobody knows the exact origins of afternoon tea but one lady features in all theories, Anna, Seventh Duchess of Bedford (1783-1857), lady in waiting to her majesty Queen Victoria.

It evolved as a mini meal to stem the hunger and anticipation of an evening meal at 8pm. Afternoon Tea is a meal composed of sandwiches (usually cut delicately into ‘fingers’), scones with clotted cream and jam, sweet pastries and cakes. Interestingly, scones were not a common feature of early Afternoon Tea and were only introduced in the twentieth century. 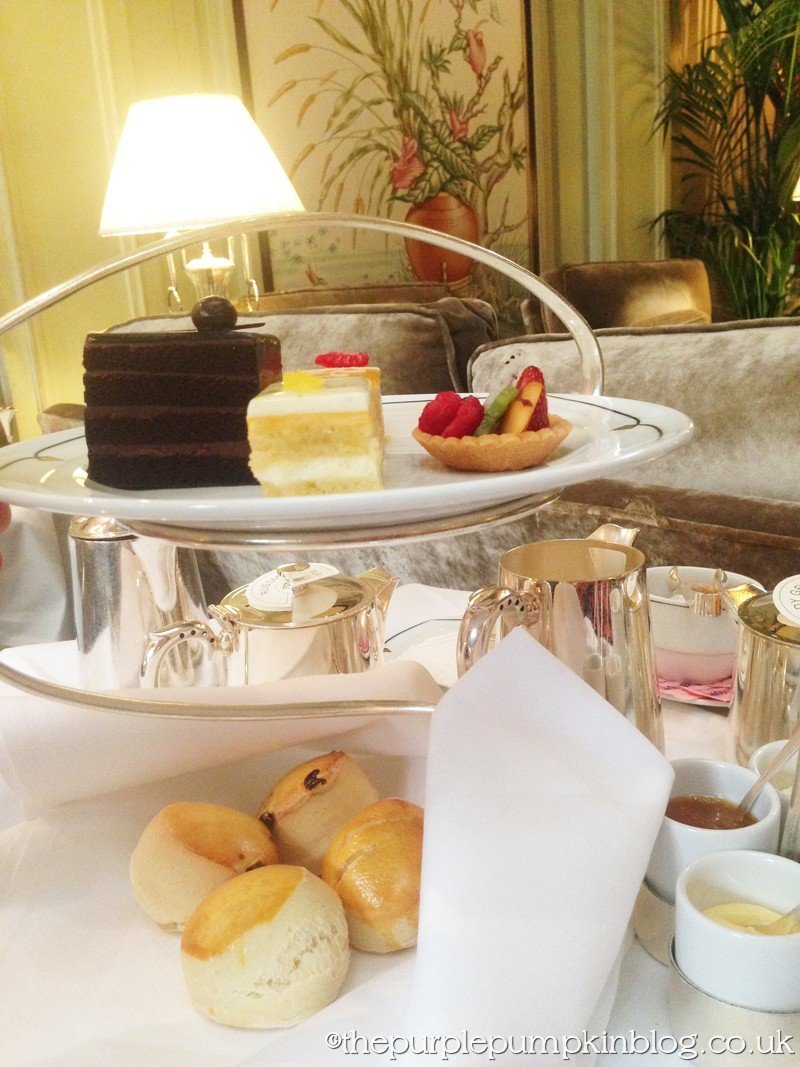 Afternoon Tea at The Park Lane Hotel, held in The Palm Court (and member of the UK Tea Guild of Afternoon Tea, a prestigious group of only the best afternoon teas in London) costs £33 per person and includes your choice of tea, a selection of finger sandwiches, scones with clotted cream and preserves, and a variety of fine French pastries. Add a flute of Moet et Chandon NV Champagne and the cost is £41 per person. We had actually bought this afternoon tea with a Red Letter Day experience, so didn’t pay the full price ;) 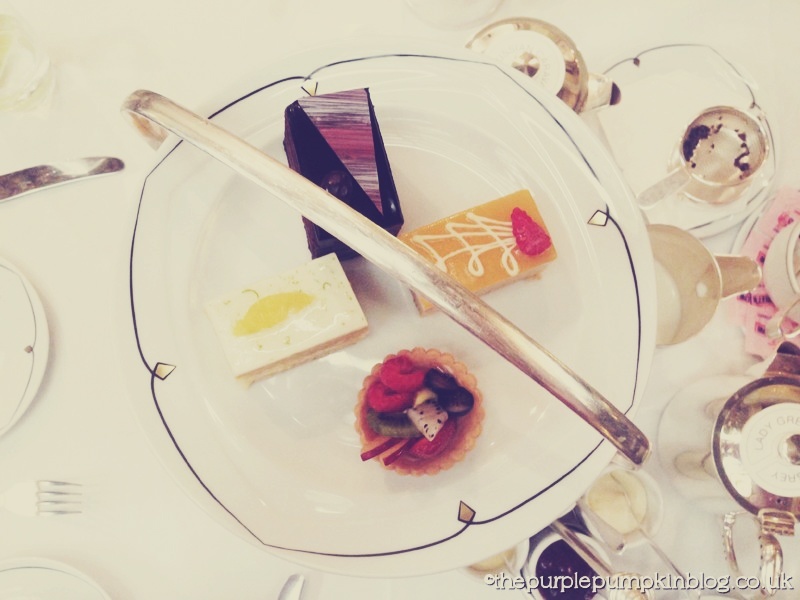 Our table for tea was booked for 1.30, so we took the tube to Green Park and walked to the hotel – we were considerably early, but they were happy for us to sit down at our table.

The hotel is art deco in style, and quite dark inside, but it felt very posh! In the area where afternoon tea was held, a beautiful bar was at one end, with low tables and sofas to sit at, as well as higher tables with chairs. We sat at a higher table and were offered some water whilst we waited – and then our champers! We guessed that they must have sittings for afternoon tea which is why we were not served immediately.

The waiter handed us a menu with a selection of teas, and there was lots of choice…

I decided on Lady Grey (a blend of oriental teas, orange and lemon peel, flavoured with a hint of Bergamot) and hubs went for Fine Ceylon (grown on the mountain slopes of Dimdula). My tea was delicious, light and citrus-y, hubs was like boring old tea bag tea, so he switched it for the Russian Caravan Tea (a fragrant blend with a nutty character) which he much preferred.  Tea leaves are used to brew the tea, and there is a handy tea strainer contraption which the waitress used to pour our initial cup, before leaving it for us to serve ourselves.

Soon, a few of the tables around us filled with guests also having afternoon tea, and our selection of sandwiches were brought out. Our waitress described them all to us, and they were listed in the menu too.

They were all very delicious, and after we finished our plate, were asked if we would like some more, which we said yes to!

The pot of tea was plenty for several cups, and we were also provided with a jug of hot water to top up; however, the servers did ask if we would like more tea, so we didn’t have to worry about running out.  We also enquired about the blend of my Lady Grey tea, and the waitress brought out some of the dried leaves to show us – how pretty does it look?!

The sandwiches were very good. We both loved how they were all so different and served on different breads too. With those polished off, scones and pastries were next. I was ever so excited to see the stacked cake stand! That for me, defines afternoon tea!

Again, everything was described, but since these must change frequently, they were not listed on the menu, so I can’t described them fully, but I’ll describe what I can remember!

The scones were small, delicate and fluffy – there were two plain and two with raisins. The accompaniments were clotted cream, a passion fruit cream (lush!) raspberry compote and an apple compote.  We always put cream first on a scone, followed by the preserves…what do you do?!

It’s amazing how much afternoon tea can fill you up – by now we were both getting full (it’s all the bread!) but we managed to squeeze the pastries in – wouldn’t want them to go to waste now, would we?!

There was a fruit tartlet with slices of nectarine, kiwi, dragon fruit, strawberry, raspberry and blueberry. It was teeny tiny! Could have done with one each!

There was a lime and coconut cake – my husband’s favourite…although, he managed to have a bite – he hates coconut with a passion! It was light and fruity and had a slice of grapefruit on the top and lime zest.

Next was a caramel and passion fruit cake, which I really didn’t like at all – hubs ate all of that one!

We were offered more tea, but we declined, we really couldn’t fit any more in! After a couple of silly selfies, we walked it off in Green Park across the road and just chilled out in sunshine. Considering the busy road just outside the park, it was surprisingly calm and tranquil and it was lovely to have a relaxing time just the two of us.

Afternoon Tea at The Park Lane Hotel, London was wonderful with a fab selection of sandwiches and pastries, and the variety of teas meant that picking one was difficult! For the Art Deco Afternoon Tea (with champagne) as we had, is £41 per person, and definitely one for a special occassion! Well worth checking out discount sites for special deals. As I said at the top of this post, we’ve got the afternoon tea bug now and can’t wait to try out somewhere different very soon!