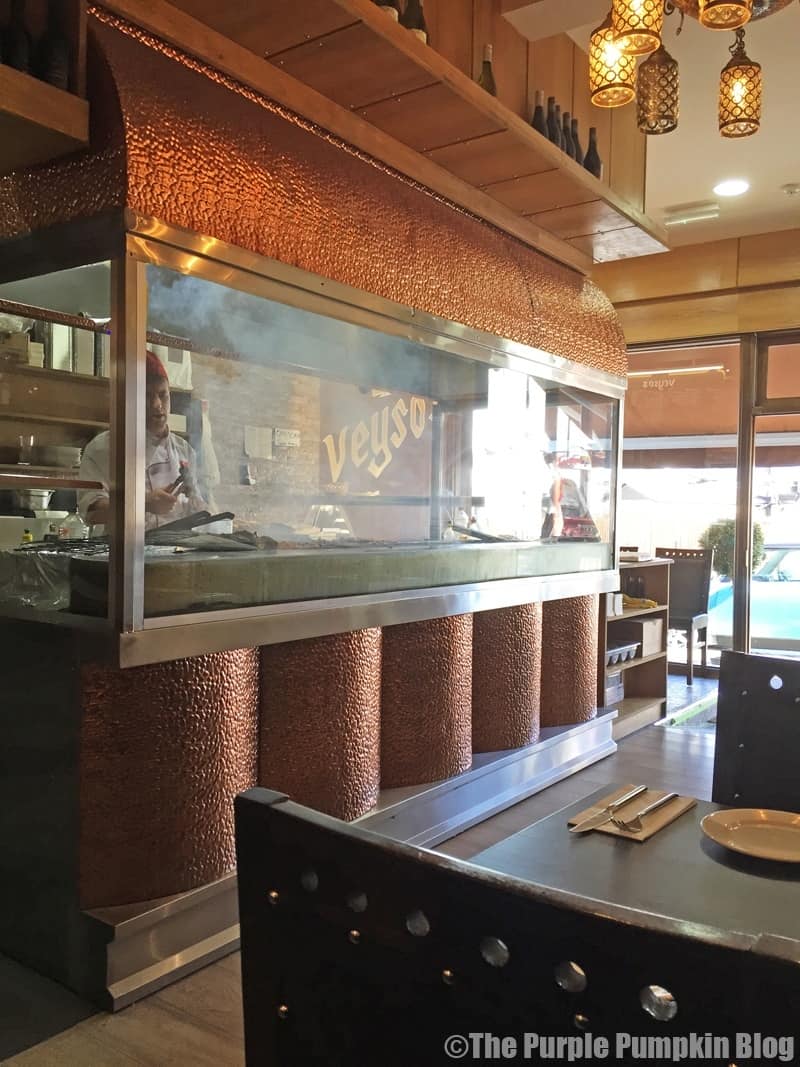 For my 39th birthday, my husband and son took me out for lunch. I really fancied a meze, and a new Turkish restaurant had opened up locally – Veyso’s Meze BBQ Restaurant in Collier Row, so it was the restaurant of choice! Whilst there are some similarities in Turkish and Greek food, there are also differences, one being that there isn’t any pork on the menu at a Turkish meze place, and some of the dishes, whilst they have the same names, actually taste different. I found the way the food is served is also different between the two – a Greek meze has several courses, where as the meze at this Turkish restaurant had two. But that’s all by the by, because we came away having had a very nice dining experience, and had some very delicious food too.

Parking in Collier Row can be a bit of a nightmare, but we found a spot on the road just outside the restaurant – handy as it was raining! The restaurant was very quiet (2pm on a Monday afternoon) with just one other table in there. The server was very friendly, and presented us with a menu. Unfortunately, I couldn’t see where to order a meze… turns out they don’t serve that until after 4pm. Veyso’s doesn’t have a website, so we couldn’t find this info out in advance. I explained that it was my birthday, and how we had come especially for a meze, and he said it would be okay for us to order it.

It was at this point, while looking at the menu that I realised that a Turkish meze is very different to a Greek meze. We decided to have the Family Special (for 4 people), which costs £57.50 and includes a start of cold mixed meze, with a platter of various barbecued meats, served with rice and salad, as the main course In addition, we also ordered a portion of grilled halloumi cheese, and Liam wanted to try Karidas Tava – seasoned king prawns, pan fried, with onions, peppers and vine tomatoes, so we ordered those for him, along with a portion of fries to go with his main course.

But before all that, we were brought a couple of dips – a garlic dip, a chilli dip, some olives and some flat bread, as well as our ordered drinks. The flat bread was warm and delicious, and the garlic dip helped to cool down the hot chilli dip. The olives were really tasty too.

Our cold mixed platter was then brought out, which was a very pretty plate filled with:

Between the three of us, we tucked into all of the delicious dips and other dishes on the starter platter. We were offered more bread when our basket was empty, which was very nice to see – nothing worse than running out of bread before dip!

Up next was a platter of barbecued meats which included:

and was served on a bed of rice and bulgar wheat, with a Shepherd’s Salad – tomato, cucumber, pepper, red cabbage, carrot, onions, and rocket, with a lemon and olive oil dressing.

Remember that this is for four people… the platter was HUGE! We did not finish this – but, the restaurant did pack up our leftovers for us to take home, which was great.

The meat was tender, full of flavour from the herbs and spices, and you could really taste the smoke from the charcoal grill, which added another layer of deliciousness!

I decided to stay traditional with some baklava. Part of me was disappointed it wasn’t homemade, but it was nice baklava, although, I don’t think there was the need for the cream. My husband had the non-traditional apple pie, with vanilla ice cream, which he said was delicious; and my son had a chocolate ice cream, which he had no problem finishing off!

Steve finished with a Turkish coffee too, which is very strong, and very similar (if not the same as) Greek coffee – served in a small cup, and being left with the coffee residue at the bottom of it. It came served with a little piece of Turkish delight.

We were also given some more Turkish Delight with our bill, and it was a very yummy pistachio flavour, which pleased me as I’m not a fan of the traditional rose flavoured delight. We paid our bill, left a tip, and said we would be back in the future, as the food and the service had been fantastic. I would love to go back in the evening, when the restaurant is busier, and no doubt a lot livelier ambience too.

I’ll close out with some photos of the restaurant, and please tell me I’m not imagining that the wall sculpture of the lady looks like Beyonce?!