This is the second of two dishes I made for my Moroccan Barbecue a couple of weeks ago – Vegetable and Chickpea Tagine. A tagine is a north African stew type dish, made in an earthenware pot called a tagine after which the dish is named. I cook this dish a lot – I just make it up as I go, depending on what I have got in the cupboards/fridge! 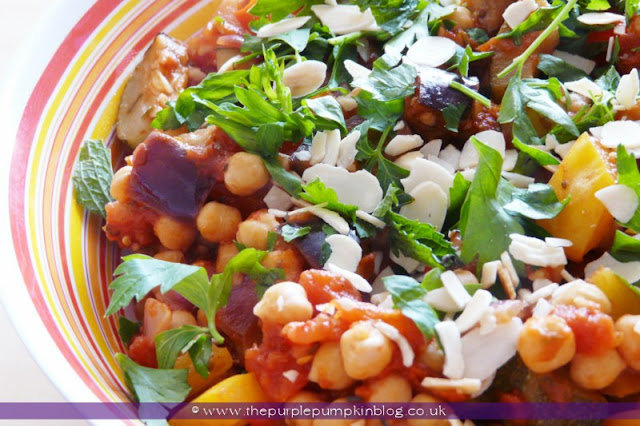 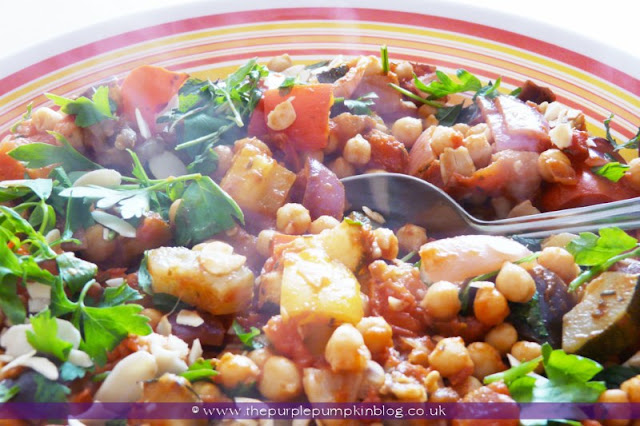 Since I was making Moroccan spiced lamb burgers, I kept the flavours on this type of vibe and this is what you will need to make my tagine.

This quantity served six of us, with leftovers. I give rough measurements, since that’s the way I tend to cook…it all depends on the veggie size really! 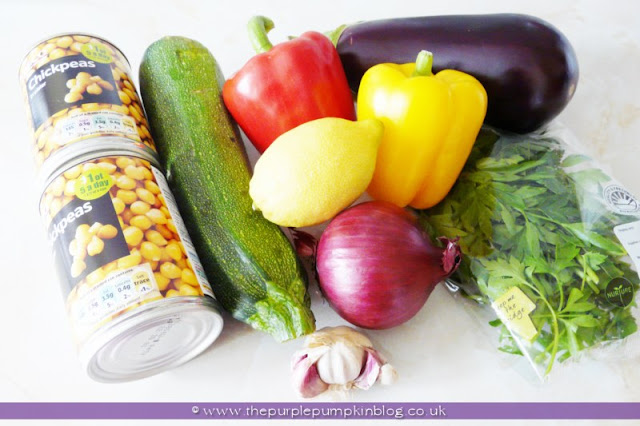 Since I don’t have a tagine, I cooked this dish in an ovenproof dish…place all the chopped vegetables (aubergine, peppers, onion and courgette) into your cooking dish and drizzle with olive oil or spray with one-cal oil spray (your choice!). Give everything a good mix with your hands so that all the veggies are coated with oil.

Sprinkle over the crushed garlic, cinnamon, cumin and mint. Add a pinch of salt (I often don’t bother). Mix everything again to combine.

Open your canned tomatoes and pour those over, combine again.

Toss in the drained chickpeas, and guess what? Mix up again – I always use my hands.

Place in a hot oven, about 200C for 30-40 minutes until the vegetables are cooked and slightly charred. I often stir half way through cooking.

To serve, stir through a handful of sultanas (optional), sprinkle over the chopped fresh coriander (or you could use flat leaf parsley) and flaked almonds.

A great side dish for barbecued meats, seen below with chicken drumsticks! Or as a meal in itself (which is how we often eat this to take a break from eating meat!)