Tiramisu – With A Twist!

Home » COOK » Recipes » Tiramisu – With A Twist!
Jump to Recipe

It has been ages since I shared a recipe on my blog, so what sweeter way to come back than this Tiramisu – with a twist! Tiramisu is a classic Italian dessert, made with ladyfingers that have been soaked in coffee, layered between a creamy filling, often containing Marsala wine, and topped off with a generous dusting of cocoa powder.

My recipe is a delicious twist on the original and is perfect for dinner parties as it is made in individual portions. 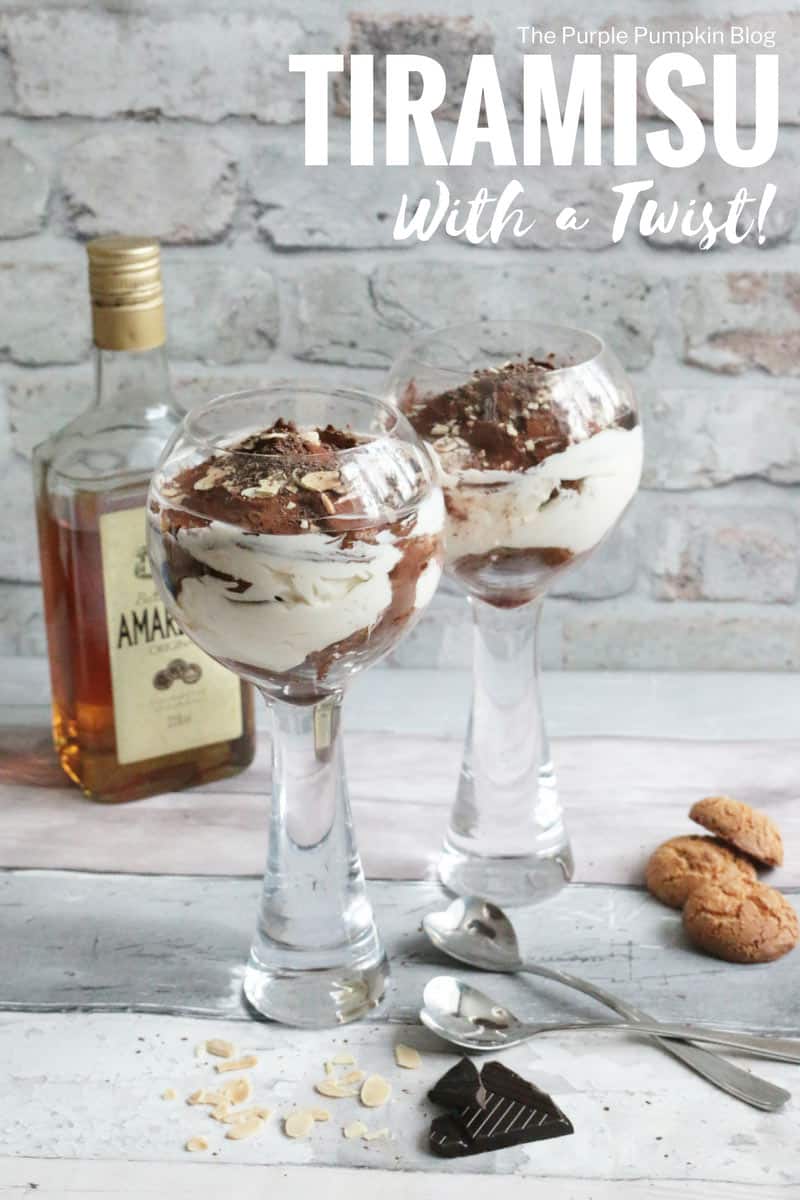 How To Make Tiramisu

Traditionally, the creamy filling of a tiramisu is made using a whipped mixture of eggs, sugar, and mascarpone cheese (an Italian cream cheese). This isn’t good if you can’t/don’t eat eggs, or if you need to avoid eating raw eggs. It is often also flavoured with Marsala, which is a sweet wine from Sicily. The filing is layered with espresso-soaked sponge fingers in a glass dish so that you can see the delicious layers and topped with cocoa powder. 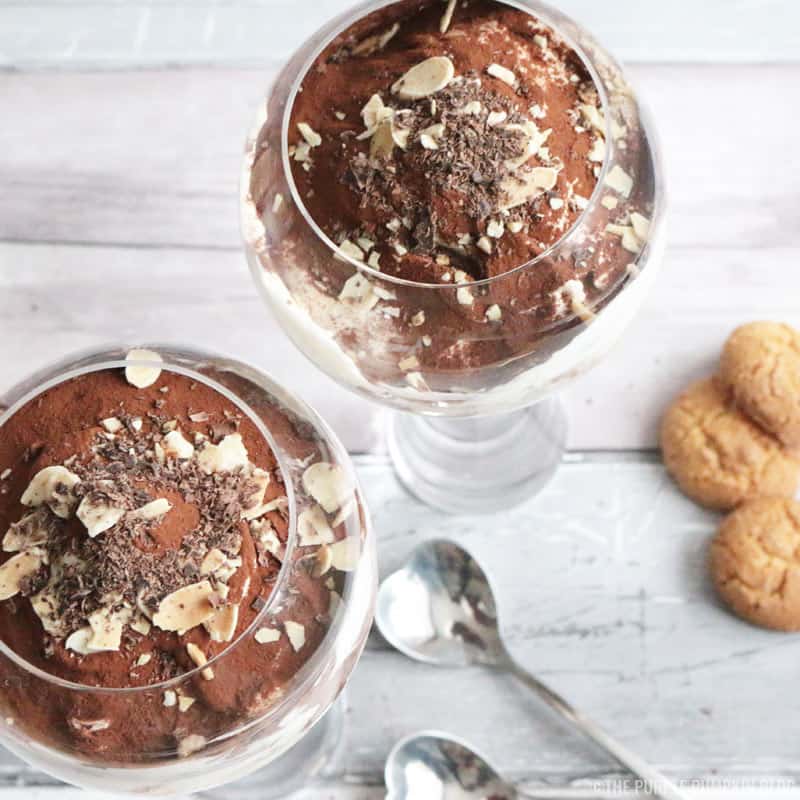 I’ll let you in on a secret – I’ve never made tiramisu before. I’ve eaten it plenty of times, but never actually prepared one myself. I know roughly how it’s made, but thought I’d best find a recipe online, I found the BBC Good Food’s ‘Best Ever Tiramisu’ recipe, so that had to be the starting point right? I found several others too, but the BBC recipe was the easiest, and made it very easy for me to add my own twist! 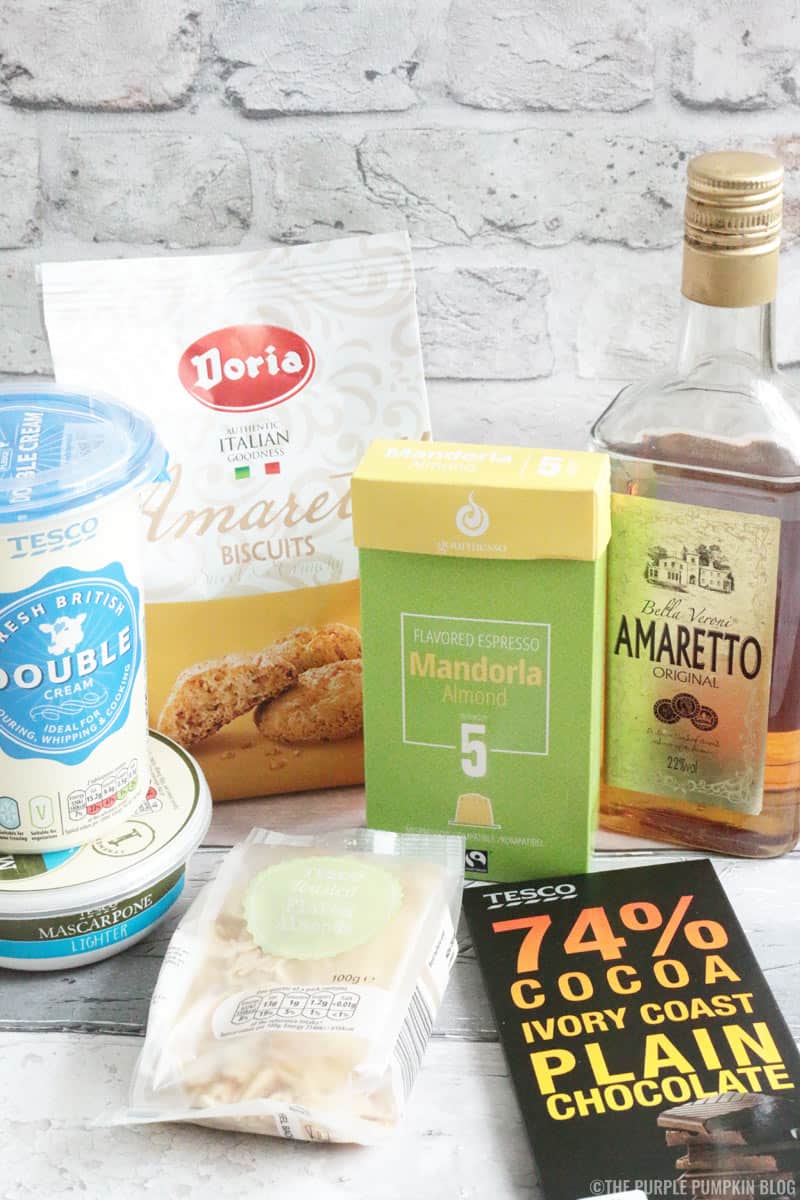 Tiramisu with a twist!

So, what is the twist in my recipe? If you look at the photo of the ingredients above, you can see it has several changes:

Can you tell that I love the flavour of almonds? Check out my almond biscotti recipe for another Italian sweet treat.

I made two portions of tiramisu – for hubby and myself – but you can easily double, triple, (and more!) this recipe if you need to.

The first thing to do is soak the Amaretti biscuits in espresso. The compatible coffee capsules from Gourmesso fit nicely into our Nespresso machine, and the almond flavour espresso is perfect in this recipe! The coffee is poured over the biscuits and left to be soaked up. It’s worth turning the Amaretti at least once.

Then it’s time to whip the mascarpone and double cream together. This part was done very much to taste – I added about a dessertspoonful of sweetener and a good splash of Amaretto. Once it reaches a nice thick consistency (be careful not to over whip) I stirred in a handful of toasted flaked almonds which I crushed in my hand as I added them.

That’s the two components ready, now to build up the layers! I placed four Amaretti in the bottom of each glass, followed by about half of the creamy mixture split between each two. I grated some dark chocolate on top of this cream layer, along with a sprinkling of cocoa powder. 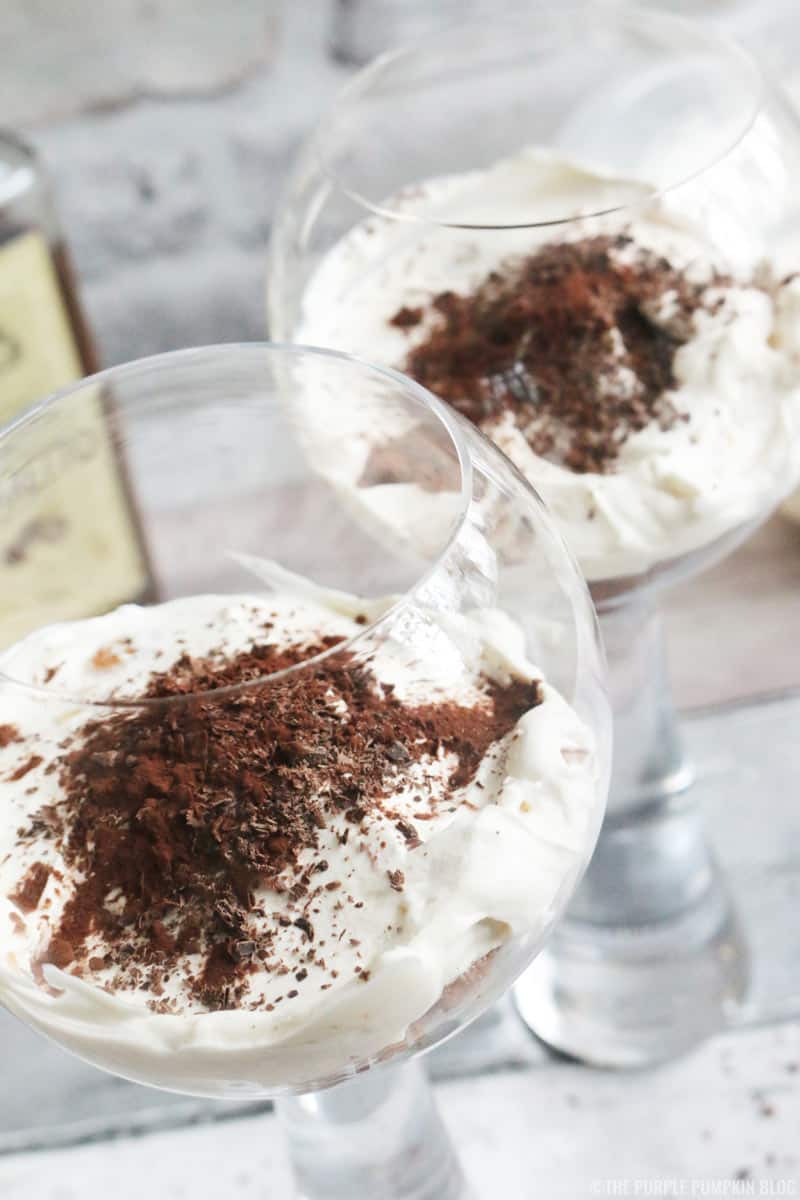 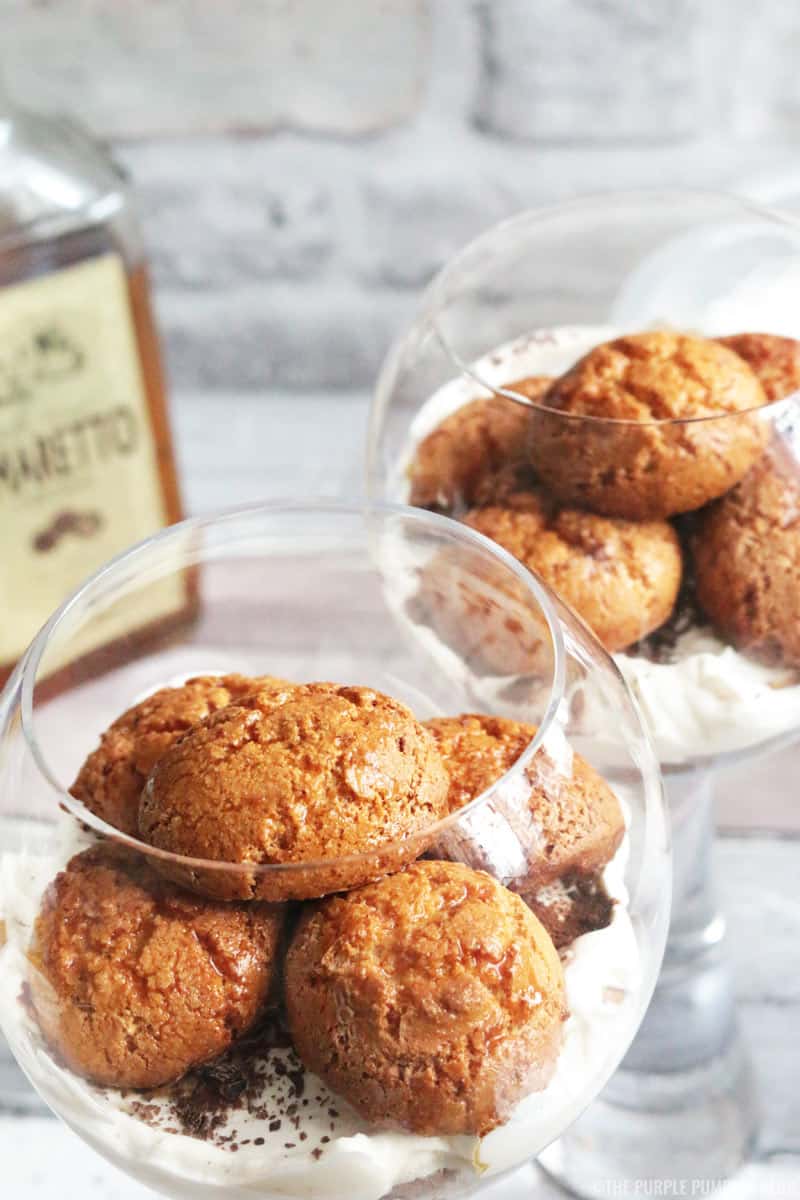 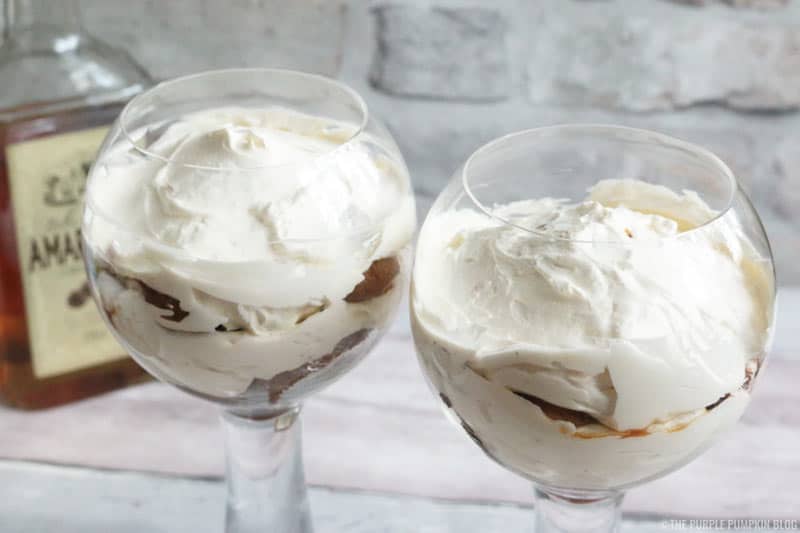 I smoothed the top layer as best as I could and then sprinkled over a generous dusting of cocoa powder – don’t panic about the amount, it really helps to cut through the sweetness of the rest of the dessert. For extra decadence, I added some more grated chocolate and almonds. 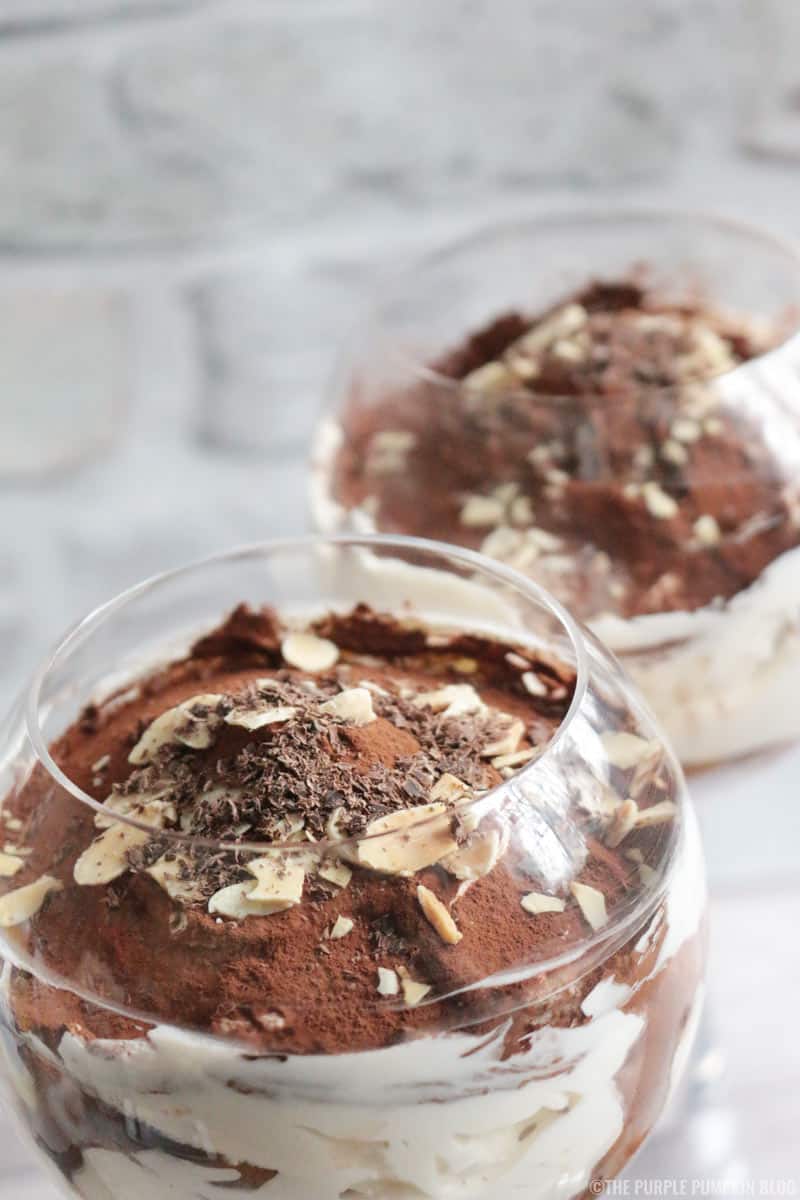 How easy was that? Although, if you want an even easier coffee recipe, here’s how you can make affogato.

My tiramisu – with a twist – can be kept for a couple of days in the fridge too, making it a great dinner party dessert to help you get ahead of yourself.  (Make sure you are mindful of the use-by dates on the cream and mascarpone though!) You could also make this without the alcohol if you have non-drinkers at your party. In that instance I would add some cooled espresso to the cream while whipping for added flavour.

You can serve immediately, but it’s even better when served chilled. Upon diving into this dessert, both my husband and I agreed that it was a good balance between the bitter cocoa powder on top, as well as the slightly bitter coffee, and the sweetness from the Amaretti biscuits and the cream.

I know I’m biased as it is my own recipe, but this is one seriously lush dessert! Try it – you will NOT be disappointed! 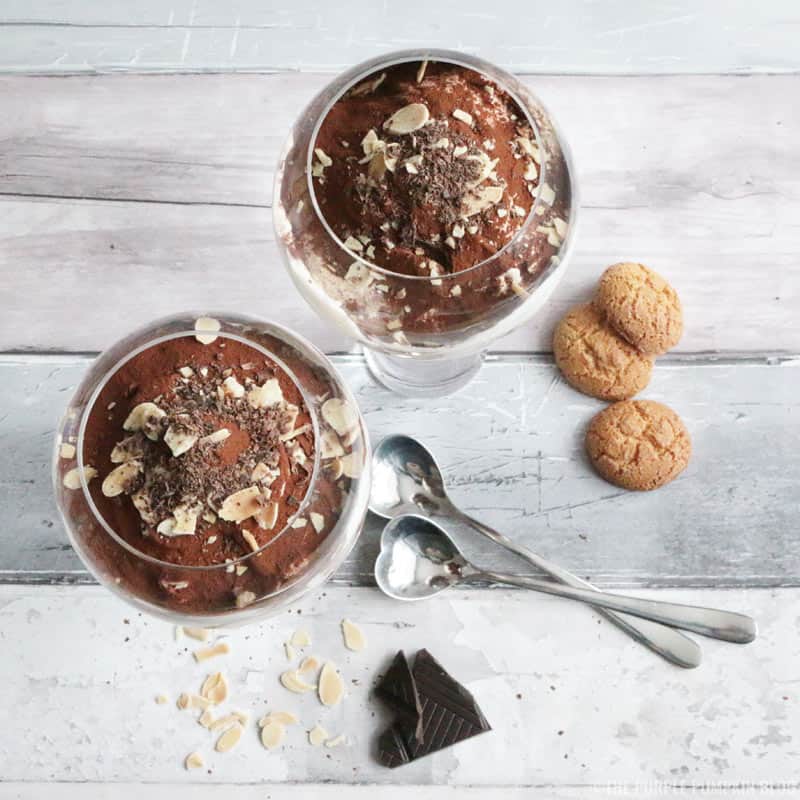 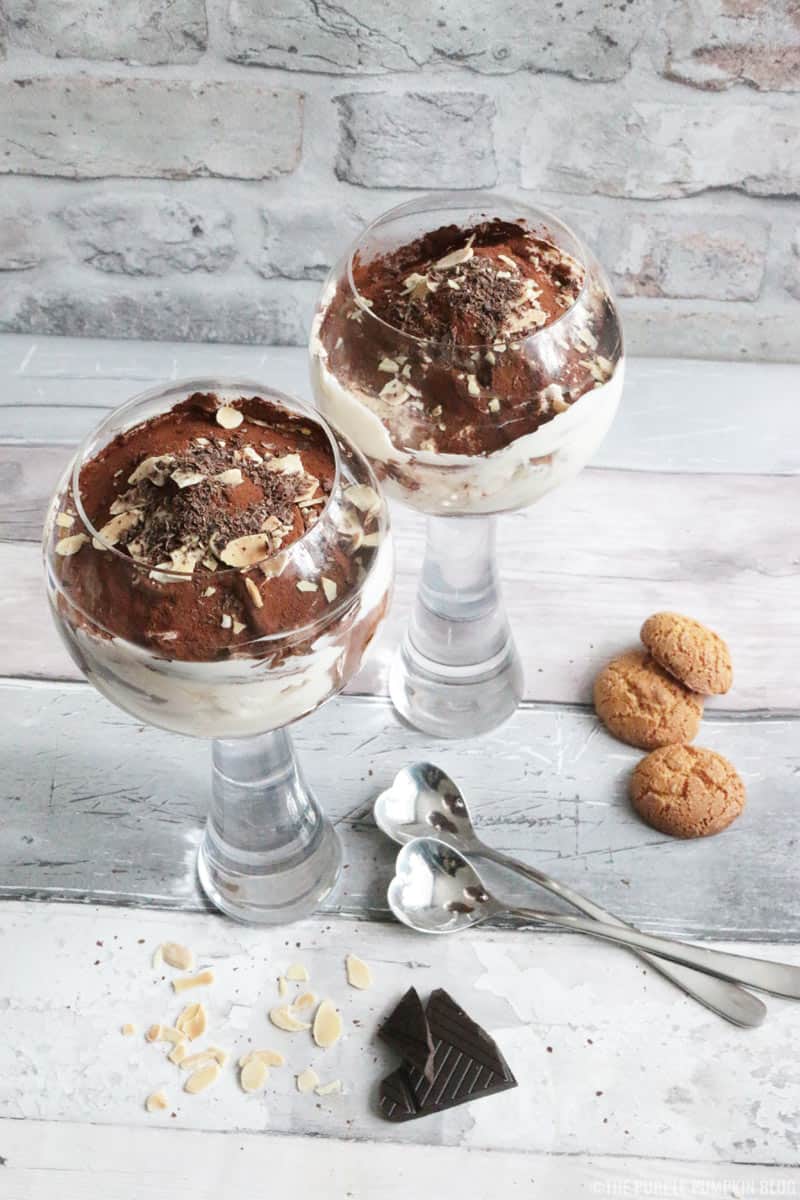 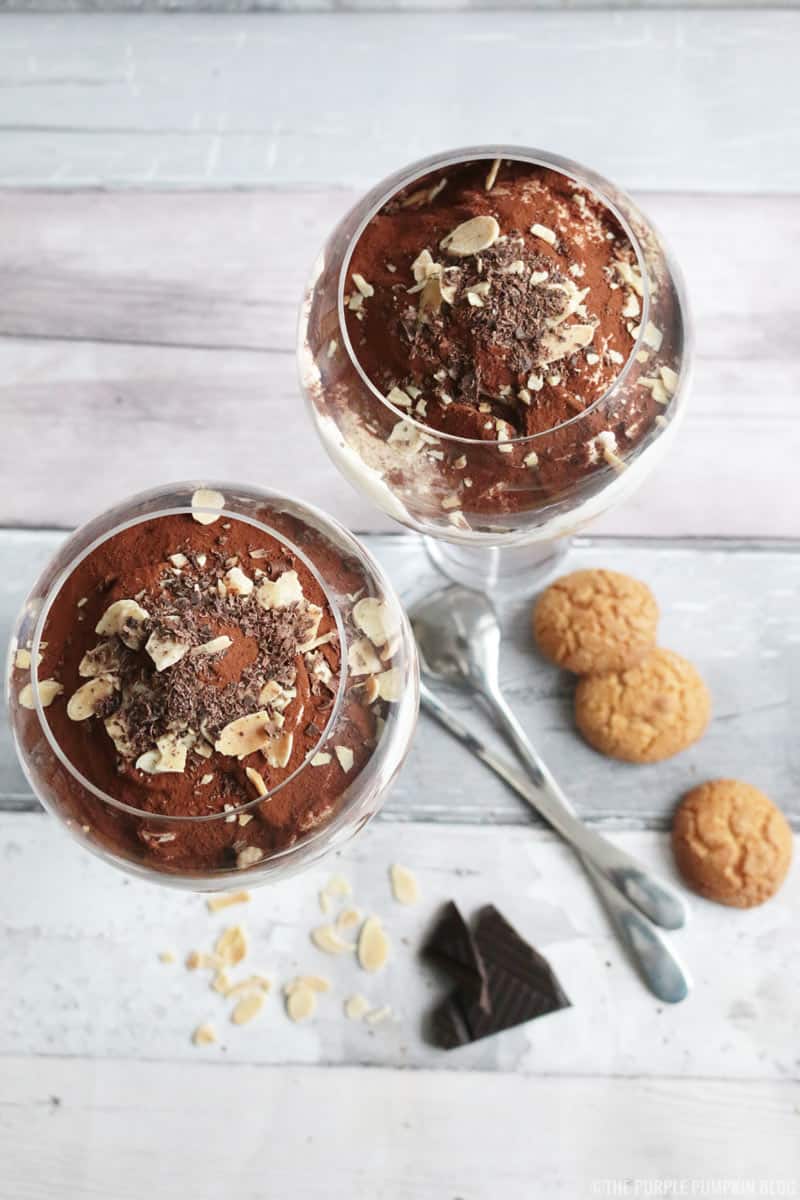 Please feel free to share my recipe for Tiramisu with a Twist by using the social buttons at the bottom of this post! Don’t forget that you can join The Pumpkin Patch for member exclusive freebies, offers, and more; and follow The Purple Pumpkin Blog posts on Feedly or on Bloglovin’ so that you don’t miss out!