Saturday 4th August was dubbed ‘Super Saturday’ for the London 2012 Olympics. It was super for Team GB in that we won 6 gold medals! It was also super for my husband and myself, as we had managed to get tickets [the night before] for women’s hockey, and would get to see the Olympic Park! 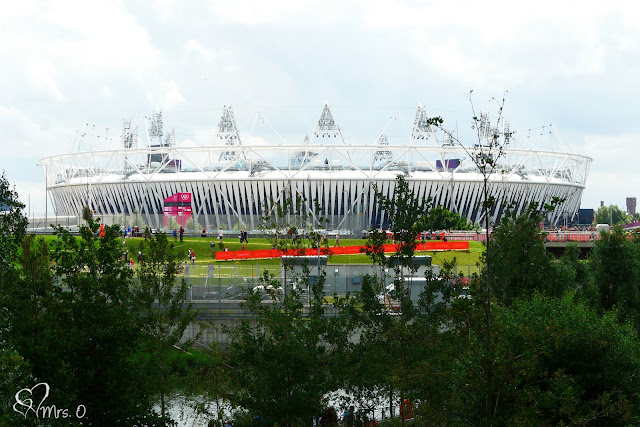 We did try to buy tickets for the athletics that evening, but the only tickets left were £450 each…and sadly, we just didn’t have that spare [nearly] £1000! A shame, as the atmosphere must have been electric in the stadium that evening with Team GB winning 3 gold medals in under an hour…Jess Ennis in the Heptathlon, Greg Rutherford in the Long Jump and Mo Farah in the 10,000 metres. I’ve never shouted and screamed so much at a televised sporting event!!

As we had bought our tickets the night before the following morning’s event, we had to get up to Stratford to pick up our tickets at 7:00am – the hockey started at 8:30am…it meant having to wake up at 4:00am!!! Wow, that was some hard doing, especially as had a fairly late night – staying up to try and buy tickets!! But with alarm clocks set, we managed to drag ourselves out of bed and get ready. I posted this picture of myself up on Facebook with the tag “Too Much?!” I had put two Union Jack flags in my hair, and it really tickled my funny bone and I couldn’t stop laughing at myself :D I travelled all the way to the Olympic Park with the flags in my hair and wore them in my hair for most of the day! (The next few photos are early morning iPhone pics!) 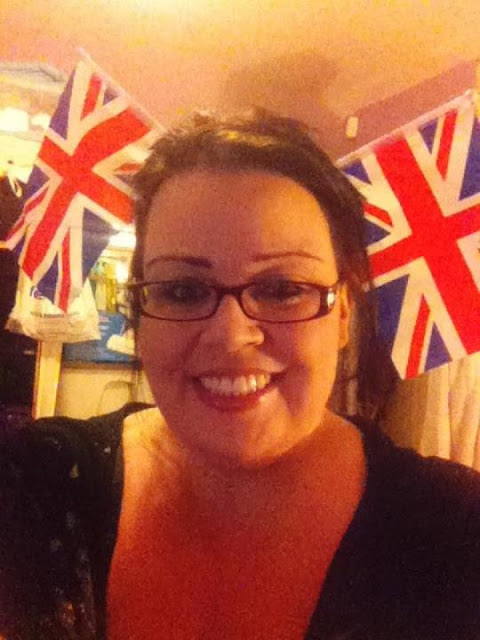 So, by 4:50am we were out of the door to catch the very first bus to the train station. It was pouring down with rain and we both hoped that that wasn’t a sign of the weather to come :( Whilst waiting at the station we saw several volunteers and was chatting to them whilst we waited for the train. It really set us up for the excitement of the day :)

It doesn’t take us too long to get to Stratford by train, and we were there by about 6:30 ish. I’ve been to Stratford Station so many times in my life; I’ve seen the stadiums and arenas being built over the years; I’ve seen these signs up for a while now, but the excitement I felt seeing them, and knowing that they were directing us to the Olympic park was unreal. I’d had the hump with the Olympics because we failed on many occasions to get tickets (I’m sure the system is flawed!) and was refusing to have anything to do with going to see it…but once it was here, it was a different story, and I’m so, so pleased we had the opportunity to go and see an event.

We grabbed a Starbucks in Westfield to wake us up, and then started the walk towards the box office to pick up our tickets. As part of the price you also get a Travelcard. We had to pay to get to the park, but was able to use these for our return journey :)

With tickets firmly in hand, we then made our way towards the entrance. It was like a holding area that eventually was opened and you go through airport style security putting your belongings through the x-ray machines and walking through the bleeper thingy…hubby got stopped…as he always seems to! But after a quick pat down, we were good to go :)

After security you come to this huge building with the Olympic Rings on the side…and by now, the sun was out and shining brightly :)

Walking through the gates (you can see the Olympic Stadium in the background!) and into the Olympic Park!

You walk past the Aquatic Centre (The Wave). You can just see it here, the structure waving out over the stadium. You see the whole building properly as you walk more into the Olympic Park.

You are greeted by the magnificent sight of the Olympic Stadium, which is HUGE!

To the left of the stadium is a tall structure called The Orbit. You can pay to go up it, and it has views of 25 miles over London – cool!

The hockey is played at the Riverbank Arena which is at the far end of the park (from the Stratford Gate), so we started to walk in that direction, taking in all the sights along the way :)

Signposts helped us find our way around

Helping people to get around the park

And the band begins to play

The Big Screen at Park Live where you can sit and watch the day’s events.

Our first sight of the Riverbank Arena

The Riverbank Arena is one structure that is temporary and will come down when the Olympics is over.

We queued up to grab some breakfast and then took our seats in the arena…which were just awesome! After gripes about empty seats at events, I think that those in charge of ticketing must be making sure that they sell as many as possible, and we were sat in press seats :) A great view for £45! But to be honest looking at the whole arena, there isn’t a bad view anywhere.

We watched as the first two teams – Australia and South Africa warmed up. Then waited for the match to start. The arena was a little empty to start with, which was disappointing to see as we struggled so much to get tickets for any event, but it did eventually fill out.

This player received an honour for her 100th cap

So weird to watch the film crews knowing we were watching it for real!

It was also weird to watch a match without commentary! I don’t really know the rules of the game, but before the match there was a quick explanation which helped :)

Masked up for a penalty

Team GB were playing in the afternoon

Despite a sunny morning so far, the skies came over dark and it started to rain…but we were smart and had brought a poncho and an umbrella, so we stayed dry whilst the rain was overhead. It eventually moved away and the glorious sun came out to shine again :)

But it wasn’t to be, the final score was Australia 1 – 0 South Africa

A 45 minute break followed the first match, and the arena emptied out somewhat as people left to grab snacks. The crowd, on returning seemed to change – gone were the yellow and green Aussie supporters, and in came a wave of orange shirts to support Holland. Perhaps the ticketing for events is done per match rather than per session in other countries? A couple of Dutch supporters sat next to us, and that was handy, as one of them was also a hockey player who explained things to me :)

Another warm-up period for the next two teams – Korea and The Netherlands.

Just in case we forget O_O

A penalty shot for Korea…

and they score! Korea 1 – 0 Netherlands

Lots of subs going on through the match

And The Netherlands score to make it 1-1

This match was a lot more exciting and fun to watch than the first match – more goals, and a faster pace.

With our session of hockey over, it was time to vacate the arena. Just being there, seeing an event live really made us want to see something else. We hoped we might be able to get tickets for that evening, and searched online (the only way you can buy tickets) via our phones. But no luck :( So instead, we started a walk around the whole Olympic Park to take everything in :)

Basketball Arena – we’ve tried so hard to get tickets!

Lots of places to grab a bite to eat

The giant Olympic Rings from the other side

A pair of Aussie atheletes

They were interviewing the USA Badminton Players

Amongst all that steel and structure, there was a lovely park area…

Everywhere you turned you would see people covered with their country’s flag…it was a wonderful thing to see :)

We took a wander round [one of] The London 2012 Shops, where we bought a couple of souvenirs and I got to pose with the mascot – Wenlock :)

By the time we came out of our event, the park was absolutely heaving!

The Velodrome and Basketball Arena

McDonald’s are one of the sponsors (anyone else find that a bit weird, because, y’know, junk food?!)

Soooo many people! We decided to get a bus instead :)

Not far from home now, but you can’t escape the Olympics!

My husband and I had such a wonderful day at the Olympics, and so glad to have been part of such a momentous sporting event. We have been lucky enough to also get tickets to watch athletics at the Paralympics in September, and this time my son gets the chance to come as well. I can’t wait to get inside that Olympic Stadium and see it first hand – I bet it’s going to be A-MAZ-ING!