Pink Flavoured Baby Shower – Bringing It All Together 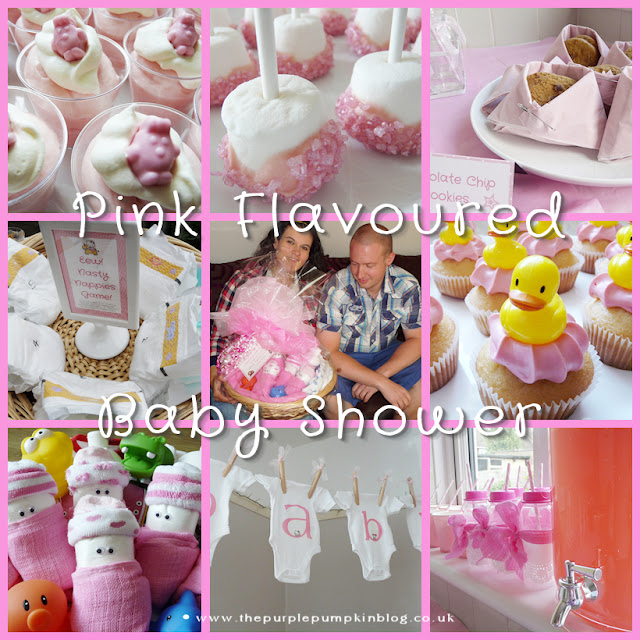 If you’ve been reading The Purple Pumpkin Blog recently, you’ll know I’ve been sharing all the details about the Pink Flavoured Baby Shower I hosted for my sister and brother-in-law who are expecting their first baby (a girl!) in October.

This was new territory for me, party planning wise as we’ve not had a baby in the family for a looong time – well, since me in fact with my son 13 years ago! And back then, baby showers were not heard of in the UK!

It started with the invitation…which set the style of all the printables for the party….Since we knew the gender of the baby – a girl – I went all out with a pink theme. I called the shower a ‘Pink Flavoured Baby Shower’ because you often hear (at least in the UK) people asking the parents-to-be if they are going to find out the flavour of the baby! 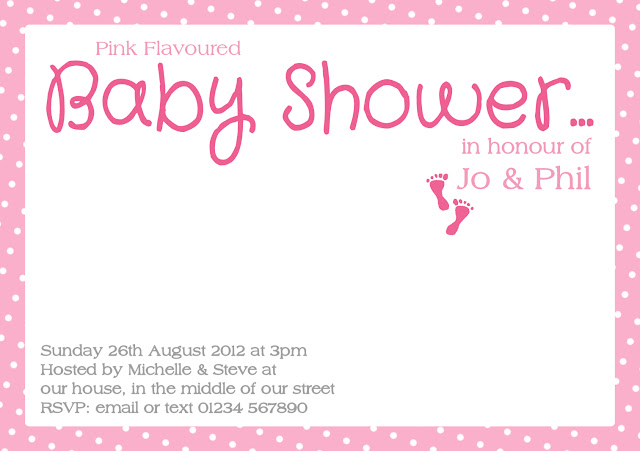 For decoration I made some pink tissue paper rosettes, a giant paper wall fan and customised some baby vests with the initials b.a.b.y which I hung on a ‘washing line’ in the living room. I’m also a big fan of table confetti, so scattered that wherever I could!

As guests started to arrived we offered Pink Flavoured Lemonade, and served that in Decorated Drinks {Baby} Bottles and pink paper cups.

We also served Strawberry Milk and Cookies. I had poured the milk into cute Mini Milk Bottles.

I started proceedings with a little game to break the ice as there were people at the party who didn’t know each other. I started out with ‘Guess the Famous Kids‘ which every one puzzled over! More games would be played later on throughout the afternoon.

Making themed desserts is so easy, and I served up quite a few at the baby shower! A lot were ‘cheats’ in that I bought ready made stuff and put a twist on it, but in any case – whether from scratch, or store bought, guests loved it all!

I had some fairy cakes in the cupboard and decorated them with some sweet duck toppers, creating Dinky Ducky Cupcakes (my sis loves rubber duckies!)

I also made some paper cones and stuffed them with cotton candy. Didn’t last very well I’m afraid!! But since I made them, they deserve a little spot!

Oops, almost forgot the ‘Ready to Pop!’ Popcorn Cups I laid out!

I folded some paper napkins to make Nappy Napkin Snack Holders, and in those I put some Snickety-Snacks and cookies.

I decorated some wooden cutlery with washi tape and wrapped them up with napkins to create Cutlery & Napkin Bundles. I enjoyed keeping the design theme running through all the elements.

When it came to the savoury food, I went in an Asian inspired direction, making a big bowl of Nutty Noodle Salad that I served with Chicken Teriyaki and store bought prawn crackers. All went down really well!

With everyone fed and watered, it was time for more games! First up it was time to ‘Guess the Date/Weight‘ of the baby. Then we all filled out ‘Wishes for Baby‘. I created all the printables for the games, and it really made me proud when my brother-in-law’s family asked me where I had bought them from! Gave me a real confidence boost :)

With lunch truly settled in people’s stomachs, it was time to play a couple of the more yucky games in the form of ‘Guess the Baby Food‘ and ‘Eew, Nasty Nappies!‘

Both were hilarious, and I was amazed at how much everyone enjoyed them…I wasn’t sure how well they would go down! Well worth doing as they really gave everyone a giggle!

The final game was ‘Make A Baby‘ where we all made models of babies using Play-Doh. Another fun little game.

With the games all finished with, it was gift time – after all, that’s what a baby shower is for – to shower the baby with gifts!

I put together a gift basket for my sister and brother-in-law and baby too of course! I made some Nappy Babies which turned out a lot cuter than I was anticipating! I then placed them along with other goodies I bought into a basket and wrapped up with cellophane and ribbon.

They received some lovely presents, and I know that they were both so thankful for the gifts as well as the party that I prepared for them. It was such a lovely day and I’m so pleased that everyone enjoyed themselves :)

When the party was over, there were thank you Party Favors for people to take home. I packaged up some banana sweeties with a custom tag with the event and date, and made a sign saying “Thanks for Swinging By!“.

There were also lollipops that people could grab on their way home with a label I designed, attached saying “Ready to Pop!”

I hope you’ve enjoyed reading all about the Pink Flavoured Baby Shower that I hosted. I had so much fun designing everything and creating the food/drinks etc. It was awesome to see all everything come together so well, and for it to be a bigger success than I had dreamed of! I’ve loved sharing it with you!