We had to tear ourselves away from the lovely views to go and check in for our reservation, which we did have to wait about 20 minutes for, but that’s fine, as you can see out onto the savannah (and I’m sure the buzzer works if you pop outside as well). I nipped into the loos, which are, just like the rest of the building, gorgeous! Probably the prettiest restrooms I’ve seen! Yes, I am that person who takes the most random of photographs (but don’t worry, I was the only person in them at the time! ) 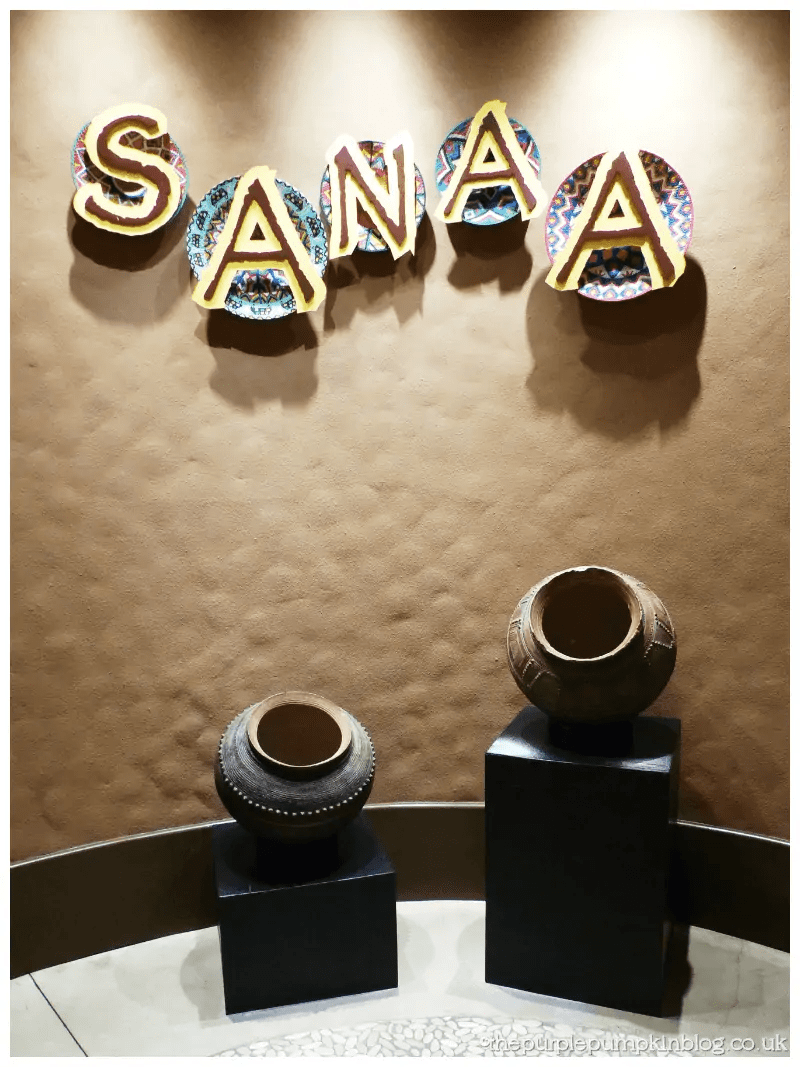 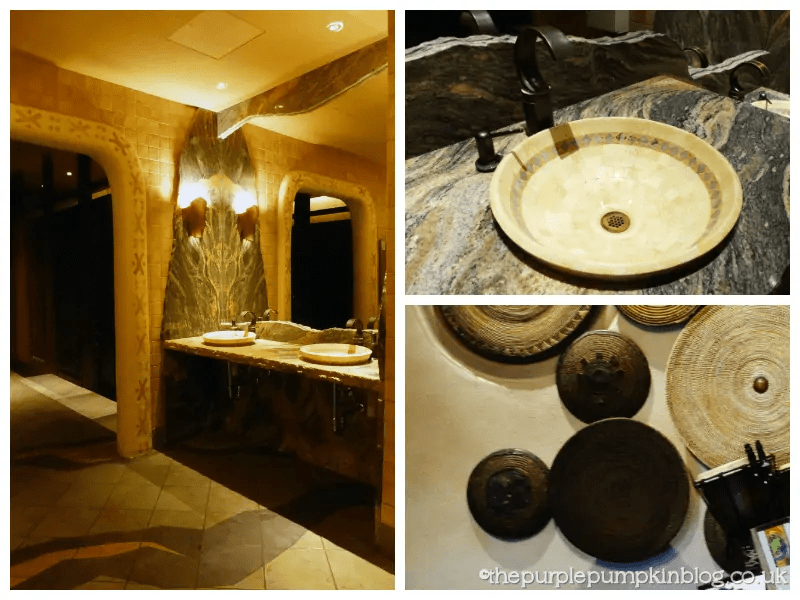 Our buzzer went off and we were led to our table. The restaurant was pretty busy, and I was a bit gutted not get a table by the window, but there was no where to be moved to, even if we had asked! There was even more beautiful light fixtures – I LOVE this lamp shade and want it! 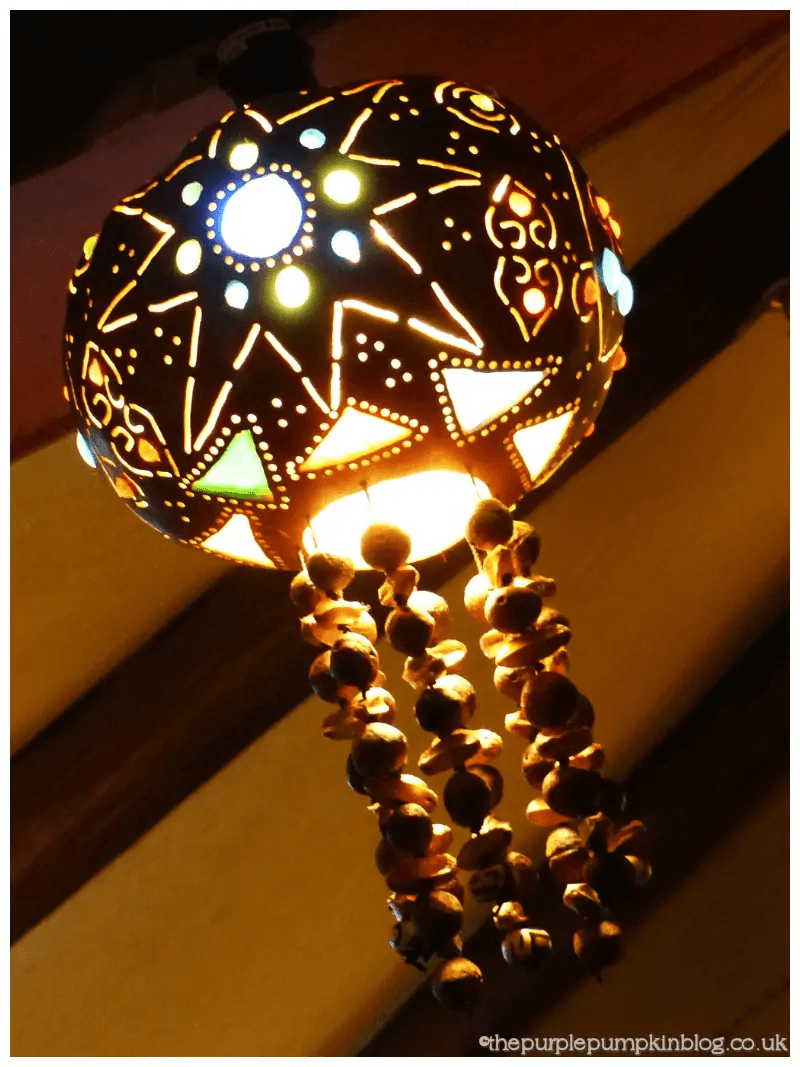 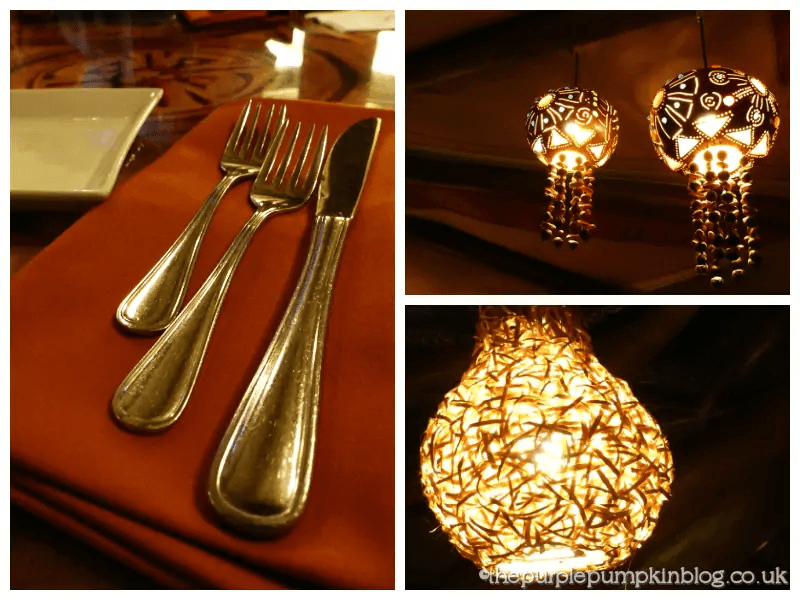 When it comes to table service restaurants on the Deluxe Disney Dining Plan you are entitled to one appetizer, one entrée, one dessert and one non-alcoholic beverage (usually refillable) for one credit per person.

We had to wait quite a while before our server got to our table, and when she did, she explained that she was also training another server, and asked if we would be okay with that. Of course – everyone has to learn! She made a few suggestions on the menu, and for one of the only times, we paid out of pocket for an extra appetizer as we couldn’t make up our minds! Well, we could, but we also had heard that the breads here were awesome, so we had to try them too! All the apps were shared between us all. Him: Appetizer Sampler for Two – potato and pea samosas, lamb kefta sliders, and choice of chana tikki or seasonal soup ($15.99)

I just loved the way the bread service was presented – on a huge wooden board. It look amazing! Not enough bread to dip ratio though! Although, we are bread fiends, so that may also be the reason! The dips ranged in taste from mild all the way through to very hot. So we didn’t eat them all. For our breads we chose naan, garlic ginger naan and onion kulcha. A food server (rather than our waitress) had brought the bread out to us and didn’t bother to go through the dips, so when our waitress came to meal check us, she ran through them when she asked if the server had told us what they were. 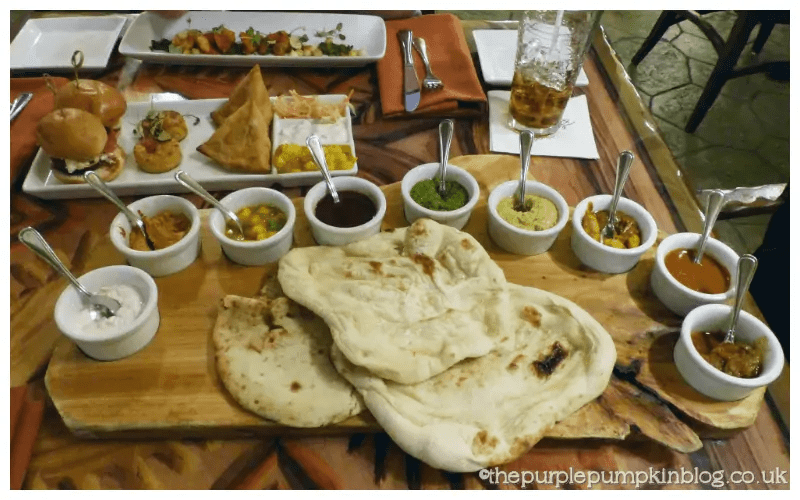 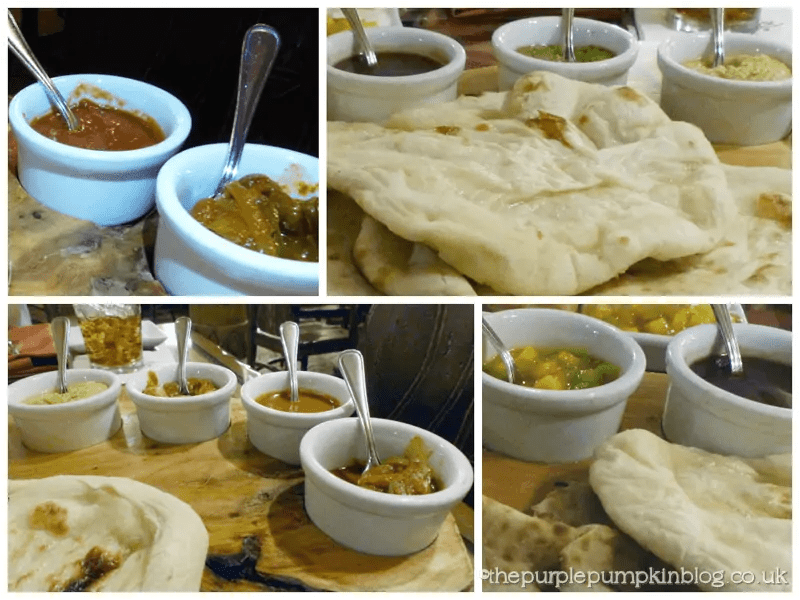 We decided to have the channa tikki rather than the seasonal soup (which I believed had coconut in it, and if you’ve read previous reports, you know that my husband does not do coconut!). These were little chickpea patties. Very nice, and a touch of spice to them. The samosas where a little on the dry side, but had a good flavour, and the lamb kefta were good too. On the side was a carrot salad, some mango chutney and a yoghurt dip. 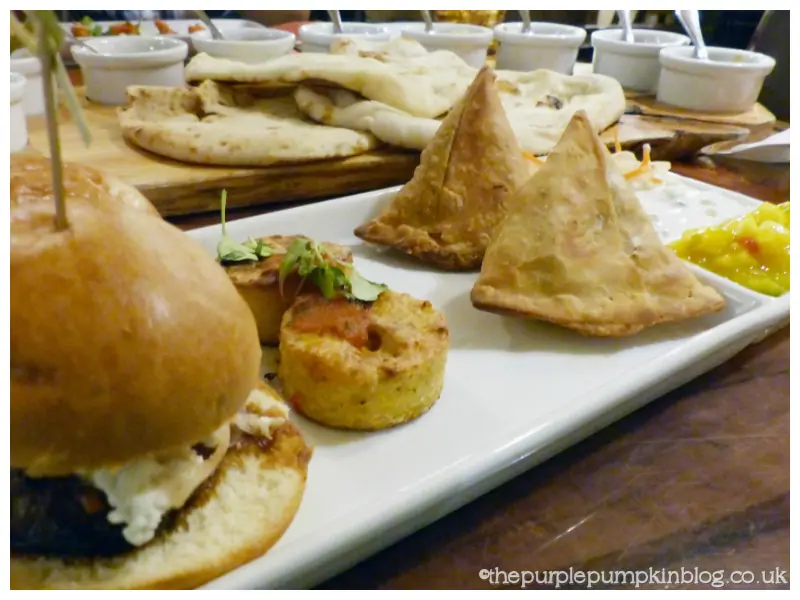 The shrimp weren’t overly spicy, and they were presented nicely on the long plate. Our entrées were brought out to the table before the appetizers had been cleared away, which wasn’t very good. The food server just stood there not quite knowing what to do! So far, for service this was not boding well! Him: Tandoori Chicken – with seasonal slaw and coriander khichdi ($19.99)

I had a hard time deciding what I wanted, but in the end, I chose two dishes from the “Slow Cooked in Gravy, Simple and Well Seasoned” section. The other choices were Butter Chicken, Chicken Vindaloo and Beef Shortribs. I decided to try the five-grain pilaf with my choices of the Durban Shrimp and the Goan Seafood Curry.

Each dish was served in separate bowls on a long plate, which I decided to dump out onto the plate to eat. Everything was delicious, but very spicy! Especially the Durban shrimp! Steve also had a hard time picking from the menu. He likes to try different foods, but quite a few that he fancied, when he checked for coconut, turns out they had coconut in. So he went for the chicken tandoori, which is not the hideous bright red that it is here in the UK! 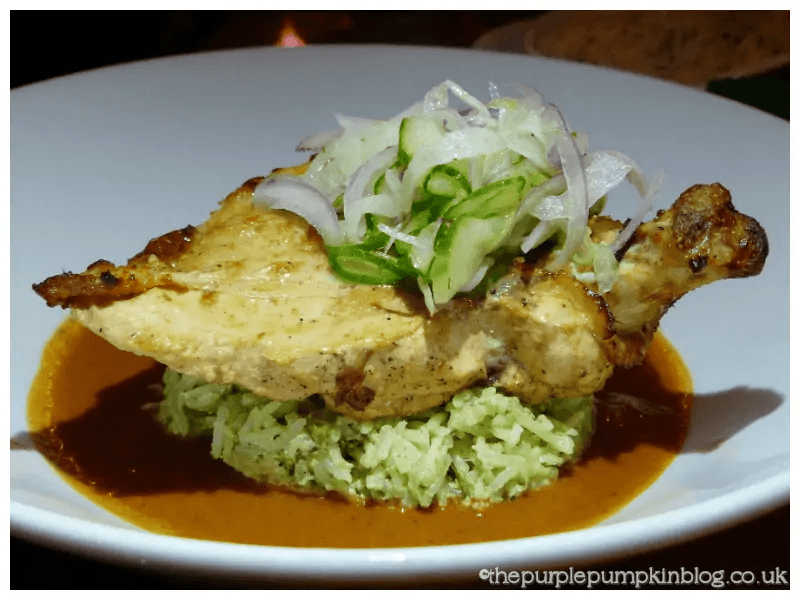 [sarcasm] Liam, surprised me by just having steak, [/sarcasm] and didn’t want the Indian style roasted potatoes with them either. They didn’t have chips in this restaurant so he had to settle for rice instead. The steak was good. I wish he’d tried something else though! I think we replaced the “eat burgers at every meal” we had last year with “eat steak at every meal” this year! 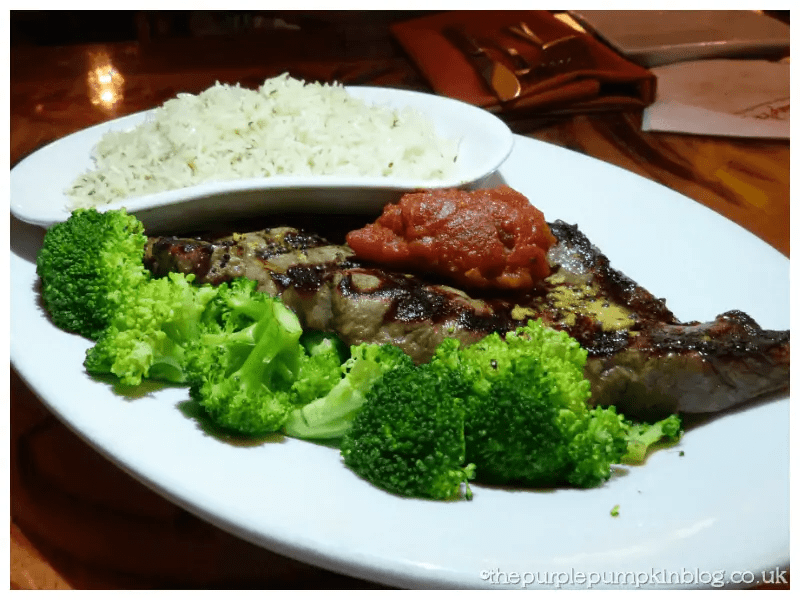 Understandably, by now we were stuffed, but dessert is included, so we took our choices to go. 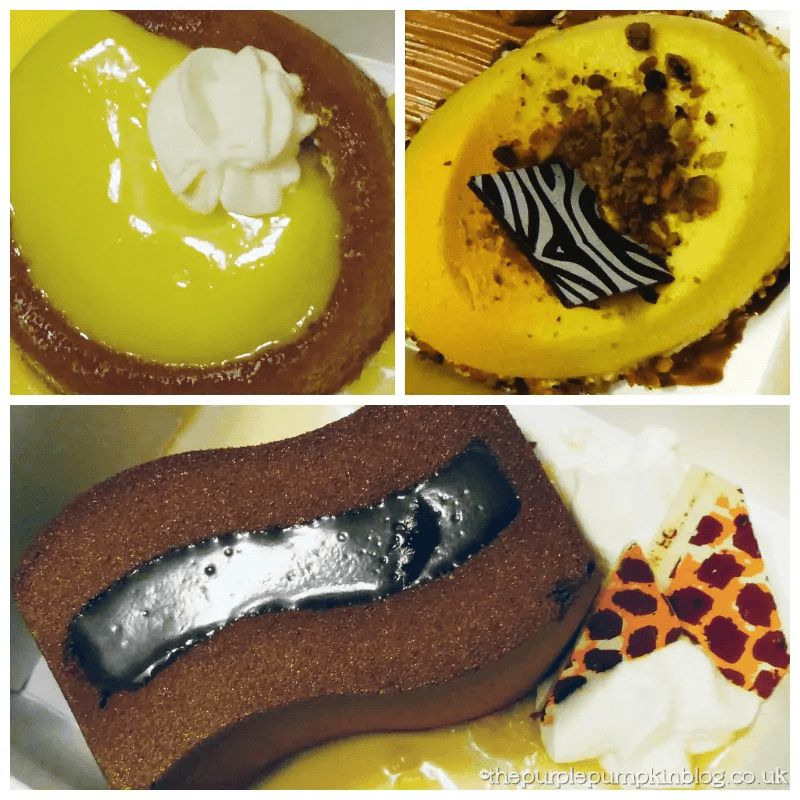 We had to wait a long time for these to come out to us, and we ate them when we got back home to Old Key West. They survived the journey, and it was nice to see that even though they were take out, they were still presented nicely in the boxes. All tasted good, even after being taken home! 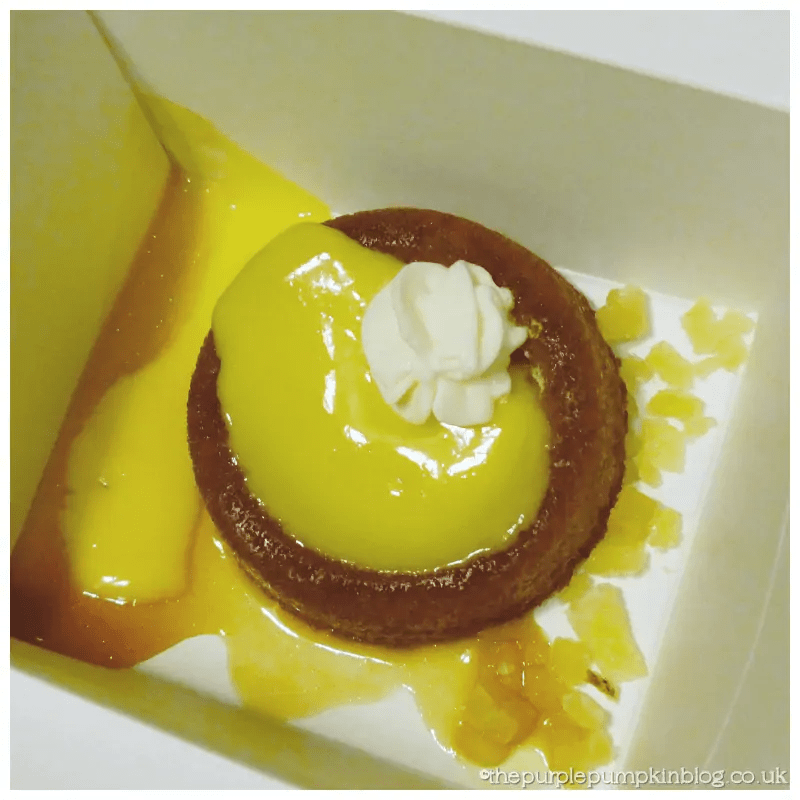 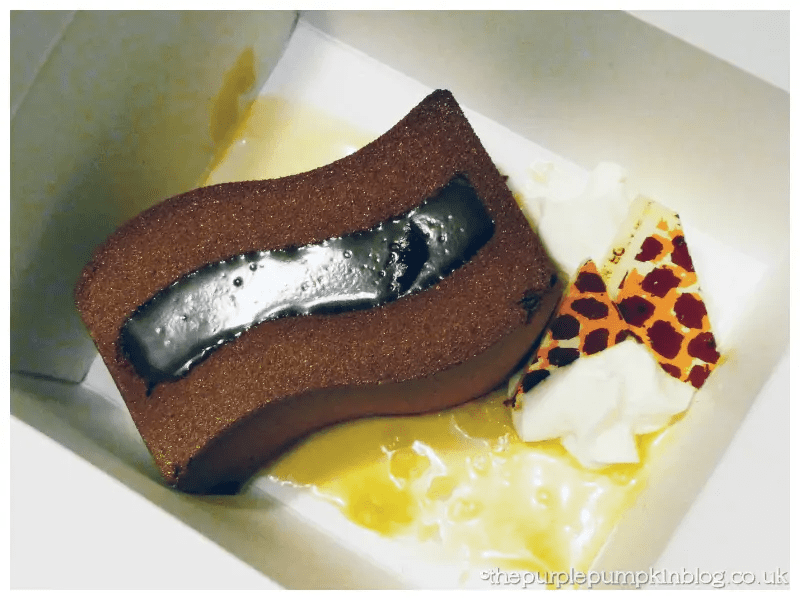 Once we received our desserts, we asked for the bill, which when it finally came to us, was completely incorrect. When we eventually caught our server’s attention about it, she tried to blame it on her trainee, which I didn’t think was too professional of her. We then waited nearly 20 minutes for her to bring the correct one out to us! Steve even went to the front desk to find out where she was, he was not impressed at all. As it turns out, I don’t know how she did it, but we didn’t end up paying for that extra appetizer, and nor was an extra credit taken for it.

We really enjoyed the food here, but the service on this occasion was not the best. I know it was busy, but that still isn’t an excuse, especially as the restaurant did empty out a little later on. I would go back, because the food was really tasty, and different too…and I would ask for a window seat so we could look out onto the savannah, even if it meant we had to wait a little longer!

We nipped into the resort shop at Kidani Village on the way out of Sanaa and I bought a box of Zebra Domes (4 in a box), which are on the buffet at Boma for dinner, and are pretty lush! I don’t have a photo of those, but here is one from our last trip! They are a little truffle type dessert which kind of taste like Baileys! 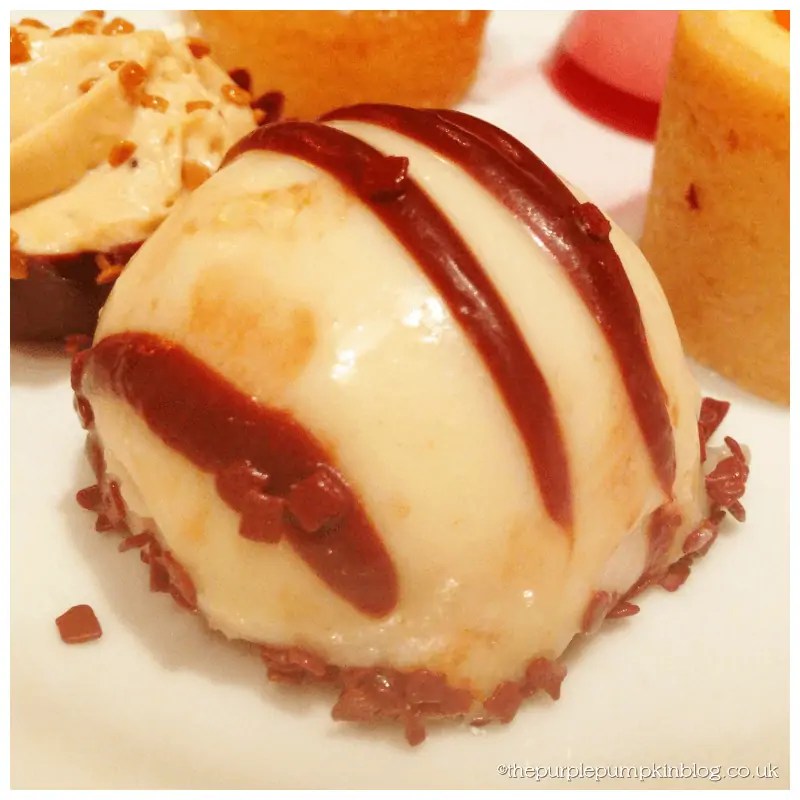 We then made our way back to our car to drive home and get some shut-eye before our visit to Kennedy Space Center tomorrow!