I was having a bit of a sort out of my photograph files on my computer and I found my old folder of themed birthday cakes that I have made over the years. Back in the day I used to make cakes and cupcakes for friends and family, and I LOVED doing it – even though, quite often it would stress me out!! I’d literally be crying about making it as perfect as I could, and worrying if they would like what I had made for them! I knew that my cake recipe was solid – as far as I am aware, I’ve not had any one say that I make a bad tasting birthday cake! But the design, the piping, the sugarpaste…what if that wasn’t perfect, what if I didn’t deliver something good enough?!

I had always meant to revisit these cakes and share them here on my blog, but as always, I find other things to write about and things get pushed out to the sidelines! My cakes was one of those things…but I’m going to share 12 of the themed birthday cakes I’ve made, right now…

Fifi and the Flowertots Birthday Cake

I made this cake for an old school friend – she asked me if I knew who Fifi and the Flowertots were – I had no clue, so it was Google to the rescue to see what it was! I made Fifi, her watering can and the flower pot out of sugar paste (fondant) that I had coloured with food dyes, and the cake was baked in a rectangular pan that I cut into a number one. I covered the cake in purple sugar paste, decorated it with white daisies and piped white stars along the edges. I also made a batch of cupcakes that I decorated with matching purple fondant and pink flowers. I piped the birthday greeting onto a piece of white fondant and then fixed in place once dry, edging it with piped stars. 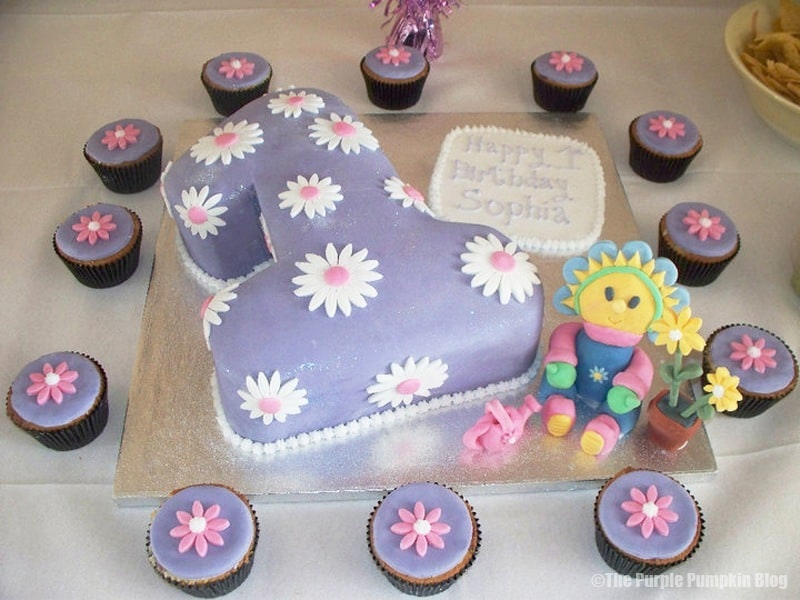 I made this cake for my son’s 10th birthday, and really should have recreated it when I threw him him a Nintendo themed birthday party for his 13th! But I was so busy with all the other details I ended up making Starman Cupcakes for that instead. Anyway, back to this cake! I know Mario is a bit on the chubby side, but hey, you still know that it is him!! I also made a Super Mushroom and a 1-Up Mushroom to sit alongside him. I used my trusted sponge cake recipe to make a round cake which I covered in white sugar paste and dusted with blue food dust. I used an embossing tool to make the stars around the cake, and then, feeling it was a little plain, add lots of yellow fondant stars!  Finally I piped stars around the edges, and wrote my son’s birthday greeting around the cake. This is still one of my all time favourite cakes that I have ever made!

In The Night Garden Birthday Cake

Another cake, for another old school friend, and this time it was characters from In The Night Garden! I made Igglepiggle (not forgetting his blanket!) and Upsy Daisy (I’m laughing that I managed to make her put on weight as well!!) and sat them on top of a round cake that I had covered with green fondant, that I then dusted with green food dust. Some sugar paste flowers and a birthday greeting finished the cake off.

I know it’s not a birthday cake, but this was the first two-tier cake I had made, and I was so proud of how it turned out. This is one of the cakes that I talked about earlier, tears worrying about whether my friend would like it! I made the pink bear and letter blocks from sugar paste, and they sat at the top of the cake. Fondant hearts and flowers went around the sides of both tiers with piped stars around the edges.

I was asked to make a boxer dog cake, and instead of tackling making one in sugar paste (that invariably would look like it would need to go on a diet!) I decided to make a run out of the dog instead. This is a technique using royal icing, and is a lot easier to do than it might look! After covering a round sponge cake with blue sugar paste, I dusted over some lustre dust for a shiny finish.

I made this cake for a friend’s 40th – he loves the Doors, so I had a picture of Jim Morrison printed with edible ink onto rice paper (thanks ebay!) and placed it on top of a sponge cake that I had covered in white fondant, dusted with black food dust. I piped around the top and the base of the cake (to hide edges, ssssh!) and piped some musical notes around the sides too. In addition, I also made a batch of ’40’ cupcakes for him.

I said yes to making this cake for one of the mum’s at my son’s school before even beginning to think how I was going to tackle it! In the end, I made a run out of the label to sit on the cake, which I cut out from a rectangular cake and covered with white icing for the bottle, and red for the cap. The birthday greeting went onto a piece of fondant – I usually pipe white first to give me a guide before adding the colour on top.

Actually, I did end up writing about this cake on my blog here. It was another cake that I panicked about – trying to get the red fondant to look like the iconic lips was stressful, but I managed to do it! I hand cut all the letters, which was a labour of love! The cake is shiny because it’s had a final spray of vodka to get ride of excess icing sugar!

These cupcakes were in with the order for the Rocky Horror cake above…I had to make 50 of these bad boys (or should that be, wicked witches?) I made the legs and ruby slippers (cement boots by the look of it!) from sugar paste, made a batch of cupcakes and then dumped the cake upside down onto the legs to mimic Dorothy’s fallen house!

Another old school friend got in touch after seeing the two-tier cake I’d made for another friend, and asked if I would make a Halloween themed cake for her daughter’s christening. You just KNOW I am going to oblige a request like that! I made a pink bear, and popped a purple witches hat on her head, she had a pink pumpkin sitting by her side. I wasn’t sure how to decorate the sides of the cake, and then found a set of ivy cutters in my decorating stash, so cut lots of different leaves from sugar paste and cascaded them down the cake.

I made these cupcakes for my niece’s 1st birthday in 2013 – the theme of her party was owls, so owl cupcakes it was! I bought an owl shaped cookie cutter set online and used that to make the toppers for these vanilla cupcakes.

I definitely, definitely cried with stress over this cake! I even had to draft in my husband to help me with the covering of the cake because I was in so much turmoil over it! In the end though, it looked great, and my friend’s little girl was over the moon! I vaguely knew who Peppa Pig was (she wasn’t around when my son was a littlun), and made her from sugar paste with a little crown on her head. Daisies helped to cover some icing anomalies (sssshhh), and by I cut the letters for the birthday greeting using alphabet cutters.

Ahhh, it’s been a lovely walk down memory lane as I’ve shared and written about these cakes, and looking back on them, years later, I have to give myself a little pat on the back and say that I didn’t do too bad a job at all!