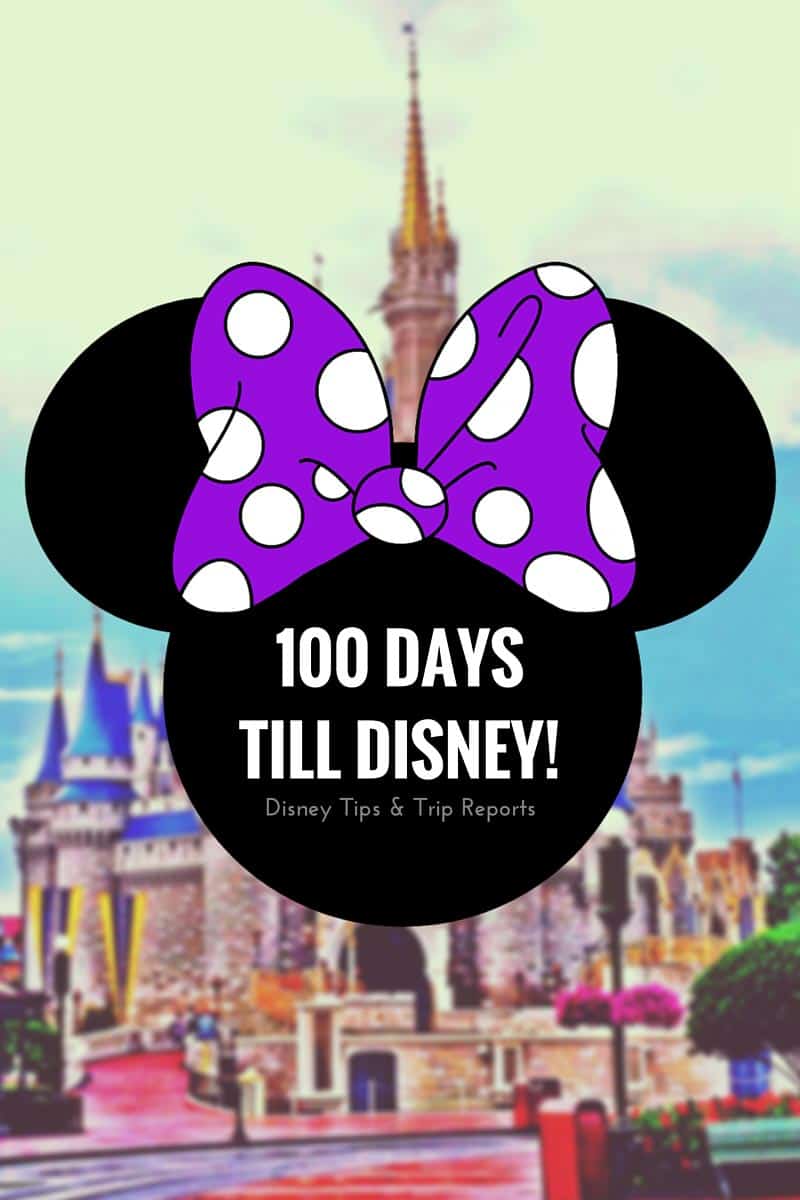 I’ve still not finished 2015’s Disney Trip Report – Halloween in the Wilderness (which you can read over on my Disney Tips & Trip Reports website), yet, here I am with the pre-trip report for our next trip in 100 days time!

Since I do have that Disney focused site now, I’m going to go more in depth over there, but wanted to write a mini pre-trip report on The Purple Pumpkin Blog too (just in case you don’t read my other one!) and keep it as short as I can.

On our 2015 trip, we made the big decision to become Disney Vacation Club Members, which in its simplest terms is like a Disney Timeshare. You pay a set amount for points that you can use each year, or bank them to use the following year. As a thank you for purchasing our DVC membership, we were given a free set of points (matching the ones we bought), effectively doubling our points for the next year. So we put them to good use, and are staying at Walt Disney World for a whole month! OMG, I’m so excited, I can’t even!!

The Cast Members – who we are!

This is just one of the changes for our 2016 trip – it’s just my husband, Steve and me this year… My son, Liam, decided that he didn’t want to come along this time around, as we’ve been 3 years in a row… Also, the timing was a bit off for him – he has college, potentially starting an apprenticeship, and has a weekend job too. You see, we’re going in September to celebrate my 40th birthday!! I did double, triple, and quadruple check, but he was okay with not going. He’ll be staying with his dad for the time that we are away.


I guess I knew this day, that he didn’t want to go on holiday with his mum and step-dad, would come sooner or later. He is on his way to his 18th birthday, and not my baby boy anymore. (Excuse me while I go and sob in the corner for a bit!)

So yeah – a holiday with just the hubs and me! That’s definitely new for us! We have never been abroad together as a couple, so visiting Orlando as just the two of us, and without a child is going to be quite weird – but nice at the same time. It’ll mean we can have a few too many drinks if we want to, and do more grown up things, or things that Liam would actually find boring.

The photo of us below is on our first trip to Magic Kingdom (Liam actually took the photo) in 2011.

But, we’re not going to be completely alone, as my brother and his fiancee, Meg will be joining us for 2 weeks. They arrive the night before my birthday, and we plan on hanging out during their two week stay. It was on my bucket list to go to Walt Disney World with my siblings – I wish we could ALL be there for my 40th, but both of my sisters work in education, so time off work in September is out of the question for them :( One day… when I win the lottery… I’ll take us all!

Welcome Home – where we are staying!

Thanks to all our DVC points, we are doing several split stays on our holiday to Florida this year. It’s going to mean a bit of re-packing, and some organisation, but we are both really excited about the different resorts that we will be staying at!

Our holiday will actually start with a night at the Hyatt Regency Orlando hotel, which is inside the airport itself. Our flight lands early evening, and we didn’t want to be driving the 2+ hours it will take us to get to our first Disney resort after a long flight, and time difference. You see, our first stay isn’t actually in Walt Disney World, but at Disney’s Vero Beach Resort on the Atlantic Coast! We are spending 5 days there, before driving home to Disney’s Polynesian Village Resort. I say home, because, the Poly, is our home resort – that is where we own a property, thanks to DVC. I can’t wait to stay at this resort. I fell in love with it, when we first visited it in 2013, and vowed to one day stay there… and here we are in 2016, staying at that very resort!

We are then moving on to Animal Kingdom Lodge – Kidani Village, for a week long stay. This is another deluxe resort that I have always wanted to stay at – I think it is just beautiful! Our friends are DVC owners at this resort, and I know how wonderful they think it is.

And, because of the way points work with DVC, we tagged on an additional day and night at Disney’s Saratoga Springs Resort & Spa – this was only so that we could be in Walt Disney World for the 45th anniversary on the 1st October 2016. We are on the wait list (in the hope someone cancels) for a resort closer to Magic Kingdom, but whatever happens, I’m going to make sure we’re up bright and early to be in the park. I don’t know if they actually will do anything to mark the occasion (I hope they do!), but I know I want us to be there for this special day in its history.

Planes & Automobiles – getting there, and getting around!

We’ve flown to Orlando with British Airways twice now, and as such, have collected enough points for a decent discount on flights. So that’s who we are flying with again this year. The airline fly from Gatwick to Orlando International Airport, and we’ve always had a good flight and service with them. Because we’re flying out of high season, with just the two of us, and have a discount, the flight prices were so much cheaper than we’ve ever paid before (we usually go in August, when prices are high, and in 2015, during October half-term, so ditto), and just over £1000 for the tow of us. For us this is cheap, when I look back at what we’ve paid in the past (I keep a record!), per person the cheapest we’ve ever paid was £680 each!

We’ve hired a car for the duration of our stay. It was cheaper to hire this separately, rather than include it with the flight prices. We are hiring from Alamo, as we have done in the past. You don’t know what car you have until you arrive. But we have selected a premium size car, which is a Chevrolet Impala or equivalent. The Impala is a car I’ve driven (I do pretty much all of the driving in Orlando) a few times now, and I love the car!

Because my brother and his fiancee are going to be spending two weeks in Orlando with us, and they want to do as much as possible, we are going to be cramming everything in! It’s been several years since we’ve done ALL the theme parks in one holiday – the last time being 2013 – so I hope Steve and I’s old bones can handle it!!!!!!!! This is also the first time since 2013 that we have had to buy tickets from a ticket agency, because for the past two years, we’ve bought them from Disney direct when booking our hotel.

In the past we have used Attraction Tickets, and didn’t hesitate to use them again for the big 40th birthday trip. I like that you can pay just a £10 per person deposit, and pay it off in instalments. They provide real tickets, and not just e-tickets, and have free 7-day delivery. You can pay to have your tickets delivered the next day if you wish. I know how exciting it is when the envelope of tickets drops through the door!

Attraction Tickets Direct have kindly provided Steve and I with Universal Orlando 2-Park Bonus Tickets, but we have paid for all of our other tickets, which include tickets to:

Throw in the other things we’ve got planned, and I think we’re going to need a holiday to get over the holiday!

That said, I’ve turned to my trusty Orlando + Walt Disney World Planner – which is a free printable I made and shared with you – to organise our days.

Everything Else – this is long enough already!

I said at the top of this post I would keep it short. The only thing short about me, is my height!! There is still so much to tell you about the planning of this Walt Disney World, and Orlando holiday, that everything else in the pre-trip planning report will be found over on Disney Tips & Trip Reports, including where we have already got our dinner reservations, my 40th birthday plans, what we’ll be doing at Vero Beach, shopping, Mickey’s Not-So-Scary Halloween Party, Epcot Food & Wine Festival and lots more besides!

Subscribe so that you don’t miss out on posts from The Purple Pumpkin Blog and if you’re a Disney Fan, make sure you follow me on social media to keep up with the trip when we are there! I plan on doing as much Snapchatting, Periscoping, Tweeting, and Instagramming as I can (in between all the fun!)