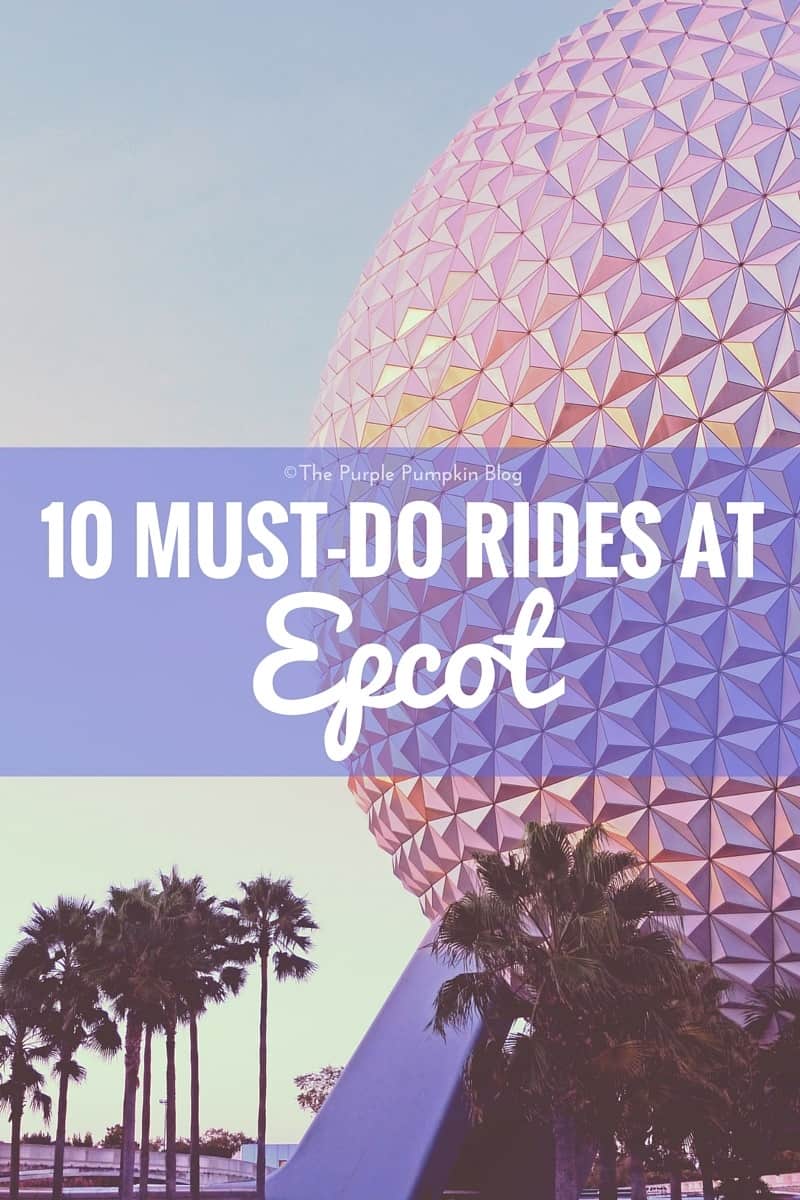 This is my third post in my must-do rides series for 100 Days Of Disney I’m going to share a list of the [10] must-do rides of each of the four Walt Disney World theme parks: Magic Kingdom, Animal Kingdom, Epcot and Hollywood Studios.

Now, I’m only going to be including rides that we have done as a family – so some favourites may well be missing, as we haven’t done ALL the things at Walt Disney World – it’s impossible to do them all in just one trip, even three (like us!) or more…!

Epcot is one of the Disney parks that divides opinion – some love it, some hate it… we love it! Test Track is one of our favourite rides at any of the Disney theme parks, and we can spend a whole day just wandering around World Showcase. I’ll follow this up with a post in the future about our must-dos around Epcot World Showcase, for now, this is just about the rides!

Get ready for a bumpy ride as Captain EO and crew crash-land on the surface of an alien planet to present the Supreme Leader of the Dark Side an important gift. Though well intentioned, the gift is not well received, and Captain EO will have to use some slick moves—and slick tunes, including “We Are Here to Change the World” and “Another Part of Me”—to triumph over the evil forces of darkness. – Walt Disney World

This is an attraction that I think is a must for Michael Jackson fans. The movie was made in his glory days, and has the distinctive Jackson sound. If you’re not a fan, it can be skipped in favour of something else! 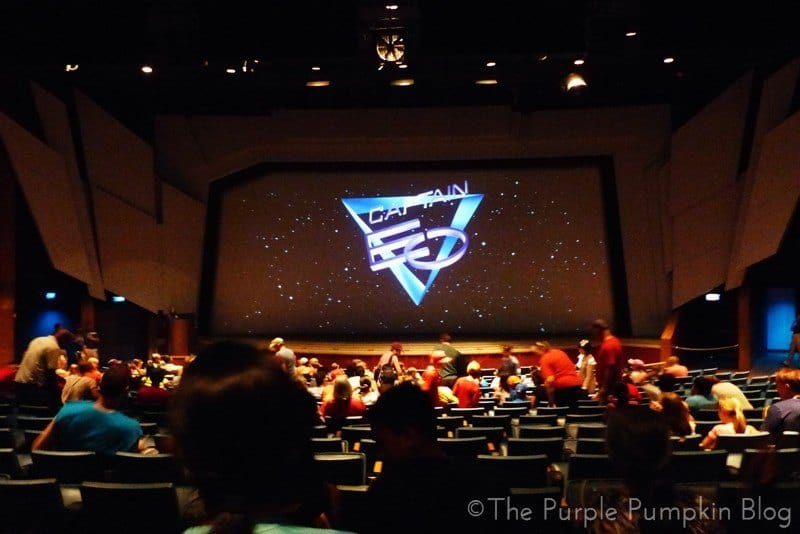 Join Agent P and help solve clues to thwart some of Dr. Doofenshmirtz’s most daringly evil plots. In case you couldn’t see through his disguise, Agent P is the wily secret-agent alter ego of Perry the Platypus, Phineas & Ferb’s faithful pet in the animated Disney series. And he needs your help! – Walt Disney World

To start your mission you visit a recruitment centre at the Italy Pavilion or near the International Gateway to receive your assignment pack. Using an interactive handheld device, you will be guided on your mission throughout the World Showcase Pavilions, including Mexico, China, Germany, Japan, Rance and the UK. Two – four agents can share an interactive device, and missions last from 30 – 45 minutes. We have not done this yet, but I would love to see what it is like, so will have to make time for it on our next trip!

Learn about energy with Ellen and Bill Nye the Science Guy as you encounter an array of prehistoric creatures and discover how fossil fuels were formed. Smell prehistoric swamps, narrowly escape streams of molten lava from an erupting volcano, and see if you can spot Ellen amidst the primordial pandemonium! – Walt Disney World

This is a looooooong ride – it takes about 45 minutes in all, but it’s a good place to get out of the heat and rest your legs for a while. You sit in huge transporters which slowly move around, and the first time we rode it, we were pretty impressed! Some find it a bit slow and boring, but hey, it’s an opportunity for a cat nap!!

Float along to live-action footage of the people and places of Mexico superimposed with animation inspired by the 1944 Disney film The Three Caballeros. And join Panchito, the Mexican charro rooster, and José Carioca, the Brazilian parrot, for hilarity and hijinks as they search for their wayward friend throughout this fun-filled ride for all ages. Will they find him in time for the big finale in Mexico City? – Walt Disney World

I think this is one of the hidden gems in World Showcase – it’s tucked away inside the Mayan pyramid, and rarely has lines. Plus, Donald Duck is one of our favourite characters, and The Three Caballeros

is one of my favourite Disney animated classics!

Journey Into Imagination With Figment

Climb aboard your carriage and get ready for surprises galore as you travel through Dr. Channing’s sensory labs. Little ones will love learning and laughing about the 5 senses—sound, sight, smell, touch and taste—on this madcap musical trip with Figment. – Walt Disney World

This is a classic Disney ride, which has seen several changes over the years. We have only ever done this ride once, and it was a bit of a weird one! However, when the ride ends you can head to ImageWorks which is an interactive play area where you can make music, send digital pictures hom and more.

Living With The Land

Gain a newfound appreciation for where your food comes from on this cruise through the living laboratories of Epcot. Multimedia displays of diverse eco systems, from rain forest to farmstead, bring our agricultural history to life. See specimens of produce from around the world, some modified to jaw-dropping effect, in the pavilion’s 4 greenhouses. Live eels, tilapia, catfish, freshwater shrimp and American alligators are also on display as you travel though the fish farm.  – Walt Disney World

This is one of my personal favourites at Epcot! You ride along in a boat learning about how food is produced, and go on to explore the different foods that Disney is growing – which are used at both Sunshine Seasons, and the Garden Grill Restaurant! There is also a walking tour called Behind the Seeds which is an in-depth look at the facilities. This is an additional cost.

In the grand Disney tradition, Imagineers pulled out all the stops to make fantasy reality, bringing California to life using a 180-degree IMAX projection dome and aerially captured footage that reproduces the flight path of a hang-glider. Thrill as you’re lifted 40 feet in the air, engulfed in the stunning panoramas, swept from one scenic locale to the next! – Walt Disney World

This is a ride that draws long lines, so a FastPass+ time slot is a must if you don’t want to be waiting a couple of hours to go on it! Try to get a seat on the higher row if you can, as you then don’t have feet dangling in your peripheral vision, which I think spoiled it for us when we went on it back in 2011. We haven’t been on it since, but hope to ride it again soon. You can’t help but duck as a golf ball comes flying towards you, and it’s pretty awesome to smell the fragrance of oranges as you fly over the groves.

Take a ride through time for a look at the landmark moments that made today’s communications technology possible. Lifelike Audio-Animatronics displays and the soothing tones of narrator Dame Judi Dench give you an inspiring history lesson on this leisurely, 16-minute Omnimover-style ride. – Walt Disney World

You know the giant golf ball at the entrance to Epcot? That is Spaceship Earth and it is a Disney classic ride! You sit inside little buggies that slowly wind their way up inside the building (we always pull a stupid face when they ask to take your photo!) and comes back down again, learning about history as you ride. At the end you answer questions on the screen to design the kind of future you want to live in, which for some reason we find hilarious because of the aforementioned stupid faces we pull!

Buckle up in a 6-passenger “simulation car” and put a virtual vehicle that you created to the test.

Discover how your custom concept vehicle performs thanks to easy-to-read visual charts as you rev through rough terrain and obstacles along the winding Test Track circuit. Fly through straight-aways, maneuver switchbacks through inclement weather, hug curves banked at 50-degree angles and scale hills that are up to 3-stories high!

At almost a mile long, with peak speeds of 65 mph, Test Track Presented by Chevrolet is a thrilling ride you’ll want to experience again and again! – Walt Disney World

If there is only one ride we do at Epcot, it is this one – it is by far one of our favourites (across all of the parks actually!) It has had an upgrade in the past couple of years, where you now build your car on a screen, before taking it out on to the Test Track. My son is always in charge of the vehicle building! The best part is when you burst out of the inside area into the hot Florida sunshine!

Got a burning question for Crush? This intimate 15-minute conversation is your chance to ask him! Using his high-tech “hydrophone,” Crush can communicate directly with little dudes and dudettes about literally anything that’s on their minds. – Walt Disney World

This attraction is totally awesome, dude! Younger children will be in awe at Crush talking with them, and to be honest, us grown-ups thought it was pretty cool too! A lot of fun!

What’s your favourite ride at Epcot?