10 Free Things To Do At Walt Disney World (Without Stepping Foot Into A Theme Park!) 57/#100DaysOfDisney

Home » Everything Disney » 10 Free Things To Do At Walt Disney World (Without Stepping Foot Into A Theme Park!) 57/#100DaysOfDisney

There is no getting away from the fact that going on holiday to Orlando and Walt Disney World is an expensive one – with long haul flights, (where most of the budget goes), accommodation, theme park tickets, food and drink, souvenirs, and shopping – everything soon adds up! However, there are loads of things to do for free at Walt Disney World, without stepping foot into a theme park! 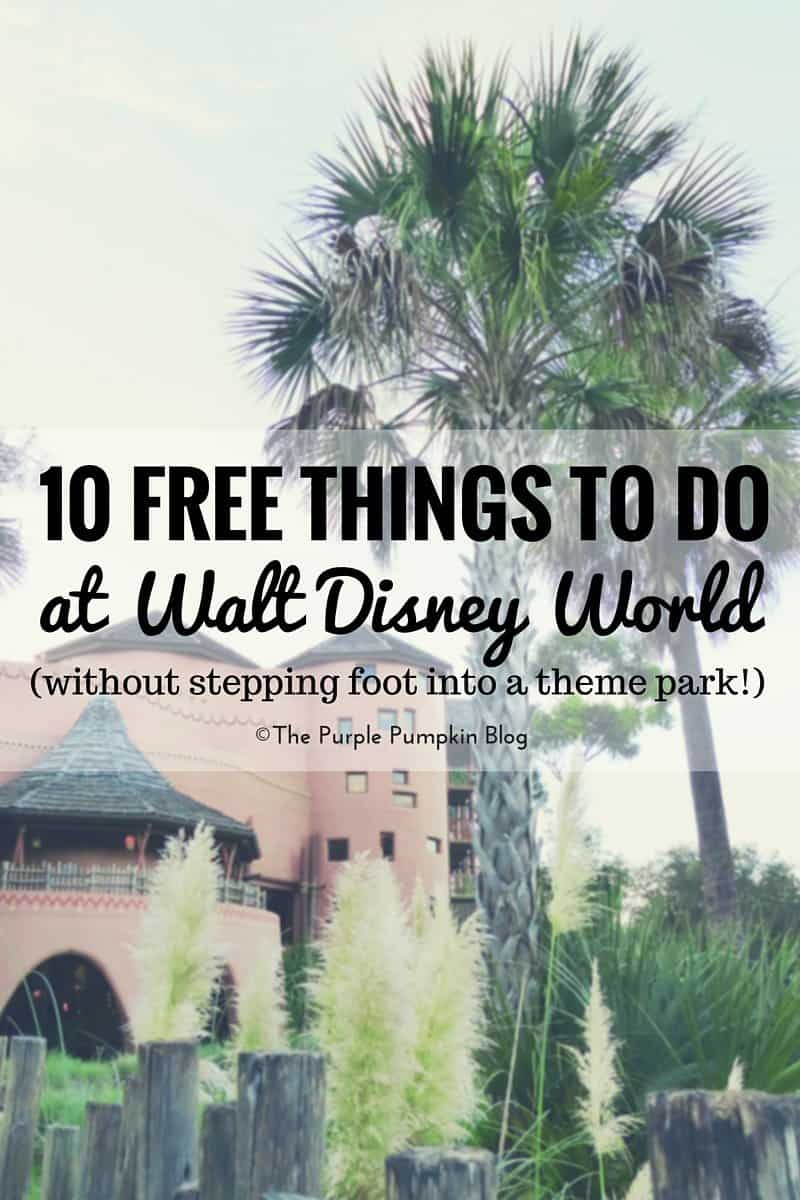 Did you know that even if you are not staying at a Walt Disney World Resort Hotel, you can still go and visit them? You are usually allowed to park for free for around 3 hours – this is enough time to have a meal and have a wander around the resort. Simply drive up to the gate and tell the guard that you are visiting the resort. If you want to stay longer, there is the option to pay for valet parking, which is currently $15 for the day. Once you have paid for valet parking at one resort, you can always drive to another and you don’t have to pay again.

There are times when the hotel parking lot may be to busy, and you will not be allowed in without a dining reservation, so, alternatively, you could park at Disney Springs (Downtown Disney) and hop on a Disney bus to the resorts instead. The one thing you cannot do when visiting resort hotels, is go into the swimming pools, but pretty much everything else is up for exploring!

Disney Springs is also another fabulous place to visit – it’s currently free to park there and there are loads of free things to do!

10 Free Things To Do At Walt Disney World – Without Stepping Foot Into A Theme Park!

Before searching for Hidden Mickeys, you’ll need to know what they are! Hidden Mickeys are camouflaged images of Mickey Mouse (the silhouette of his head and ears) that Imagineers and Artists have concealed all around the Walt Disney World Resort. You’ll find them in the theme parks, in the water parks, in the resort hotels, at Disney Springs, and beyond! You’ll end up seeing them back in ‘real life’ too (as I did recently at BlogStock!)

(buy the book in the US here), to start making a serious effort to find them, reading through before we went on holiday, so we could find some of the more elusive ones! There is also a Hidden Mickey App (£5.99 on iTunes) which I bought so I could check off the ones we did found (there is free Wi-Fi around the Walt Disney World) and check for Hidden Mickeys near us, which was pretty cool!

I’ve just checked the app, and there are 25 Hidden Mickeys at Disney’s Wilderness Lodge (the hotel we are staying at this year), so there is lots to keep you busy!

2. Watch a movie under the stars

All of the Disney hotels have regular outdoor movies and you don’t need a ticket or have to pay for admission. You don’t even have to be staying at that resort! This website has the schedule so you can check which movies are showing in advance. Most movies are shown on blow up screens, but the most elaborate is at the Disney’s Fort Wilderness Campground & Resort; which leads me perfectly onto the next free thing to do at Walt Disney World…

3. Make s’mores and have a campfire sing-a-long at Disney’s Fort Wilderness Campground & Resort

This is something we have been meaning to do since our first trip to Orlando in 2011, and I really hope we do it this year! Arrive at 7:30pm for the lighting of the campfire, and you can either bring your own marshmallows, or buy one of the s’mores kits available for a few dollars at the concession stand. The campfire sing-a-long starts at 8:00pm with Chip ‘n’ Dale… do check the accurate times when you visit, as they can change depending on the season.

There was a time when you could watch the fireworks from the beach at Disney’s Polynesian Village Resort, but I did hear that they are confining that area to resort guests only, or if you have a dining reservation, however, do not despair, as there are other places you can go!

On our trip in 2014, we didn’t watch Wishes once from inside the park! The photo below is from when we were dining at Narcoossee’s, we were still eating when the fireworks started, but you can see everyone out on the verandah.

We haven’t visited all of the Disney resort hotels, but the ones we have been to are pretty awesome, and the attention to detail and theme is second to none. Visiting Wilderness Lodge last year for dinner with friends made me fall in love with it, so much so, that I booked our stay here for 2015! There are great photo opportunities, shops to explore, places to buy food and drinks, or just take in the surroundings.

There are two monorail loops at Walt Disney World. One takes you around 3 resort hotels – Contemporary, Polynesian Village and Grand Floridan, and to Magic Kingdom; and the other goes to Epcot.  You get some great views as you ride the monorail around the three aforementioned resorts, but we have never been on the monorail to Epcot before, so can’t tell you what that is like – but it’s something for us to do next time! And don’t forget you can get off at the hotels and have a look around before getting back on, the stop at Contemporary is inside the hotel itself! It’s pretty awesome!

If there is one thing that Disney does well, it is free transportation! There are boats that travel around Seven Seas Lagoon and Bay Lake, near Magic Kingdom and the resorts nearby: Grand Floridian, Contemporary, Polynesian Village, Wilderness Lodge, and Fort Wilderness. There are the boats that travel from some resorts to Disney Springs (Downtown Disney): Old Key West, Saratoga Springs, and Port Orleans French Quarter, and Port Orleans Riverside. And finally, there are the Friendship Boats in the Epcot and Hollywood Studios area on Crescent Lake: Disney’s BoardWalk, and Yacht & Beach Club.

Bare in mind that the weather and water conditions can stop the boats from operating, (which happened to us, just as we got on a boat from Downtown Disney to Old Key West, and we ended up getting a cab back as it was pouring down with rain!). But the relaxing atmosphere and the scenery makes boat rides at Walt Disney World a lovely free thing to do!

8. See the animals on the reserve at Animal Kingdom Lodge

This resort is second on my list of resorts to stay at, because the some of the rooms have views of the savanna! But you don’t have to stay at the resort to seem the exotic African animals – which are spread across three savannas: Sunset, Arusha, and Uzima. Each savanna has its own look and feel, and you are best to visit at dusk when the animals are more likely to be seen. At night, Cast Members hand out night-vision goggles!

Whenever we dine at Animal Kingdom Lodge, we’ll go and take a look out at the animals roaming.

Disney’s BoardWalk is built around a lake (you can catch a Friendship Boat from here) and themed like an old fashioned boardwalk (think Coney Island in the 1940s). It is stunning at night with everything lit up. You’ll find places to dine, to grab a snack or drink, places to listen to music or to dance, and watch street performers like jugglers. The atmosphere is just lovely, and I hope we have the time on our next trip to spend more time here.

The pageant can only be seen outside of the theme parks, and really is one of the hidden gems at Walt Disney World. The charming sea creatures both mythical and natural light up the lagoon, with a bright green sea monster leading the way! The Electrical Water Pageant starts at 9:00 pm at Disney’s Polynesian Resort, and continues around Seven Seas Lagoon to Grand Floridian (at 9:15 pm), to Wildnerness Lodge (at 9:30 pm), Fort Wilderness (at 9:45 pm) and finally, Contemporary (at 10:10 pm), and outside the entrance of Magic Kingdom (at 10:35 pm). Showtimes are approximate, and subject to change or cancellation if there is inclement weather.

We have only ever managed to catch little snippets of it, but it’s so pretty to watch!

Initially I was going to write 20 things to do for free around Walt Disney World, but, I’m going to save the other ten for another time! As I’ve written this out, I realise just how wonderful the places outside of the theme parks is, and how much there is to see and do. I think one year, I’m going to take a few days out to go and tour resorts at length!

I hope this has given you some ideas of the free things to do at Walt Disney World – what would you add to this list?