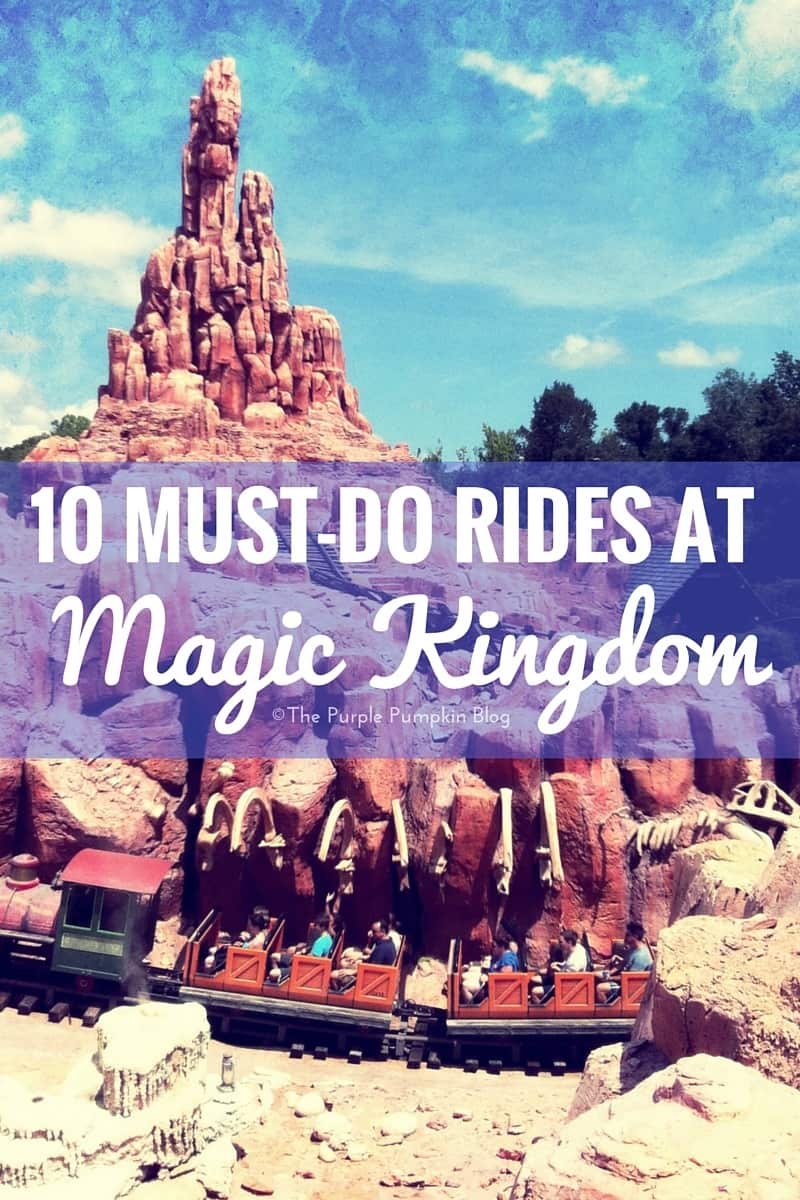 For the next 4 Thursdays of 100 Days Of Disney I’m going to share a list of the [10] must-do rides of each of the four Walt Disney World theme parks: Magic Kingdom, Animal Kingdom, Epcot and Hollywood Studios.

Now, I’m only going to be including rides that we have done as a family – so some favourites may well be missing, as we haven’t done ALL the things at Walt Disney World – it’s impossible to do them all in just one trip, even three (like us!) or more…! Which is why this list of must-do rides at Magic Kingdom, does not include Space Mountain or the new Seven Dwarfs Mine Train!

I’m also not going to put them in any sort of order, because, everything is relative isn’t it? What I might think is the best, someone else might think is the worst! The rides I have included in my list are ones that we simply must do whenever we go to Walt Disney World! I’ll just put them in alphabetical order – easiest thing to do!

I’ve not included shows and entertainment, like Wishes fireworks at Magic Kingdom, or Festival of the Lion King at Animal Kingdom, as they fall under a different category. You can check out the different shows at Walt Disney World here. Sure it gets confusing, as you don’t really ride Monsters Inc. Laugh Floor – you sit and watch the show… arrgh! Oh well, let’s just get on with it shall we?

An indoor/outdoor mine train rollercoaster which swoop around turns and dip and drop into canyons and caves, darting through the ghost town of Tumbleweed. Legend has it that a supernatural force dwells within the mountain. When gold was first discovered in the 1850s, a mining company was established. But soon, eerie things began to occur. Miners heard ghostly sounds, cave-ins became frequent and equipment mysteriously failed. Trains would take off and race through the mine and around the mountain driverless! Word got out that the mine was haunted and Big Thunder became another ghost town. – Walt Disney World

This ride can you throw you about a bit – and even though the dips are small, you do get a bit of air time off your seat! 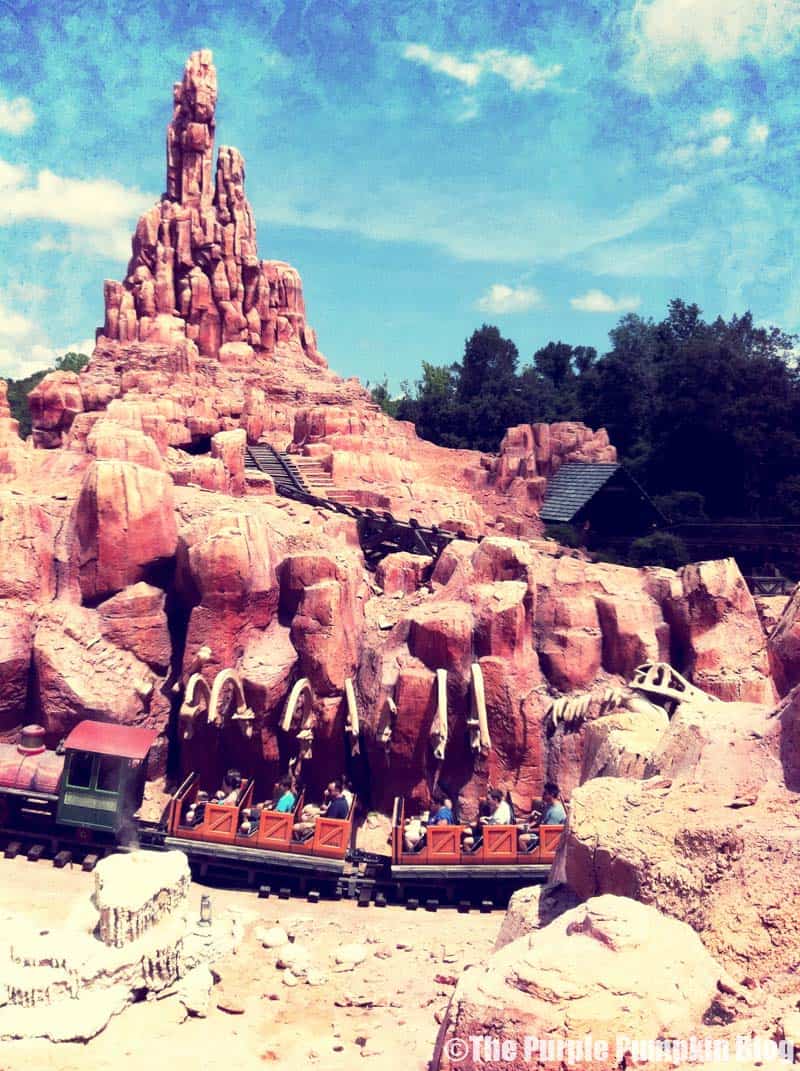 Take aim with your space cannon and fire an invisible infrared laser at a constellation of “Z” insignias. Following an introductory mission briefing with Buzz Lightyear, board an XP-37 star cruiser, take hold of the onboard cannon and begin your space crusade into the Gamma Quadrant. With each “Z” insignia you hit, you’re rewarded with beeping sounds, flashing lights and points. The more targets you blast, the more points you’ll receive. As expected, harder-to-hit targets are worth more points. – Walt Disney World

It’s always a time for a bit of friendly family competition on this ride! I always lose, because I don’t concentrate as much as my son and husband at hitting the targets – that’s my excuse and I’m sticking to it! 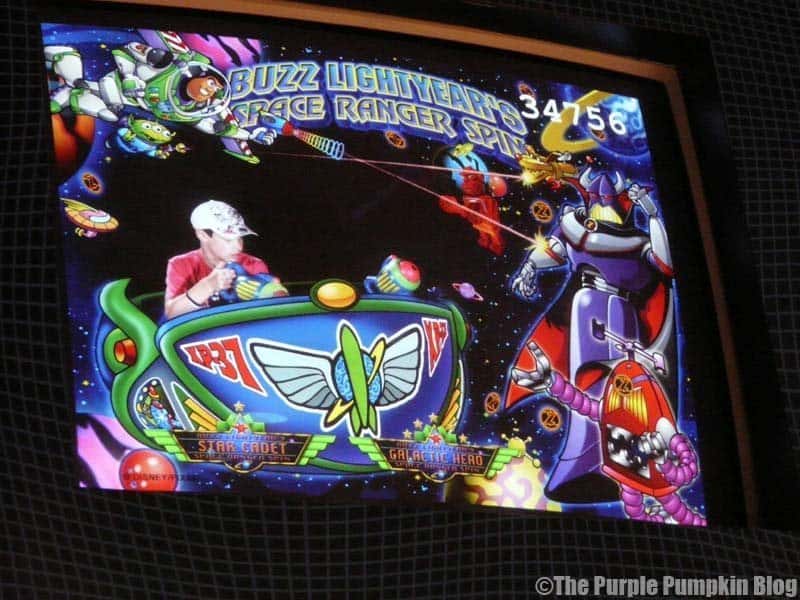 Edge into a shadowy foyer and climb aboard a gloomy Doom Buggy for a supernatural journey through a labyrinth of haunted chambers. Glide past a casket-filled conservatory, a chilling séance room and a ghostly graveyard of singing specters as you attempt to find your way out. Once an abandoned residence in the center of Liberty Square, the Mansion has been home to 999 unearthly specters since October 1, 1971, including: The Ghost Host, Madame Leota and the Hitchhiking Ghosts. The Haunted Mansion contains some mildly frightening subject matter. But there is no gore, the ghostly residents are friendly and the experience is appropriate for all ages. – Walt Disney World

This is such a great dark ride – one of my personal favourites. There is so much to look at as you travel around, and some great feats of Imagineering too. Check yourself as you leave to make sure that you’ve not picked up a Hitchhiking Ghost on the way out!

Sing along to the classic anthem of world peace during a delightful musical boat tour hosted by the children of the world. From a colorful dock, climb aboard a cozy boat and set sail along the Seven Seaways Waterway on a 10-minute journey. “it’s a small world” was created for the 1964-1965 New York World’s Fair. Personally overseen by Walt Disney in support of the United Nations Children’s Fund (UNICEF), the attraction was a huge hit for 2 seasons at the fair and was eventually shipped back to Disneyland park, where it reopened on May 28, 1966. In 1971, “it’s a small world” was recreated to become one of the Opening Day attractions at Walt Disney World Resort. Due to its immense popularity, the attraction has been replicated in every Disney Resort around the world and is considered a Walt Disney classic. – Walt Disney World

Okay, so I do have to drag my husband and son onto this one – this is the one ride that is like Marmite for many – you either love it or hate it! For me, it’s the classic Disney ride, with the annoying catchy theme tune that you’ll be singing for the rest of the day. And yes, a lot of the dolls are a bit creepy, but it’s a pleasant little ride, and I can’t visit Magic Kingdom without going on it!

Disney magic meets Disney music in this spectacular 12-minute 3D fantasy adventure starring Donald Duck. As the lights dim, Donald Duck is fast asleep. Mickey Mouse appears with music in hand and wakes Donald before rushing offstage to ready the show. As Donald prepares the orchestra for Mickey, he comes across the conductor’s baton and decides to work a little magic by donning Mickey’s Sorcerer’s Hat. But things get out of control fast and Donald is unexpectedly plunged into a 3D dream world of classic Disney animated musical sequences. Immerse yourself in the wonder of Disney animation thanks to a 150 foot-wide wraparound screen—and the magic of 3D. As the show begins, the Fantasyland Concert Hall magically disappears and your larger-than-life, almost 180‑degree 3D journey with Donald Duck takes flight. – Walt Disney World

What is so amazing about this attraction is that feeling that you are moving, thanks to the enormous, wrap around screens. You really do feel like you are flying on the Magic Carpet with Donald Duck. It features classic Disney songs, and make sure you look behind you at the end of the show!

Pirates of the Caribbean

Take off on a treacherous voyage to the 17th century, when rowdy rogues and rapscallions ruled seaport towns along the Spanish Main under the watchful eye of “Jolly Roger.” You’ll see the Pirates Grotto, The Fort, Town Square, Burning City and The Dungeon. Behold boisterous buccaneers drunk on the spoils of plunderin’ during a 9-minute cruise amid the Old World. And even spy a sly Captain Jack Sparrow from The Pirates of the Caribbean film series along the way! – Walt Disney World

Another Disney classic ride, and as fans of the films (which were spawned from this ride), it is a must do. The drop isn’t as big as the one at Disneyland Paris, but we don’t ride it for the drop, we ride it for the pirates, and to sing along:  “Yo Ho, Yo Ho (A Pirate’s Life for Me).”

Glide along a colorful bayou in a hollow log—past delightful singing critters—to a thrilling 5-story splashdown. Based on the 1946 Disney classic Song of the South, Splash Mountain tells the bumbling yarn of crafty Br’er Rabbit. After leaving his home in briar patch, Br’er Rabbit embarks on a quest for adventure, fortune and his “laughing place,” while trying to outwit Br’er Bear and Br’er Fox who want to eat him. This attraction includes 950,000 gallons of water, 3 dips and a 5-story waterfall. Where you’re seated will determine how wet you’ll likely get. Riders in the back may just experience a sudden splash or spray; those who opt for the front can expect to get soaked. – Walt Disney World

Don’t be fooled by the cute critters along the way – the final drop is HUGE! This is such a great ride, and as a family, I’d say it is our favourite at Magic Kingdom – and it’s fun to do a stupid pose for the ride photo!

Embark on a 10-minute tour of Tomorrowland aboard this emission-free mass transit system of the future. Take off from Rockettower Plaza for an elevated ride into the world of tomorrow. Ascend a conveyor belt to an open-air loading dock and board a moving tram for a leisurely outdoor and indoor voyage through Tomorrowland – go behind the scenes of Space Mountain and Buzz Lightyear’s Space Ranger Spin. With no engine, the Tomorrowland Transit Authority PeopleMover uses emission-free linear induction motors. This means the tram accelerates magnetically, so it’s better for the environment than a standard engine. – Walt Disney World

This is a great ride for taking some time off your feet, and to get a very unique view around Tomorrowland. I think every time we have ridden it, it has broken down, I don’t know if that is part of the ride or what, but it always seems to happen!

Discover how industrial advances over the past century have changed everyday living for an American family. Look back to the past and get a glimpse of the future at Walt Disney’s Carousel of Progress, a fascinating 21-minute Audio-Animatronics stage show celebrating the evolution of technology throughout the 20th century and today. Presented inside a revolving theater, the show includes an innovative audience seating area that rotates around a stationary central stage from act to act like a carousel. Walt Disney’s Carousel of Progress was personally created by Walt Disney for the 1964-65 New York World’s Fair. Featuring state-of-the-art Audio-Animatronics—Walt Disney’s latest animation technology at the time—the show was originally conceived as part of a new area at Disneyland park called Edison Square. When the concept was abandoned, the idea was re-imagined, eventually opening under the name “Progressland” at the 1964-65 New York World’s Fair. – Walt Disney World

Sing along with a lively menagerie of exotic birds, flowers and Tikis in this jubilant Disney classic. A feast for your eyes and ears, this theater-in-the-round attraction invites all to experience the exotic beauty and magic of the Pacific Islands.Walt Disney’s Enchanted Tiki Room—which debuted in 1963 at Disneyland Park—is the first Audio-Animatronics show. Walt Disney’s fascination with translating his love of animation into the real world led to the groundbreaking new technology, which enabled the synchronization of movement, audio and visual effects of a multitude of animated figures at one time. This technology helped pave the way for other classic attractions, including “it’s a small world,” “Pirates of the Caribbean,” and “The Haunted Mansion.” – Walt Disney World