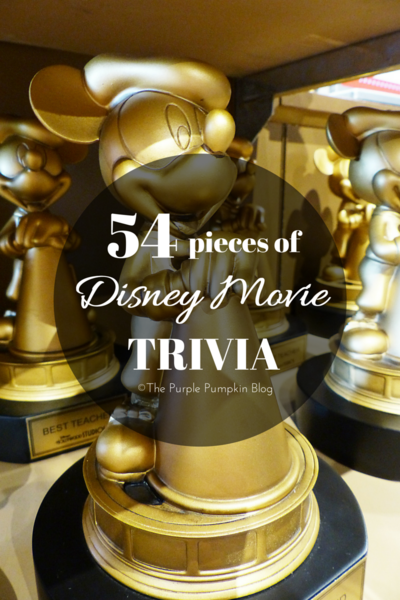 Another weekend where we are away, so rather than a post about one of my favourite Disney Movies, I’ve compiled a list of Disney movie trivia – one for each of the 54 Disney Animated Classics. I love movie trivia, and it’s only natural I would love Disney movies trivia! The hardest part of this post was picking just one for each film! 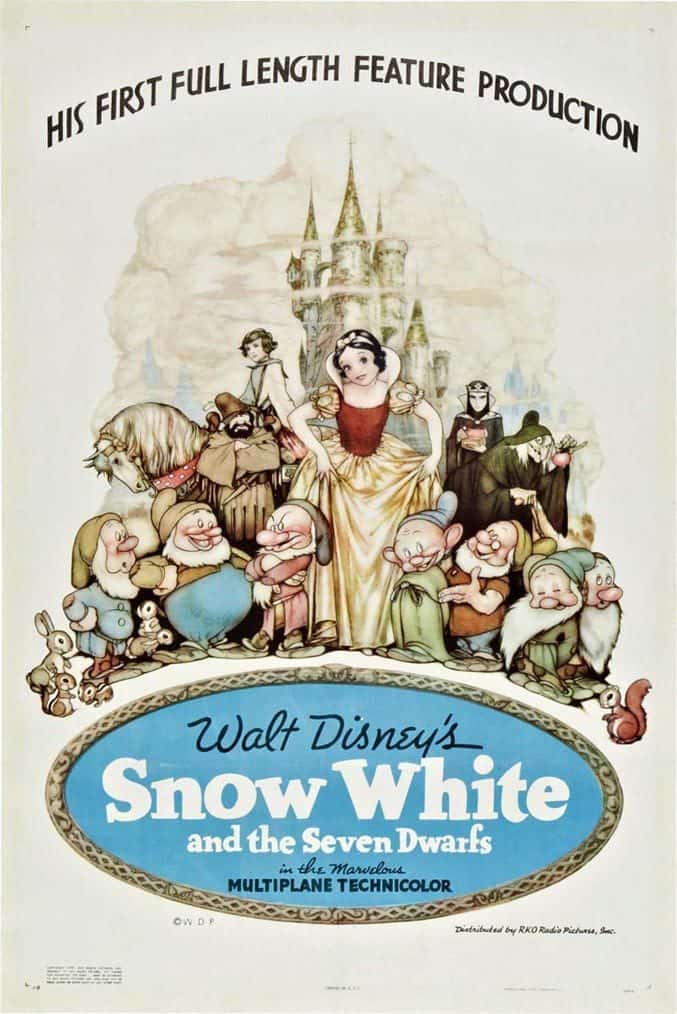 
3. Fantasia (November 13, 1940)
The first American film to use stereophonic sound as well as the first and only film recorded in Fantasound.

4. Dumbo (October 23, 1941)
During production there was a long and bitter animators strike, in which half of the studio’s staff walked out. Some of the strikers are caricatured as the clowns who go to “hit the big boss for a raise”.

5. Bambi (August 12, 1942)
The last full-length animated feature made by Walt Disney until Cinderella (1950). The gap was due to the lack of film workers (who were in military service) and materials necessary to make films when WWII was going on.

6. Saludos Amigos (August 24, 1942)
This was the first Disney Animated feature to be shown in South America before it was screened in the USA.

8. Make Mine Music (April 20, 1946)
One of Disney’s four “Package Films”. During the Second World War, the studio lost a lot of manpower and resources which left them with countless unfinished ideas too long for shorts, too short for features. So, inventive as they are, they stuck short ideas together into feature length movies. The other three were The Adventures of Ichabod and Mr. Toad (1949), Melody Time (1948) and Fun & Fancy Free (1947).

9. Fun and Fancy Free (September 27, 1947)
This was the last time that Walt Disney did the voice of Mickey Mouse. Much of it was recorded in the spring and summer of 1941.

10. Melody Time (May 27, 1948)
Because of the controversy about smoking, the “Pecos Bill” segment was heavily edited for release to DVD.

11. The Adventures of Ichabod and Mr. Toad (October 5, 1949)
During the live-action sequences in the library, the narrator mentions King Arthur and Robin Hood among other stories. Disney would eventually make these two with The Sword in the Stone (1963) and Robin Hood (1973).

12. Cinderella (March 4, 1950)
Cinderella actually loses a shoe three times in the film: first, when she delivers the breakfast trays (causing Lucifer to look under the wrong cup); second, when she is running from the ball; and third, walking down the steps with the prince.

13. Alice in Wonderland (July 26, 1951)
This movie is actually a combination of Lewis Carroll’s two “Alice” books, “Alice’s Adventures in Wonderland” and “Through the Looking Glass”.

14. Peter Pan (February 5, 1953)
Though the film was extremely successful, Walt Disney himself was dissatisfied with the finished product, feeling that the character of Peter Pan was cold and unlikable. However, experts on J.M. Barrie praise this as a success, as they insist that Pan was originally written to be a heartless sociopath.

15. Lady and the Tramp( June 16, 1955)
Walt Disney originally didn’t want to include the ‘Bella Note’ spaghetti-eating scene, now one of the most iconic moments in the whole Disney canon.

16. Sleeping Beauty (January 29, 1959)
The running gag where two of the fairies argued about what color Princess Aurora’s dress should be (pink or blue) comes from the filmmaker’s problem as to deciding just that.

17. One Hundred and One Dalmatians (January 25, 1961)
Xerox was a crucial help in the animation of hundreds of spotted dogs. Disney was able to bring the movie in for about half the cost thanks to this process.

19. The Jungle Book (October 18, 1967)
Walt Disney died during production of this film. Many people wondered at what the studio’s fate would be, particularly the animation division. The film performed extremely well at the box office, ensuring that the animators would not be put out of work. Had the film failed, it is likely that animation would have been closed down at the Disney studio.

20. The Aristocats (December 24, 1970)
The Aristocats was inspired by the true story of a Parisian family of cats, circa 1910, that inherited a fabulous fortune.

21. Robin Hood (November 8, 1973)
The famous gap on Terry-Thomas’ teeth was incorporated into the design of the character he voices, Sir Hiss (it makes a handy opening for his forked tongue to dart out).

23. The Rescuers (June 22, 1977)
This was the first Walt Disney animated feature to inspire a sequel.

24. The Fox and the Hound (July 10, 1981)
An uncredited Tim Burton did the character animation for the charterer Vixey. She was so different from the dark and Gothic-loving Burton’s style that he initially only animated her with distant shots; the closeup of her was done when Burton “grew to like her.”

25. The Black Cauldron (July 24, 1985)
The first Disney animated feature to not contain any songs, neither performed by characters or in the background.

26. The Great Mouse Detective (July 2, 1986)
Production took only one year to complete thanks to the use of computers.

27. Oliver & Company (November 13, 1988)
Dom DeLuise had already had roles in several other animated films by this point, but this was the only time he got the chance to voice a character in a Disney film. He loved the role so much, he kept ad-libbing lines that ended up being included in the film.

28. The Little Mermaid (November 15, 1989)
In the opening scene when King Triton arrives at the arena, you can briefly see Mickey Mouse, Goofy, Donald Duck and Kermit the Frog in the crowd of sea-people as mermen when he passes over them.

29. The Rescuers Down Under (November 16, 1990)
The least successful film released during the Disney Renaissance.

30. Beauty and the Beast (November 13, 1991)
The first Disney animated feature to have a pop version of the film’s main song play over the end credits.

32. The Lion King (June 15, 1994)
The wildebeest stampede took Disney’s CG department approximately three years to animate. A new computer program had to be written for the CG wildebeest stampede that allowed hundreds of computer generated animals to run but without colliding into each other.

33. Pocahontas (July 16, 1995)
The first animated Disney movie to have an interracial romance.

34. The Hunchback of Notre Dame (June 19, 1996)
The song “Hellfire” is considered one of the darkest songs written for a Disney film. It was nearly cut from the film.

35. Hercules (June 14, 1997)
While the movie is about Greek myths, Hercules is actually the protagonist’s Roman name. Heracles is his Greek name.

36. Mulan (June 5, 1998)
This was the last Disney Animated Feature film to contain Musical Elements after a Decade’s worth of Disney Animated Musicals (the only exception being The Rescuers Down Under in 1990), up until The Princess and the Frog in 2009.

37. Tarzan (June 12, 1999)
Phil Collins was chosen to provide the music as a deliberate move away from the Disney “showtune” formula.

38. Fantasia 2000 (December 17, 1999)
Unveiled just after the clock struck midnight on Dec 31st 1999, making it the first film to be released in the new millennium (pedantry over the date of the beginning of the millennium notwithstanding).

39. Dinosaur (May 19, 2000)
In order to separate this from the similar movie The Land Before Time (1988), the film was intended not to have any dialogue at all, but Michael Eisner of Disney insisted they include it.

40. The Emperor’s New Groove (December 15, 2000)
Patrick Warburton improvised when Kronk hummed his own theme song when he was carrying Kuzco in the bag to the waterfall. Disney legal department had Warburton to sign all rights to the humming composition over to them.

42. Lilo & Stitch (June 16, 2002)
Along with The Princess and the Frog (2009), this is one of only two films from the Walt Disney Animation Studios released in the 2000s to meet with critical praise and make its money back in its initial theatrical run.

44. Brother Bear (October 20, 2003)
The third and final film to be fully produced at Disney’s Orlando, Florida animation facility at the Walt Disney World Disney-MGM Theme Park (after Mulan (1998) and Lilo & Stitch (2002)). This studio was shut down in March 2004 in favor of computer animated features.

47. Meet the Robinsons (March 30, 2007)
When Wilbur is revealing his family, he says his dad (who is not pictured) looks like Tom Selleck. Tom Selleck indeed provides the voice for Wilbur’s Dad.

50. Tangled (November 24, 2010)
The descending lantern that Rapunzel lifted back skyward was the one her parents, the king and queen launched from the palace veranda. It was the only one with the royal symbol of the sun on it.

51. Winnie the Pooh (July 15, 2011)
This was the last film from Walt Disney Animation Studios where the characters were drawn by hand. Beginning with the next film Wreck-It Ralph (2012) (and other movies after that.) The studio now does computer animated films.

53. Frozen (November 27, 2013)
The characters of Hans, Kristof, Anna and Sven are all named after Hans Christian Andersen. Say the names quickly in sequence and hear the similarity.