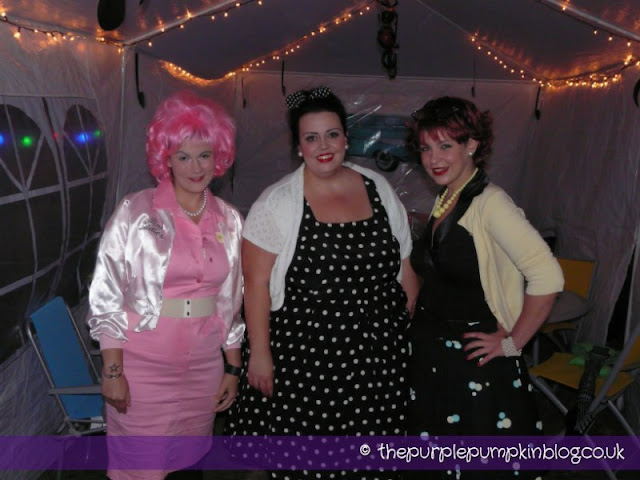 The idea popped in my head when my husband and I were discussing party themes, and since I love the 1950s, I ran with it!

I started looking towards American diner menus for food inspiration, and when we were out in Florida, we popped into Mel’s Drive In Diner at Universal Orlando which was like stepping into 50s America! The following few pictures are some that I took and from my Flickr. I designed some invitations before going on holiday and sent them out as I knew I wouldn’t have much time after we came back. I found a font called Fabulous 50s and found iconic 50s images to decorate with. I love the way it came out :)

As I said, I didn’t have much time after coming home from our holiday to my actual birthday party, so it was a bit of a rush job when it came to decorating. I found a load of 50s decorations online from various party stores so bought up enough to decorate my house with.

There were records on streamers, pink and black balloons, cutouts, plastic wall coverings, mini juke boxes and blow up guitars, mics, and saxaphones!

I am usually quite lucky when it comes to the British weather for my birthday – September can often be lovely, but typically, this day was horrid! We’d set the gazebo out in the garden, as our house was a little bit too small for 30+ guests and it would serve as an extended party space…but it was so cold, wet and windy, only my siblings and I braved it!

I decorated the gazebo with outdoor fairy lights, musical notes, some 50s car wall coverings and the blow up instruments….such a shame that it was a washout though :(

I had bought a bunch of mini jukeboxes that I placed on each table and surrounded them with tealights.

I made my own birthday cake – a giant cupcake! My husband bought me a giant cupcake tin for my birthday (which was actually a few days before my party) so I put that to use for the first time ^_^

I used a tried and trusted madeira cake recipe, covered the ‘case’ bit with pink sugarpaste and white polka dots, and then butter cream was swirled over the top with sprinkles thrown on!

Originally, for the food I thought of American diner fare – hot dogs, hamburgers, fires, onion rings, chilli…but realised that with my small kitchen (where I would also be serving food from) and for the amount of guests, this was probably not too clever an idea, so instead I went with some classic sandwich fillings and salads. Then another twist…making sandwiches and salads for that amount of people and keeping everything cold in the fridge was also a logistical nightmare! So I de-constructed everything (that’s the twist!) – allowing people to make their own salads and sandwiches and having a ‘Sandwich Station’ and a ‘Salad Bar’

I’m kicking myself at the moment as I seem to have deleted the images of the posters that I made for these, which isn’t like me at all…but luckily, I did keep the posters that I printed off and laminated, so I’ve taken a couple of snaps just now on my iPhone to show you what I designed. I took some inspiration from the signs I saw up in the diner in Universal Orlando.

I made a coleslaw and potato salad (Didn’t buy it ready made! I told you I *do* do this sometimes!) and then had bowls of the ingredients for each salad – Caesar and Cobb – for people to make as they wished – lettuce, parmesan cheese, croutons and Caesar dressing; lettuce, chicken, avocado, tomato, hard boiled egg, bacon and ranch dressing.

The sandwich fillings were BLT, tuna & sweetcorn, pastrami, egg mayonnaise, salt beef and ham & Swiss. I laid out bowls of the ingredients – along with accompaniments – tomatoes, lettuce, pickles, mayo, mustard and relish, and also rye bread and bagels that I bought from a local Jewish deli.

The food went down really well, and I would do this sort of thing again in a heartbeat – so much easier and quicker to prepare and store tubs of ingredients (that can then easily be re-used if there are leftovers) than making lots of individual sandwiches!

To hide the hideousness that is my kitchen wall, I bought a 50s diner wall covering, which my husband, painstakingly covered every part of the kitchen walls with! I put the signs up on the unit doors along with other cardboard cutouts that I had bought to decorate with. I had some musical notes confetti that got scattered around the bowls.

I had planned on doing an ‘Ice Cream Sundae’ bar, but that didn’t materialise, so instead, I bought a hella load of cake! Chocolate Fudge, New York Cheesecake, Apple Pie, Carrot Cake, Lemon Meringue Pie…and I also put out ice-cream with toppings!

Haha – one cheesecake was stored in the sink until I could clear the savoury food to put everything out!

And because it was a fancy dress party – everyone dressed up 50s style! LOVED IT! Everyone really made the effort!

Everyone really enjoyed the party – the food, the music (I had downloaded lots of 50s songs), the decoration and the atmosphere…which always makes me happy to know that my guests had a fab time…and I ended up having a great 35th birthday!