Day 16 of WDW-40, the latest of my Disney Trip Reports, is here! I bet you thought I’d forgotten all about it hadn’t you? This particular trip report has taken me so long to write that we’ve actaully had another Walt Disney World holiday! A lot was going on in my personal life, and writing about our Disney trip in 2016 fell to the bottom of the pile.

But I do not like to have my trip reports left unfinished, so I am going to power through and get the final 15 days written. As for my 2017 report that will follow as soon as humanly possible!

Right! Back to today! On Day 16 I wasn’t feeling very well – I had started to lose my voice last night at Mickey’s Not-So-Scary Halloween Party – and by this morning was aching all over, and generally felt really rough. I was not a happy bunny! I did drag myself out later in the afternoon to Disney Springs for some fresh air, but it was a slow day all around! 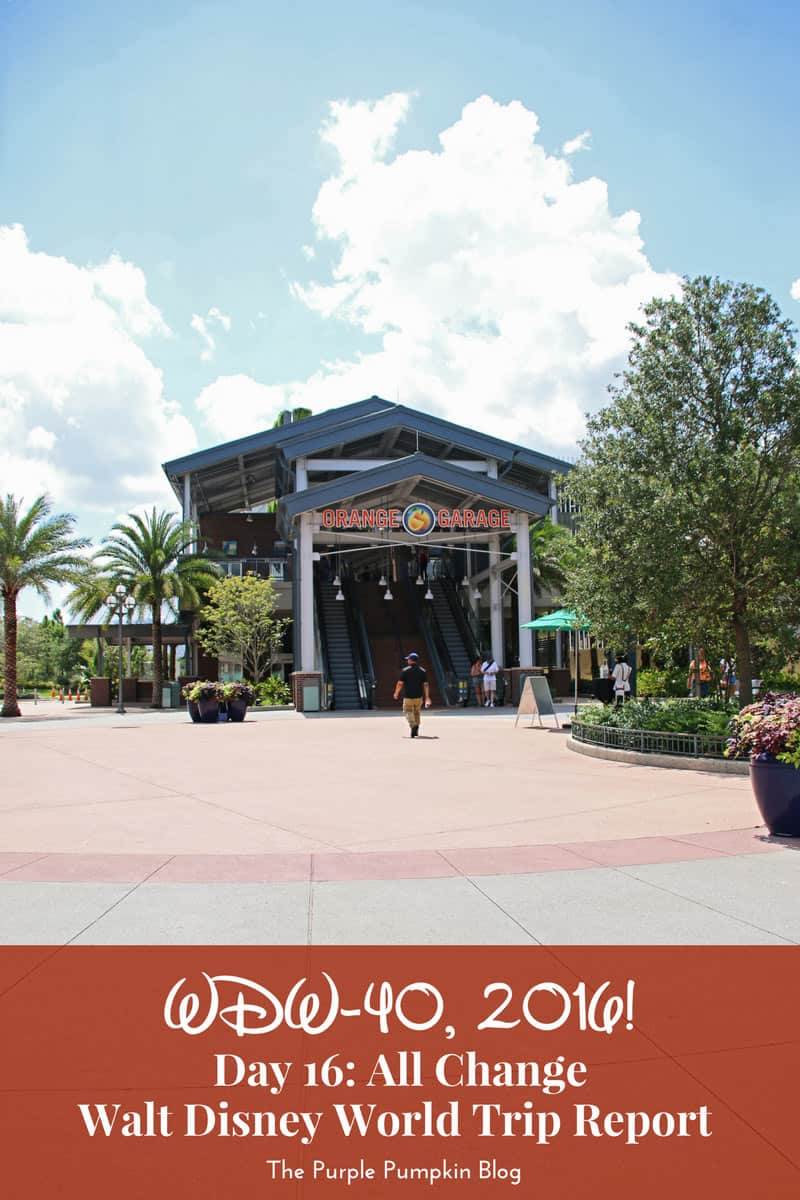 Dinner at Bahama Breeze
September 19th, 2016
My trip reports are generally photo heavy, images in tiled galleries can be clicked on to enlarge. All the photos from this day can be found here | Florida 2016 photo collection on Flickr here.
WDW-40, 2016: Trip Report Index | Pre-Trip Planning Report
Some days are split into several parts; please use the page numbers at the bottom of the post to continue reading.

There is nothing worse than feeling poorly when on holiday. I was losing my voice last night, which wasn’t a good sign, and woke up so groggy this morning. We were due to go to Universal Studios today with my brother and his girlfriend (who is now his wife, since I’ve taken forever to write this!) but I had to drop them a text to say I wasn’t up for it, and would catch up with them later, or potentially in a couple of days.

We had been picking them up in our car from their resort – All-Stars Movies – and they didn’t have a car. However, it kicked my bro up the backside and he went and hired one for a few days. This was good for us as it meant I didn’t have to feel pressured into driving them around when I was sick, and it meant we could all spend some time doing our own thing!

After lying in bed for the morning, feeling sorry for myself, hubby suggested that maybe being out in the sunshine would do me some good. I was inclined to agree with him. The rooms in Poly (and in general at the Walt Disney World Resorts we have stayed at before) are quite dark and being cooped up in a hotel room is not much fun.

Other than our very first day where Steve quickly dashed into Disney Springs to buy our Tables in Wonderland card, we hadn’t seen the “new” Disney Springs yet, so that is where we headed to. It felt really weird as all the roads had changed, and the Orange and Lime parking garages were now open too. We parked in the “old parking area” and made our way through what I can only now describe as old Disney Springs – because all of the re-imagined, and new areas look amazing in comparison!

At the time of our visit, Disney Quest was still open – it’s now closed. The Characters in Flight balloon was still red and yellow – it’s now two shades of blue! And we STILL haven’t ridden on it! Even after our 2017 trip… Seriously, next time we go, I want to make it a priority on our first day!

We popped into Candy Cauldron to look at the candy apples, with a mental note to buy one on the way back to the car (we forgot). We also looked in the LEGO store and reeled in shock at the price of the Cinderella Castle set… which Steve actually ended up buying for me that Christmas! And which I still haven’t put together because I want to get a showcase for it to protect it from dust!

We of course had to go into Disney’s Days of Christmas so that I could buy some new ornaments for the tree. It’s always one of my shopping highlights! They had a lot of Jack Skellington, and The Nightmare Before Christmas merch this year, which pleased me immensely!  I spent a small fortune on Christmas ornaments this year… I also made a video showcasing them all – scroll down past the photos to watch it!

We visited the new Coca-Cola store, which is in the Town Center, and a huge 3 storey building that sells pretty much anything and everything you could think of with a Coca-Cola design on it! There were even things made out of old Coke cans. I actually love the branding design of Coca-Cola so it was a very cool shop to look inside. We bought a few gifts for Liam (my son who wasn’t with us on this trip), and a few things for us too.

You totally know I bought some Coca-Cola ornaments! As soon as the Holidays Are Coming advert comes on TV I declare that Christmas has officially started! I have to say that all the glassware made me very nervous. Keep your kids close at hand, and watch when you turn around if you’re holding bags on your shoulder- eek!

The different Coca-Cola bottles were really cool. You could buy them singularly, or as a pack of 6. We bought a variety of bottles to bring home for my son.

On the third floor is the Rooftop Beverage Bar where you can buy all manner of Coca-Cola products – so not only Coke itself but all the variations like Diet, Zero Sugar, Cherry, Vanilla; and other products like Sprite, and Fanta. You can buy the drinks from the soda fountain, and in various sized bottles and cans, as well as turn them into floats.  Check out All-Ears (who are amazing for having menus for all establishments across Walt Disney World Resort!) for the full menu of what you can buy.

We decided to order the Tastes of the World – Enjoy sixteen sparkling and still beverages from around the world; International Tray – $9.00.

It looks like we bought a cup of drink to-go as well. I can’t remember what it was now though. I am sure the card that you can see in the photo told us what each one was – I do still have that card tucked away somewhere, so I will dig it out and update this post with what each one was! I know some where a lot nicer than others, and some were downright blergh!