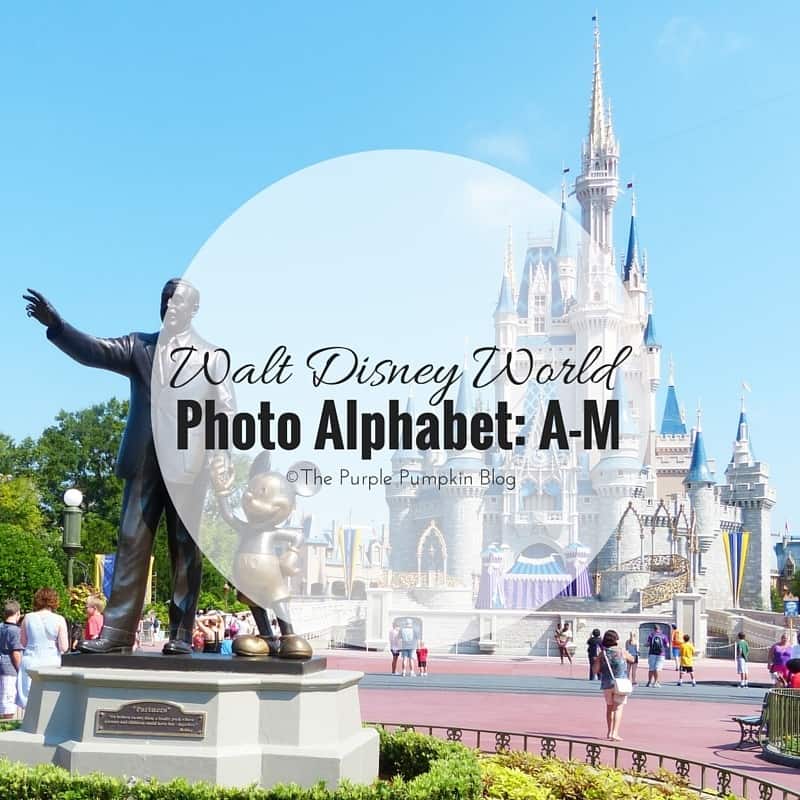 I thought it would be fun to compile a Walt Disney World Alphabet, using photos from our trips to the World. This post covers letters A through M, and the rest will follow next week!

Disney’s Animal Kingdom Theme Park is the fourth of four theme parks built at the Walt Disney World Resort in Bay Lake, Florida, southwest of Orlando. It was dedicated and opened to the public on Earth Day, April 22, 1998. It is the second largest theme park in the world, and it is the largest Disney theme park in the world, covering 500 acres (200 ha). It holds the distinction of being the first (and only) Disney park to be themed entirely around animal conservation, a philosophy once pioneered by Walt Disney himself. 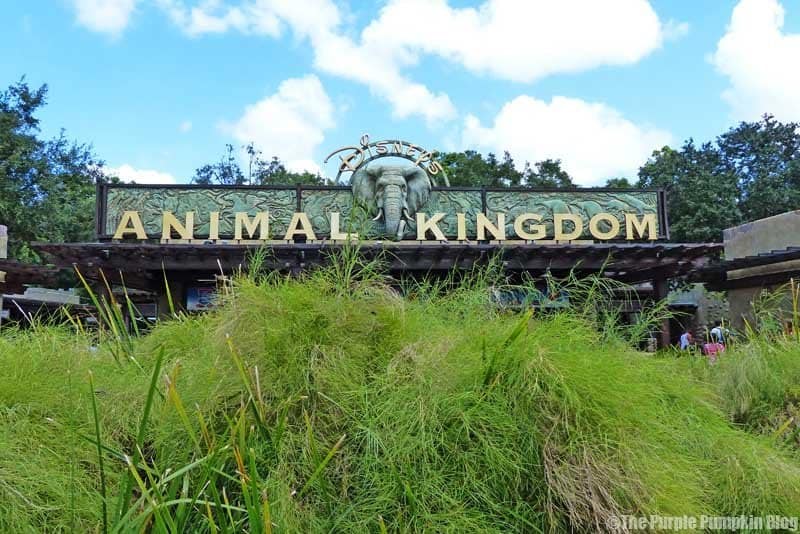 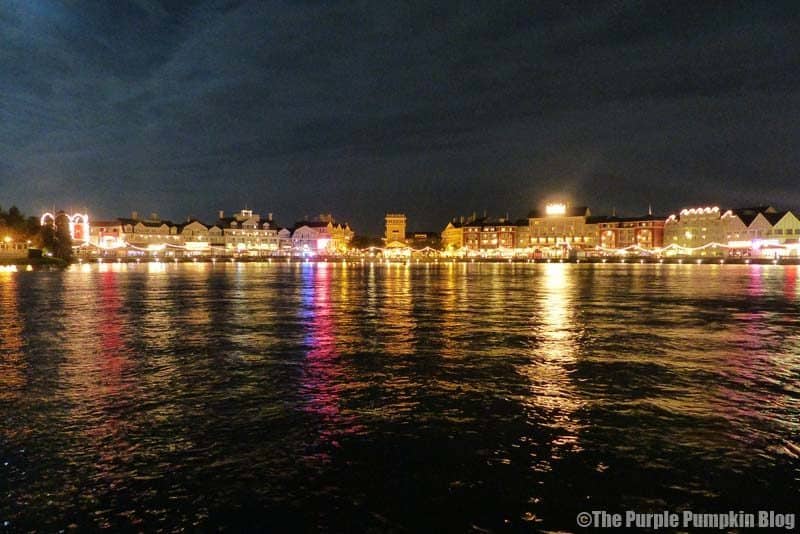 Cinderella Castle is the fairy tale castle at the center of two Disney theme parks: the Magic Kingdom at the Walt Disney World Resort, and Tokyo Disneyland at the Tokyo Disney Resort. Both serve as worldwide recognized icons and the flagship attraction for their respective theme parks. Cinderella Castle was completed in July 1971, after about 18 months of construction. The castle is 189 feet (58 m) tall, as measured from the concrete bottom of the body of water, which itself is 6 feet (1.8 m) deep at the bridge. Cinderella Castle is more than 100 feet (30 m) taller than Sleeping Beauty Castle at Disneyland in Anaheim, California. An optical trick known as forced perspective makes the castle appear even larger than it actually is.

D – Dream Along With Mickey

Feel the excitement build as Minnie Mouse, Goofy and Donald Duck prepare for a big party where dreams come true! Twirling dancers in beautiful blue costumes bring the festivities to life in front of Cinderella Castle. When Mickey arrives, it’s time to celebrate. It also happens to be my favourite show at Walt Disney World!

A steel roller coaster at Disney’s Animal Kingdom theme park at the Walt Disney World Resort in Lake Buena Vista, Florida. The ride is themed around the Yeti hiding in Mount Everest. It is listed in the 2011 book of Guinness World Records as the most expensive roller coaster in the world. Including sets and extras, its total cost was reported to be US$100 million, following 6 years of planning and construction. It is the tallest artificial mountain in all of the Walt Disney Parks.

Celebrate the stories you love with a magical mix of floats, costumes and original music. Paying homage to the unbridled magic and vivid pageantry of Fantasyland and its many inhabitants, the Disney Festival of Fantasy Parade is a thrilling sight-and-sound spectacular that winds its way through the streets of Magic Kingdom park each afternoon.

The Germany Pavilion is part of the Epcot World Showcase. Its location is between the China and Italy pavilions. It is designed to look like a German town, but with architecture from different eras and regions. The Platz (square) is decorated with a statue of St. George and the Dragon inspired by the statue in the medieval Bavarian town of Rothenburg ob der Tauber, and a clock tower. The Biergarten, at the rear of the courtyard, sells traditional German food. The pavilion also has numerous small shops selling German goods, including dolls and cuckoo clocks. The area near the pavilion is decorated by an extensive model village with working model trains.

A Hidden Mickey is a representation of Mickey Mouse that has been inserted subtly into the design of a ride, attraction, or other location in a Disney theme park, Disney properties, movie or other Disney product. The most common Hidden Mickey is a formation of three circles that may be perceived as the silhouette of the head and ears of Mickey Mouse. Hiden Mickeys may be painted, made up of objects (such as rocks, or three plates on a table), and can take on many sizes and forms. This one below is on Living With The Land at Epcot.

I – IllumiNations: Reflections of Earth

IllumiNations: Reflections of Earth is a night time show performed nightly at Epcot. The show utilizes fireworks, pyrotechnics, laser lights, fountains, and fire to create a visual production on the park’s World Showcase Lagoon. It premiered on October 1, 1999 as IllumiNations 2000: Reflections of Earth as part of the Walt Disney World Millennium Celebration; it was so successful that after the celebration ended the 2000 was dropped from the name and the show was continued.

Embark on a cruise where hippos, elephants and maybe even a headhunter await your arrival. Trek to a forgotten tropical jungle outpost—home to suspended cargo nets, wooden crates and lanterns, and faded marquee signs—and board a canopied tramp steamer for a tongue-in-cheek adventure led by a trusty skipper through some of the world’s most treacherous rivers.

The legendary Kitchen Sink dessert at Beaches and Cream at Disney’s Beach Club Resort is a gargantuan bowl, (shaped like a kitchen sink!), overflowing with sugary treats:

L – Living With The Land

Gain a newfound appreciation for where your food comes from on this cruise through the living laboratories of Epcot. Many of your favorite foodstuffs—chocolate, coffee, vanilla, tomatoes and rice, to name a few—grow on trees, vines and now even in soil-less environments. See firsthand how Disney’s horticulturalists are using innovative growing techniques and cross-breeding high-yield crops with the goal of sustaining our growing global population.

Fun-loving and feisty, Tinker Bell orchestrates the magic, lighting the way with a wave of her wand. Half a million shimmering lights are carefully synchronized to a memorable soundtrack to create this moving musical spectacle which lasts over 20 electrifying minutes. Since 1972, this sparkling spectacle has been accompanied by a bouncy tune that will have you tapping your toes! Called the “Baroque Hoedown,” the tune was penned in 1967 by electronic music pioneers Jean-Jacques Perrey and Gershon Kingsley. The most recent arrangement features a richer sound produced in part by the latest innovations in audio technology.