You know about Cake Pops right? Those cute little cakes, on sticks…? No? Then head straight over to Bakerella which is where I first saw cake pops a couple of years ago. They are awesome!

As a last minute food on a stick dessert, I used marshmallows instead! And I think that they came out wicked! Sure, the photo is a bit out of focus, and yes, they could be more mushroomy-shaped…but…last minute people!! I was still dotting eyes on 2 minutes before people walked through the door ^_^

Now, go grab a bag of marshmallows and follow me! 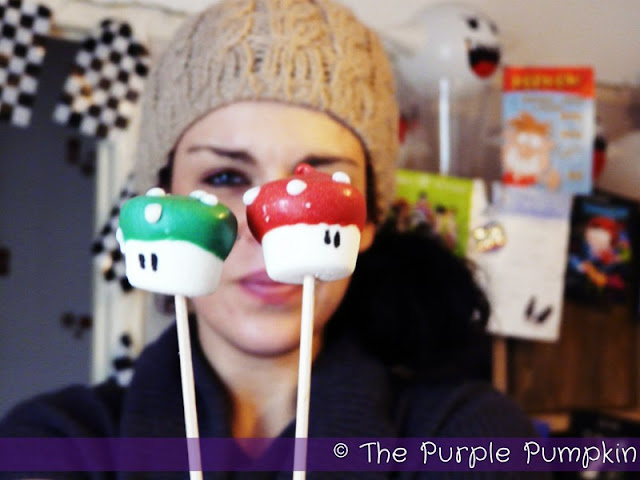 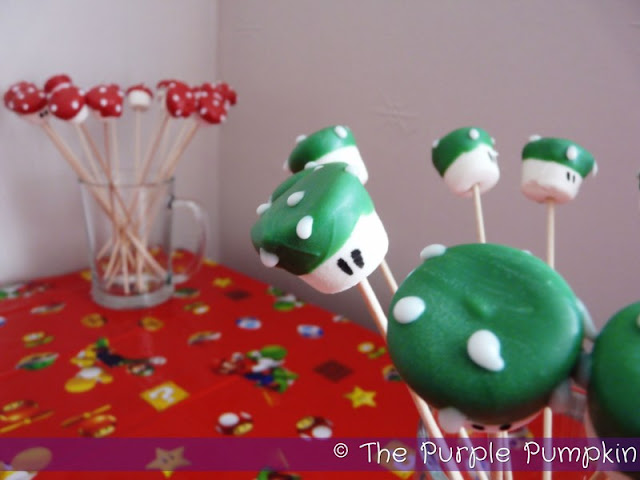 What do you need and how do you make these cute marshmallow pops?

You need a bag of large white marshmallows…I could only find bags of pink and white large marshmallows, so some of my Mario Mushrooms were blushing *^_^* You also need red and green Candy Melts. Candy Melts, by Wilton, are ready made coloured candy, which are easy to melt and less temperamental than chocolate. There are a variety of colours and I bought mine from HobbyCraft, but you can buy them online at places like Amazon and eBay. They are really easy to use and I’m so glad that I can buy them in the UK!

I used wooden skewers to impale my marshmallows, but you could also use lolly sticks – especially for young kids who might end up poking themselves with the pointy end >_<

To create the dots on the mushroom caps, I used a tube of ready-made white icing, but if you so happen to have some royal icing knocking about, then you can use that in a piping bag. For the eyes, I used a black food pen.

You will need somewhere to stand the marshmallow pops as they are drying off. My hubby found a box and pierced holes in the top to stand them in. In the past when making cake pops I’ve used a wedge of polystyrene.

First off, I stuck the skewer into the narrower end of the marshmallow and pushed it almost all the way through so that they would be on there nice and securely.

I then melted half a bag of red candy melts – way too much, so I think a quarter bag is fine. (You can re-use melted Candy Melts so if you do too much you don’t have to worry!) The instructions are on the bag – so easy! Just toss the melts into a microwaveable bowl and nuke for 1 minute and then in 30 second bursts until melted…as I wasn’t melting the whole bag, I just burst melted, just to be safe. I did the same with the green candy melts.

Taking one mallow on a stick at a time, I dunked it, wider top down into the melted candy. Some came out better than others for me – I tried to get a nice straight edge round the rim of the cap and try and dome it a bit at the top…trial and error! I found that the candy melts were pretty thick, so didn’t worry too much about them dripping.

I would say they take about 20 minutes to air dry, but I didn’t time it…sorry! When the caps are dried you can decorate with the white icing by piping dots all over them. The dots on the Super & 1-Up Mushrooms are quite big, so you could make bigger dots that I did on mine. But it’s all good ^_^

Then draw some lines for eyes…and job done!

These Mario Mushroom pops were easy and fun to make, really effective and make an awesome dessert on a stick!