Now that the nights are really closing in, and the temperature is dropping, the kind of meals I cook for the family tend to be comforting winter warmers, like casseroles, stews and soups. I also love to pull out the slow cooker and use that a lot more in the winter months than the summer.

A slow cooker is great for getting dinner ready early in the day when I have more energy – by 4pm, in the winter months, I’m normally falling asleep! I blame it on getting old and the skies getting dark so much earlier! It’s also lovely to walk into the smell of cooking food that’s been getting flavourful all day long – a wonderful end to the working day when all you want to do is relax.

My go-to recipes for a slow cooker tend to be casseroles made with joints of beef, as well as my tasty pulled pork. I don’t think to use it for anything else, (shameful, I know) so when I saw some Schwartz Slow Cookers Mixes in the supermarket I thought I’d buy a couple of them to make a chicken curry and a sausage and bean casserole. Time to break the habit of the same old same old in the slow cooker!

The Schwartz slow cookers recipe mixes are a really handy thing to have in your store cupboard as it takes all the seasoning guesswork out of the equation. All you need to worry about is the other ingredients, and with a bit of meal planning at the start of the week you’ll be knocking out delicious family meals with the least stress possible!

I made the chicken curry on Friday night for dinner. I had the choice, according to the recipe, to cook in my slow cooker on high for four hours, or on low for eight hours. As I was having a quiet day with my mum popping over to see me, I decided to put it on early afternoon, ready for dinner at around 6:30 when hubs comes home from work. 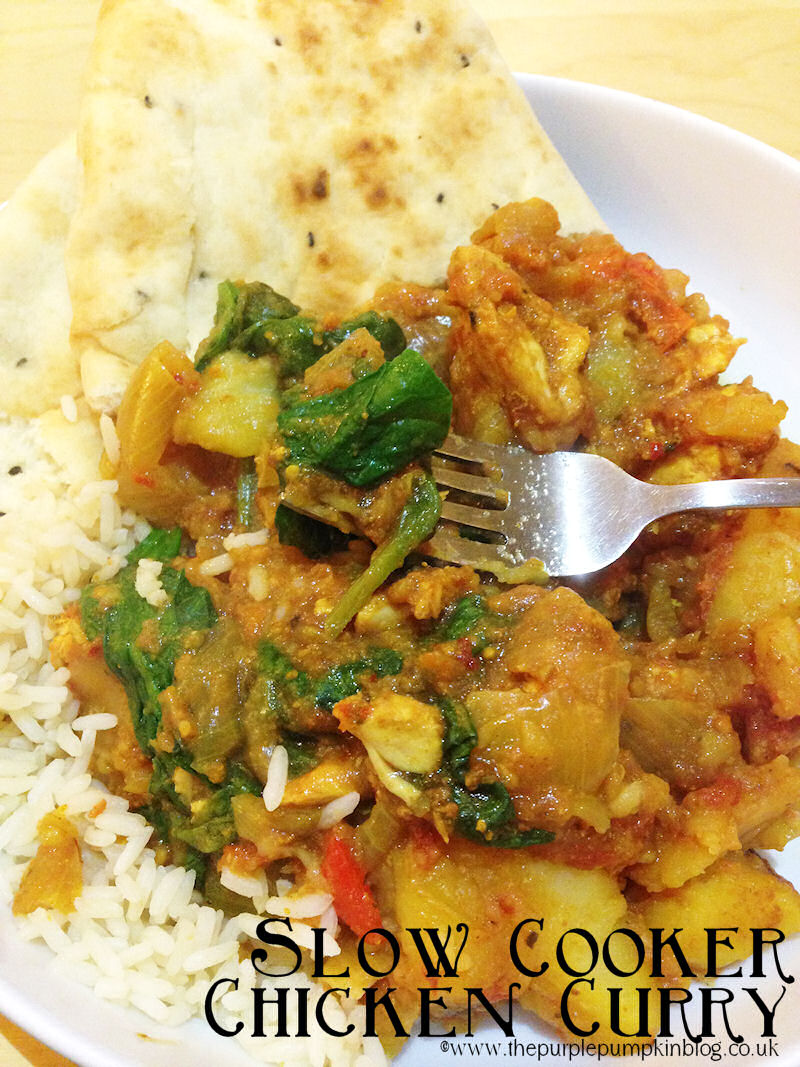 All I had to do was chop the chicken into bite size pieces (don’t panic about the date on the chicken, it had been in the freezer!), chop the onion, potato and pepper and then stir the slow cooker spice mix into the can of tomatoes. Everything went into the slow cooker, bar the spinach, which I added five minutes before serving.

The smell of the curry mix when I opened the pack was amazing – really a feast for the ‘strills! And as the aroma from the curry wafted around the house, my son, who came home from school late afternoon said how good it smelled! I cooked a little rice to go with it, as we always seem to eat curry and rice; however, it really isn’t needed – the potatoes really pad this curry out, and it would be fine with either some poppadoms or some naan bread on the side. 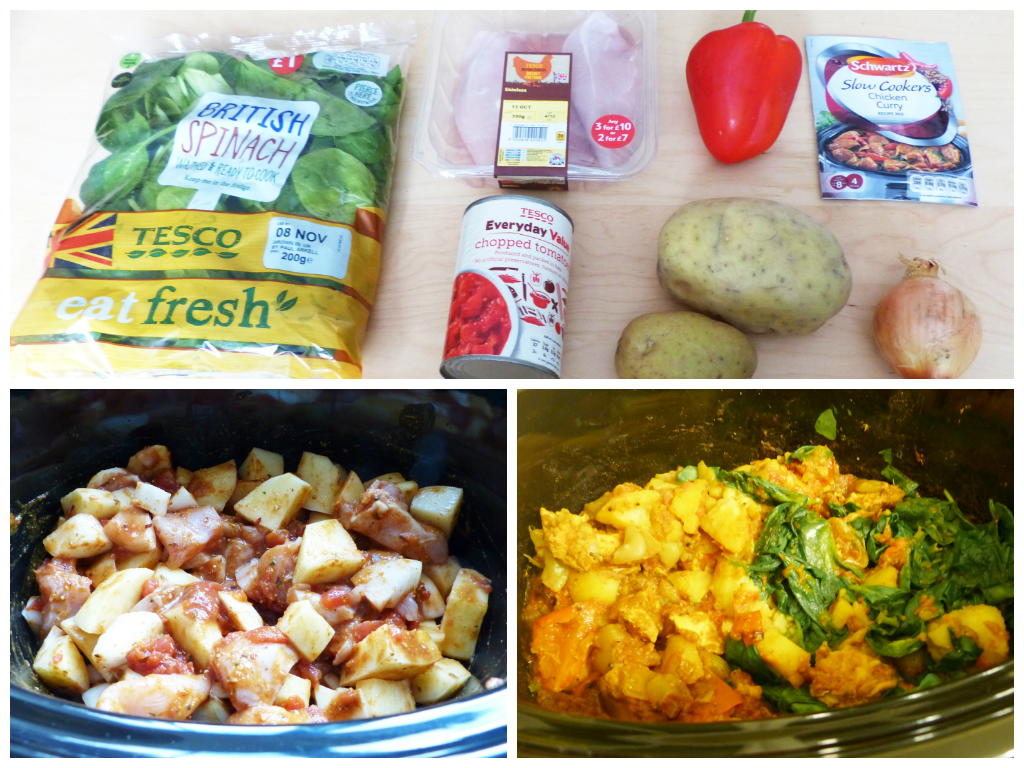 The verdict on the Schwartz Slow Cooker Chicken Curry was a big thumbs up from my boys, and from me! The potatoes tasted more flavoured than the chicken, and I reckon you could easily use this mix just on vegetables and have a really yummy veggie curry. Hubby’s only complaint was that the curry didn’t have much sauce for mopping up with his bread…that could be countered by adding a little more water to make more of a sauce.

For Saturday night’s dinner it was a family favourite of sausage casserole with mash. I browned the sausages off a little bit first before popping into the slow cooker, on high for 4 hours (or low for 8 hours), with cannellini beans and onions. The casserole mix was stirred into tinned tomatoes with some water and tomato purée before being poured over the other ingredients. 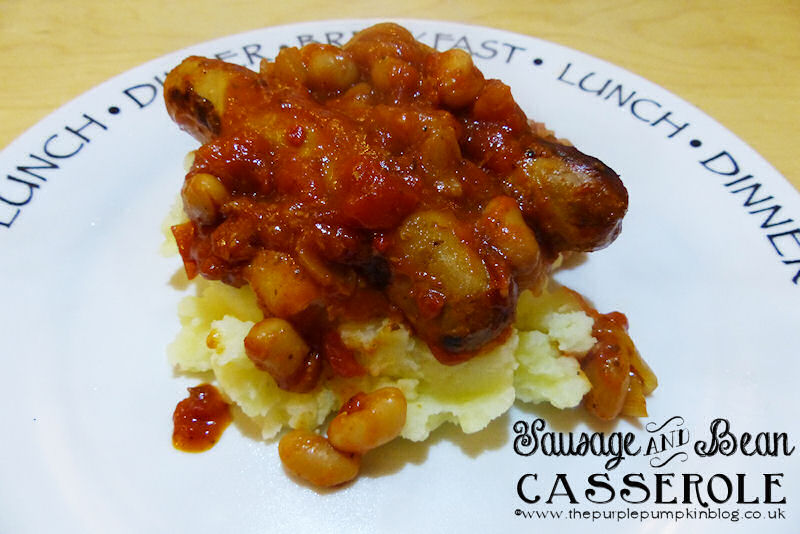 Again, please ignore the date on the sausages – we freeze a lot of food!! The ingredients are things you may well already have in the cupboard, and if you didn’t have the cannellini beans, I am pretty sure it wouldn’t hurt to throw in a tin of baked beans instead! I cooked up some potatoes to make mash – you can’t have bangers without mash!

After the complaint from hubs about lack of sauce yesterday, I added a little extra water to make sure there was enough to satisfy him!! The Schwartz Slow Cooker Sausage and Bean Casserole was another hit with the family. The boy doesn’t particularly like beans, so he pushed them to one side, but hubs and I really enjoyed them – the flavours from the packet mix made them taste delish! 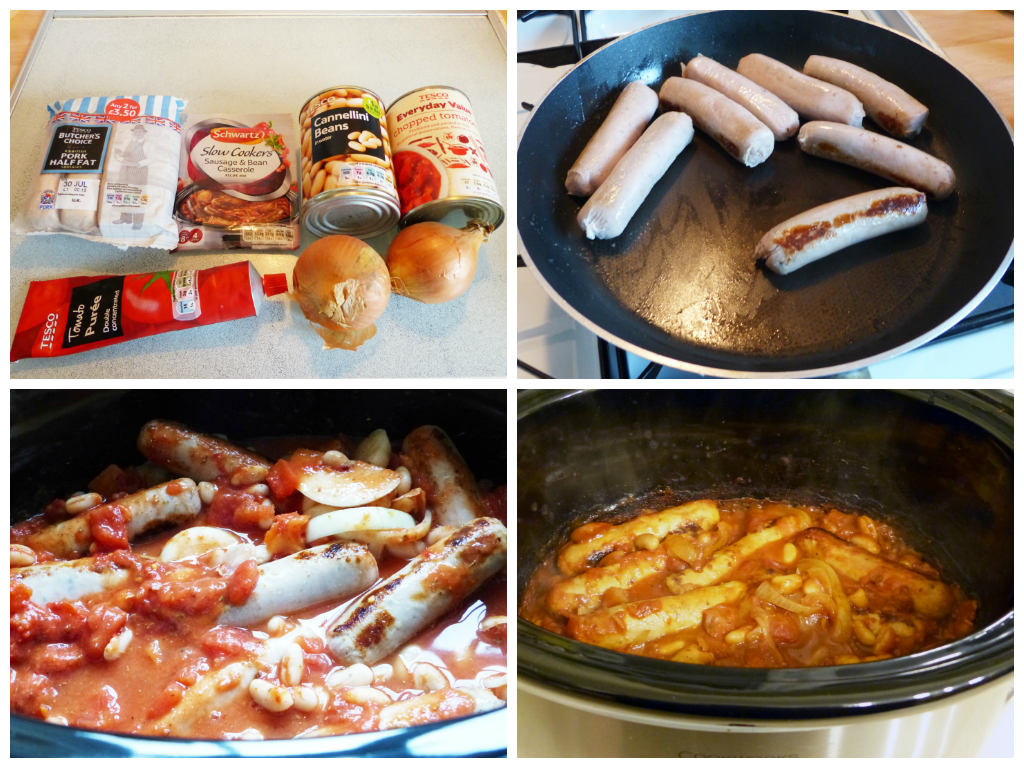 Out of the two mixes, we preferred the sausage casserole, but they were both really tasty, and to make two dinners with the minimum of fuss is a big plus in my book! Schwartz have another two slow cooker mixes available – beef and tomato casserole and chicken in red wine which I think we’ll have to give a try in the coming weeks!

Established in 1889, Schwartz is a trusted brand of spices, herbs and flavourings. These days, their range of quality products also extends to gravies, sauces, and more. Visit their website at www.schwartz.co.uk to see their wide variety of recipe suggestions and meal ideas, and share your own tips by joining the Schwartz Cooking Club.

Disclosure: This post was inspired by Schwartz. All opinions are my own.