Review of the Year 2014 – October to December 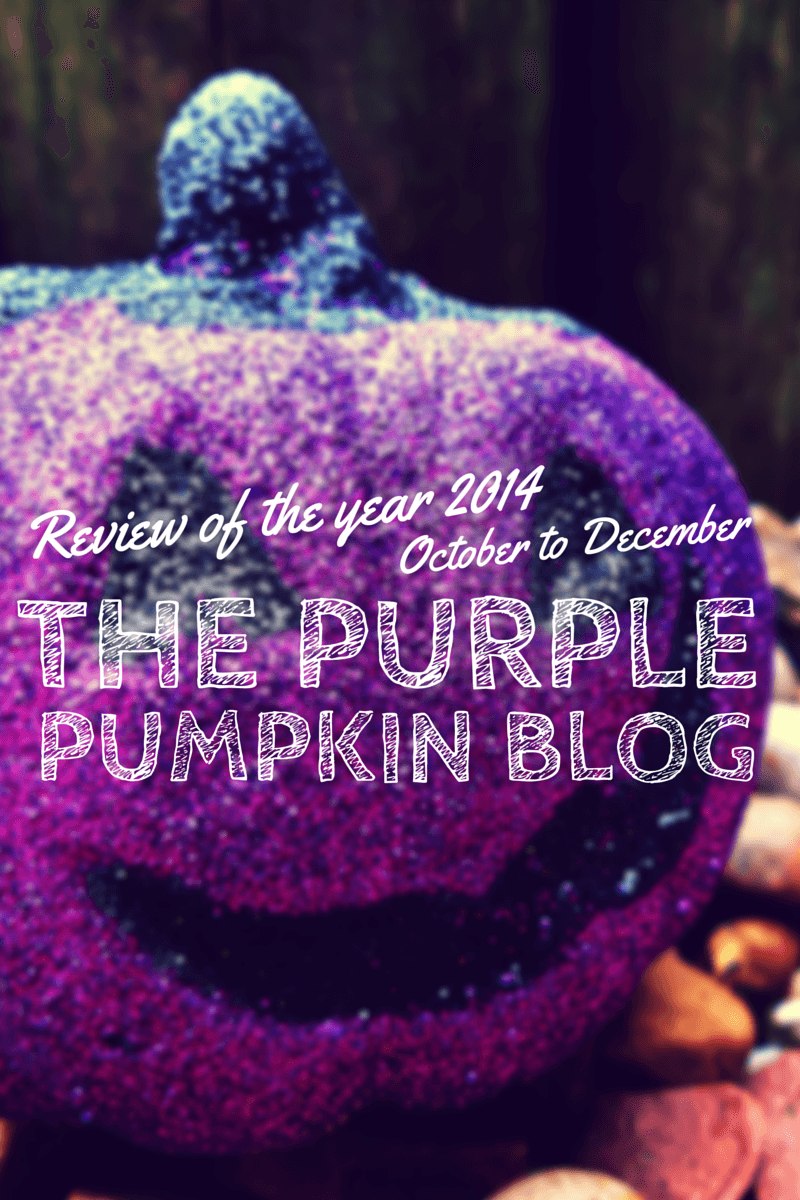 October means one thing on The Purple Pumpkin Blog – Crafty October! An annual series where I share all my ideas for Halloween. My first photo for October was day 274 of a pumpkin we had grown.  I took some lovely photos during October, which despite being very stressful was a month where we made some good memories. Here are all of October’s Project 365:2014 Ideas and Tips.

I started to share some of the photos I had taken when we’d gone out for one of our weekend drives. They mainly were of local churches and graveyards! We haven’t been out for a while, so hope to pick that habit back up in 2015.

My blogger friend Aby awarded me with the Sisterhood of the World Bloggers Award, where I answered several questions she set for me to answer. There was more depression which came out in singular posts rather than across the board. I try and hold it in as much as I can.


For Halloween I designed some new characters to use on my free printables. I posted my final British Lion Eggs challenge recipe using eggs and leftovers. I worked with Crock-Pot and made a yummy spicy pumpkin and butterbean soup. I also did my final post for Cricut Explore and made some Halloween t-shirts.

We got a new car which I was ecstatic about! I was also ecstatic to discover Norpar Barns near us in Essex and the fact that they sold giant pumpkins!

I wrote tips for taking great family photos you’ll treasure for Panasonic and I entered my lamb, spinach and feta filo pie into the Higgidy Recipe Hunt. In another last ditch attempt at losing weight, I started yet another diet plan.

In between there were recipes and Halloween posts, including how to throw  last minute Halloween party and reviews and it ended with my pumpkin carving of Sweeney Todd.

After a stressful October, November shaped up to be equally stressful and where I would say I hit a personal all time low with depression. This reflected completely in my daily photographs and the first one of November was day 305 – Bohemian Rhapsody. Here are all of November’s Project 365:2014 Ideas and Tips.

I spent the start of November trying to catch up with things I didn’t get a chance to write about in October – a few recipes, including a salsa fresca and a slow cooker beef, bean and pumpkin chili con carne, as well as our Halloween 2014 party.

November brings my blogiversary and I celebrated 3 years of blogging with a look back at my blog over the years.

I reached out to my blog readers to cast a vote for The Purple Pumpkin Blog in the UK Blog Awards 2015…results of the public vote are due in December.

I wrote about growing up in a pub, 10 things to do around a campfire and how to throw a Christmas party in association with Homebase. I try and share a song each Sunday and opened up Sunday Sounds to other bloggers to join in. It’s another thing that is a bit of a bust, but I do it regardless! I also reached out to bloggers to submit their posts for my huge Christmas round-ups I had planned for December.  On the back of my growing up in a pub post, I then started a blogger linky called Step Back In Time. I haven’t spent the time promoting that as I should have done, but I plan to focus on it in the new year.

Towards the end of the month, hubs and I went to Taste of Winter thanks to Electrolux (again) and had a lovely day out together. It was just the thing I needed after feeling so depressed. Christmas posts also started to creep in with the start of my gift guides for the festive season.

December on The Purple Pumpkin Blog turns over to my annual series: Create Christmas, which was originally called Cook, Craft, Create: December. Either way, it was a way for me to share an idea a day relating to the festive season. I wasn’t as prepared as I should be this year, a lot going on in my personal life, and I tried to keep up as much as I could. There are a few empty days, which really annoys me, and I am going to go back and fill them in…

As always, the month starts off with a photograph, day 335 – Mickey’s Very Merry Christmas Party. I took the majority of December’s photos for my Project 365:2014 on the 1st of the month, because I wanted to at least be prepared with that. Most of the month was filled with Christmas decorations, and the mood changed slightly after the festivities. Here are all of December’s Project 365 Ideas & Tips.

Day 1 of Create Christmas 2014 was an Olaf printable which has become my most popular pin on Pinterest with something like 25K pins! Crazy or what?! Some of my other favourite posts for Christmas were my printable wrapping paper and tags, leftover turkey, chestnut and cranberry pie, decorating my Christmas cake and another free printable – Frozen cupcake toppers

I asked my fellow bloggers to submit their posts so I could collate all the great ideas out there for Christmas including cupcakes, Christmas cards and homemade gifts. I didn’t do this once a day as I had planned. I took on way too much in addition to the stresses of life. There is always next Christmas!

I had a lot of fun virtual shopping and putting together several gift guides, which would be great for all year around too! In the end I made one for myself, and I was lucky to get some of the gifts on my list!

And that, as they say, is that! Looking back at my blog over the past year, I can see some wonderful things that we did as a family, as well as all the crafts, recipes, photographs and everything else that I shared throughout 2014!

Blogging wise, it’s been my best ever year, with readership, visitors and social media follows growing month by month. I’m so grateful for all the fabulous things that blogging has brought to my life. I know without it, we wouldn’t have been able to do a lot of the things that we do. I work hard each and every day on my blog and it’s so nice to reap the rewards for something I love to do!

And finally, thanks to YOU for reading my blog, for commenting, for emailing, for following, for sharing, for voting… I am pleased to let you know that I made it to the finals again in the UK Blog Awards!

All of The Purple Pumpkin Blog’s 2014 Archives are here

The other parts of this review of the year…