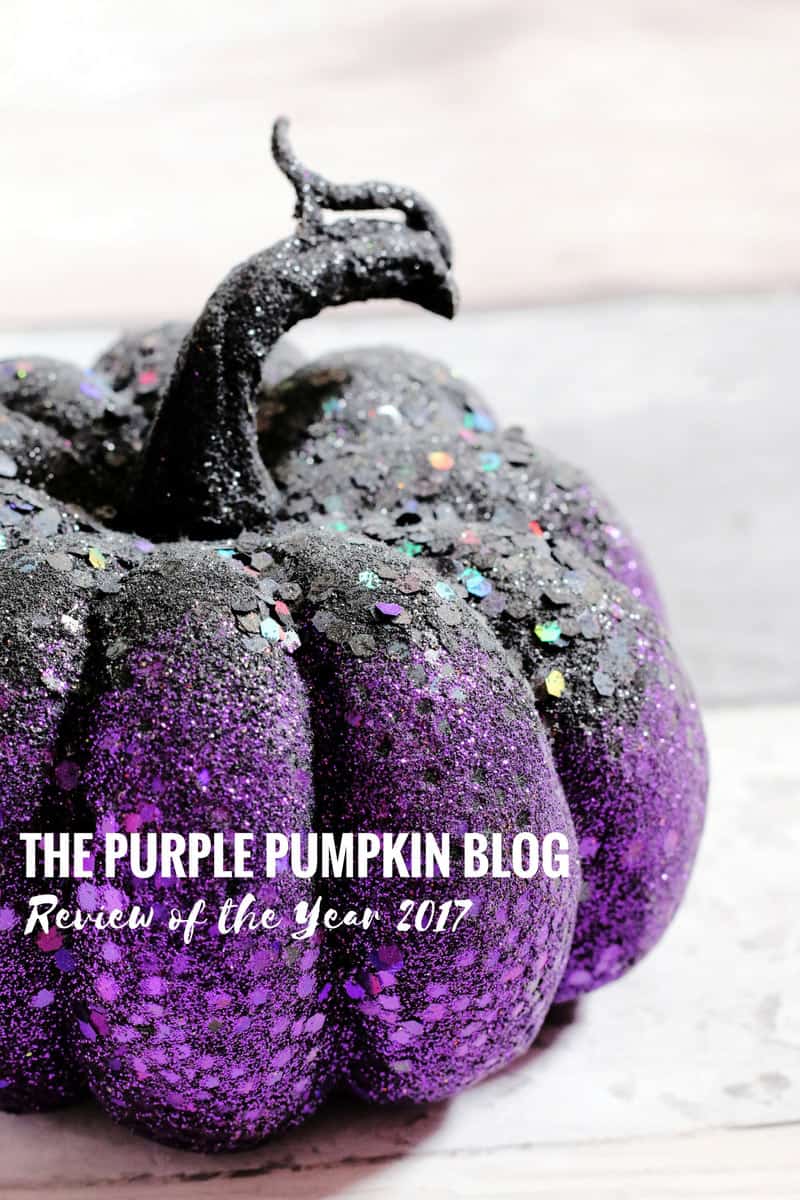 I wasn’t actually going to write this post – 2017 can only be described as our annus horribilis – and I’m happy to be closing the door on this past year. However, I’ve written them for every full year of my blog, and it would annoy me if I didn’t do it. I’m actually writing this at the start of January 2018, but have back dated it to keep it firmly in 2017.

I do hope you’ve enjoyed the content I’ve produced this year, that you’ve tried out some of my recipes, downloaded some of my printables, looked at my photographs, or just read something else that I’ve published on The Purple Pumpkin Blog.

In previous years, I’ve split the year up into quarters, and published four separate articles, but this will be all in one, since I learned how to paginate a single blog post! So it will still be quarterly, but you use the numbered buttons at the bottom of this post to navigate and read through the whole thing. I probably didn’t have to tell you that, but sometimes it isn’t obvious that is what you have to do!


This post contains Amazon Affiliate links. If you clicked the link then made a purchase, a small percentage of the sale price would be paid to this me. It doesn’t cost you anything more but it helps keep the lights on over here!

I started the year following the Slimming World eating plan, and shared a recipe for Slimming World friendly Lasagne. I guess Slimming World didn’t last too long as I was cooking Greek-Cypriot Stuffed Vegetables just a few days later! However, they can easily be SW friendly. Me and diets do not get along well. Mainly because I don’t lose weight fast enough. I want all the weight gone, NOW – and it comes off in dribs and drabs, and then plateaus, and then I move onto another diet. I’ve spent my life as a yo-yo dieter, and that is one thing I have to put right in 2018.

I got ahead of the game in January 2017 and shared a load of free printables for Chinese New Year (of the Rooster). These included printables updated from the previous year, as well as some new ones, included American style Chinese take-out boxes. There was also a new Build-An-Olaf (Cupid) and a Build-An-Animal (Rooster). The latter was promised to turn into a series of animals, which didn’t happen. I’ve popped it on my printable to-do list for 2018.

It looks like I finished my 2015 Walt Disney World Trip Report – Halloween in The Wilderness with Day 17. Realised I hadn’t written a Pre-Trip Planning Report for our 2016 month-long trip to Florida for my 40th birthday – so I wrote one. And I also published the WDW-40, 2016 Trip Report Index for said trip.

2017 saw the re-introduction of Project 365 into my life. I had given it a break in 2016 and did Project 52 instead. I had really missed the daily ritual of taking photographs every day – but as the months progressed, and life got difficult, I was taking batch photos which suited me. January in Photographs

As we end 2017, I have decided to give it a break completely in 2018 and focus on learning a new skill – lettering/modern calligraphy.

Read all of the January 2017 Archives here

February was the month that my little blue eyed boy officially became an adult, and turned 18. I wrote a post entitled 18 Things I Learned About Being A Mum / My Son’s 18th Birthday to mark the event. At the time of writing he’ll be 19 in about 6 weeks time, and as each year passes, I wonder why it all went by so fast. What I would give to relive my life from the moment he was born.

Just the two this month, with another Build-An-Olaf (Love Bug), and a 5 minute planner.

With February having 28 days, I decided to have one day for my son’s 18th birthday photograph, and the other 27 days were split into sets of 9. I chopped one photo into nine pieces, and the whole image was slowly revealed as the days went by. I really love how those particular images turned out! February in Photographs.

Read all of the February 2017 Archives here.

Not so much of a recipe, but How To Make A Chocolate Explosion Cake, which has had 24K shares on Pinterest! I made the cake for my son’s 18th – it was a last minute make and turned out so well! It reminded me that I missed making cakes (did it as a sideline for a few years), but I don’t miss it enough to go back to doing it. I put so much pressure on myself for things to be perfect, I would drive myself batty making cakes and fearing that the customer would hate it (they never did!)

We also started to Meal Prep, which I introduced in a blog post I wrote in collaboration with Dolmio. Recipes included: Spag Bol with Extra Veggies, Make Ahead Lasagne, Chicken Chilli, Chicken Parmigiana, Ciabatta Pizza, and Thin Crust Pizza.

With St. Patrick’s Day on March 17th, I shared 20+ Recipes, and 15+ Crafts & Printables, as well as a Build-A-Leprechaun. Easter was also approaching so I re-shared my Easter Egg Hunt Kit.

I don’t seem to find enough time any more for crafts, but I was sent a mosaic kit which I had fun making and sharing with you. And I re-shared an older Easter craft – decorating eggs with Sharpie pens.

I devoted all of March to photographs of flowers – one of my favourite things to take pictures of. March in Photographs.

Read all of the March 2017 Archives here.