Time for another ‘Flashback Friday’! It’s been a few weeks since the last party I looked back on….I’ve had the photos of this Eurovision Song Contest Party in a folder on my desktop to share for a while now, so let me get sharing!

For those of you that don’t know, the Eurovision Song Contest is an annual competition held between countries of the European Broadcasting Union. I found this out via Wikipedia, and will explain why countries such as Turkey and Israel which are not part of Europe are able to compete. I always wondered why, and now I know! 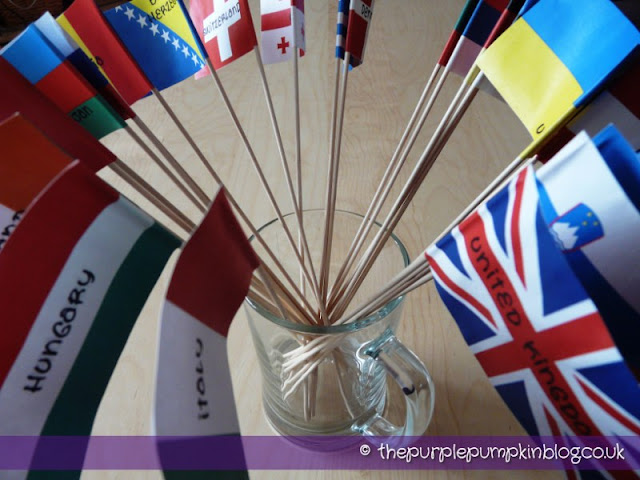 Eurovision is an almighty cheese fest, but it’s something we watch every year…watching as politics marks songs and determines who wins rather than song talent…the UK hasn’t won the Eurovision since 1997, and ‘we’ have won five times in its 56 year history. This year (2012) will be the 57th contest.

Here’s the UK’s winning entry ‘Love Shine A Light’ by Katrina and the Waves. I remember this one, it was a great Eurovision entry!


As I said, we watch it every year, to laugh and cringe at the entries and to watch the ‘nil points’ rack up for the UK…sad! Brits know that the contest is a bit of a joke, and our voice over commentator [was Terry Wogan] Graham Norton is the funniest part of all. Poking fun at all the entries in the way only he can!

Last year I thought it would be fun to have a party with a bit of a gambling edge. Every one put in a fiver each, and the winner with the most points would win the pot.

I made a flag for each finalist and we all picked 3 (or was it 4?) flags each from a bag. The idea being that we would tally up the scores for our countries and the grand total would be the outright winner of the cash. I thought this was fairer than someone picking the winning country and also would involve us all with watching the scores, booing the TV :D Imagine one of us picking out the UK flag? Bwahahahah! It’s a shame that the contest is shrouded with political bias, but it is, what it is. The UK is one of the big four/five in that they are one of the biggest financial contributors to the contest along with France, Germany, Spain and now Italy. So no matter where we rank (even last, like we have done in 2003, 2008 and 2010) we still automatically qualify for the contest ;) 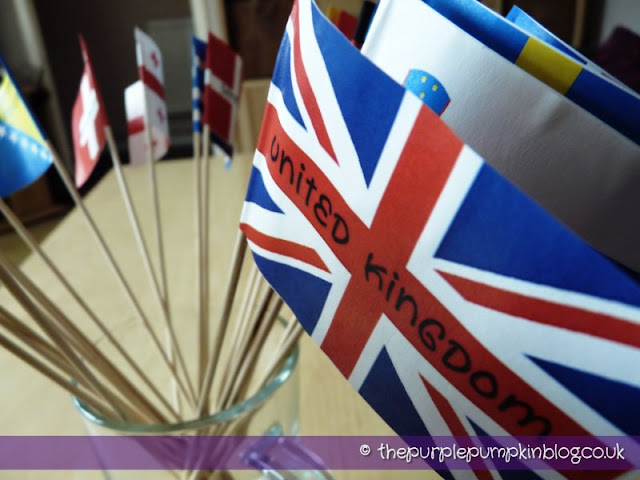 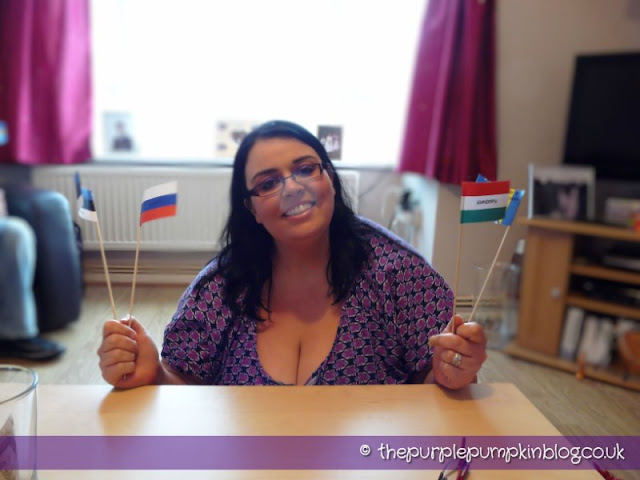 Hopefully you won’t have fallen asleep with my explanation of the Eurovision Song Contest and I can now show you what food I served!

Eurovision is a good few hours long with over 20 countries having to perform their song, along with a short video about the country preceding each song. Then there is the tele-vote which involves close to 50 countries and the tallying up of scores, so when watching the Eurovision you are in for the long haul!

I went a bit nuts with food for this last year – mainly because I kept seeing things, buying them, and then forgetting that I bought them and bought more. Suffice to say, there was enough leftovers for everyone to take home and feed themselves for a couple of days *blush*

The easiest thing to do I thought, was to make up platters of cold cuts and cheeses from a selection of the Eurovision countries, along with bread and some sweet things too.

This looks like Italy’s platter to me…with salami, prosciutto and mozerella among other Italian delicacies.

Another platter that I did of cold cuts was from Germany, with Black Forest ham, frikadellen meatballs, bratwurst and more!

The final platter was from Spain and Portugal with chorizo, machengo cheese and piri-piri chicken pieces.

I also picked up a selection of European cheeses.

I figured everyone could make up their own sandwiches, so I also provided a basket of continental breads including French baguette and brioche, Italian ciabatta, Swedish rye bread and Irish soda bread.

The host country last year was Germany, so I used black, red and gold napkins to cover my counter tops with and laid the platters out for everyone to help themselves.

I made smaller flags and attached them to photo clips to sit next to the platter of food the country corresponded with. And the leftover flags that didn’t make it through to the final were used as a little decoration.

Aside from the platters, you can also see some bowls with olives, houmus and tzaziki (Greece/Cyprus) with some carrots for dipping. And some Lincolnshire sausages (UK).

For desserts I picked up a load of French pastries from Aldi (which is actually where a lot of this continental food came from), as well as a tray of Baklava (Turkey/Greece/Cyprus) as well as some Swiss chocolates and some Swedish, uhm, chocolate covered marshmallow domes (the name of which escapes me!) from Ikea :D

Can you guess where these biscuits came from?!

I didn’t do much for decoration, other than buy some European flag bunting, which was hung quite awkwardly in my living room!

Here’s some of us with our flag pick ‘n’ mix…my (soon to be) brother in law with his and my sister’s flags. She arrived late because of work, so he picked for her…

Not quite sure why my hubby is pulling the sad face – maybe he thought his choices sucked! You can see him with the score sheets that he printed off and mounted on card (we left that till the very, very last minute to do!)

He turned his frown upside down though as he ended up the eventual winner!

And there we have it, my Eurovision Song Contest Party, 2011! I am going to be doing something for this year’s contest which is being held in Azerbaijan. Definitely won’t be doing as much food lol, and desperately trying to think of something a bit different for this one…the platters are the easiest thing to do though…I’ll keep thinking! Stay tuned!