Another post, another theme park! Today, in my Walt Disney World & Orlando Tips series: Epcot! Whenever I read about Epcot on forums, it seems to come out as the least favourite park – however, we really enjoyed it and had a great day when we visited!

Epcot stands for Experimental Prototype Community of Tomorrow and you can read more about it on Wikipedia. Because the park is so huge. 300 acres huge – twice the size of Magic Kingdom…it is often said that Epcot stands for Every Person Comes Out Tired!! Whilst it is a mahoosive park, we didn’t feel any more tired visiting here – I think, because a lot of the rides and attractions are inside, in lovely air-conditioned places, that you don’t go so tuckered out!

Epcot is essentially split in two – Future World, which consists of a variety of pavilions that explore innovative aspects and applications of technology; and World Showcase which contains pavilions representing eleven countries.

World Showcase opens later than Future World, and our plan on our first trip to Orlando was to split our visit to Epcot over two days. You can read more about our experience to Epcot in my trip report and find out what we actually did! 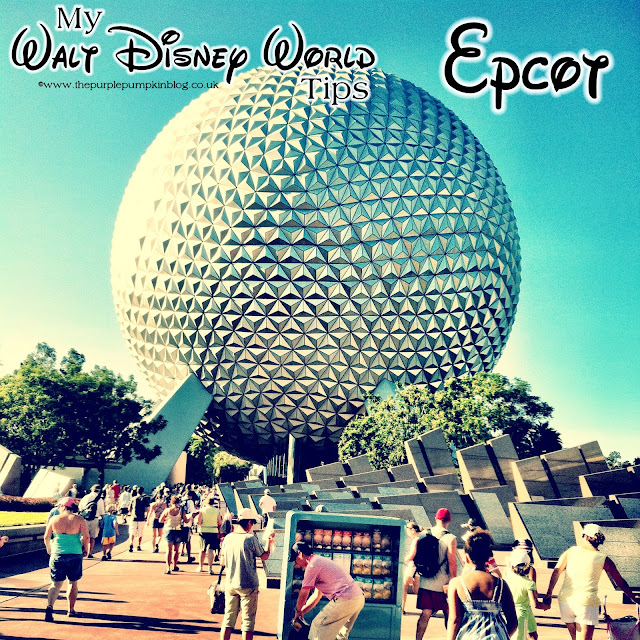 Epcot has an amazing structure at its entrance…the giant golf ball, as I always called it, is in fact called Spaceship Earth and contains a ride! Since it is quite an iconic object, it’s worthy of a photograph, so my first tip here is to take a forced perspective photograph instead of a regular one standing in front of it (but hey, do that too!) There are two very popular rides at Epcot: Test Track and Soarin’, so you’re going to have to make use of FastPass+. Times have changed at Walt Disney World so the crossed out no longer applies! If you want to meet characters at Epcot, there is a handy dandy place that you can get 5 for the price of 1, so visit Epcot Character Spot to meet Mickey Mouse, Minnie Mouse, Pluto, Goofy and Donald Duck. There are Disney PhotoPass photographers, so make use of them and get a photo of all the family together :) And don’t forget your autograph book!

Tip #4 – ride Living With The Land

Epcot is the theme park for learning – and I think it is genius and as such, one of the rides that I highly recommend going on, is ‘Living with the Land’. It’s a boat ride that admittedly I thought started off meh, but by the end I found it so interesting and fascinating that it made me want to go on the Behind the Seeds Tour that is available, and if I can do that this year when we go back, then I will! You get to see all the fruits and veggies that they grow in Epcot, some of which are used in Disney restaurants! It was awesome to see all the different plants – some of which I would probably never see in real life. Ever!

Carrying on with the learning theme, please go and watch Circle of Life next – a short environmental film narrated by Simba, Timone and Pumba from the Lion King. It is very powerful and moving and makes you stop and think about how we, as the human race are treating the world.

Try and find a Hidden Mickey. Hidden Mickeys started out as inside jokes among the Walt Disney Imagineers. A Hidden Mickey is an image of Mickey Mouse concealed in the design of a Disney attraction, ride or resort etc. Here’s just one we found!

Need a rest during the day? Then look no further than Ellen’s Energy Adventure – it’s a 45 minute sit down ride that, while I’ve read some find it a boring ride, we all found entertaining and informative – and it was somewhere to sit down for close to an hour with air-con!!!

Go in the golf ball! It’s not a golf ball…hardcore Disney fans will scold me for describing it as such! It’s a ride called Spaceship Earth – it’s a little dated, but, again, it’s informative and the end is pretty funny. At least, we thought so – I’m easily amused ^_^

All that theme parking making you thirsty? You can try out drinks from around the world at Epcot, for free! Go into Club Cool and try the Beverly. Is all I’m saying :P

This attraction is now closed :(

This is something that we would like to do this year when we go (especially as we didn’t get a chance to last time!) and that is visit each pavilion in World Showcase and try out a cuisine in each one! It does mean probably not eating the whole day to make room for it all, with 11 countries to visit!

Make an Advance Dining Reservation (ADR) for Teppan Edo! It’s good food – all cooked in front of you by a tepenyaki chef. It is pricey, but so worth it! We aren’t planning on going back this year as have reservations for another restaurant when at Epcot, but my mouth is watering looking back at the photographs and remembering our meal there!

If you are into Japanese culture, go into this HUGE shop under Teppan Edo – it’s a delight; and even if you’re not, still go in – it’s such a wonderful shop with so many things to look at and purchase. It was at this point the Orlando skies opened and poured with rain – it was a great place to be stuck inside!

By the time we were in World Showcase the rain was falling. A lot. Our plans of wandering round each country pavilion was out of the question. We wanted to [hopefully] watch the fireworks, so hung out where we could! And so, we sat down to enjoy a funnel cake in the American Pavilion…or one of the other desserts you can buy around World Showcase; including gelato in Italy, lychee ice-cream in China, crème brûlée in France or kaki gori (shaved ice) in Japan. Just researching that lot, well, I totally want to do that this year!!

The evening’s entertainment comes in the form of a fantastic firework spectacle called Illuminations: Reflections of Earth. Watch it! It’s absolutely amazing! We watched the show from the Canada area, since we were stuck in the gift shop there sheltering from the rain!! Are there better places to see the fireworks? Guide books will probably tell you yes, but, since they are fired off from the lake in the middle of the World Showcase, I’m pretty sure everywhere must be a good view!

Tip #16 – take a photo of Spaceship Earth at night

When all is said and done, and it’s time to make your way out late at night, take one last photo of Spaceship Earth all lit up, as you pass by it to exit Epcot.

Typing up my tips for visiting Epcot has got me ever so excited about going back there. I feel that we missed out on so much the first time we went, and I plan on making the most of our holiday when we go again!

Now over to you – what are your tips and tricks for Epcot?