Welcome to Day 86 of 100 Days of Disney here on The Purple Pumpkin Blog! Be sure to check out all of the other posts in this series, and if you would like to share your own Disney blog posts or pictures, make sure you check out our #100DaysOfDisney Link Party!

It’s another Tuesday during #100DaysOfDisney so it’s time for Disney Tasty Tuesday!

On every visit to Orlando, we spend at least one day in Downtown Disney, along with a few other visits for food, or to just hang out. I thought today I would share some of the dining options that are available. Having counted them up on the Disney website, it would seem that there about 35 of them in all!

Our very first Disney dining experience on our first trip to Orlando, was at Downtown Disney when we went to Paradiso 37 for our second wedding anniversary. 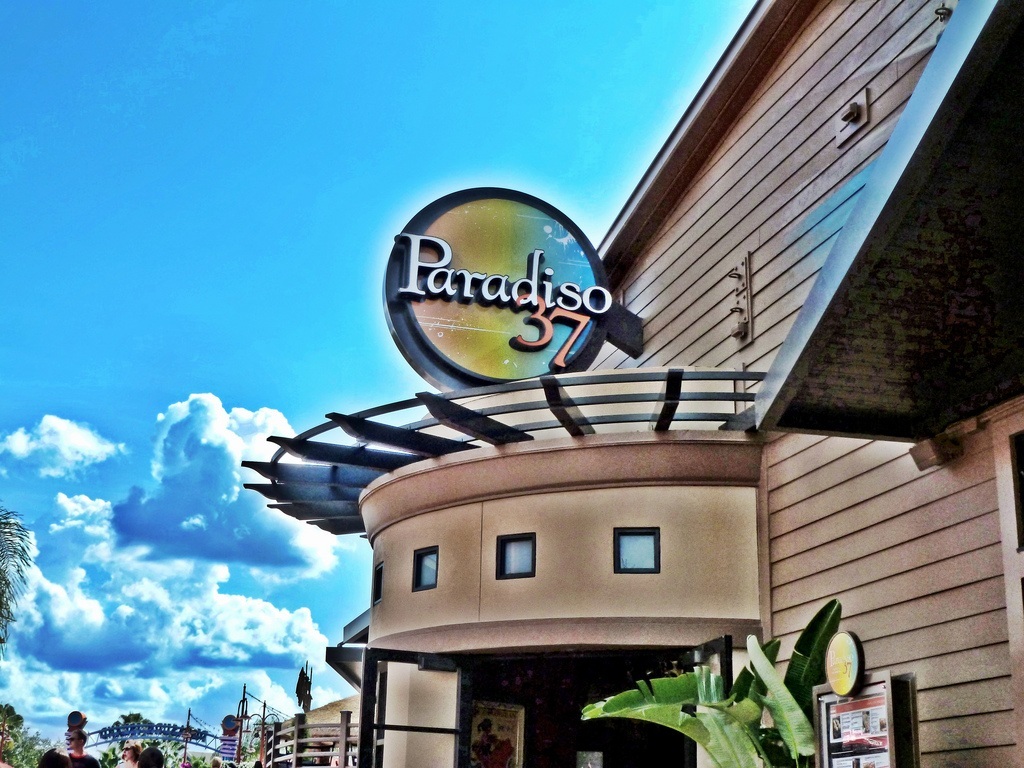 Take a culinary tour of North, Central and South America at this waterfront spot at Downtown Disney Pleasure Island.

We shared nachos, the boy had a cheeseburger, hubs had fish tacos and I had surf and turf (which was lush!) The service was really rushed, which was a shame for our first ever taste of Disney dining. I would like to go back here one day – I bet in the evening it’s quite a lively place. Plus who wouldn’t want to try some shots from the tequila tower?!

We grabbed a sandwich at Earl of Sandwich on that first visit to Orlando too – we needed something to keep us going with all the shopping we were doing!

John Montagu invented the sandwich in 1762; his descendants perfected it! Try the signature roast beef sandwich on hearth-baked bread or any of number of hot or cold gourmet sandwiches. Soups, salads, wraps and desserts are also served.

On our second trip to Orlando, we once again dined in Downtown Disney. We booked to go to the Gospel Brunch at House of Blues which was pretty awesome, we met with our American friends, and the food was delicious!

Listen to the joyous music of top gospel groups as you feast on all-you-care-to-eat Southern-style fare. The buffet includes such favorites as chicken jambalaya and BBQ chicken, as well as scrambled eggs, biscuits and gravy, bread pudding and made-to-order omelets.

As well as the Sunday Gospel Brunch, there is also Crossroads at House of Blues, a restaurant which serves traditional Southern food and international favourites. On Fridays and Saturdays, the atmosphere livens up with blues bands playing live. And there is now The Smokehouse, a quick service window where you can buy pulled pork, smoked turkey legs and beer. Something new for us to try!

We also tried out Bongos Cuban Cafe on our previous trip, which was expensive, but the food was so, so good! We shared a couple of platters full of Cuban food, and we are booked to go back there this year – looking forward to it!

Created by music superstar Gloria Estefan and her producer husband Emilio, this vibrant restaurant is a mosaic of colors and flavors set against infectious music and a celebratory spirit. You’ll feel you’ve been transplanted to a Miami hotspot—if not Havana itself.

Before I carry on with this post to show you some more photographs that I’ve taken of dining locations in Downtown Disney, here is a list of all the [current] places you can grab a bite…

Have you dined at Downtown Disney?
Day 86 of #100DaysOfDisney is done – 14 to go!
Come back tomorrow for another Disney related blog post!