From here on out, my trip reports will get a little sketchy – I didn’t keep them as well as I had done for most of our holiday, and the last few days I’m relying on notes I made on my phone *sad face* It’s a shame in a way because I’ve kept such detail up to this point, and it’s been nice for me to read back as I’ve typed up our report. So my apologies…

We were up and out very early this morning as we wanted to get to Hollywood Studios for rope drop and grab those elusive Fastpasses for Toy Story Mania!

Parked (in Stage it would seem from our photos!) and first in the queue at the gate – it all boded well. Once through the gate we were then stopped by a rope where we waited for them to officially open the park. 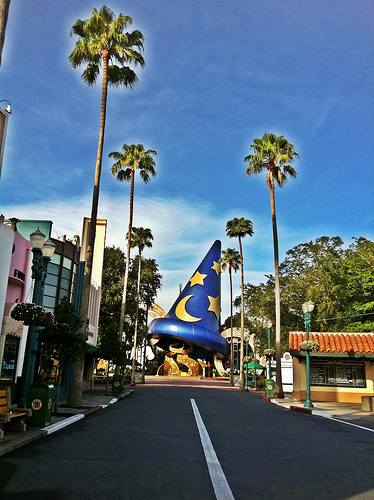 Eventually a couple of guys came out on a truck with a video camera and explained that they were making a promo vid and gave us direction on what to say and do – insisting that we walk and not run! I don’t know if this is what they normally do for rope drop, but I was disappointed not to see characters!

Once over the rope, it was a very controlled, brisk walk to Toy Story Mania where the majority of the crowd went. Steve grabbed Fastpasses whilst Liam and I went in search of the end of the line thinking we could ride it once and come back later. Steve soon caught up with us and we went to join what I thought was the back of the queue, owing to the huge gap…only to berated by a very rude and vocal New Yorker. She didn’t know I was a very vocal Londoner, so I politely told her to chill the smeg out! Don’t leave such a huge gap next time love!!

Anyway, no harm done and with the wonderfully themed queuing area the twenty minutes or so that we had to wait went by very quickly.

Now this ride, for us, DID live up to the hype. I can see why people queue up for a long time for it – that said, I probably wouldn’t queue up for two hours for it!

It was such fun and I’m glad we were able to ride this one twice. Once you have the technique down on the shooters, which are operated with a pull-string-knobby-do-hickey it’s easy as throwing hoops over little green aliens ^_^

From a plus size point of view, you are seated two per side (there are 4 people in a car, back to back) and from what I remember you pull the shooter towards you which acts as a lap bar – they are individual so if one of you is smaller than the other it doesn’t matter. I was fine with it! The ride does whip you about a bit as you make the turns to each game!

Across the way from Toy Story Mania is the meet and greet for Buzz and Woody. Now, this was a LOOONG wait. 45 minutes O_o But we all wanted to meet these characters so hoped it wouldn’t take too long – we were wrong! As you line up you have photo ops with cardboard cut outs from the movie, so that passes the time, but you are kind of crammed in a bit so it can be tricky, most people were aware that others wanted to take photos so they got out of your way.

Out of all the characters we met, I think these two were the weirdest to not hear speaking. You are so accustomed to their voices so for them to be silent was just, well, odd! Again, when meeting these guys, just as it was our turn, it was their break…and when they came back we posed for photos and they signed our autograph book, well, Buzz stamped his name!

Next up we went into the Animation Courtyard to meet Pooh and Fantasia Mickey. Shortish lines and I just love meeting the characters! I ♥ Pooh and told him so lol. I love how when you tell them things they go all giggly and shy – precious!

We then saw that The Incredibles would be appearing soon, but enough time for us to go into the Animation Academy where we drew Minnie Mouse.

Liam isn’t a confident artist and the lady was going much too fast for him to keep up. He stared at a blank piece of paper, which was sad as I’m an artistic person and this part of me didn’t rub off on him, no matter how I hard I tried to get him interested *sad face*

I think my Minnie turned out nicely and I’m proud of it. Not wanting to get it squished, we went into the gift shop next door and I bought a poster (with an ulterior motive!) which came with a tube to keep my art work safe as well ^_^

We then met The Incredibles who were great. Mrs Incredible was so motherly towards the kids, a bit hard to describe, but it was lovely to see. More autographs and photos before going to watch a film about Disney animation – can’t find what it is called on the map – but it’s the one with Mushu.

We missed Lights, Motors Action! Extreme Stunt Show on our last visit to Hollywood Studios so we rushed over there to catch 1:20 showing of it as the later one would clash with Beauty and The Beast which we also wanted to see. It was pretty packed but we managed to find some seats. There was a family in front of us who were putting their feet up on the bench in front of them. A couple came up and asked if they were taken, to which they replied that they were…they weren’t – it was a place for their feet and popcorn as no one else came and sat there. I thought it was a bit off as the place was packed and people were trying to squeeze in where they could. Oh well…

A very action packed show and very impressive. We all enjoyed it and am uploading videos to YouTube…Video 1, 2, 3, 4, 5 and 6!

It was cool to see Lightning McQueen as part of the show which I wasn’t expecting. This one is definitely worth a watch if you’re into action sequences!

We then went to the Backlot Tour (another thing we had missed before) which was very interesting. The part in the canyon with the water and explosions is awesome! A million times better than Disaster at Universal!

A late lunch at Pizza Planet where we had, you guessed it, pizza! Actually, we got a mix of things including pizza, a chicken salad and a meatball sub. The pizzas/sub also come with a tub of Caesar salad so there was a fair bit of food, but the pizzas are pretty small and Liam ended up having two. With drinks and a Mickey shaped rice crispy treat we spent $50 in here.

The service was grim – both at the till and waiting for our order at the counter – very, very slow. And they pile the food high on one tray so I had to make sure I didn’t lose my footing holding that bad boy! There was no room inside to sit down, so we found a table outside and had our lunch out there.

Liam enjoyed the pizzas, and I had the salad which was really nice, LOTS of chicken in there which was a welcome change as you often only get one or two pieces in those pre-made salad type bowls. Steve munched on the sub which was also fine. Decent enough food, although Steve and I were disappointed it was a buffet like it is in Paris’ Pizza Planet!

Nearby was a shop that Liam had a nose in whilst we finished off our food and he proclaimed that he would like a Chip ‘n’ Dale plush, which after that came everywhere with us! I also bought my Minnie ears which were also worn continually from that point on ^_^ We then saw a band called Mulch, Sweat and Shears setting up, so stood and watched them for a bit before going back to re-ride Toy Story Mania which was again great fun.

On our way to Toy Story Mania we saw Sully from Monsters Inc and promised Liam we would go back afterwards to meet him. When we did go back, he wasn’t there, it was Mike Wazowski. I asked the CM when/if Sully would be back and she replied (unhelpfully!) that he was at a monster convention and didn’t elaborate further -___- Oh well, photos taken, but no signatures since Mike can’t hold a pen!

Then onto Walt Disney: One Man’s Dream where we first wandered through the exhibition before watching the 15 minute film which was nice and brought a little tear to my eye.

Finally we went to watch Beauty and the Beast which was wonderful. Another favourite film of mine, but they skimmed through pretty quickly and missed bits out leaving you a bit lost I think if you haven’t seen the film!

Whilst sitting in the auditorium, there was a very loud huge clap of thunder which sounded very ominous, and the lady in front was looking at the weather warnings about the impending Hurricane Irene…this started freaking me out some what as I was concerned about its direction and how it might affect us on our journey home in a few days time. Not being able to get wi-fi in the parks (even though Steve was sure he read somewhere you could, it’s a lie!), I wanted to go home and check out the weather reports.

By now the rain had started falling, and having had enough of getting wet at parks, we left to go home. Not fancying going out, we ended up ordering (more!) pizza for dinner that night from Diromios – a leaflet was in the drawer in the kitchen, so spent maybe $40 and had it delivered. I ordered a cannoli (dessert) as always wanted to try it – it was blergh! The pizza as a whole wasn’t much to write home about and looking back, we should have just gone and bought one from Walmart or something! Pizza is so overpriced I don’t even know why we bought it lol!

After that, it was the rest of the night with me freaking out about hurricanes before bed and up early again for Discovery Cove!

Read the next day:Day 20 – Swimming with Capricorn: Discovery Cove