You’re probably wondering what on earth today’s title is all about.

You could be thinking it’s about these furry mammals: 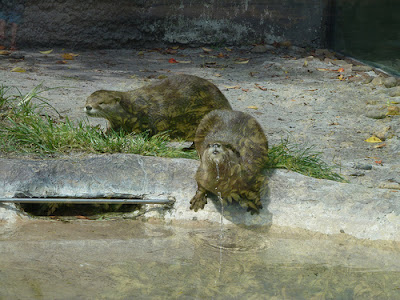 But no, today was a day I’ve been looking forward to for months, the day I get to meet one of my online friends, Thom, in real life! Yay!


We met through a forum for Farmville (of all things lol!) and there were a few of us that hung out in the Off Topic forums, dubbing ourselves OT’ers…which then turned into Otters lol. We all became good (albiet long distance!) friends and chat on Skype as well as via Facbook. I’ve been lucky enough to meet a couple of Otters, one who lives not too far from me and another who was stopping in London on her way home to the US.

Thom lives in Florida, and we arranged to meet towards the end of our holiday as it fitted with both our schedules. A bit of texting back and forth and we decided on Bahama Breeze as we’d had a nice meal here before.

We pulled up outside the restaurant at about 1ish and I texted Thom to see if they (him and his wife) were there yet and if not, we’d wait inside/get a table. Turns out they were parked in the car next to us and he’d texted at the same time saying “is that you” lol. So we all got out and it was a big hug for me from him as he’d promised from when he talked me through some rough times on Skype. It was like we had been friends forever rather than the first time we met which was lovely. After intros to the family, we went inside and were seated.

It was nice to visit a restaurant with natives, as their way of ordering is so different to us Brits, it’s a bit hard to describe, but it’s different lol.

We all decided on appetizers. I again went for the firecracker shrimp which didn’t disappoint. This is a photo from the first time I had them, but here again for those who didn’t read that report! Liam had the same starter as before too of chicken sliders. (Ditto on the photo) Steve had Caribbean patties which he enjoyed. Our friends shared quasedillas which seemed to go down well too.

Chatting away, with me doing a LOT of talking, meant I was very slow in eating for which I apologised. Everyone had finished and there I was still sitting with a big bowlful of shrimp >_<

Liam and I both had burgers for our main (not very Caribbean I know lol), but huge burgers and very tasty.

Steve had fish tacos with a side of rice (with black beans I think) which he nommed up. Fish, unknown!

Thom and his wife had salads (tropical chicken and shrimp), and Thom kindly offered his plate for a photo since he knows that’s what I do! Both well received.

Again with me being Little Miss Chatterbox, my burger went untouched for a while – well I had taken a bite from the other side, but the waiter didn’t see this when he seemed to panic and ask if everything was okay with my meal. I assured him that everything was absolutely fine.

We all exchanged stories about our different ways of life, schools, jobs etc and we were invited next time to come and visit them in Cape Coral where they live. They complimented my Liam saying what a charming well mannered young man he is, which was a nice thing to hear from someone who have never met him and I had a very proud mum moment!

A bit of a niggle with the service here, as I said, I was very slow in eating on this day, and my son had commented that he wanted the chocolate dessert he had before (the name alludes me at the moment), and the waiter heard this, and took the order from him and everyone else whilst I was still munching on my chips…I thought this was a bit off, as did everyone else, but we didn’t make a fuss.

I ordered the Bananas Supreme which was banana bread with sliced bananas, almonds, caramel sauce, ice-cream and whipped cream and was heavenly!

Steve ordered the warmed pineapple upside down cake, which he said was equally nice.

I have no other photos of desserts so can only assume our friends had the same as us, or not at all!

We sat chatting for another good hour or more, and I commented if it would be okay with us sitting here with just coffees, to which they assured that it was fine – had they needed the table they would have soon booted us out!

By now it was late afternoon and our friends had to head back home as they had a few hour drive in front of them and work the next day.

Thom very kindly paid for the bill and wouldn’t accept anything from us, insisting that we were their guests, so I don’t know how much the total check was for those that were wondering how much you pay for 5 people in Bahama Breeze!

We all took photographs to keep the memories alive and to show the rest of the Otters that we did meet – it’s quite often ‘pics or it didn’t happen’ in our group lol.

We bid farewell to Thom and his wife, knowing that today’s meeting was bittersweet as won’t be seeing them again for a few more years…

After our goodbye’s we popped into Super Target next door as I needed a couple of things I was running out of and couldn’t eek any more from the well squeezed bottles of toiletries. I also needed another notepad as the one I brought with was now full up with my hand written trip report!

Back at the villa, Liam had a play in the pool, whilst we relaxed in the hot tub…certainly the life!

I had ended up bringing home my banana dessert as I couldn’t finish it at the restaurant. I yummed it up before we all hopped into bed, ready for our re-visit to Hollywood Studios to get there for rope drop and bag us some Fastpasses for Toy Story Mania!

Read the next day:
Day 19 – The Sequel: Hollywood Studios Revisited and Pizza Planet