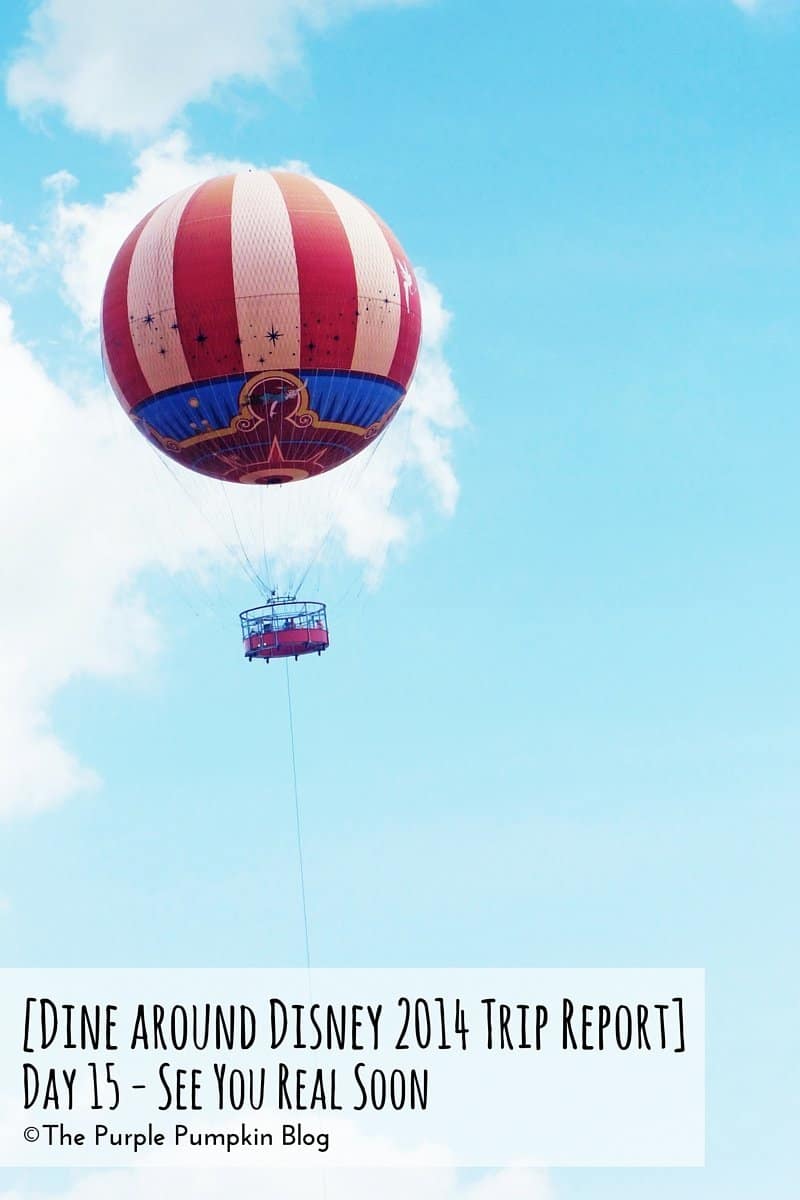 Can you believe it? I’m finally on the very last day of 2014’s trip report – Dine Around Disney! And the title couldn’t be more apt as I write this, as we are indeed seeing you real soon Walt Disney World – in 8 days!

So, since I really want to get this written and finished, it may be very sparse on words!

Our day started off with us doing one final sweep of our room to make sure we didn’t leave anything behind, then loaded the suitcases into the car to drive down to the reception area.

We went into the Conch General Store and spent the last of our snack credits on character cookies, kettle corn, cotton candy, and a few other bits. We did try to see if we could exchange our last 2 remaining dining credits for snacks instead, but they wouldn’t allow us. I know this can be a bit hit and miss. In this case it was a miss, but not the end of the world.

As our flight wasn’t until late afternoon, we were able to leave our suitcases safely with bell services, and then drove down to Downtown Disney for a spot of lunch at Crossroads at House of Blues. I love the style of HOB, we came here for the Gospel Brunch in 2013 and had a great time. We didn’t book an ADR for this as we figured it would be busy for early lunch, and we were right, walked straight in.

We were seated in a booth and given the menu to look at. Our waitress was very chatty and friendly, and gave her personal recommendations from the menu.

When it comes to the Deluxe Disney Dining Plan at a table service restaurant you are entitled to one appetizer, one entrée, one dessert and one non-alcoholic beverage per person (usually refillable), for one credit per person.

We ordered a selection of appetizers to share between us. Spinach and artichoke dip is one of our favourite apps, and we seek it out whenever we can! Some are better than others, and this one was good and a very generous portion!

Us: Spinach and Artichoke Dip – A blend of cream cheese, mozzarella, asiago, chopped spinach and artichokes, freshly baked and served with pita chips ($10.99)

Both the boys had a burger. I decided on lobster mac ‘n’ cheese. From what I remember, it was quite watery, and not as creamy as I was expecting. I do actually remember feeling a bit disappointed as it was our last meal of the holiday, and I thought I should have ordered something else!

Me: Lobster Mac & Cheese – Tender poached lobster meat in a rich creamy cheese sauce made from scratch and topped with crunchy panko breadcrumbs ($21.99)

Because of my not as good as expected main, I ordered a lush dessert, the boys had “just” ice cream.

Crossroads at House of Blues

We paid our bill, and bade farewell to our last dining experience on the Deluxe Disney Dining Plan. Looking back, as I’ve typed out these trip reports, I see we had some fabulous dining experiences that we probably wouldn’t have paid out of pocket for – especially the signature restaurants. For us as a family, we made it work, and wouldn’t hesitate to do it again when staying at a Disney Resort, in fact, we have upgraded to deluxe from the free dining plan for 2015.

Whilst you are entitled to three, 3-course table service meals per day, and 2 snacks per day, per person, we didn’t use them this way. We mainly had one breakfast, or if we didn’t, we’d have a lunch (table or counter) instead; with a 2 point signature restaurant or dinner show to make up the points for the day. We certainly didn’t have 2 snacks a day each either – most of them were used on snack items we could bring home to enjoy later, or to give as gifts – things like character cookies, popcorn, and bags of candy.

All told, we used all but 2 of our dining credits, and all of our snack credits.

Having done our sums before we went on this holiday, I know that we spent well over $2000 on dining, snacks, and food shopping for the villa on our previous holidays, so, once again, yes, the Deluxe Disney Dining Plan is worth it!

Yes, we had to pay tips – a total of $634.61, which works out roughly to $45 a day. But considering our savings, this feels like not much for the dining experiences we had on Disney property. I know people say “but what about tips” when arguing the toss against DxDDP, but our reasoning is, is you pay tips anyway, so what’s the big deal?

The Deluxe Disney Dining Plan is not for everyone. There is a lot of planning and logistics involved! I made sure that breakfasts were early, and dinners were late, giving us enough time to digest the food, and not feel like we were overly full all of the time! In past holidays, we pretty much always had breakfast and dinner – and usually a 3 course one at that, so this was no different for us. Most dinners were outside of the parks, so we didn’t feel we were tied to being in a certain park, on a certain day, so meant we could be flexible if plans changed.

Now that I’ve waxed lyrical about the Deluxe Disney Dining Plan, a few more photos of House of Blues, and Downtown Disney (formerly known as!). We also nipped into DisneyQuest for a play about on the arcade machines. And a good thing too, as it’s closing down – boooooo. It’s such a shame they made this decision, whilst DisneyQuest is/was in need of a dire update, it was so cool to be able to go in and play on the retro arcades, and a great place to spend a raining morning/afternoon, which we have done in the past.

Another farewell to Downtown Disney, the sad drive back to Old Key West to check out. pay our bill (we charged everything to our room – tips, out of pocket snacks, merchandise etc), and to pick up our suitcases, for the even sadder drive to Orlando International Airport.

We followed the signs to the car hire return lots, and handed back our car. A member of staff helped us with our bags by loading them onto a trolley and wheeling them down to the airport for us. We paid him a tip, then quickly weighed our bags to make sure we had got it correct with our travel scales. We did – phew! All checked-in, we went off to spend the last few dollars in our pocket on some magazines, which is like airport tradition for me now!

Eventually, we went off to go through security, which had a long old line – nothing new in Orlando! I remember being stopped (again) on the scanner machines… they really don’t like me. Then we caught the monorail over to the gate to wait for our first plane home. We flew with Delta, and were stopping for around 3 hours in Atlanta.

I know that we bought some dinner at Atlanta airport, but can’t remember what now – it was probably just a burger or sandwich. Our flight home was then being called, so we boarded the plane, and settled in for the night. I know that we try to sleep on the plane when we can, I can’t remember what we watched on the IFE, or what we had for dinner – but I do seem to have a photo of the snack breakfast!

Our indirect flights with Delta were very good – both ways. The planes were comfortable, and the service was top-notch. If the price is right, we would fly Delta, and indirectly again in the future. For our upcoming trip, the price was not right though!

We landed at Heathrow around midday I believe, and I must have taken a final snap of the plane that got us home. It felt weird to be landing at this time, as in the past we have landed early morning. However, this worked in our favour, as the jet lag didn’t seem so bad this time around.

After going through security and customs, I phoned my dad to find out where he had parked, and we eventually found him. Cramming the extra suitcases into his car, we started the drive home. The first thing we always do is unpack, mainly to check that nothing was broken in transit, and to see if our cases were inspected – which they were! I reckon it was the toy sword we were given at Cinderella’s Royal Table that triggered it! With all of our stuff everywhere, we go through, and reminisce about our holiday, which had come to an end for another year, and try to stay awake as long as possible… only to dream of another holiday to Walt Disney World!

Read about the day after:
There is no day after! This is the last day of my Dine Around Disney 2014 trip report. You can go back and Read ALL the days, or you can go and read one of my other Disney trip reports:

Or you can read my Halloween in the Wilderness 2015 pre-trip planning report here! and I hope it doesn’t take me over a year to write the trip report for that one, like it did for this! Thanks for reading!