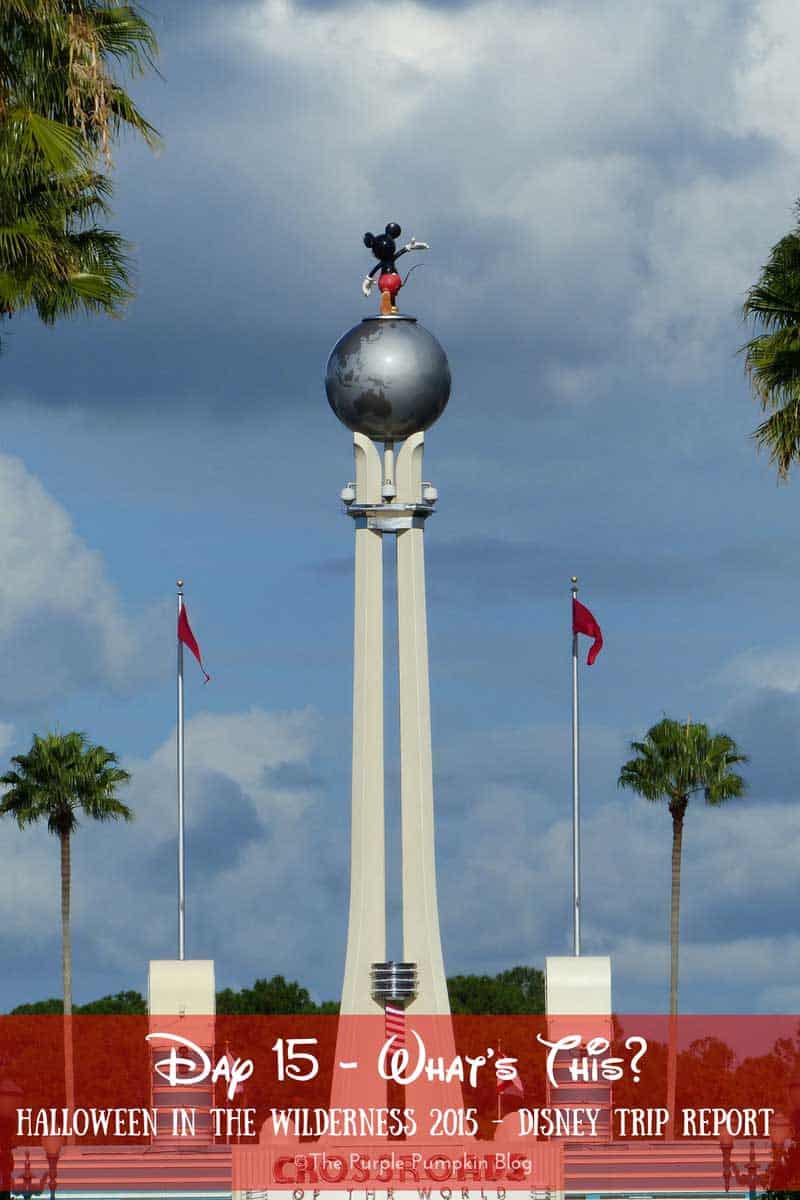 This time a year ago we were on holiday at Walt Disney World – and I can’t believe I still haven’t finished this trip report. I have a new one that I must start writing, but I want this one finished first. To that end, I’m going to rush through the remaining 3 days (including this one) so that they are done, and I can put my Halloween in the Wilderness 2015 Trip Report to bed.

The easiest way that I can do that, and have been doing that with the past few days of this report is to keep words to a minimum, and just have the photos which can tell their own story. I’ll mention anything worth noting, and details about the meals, as were on the Deluxe Disney Dining Plan for this trip.

Looking back at the photos from this day, I see there was a few “lasts” not only for us, but for Disney Hollywood Studios itself. They include Lights, Motors, Action, Extreme Stunt Show, which has now closed; as well as The Osborne Spectacle of Dancing Lights, which was lit up for the final time in 2015. And the whole Streets of America is now gone too. This is all to make way for the new Star Wars Land, and Toy Story Land that will be coming to the park in the future.

We are the most sad for the Osborne Lights though – it was our first time seeing them, and so sadly our last. They were such a spectacular sight to see! So full of wonder and magic – it really did feel like Christmas as we walked past the buildings adorned with millions of twinkling lights. Photos and video, really do not do it justice at all.

But lets go back to the beginning of this day, which started with breakfast from Roaring Fork – the Counter Service restaurant at our resort, Wilderness Lodge. We actually brought it back up to our room as it was a lazy morning.

When it comes to the Deluxe Disney Dining Plan and breakfast at a quick-service restaurant you are entitled to one entrée, and one non-alcoholic beverage for one credit per person.

Now, I am guessing that Steve paid out of pocket for the pastries, I really cannot remember, and don’t seem to have a picture of the receipt (which is how I keep track!). And the price I have written down, doesn’t seem to match, so who knows what went on here with this!  All I can say is that a counter-service or table-service breakfast on the Dining Plan isn’t good value for money – a Character Breakfast (which are usually a buffet) are much better value. I’ll write down the figures I have and update it if I ever find the receipt.

Me: Bounty Platter – with Scrambled Eggs, Pancakes, Potatoes, Bacon, Sausage, and a Biscuit ($9.99)

Him: Breakfast Croissant – with Bacon, Egg, and Cheese. Served with Potatoes ($7.69)

After breakfast, we headed over to Hollywood Studios. It was also here that my back couldn’t take it any more, so we hired an ECV for me for the day. The relief was so welcome, and I was able to get around so much easier and without pain. We had to pay a $20 and it was $50 for the ECV. Once you have paid for the scooter in one park for the day, you don’t have to pay again if you park hop – you just leave a deposit again.

Getting around the park, into stores, and onto rides isn’t too problematic at Walt Disney World – it is very accessible throughout. But I’ll go into all of that in more detail in my next trip report, as I hired an ECV from a offsite rental company for the duration of our trip.

Seeing Hollywood Studios without the Sorcerer’s Hat was very strange; it felt so empty without it. I know that fans either loved or hated it – we loved it, because it was all we have ever known. But seeing the Chinese Theatre was nice.

The previous year, Lights, Motors, Action, Extreme Stunt Show was cancelled midway through the show, due to bad weather; so we made a point of getting to see it this year. Good thing too, as it’s now been shut down, to make way for new areas of the park. There is still a version of this at Disneyland Paris (where it originated) but we’ve not seen that one. Due to my ECV use, we were guided to the lifts, which took us to the upper levels of the seating. (Also getting to see what remained of the old Backlot Tour – which has also closed down.)

We had a great seats, slap bang in the middle, which was perfect for the huge fire stunt finale. I’m so glad I got an awesome photograph to accompany the last time we saw Lights, Motors, Action!