After the Mo’Rockin’ performance, we walked back towards the Japan Pavilion. I wanted to get a Kakigori (Japanese shaved ice) as it was on my Disney bucket list, and since it would be the last day visiting Epcot this year, it had to be done! 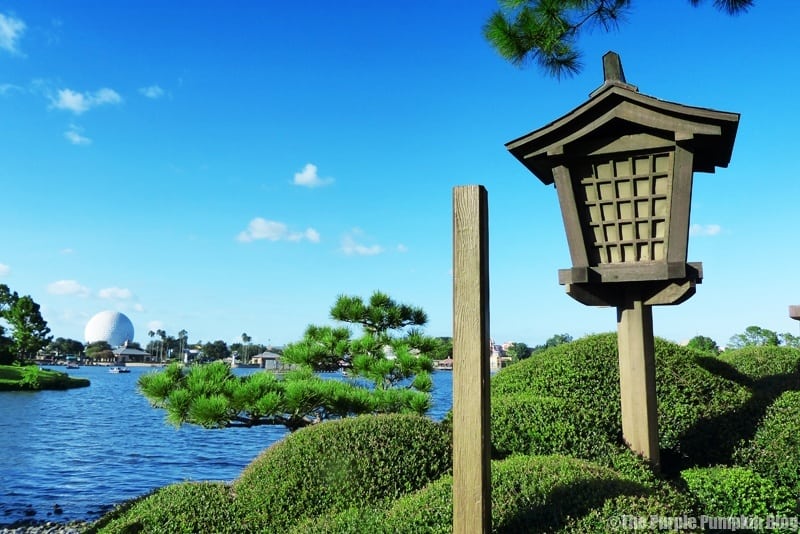 There are several flavours of kakigori available: rainbow, strawberry, melon, cherry, and tangerine. You can also add on a sweet milk topping for an extra dollar. I got a rainbow flavoured kakigori, which is essentially a Japanese Slush Puppy! Kakigori are available for 1 snack credit on the Disney Dining Plan, or cost $3.75.

Back in The American Adventure, Liam decided he wanted a funnel cake – fruit salad and some ice-cream didn’t quite hit the spot earlier! Funnel Cakes are not on the Disney Dining Plan, so we paid $8 out of pocket for this chocolate funnel cake with powdered sugar.

We did buy some other snacks and drinks through the day, which I’ll put together here, and cue the crappiest photo I’ve probably ever taken of a pumpkin shaped rice krispie treat!

By now it was early evening (around 7pm) and we wanted to start making a move towards the exit, as we were headed to Disney’s Hollywood Studios to watch the Frozen Fireworks, which we hadn’t yet seen.

We took the boat back across the water, and walked back into Future World. Naturally, we had to do two of the things we [I]always[/I] do at Epcot – forced perspective photos with Spaceship Earth, and actually ride Spaceship Earth! The line was non-existent, so we walked right on. We also did our usual, pull the stupidest face possible for when they ask you to pose for a photo!

Sad to be leaving Epcot for the last time on this holiday – it’s a park that we love as a family – we took some selfies, all without the use of a selfie stick – much more fun, trying to fit us all in and Spaceship Earth!

By the time we exited Epcot, drove to Hollywood Studios, parked and got to the entrance, it was 8:45pm, so just in time for the start of the Frozen fireworks! We left Epcot at around 8:15pm, just to give you an idea of travelling time (by car).

It was, as you can imagine, very busy by the time we arrived, with Hollywood Boulevard packed. We decided to just linger at the back (also giving us a swift exit when the fireworks were finished).

The total fireworks show was around the 14 minute mark, but the first 6 – 7 minutes were taken up with a pre-show, which from far back I couldn’t see, but hubs zoomed in on the camcorder. Cue lots of little kids sitting upon adult shoulders so they could catch a glimpse of their favourite characters! The fireworks were set to the songs from the movie.

During the fireworks, they paused to introduce Elsa, which, looking back at the video, is actually quite annoying! But the final song – Let It Go – of course, was fab, and the fireworks pretty spectacular, made even more awesome by the addition of “snow” falling!

I’ll finish this trip report off with the photos I took, and a video of the fireworks (skip to 6:40 ish for the start of them).